Bismuth - No ICO, No Premine and First Python Coin!

Lately we have loads of ICOs, many good and many crappy ones. Theres literally 100s of them and when i find something worth im trying to post about it.

But now this is another case. Bismuth is a fully new chain, build on Python, the coin had fair launch where people could mine it (and its still mineable), had no premine and just rocks as a concept. 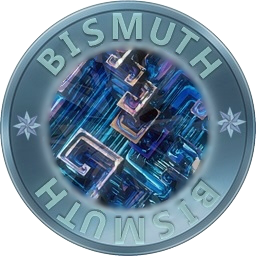 So the dev (who is in crypto since long time) looked at all coins, took what was best in them and recoded everything from the ground with his base idea.

Bismuth is a decentralized transaction platform focused on modularity and open source approach. It comes with default decentralized applications and tools out of the box, not only to be used by everyone, but also to be hosted by anyone. These applications are supplied as interpretation engines, which prevents blockchain bloat. Inspired by Satoshi’s whitepaper, Bismuth also offers optional hyperblocks as a pruning mechanism, a system which greatly reduces disk space usage and increases execution speed.

So to note TOR is already implemented by proxy, it has Decentralized Applications creation option, right away there is free dAPPS to use: casino, pool, transaction mixer (for anonymity). I was looking at this coin since some time but until trading began we couldnt know how its gonna be, especially that codebase is new. Cryptopia for now is the only exchange capable of adding it and seems floor is at 20 000 satoshi right now - which looks cheap for fully new code-wise coin and concept.
Chart also looks not bad.

Find Out More and Test

Check out the Bismuth documentation at http://bismuth.cz/doc/

thank you for the documentation

wow, this one looks really nice. good to see a python blockchain

I will research this more. thnx for the heads up

Many thanks for this article, I'm really glad people like the concept

There is one thing I'd also like to mention especially here on Steemit.
Recently there has been quite a lot of discussion about Smart Media Tokens

The initial 2017 roadmap has been almost completely finished and updated in September — Bismuth will have it’s own on-chain language, which will enable generation and transfer of secondary tokens for everyone, and eventually execution of smart contracts as we know them.

Here is an interview with lead dev .

This comment has received a 0.49 % upvote from @booster thanks to: @khaaaarl.

be cautious in investing

you dont have to invest, you can ie mine it, its CPU based

Will it also need extra mining hardware like bitcoin needs. Is it possible to mine with pc?

No extra hardware, it is ASIC resistant.
You can mine in any PC using CPU, so far.
GPU mining will be implemented in future.
Which will render CPU mining almost pointless, so mine while it is still profitable.

so how do i mine this please?

Always love your posts @kingscrown and the 20,000 satoshi is quite cheap especially when you can get it for free using faucets. Not harm in trying and no loss especially when using the information you gave and how to get free satoshis. I will give it a try and that will be my first trading experience.

This looks promising from a dev point of view.
The rest is up to the market adoption now. I'm all for free and fair token distribution.
This looks hot. Let's steem and resteem it. ;)
(I'm new here do people say that?)

Decentralized currency is definitely a boost to the economy and for self earning. What concerns me is the governments. As they are used to centralized systems. Do the government have the power to ban such currencies completely? Requirement of mining hardware requires initial good investment though

They do not have the man-power to stop cryptos and Decentralized apps. They would have to raid EACH node (Miner) on the network, SIMULTANEOUSLY.
For this they will need a person at everyone's house, at a specific day/time. Which is impossible. Yes there will surely be some conflicts when the Governments try to come up with new ways to make money.

But at the end of the day, its up to the people, whether of not they want to use cryptos/dapps/DAOs.

Goverments (i'm primarily speaking from EU point of view) are actively working on ICO - BC regulations. The lack of correct financial instrument or financial definition is letting ICO's blossom in status quo atm, but this will change in couple of months.

Haha people say many thing :) Thanks for resteem!

Why is this tagged "Bitcoin" when it is nothing about Bitcoin?

It's tagged Bitcoin so that you could find it easily.
And you're here now. And now you know about Bismuth. You should be thankful I guess.

also it trades vs BTC mostly :)

how would i resteem this post please.. am kinda just getting in here, would not use the word "new" hehehe

taking a look at that right now ! : good work KC bizmuth is one of my favourite minerals for it's whacky hyperspace looks. I was disappointed to find out that most specimens (crystals) are industrially produced Yeah looks amazing, you can make one at home ;)

There's a reason for the EVM and other crypto-specific environments/opcodes. Python is not resource optimized in any way. I can't imagine that Bismuth will be able to handle scalability while maintaining blockchain security if Python is the native language.

Currently, ICO's were flooding and sprouting everywhere like mushrooms and im confuse which is which to invest. So i decided to just concentrate steeming since this one is already tested and having a strong foundation. And whether we like it or not it is growing everyday.

Anyway, thanks @kingscrown for such informative article about ICO's and im following your next article since i learn so much from you buddy.

Good thank you very much

Thanks for the information. I learned a lot!

Looks cool anyone here going to mine it?

I checked about this coin and it looks realy interessting. Today it has a price around 0.84$ and is on rank 299 in the coinmarketcap. Maybe in future we will see more coins which are build on Python. What do you think?

Why is this tagged "Bitcoin" when it is nothing about Bitcoin?

Thanks for an amazing article. When Bismuth was in the testing phase, there were barely any responses to articles :D

Thanks @kingscrown for posting about this -- great info! I'm now following you, upvoted, and actually spent a little coin promoting it for you. Hope you will follow me @thoughtchain for original content and news about Blockchain, Bitcoin, Cryptocurrency and ICOs. Cheers!

The chart is not to bad I am just wondering where the moon is on that chart. I can never see it.

Very informative post. Thank you for sharing your knowledge.

be cautious in investing

Thanks for the information. I learned a lot!

Yes, that's good news, i hope that will make with ruby too.

Excellent write up! Thanks so much for giving Steemit a fair shake on such a popular website like Wired. We definitely need more publicity like this.

May God Bless you and good luck on your future endeavors..
Would follow, upvote and resteem your post.. thank you

It's one different coin from other icos coming out everyday. I think ill invest into it in the near future

would this be possible to do with an apple computer?

apple is linux and can run python easily so im sure its possible but im not skilled enough to help :)

thank you for your response, I will look more into it. thanks for your post!

Great, but only available on Windows.

No, it works under all systems.
It is very linux friendly and there are lot of good guides.

OK, I just looked at the main site and did not find any package for Ubuntu Linux. I did not searched for guides.

Bismuth does not support Windows 7 but Windows 10, Linux and Mac.

Thanks for this @kingscrown. I am new to crypto and still in heavy reconnaissance mode. Getting information like this is very valuable. Great info. Thanks

that was a exclenant post...thanks for information...,

Thanks for the info. Now following.

very useful, I do not know about decentralization and volatility, so interesting you describe so that I understand now, thank [email protected]

This post has received a 3.13 % upvote from @drotto thanks to: @banjo.

I think I should mine it while the difficulty is low.

Sounds interesting I'm going to look into it further

Great coin, at least from this article i get this idea. I know python language, and looks like very cool and inovation in crypto currency area. Thank you for the post.

I was just checking this one out yesterday, seems amazing! yeah good question , I want to know too

That is indeed a very interesting post. Thank you @darius1993

i think there are over 1100 coins out right now

Hello @kingscrown please vote me and follow me @bilqis07 please Nice writeup, but will the mining requires ASICs or can regular desktop CPUs perform? Does it require mining be done on the TOR browser? It seems like lots of other coins have what's mentioned here (PIVX for instance), so is the ONLY special thing the Python angle?

Will check it at cryptophia

people are making coins using python while i am just:

Promising coin indeed! I now using my 2 VPS servers (which also act as nodes for HEAT) to mine, so without any further investments I do get some BIS already.

For the ones not yet aware: One of the community members in HEAT, has created a gateway on the heatwallet as well in order to facilitate trading in BTC/BIS and HEAT/BIS. This can be seen on coinmarketcap as well, with about 5-10% of all BIS volume on the Heat exchange now.

Very interesting. It's very hard to keep up with all of the ICO's, and I've only invested in three cryptocurrencies at this point, but I am looking for others. Thanks for your post.

This having no premine is especially interesting, it speaks well to the intention of the developer(s) behind it.

As with any coin and the chain behind it, a certain amount of caution must be exercised. But from the looks of I wouldn't mind expanding my portfolio to include a bit of it.