Here’s a link to Roubini's Guardian piece tediously dissing bitcoin again, Bitcoin is Based on the blockchain pipe dream

I lay out the text with my comments in italics. Predictions that bitcoin and other cryptocurrencies will fail typically elicit a broader defence of the underlying blockchain technology. Yes, the argument goes, more than half of “initial coin offerings” to date have already failed, and most of the 1,500-plus cryptocurrencies also will fail, but blockchain will nonetheless revolutionise finance and human interactions generally.

This is wrong. Predictions that Bitcoin will fail elicit facts in defense of it pointing to the PoW algorithm and other moving parts of the protocol that make Bitcoin work. The blockchain is nothing without Bitcoin, not the other way around.

It is high time to end the hype. Bitcoin is a slow energy-inefficient dinosaur that will never be able to process transactions as quickly or inexpensively as an Excel spreadsheet. Ethereum’s plans for an insecure proof-of-stake authentication system will render it vulnerable to manipulation by influential insiders.

Wrong. Bitcoin, as a competitor for the USD, for example, is highly energy efficient (no need for the Pentagon, for example). The ability to process transactions/payments is part of the scaling process we’re midway through. In the meantime, Bitcoin is giving Gold a run for its money as a store of value. (So toss this point out as worthless).

And Ripple’s technology for cross-border interbank financial transfers will soon be left in the dust by Swift, a non-blockchain consortium used by all of the world’s major financial institutions. Similarly, centralised e-payment systems with almost no transaction costs – Faster Payments, AliPay, WeChat Pay, Venmo, PayPal, Square – are being used by billions of people around the world.

Wrong. Crypto will beat Swift because it cannot be censored. To miss this point, it to miss one of the major attributes of Bitcoin/crypto.

Today’s coin mania is not unlike the railway mania at the dawn of the industrial revolution in the mid-19th century. On its own, blockchain is hardly revolutionary. In conjunction with the secure, remote automation of financial and machine processes, however, it can have potentially far-reaching implications.

Missing the point. Did railways disappear? No. Were they an improvement on roads and canals? Yes. To focus on short term price action is – once again – to miss the point of the crypto revolution.

Ultimately, blockchain’s uses will be limited to specific, well-defined, and complex applications that require transparency and tamper-resistance more than they require speed – for example, communication with self-driving cars or drones. As for most of the coins, they are little different from railway stocks in the 1840s, which went bust when that bubble – like most bubbles – burst.

This is rank speculation – and not worthy of comment. Like predicting Elon Musk will send a Tesla to Mars. Who knows? Maybe…

In reality, blockchain is one of the most overhyped technologies ever. For starters, blockchains are less efficient than existing databases. When someone says they are running something on a blockchain, what they usually mean is that they are running one instance of a software application that is replicated across many other devices.

Wrong. Bitcoin does not compete with databases/spreadsheets. It competes with money. And it does a great job doing it.

The required storage space and computational power is substantially greater, and the latency higher, than in the case of a centralised application. Blockchains that incorporate “proof-of-stake” or “zero-knowledge” technologies require that all transactions be verified cryptographically, which slows them down. Blockchains that use “proof-of-work”, as many popular cryptocurrencies do, raise yet another problem: they require a huge amount of raw energy to secure them. This explains why bitcoin “mining” operations in Iceland are on track to consume more energy this year than all Icelandic households combined.

Wrong. Having money available to anyone, anywhere, anytime – and to be able to use that money for trade – without a highly problematic third party involved (banks, states,) will incentivize the market to overcome the problems mentioned here – that are at best – trivial.

Blockchains can make sense in cases where the speed/verifiability trade-off is actually worth it, but this is rarely how the technology is marketed. Blockchain investment propositions routinely make wild promises to overthrow entire industries, such as cloud computing, without acknowledging the technology’s obvious limitations.

Consider the many schemes that rest on the claim that blockchains are a distributed, universal world computer. That claim assumes that banks, which already use efficient systems to process millions of transactions per day, have reason to migrate to a markedly slower and less efficient single cryptocurrency.

This contradicts everything we know about the financial industry’s use of software. Financial institutions, particularly those engaged in algorithmic trading, need fast and efficient transaction processing. For their purposes, a single globally distributed blockchain such as Ethereum would never be useful.

Bitcoin does not try to ‘help’ banks it’s meant to replace banks.

Another false assumption is that blockchain represents something akin to a new universal protocol, like TCP-IP or HTML were for the internet. Such claims imply that this or that blockchain will serve as the basis for most of the world’s transactions and communications in the future. Again, this makes little sense when one considers how blockchains actually work. For one thing, blockchains rely on protocols like TCP-IP, so it isn’t clear how they would ever serve as a replacement.

Huh? Makes no sense…. Not worth even rebutting to this, author is just throwing a hairball.

Furthermore, unlike base-level protocols, blockchains are stateful, meaning they store every valid communication that has ever been sent to them. As a result, well-designed blockchains need to consider the limitations of their users’ hardware and guard against spamming. This explains why bitcoin Core, the bitcoin software client, processes only five to seven transactions per second, compared with Visa, which reliably processes 25,000 transactions per second.

Silly. Scaling coming soon enough. Absence of corrupt third parties is the key to understanding appeal and adoption of Bitcoin.

Just as we cannot record all of the world’s transactions in a single centralised database, nor shall we do so in a single distributed database. Indeed, the problem of blockchain scaling is still more or less unsolved, and is likely to remain so for a long time.

Although we can be fairly sure blockchain will not unseat TCP-IP, a particular blockchain component – such as Tezos or Ethereum’s smart-contract languages – could eventually set a standard for specific applications, just as Enterprise Linux and Windows did for PC operating systems. But betting on a particular “coin”, as many investors currently are, is not the same thing as betting on adoption of a larger protocol. Given what we know about how open-source software is used, there is little reason to think that the value to enterprises of specific blockchain applications will capitalise directly into only one or a few coins.

The premise of faulty. It’s a competitive market, let the market decide.

A third false claim concerns the trustless utopia that blockchain will supposedly create by eliminating the need for financial or other reliable intermediaries. This is absurd for a simple reason: every financial contract in existence today can either be modified or deliberately breached by the participating parties. Automating away these possibilities with rigid trustless terms is commercially non-viable, not least because it would require all financial agreements to be cash collateralised at 100%, which is insane from a cost-of-capital perspective.

ah HA! Yes. Here is the point of this propaganda. To defend the system as is with unsubstantiated scare mongering and circular arguments leading nowhere.

Moreover, it turns out that many likely appropriate applications of blockchain in finance – such as in securitisation or supply-chain monitoring – will require intermediaries after all, because there will inevitably be circumstances where unforeseen contingencies arise, demanding the exercise of discretion. The most important thing blockchain will do in such a situation is ensure that all parties to a transaction are in agreement with one another about its status and their obligations.

Unless the market evolves into something more sustainable… As it will.

Thanks for helping explain! That was a tough read. Kinda scary some points. I’m more concerned about regulation over user base growth. Thanks for the post!

Brilliant analysis as always:) I am so sick and tired of Bankster morons spouting on about 'blockchain' like its some kind of superior technology to Bitcoin.

Bitcoin is the antidote to white collar crime and bankster scammers. A Market open to the masses and not just connected insiders.

Talking of dinosaurs who are stuck in the past it would appear that Jim Rickards has finally performed a u-turn and come out to endorse Stellar Lumens. How long before he embraces Bitcoin?
See my article below for an analysis of this interesting about turn.

Arguably the network effect is the most valuable asset for any data, which on it own is not very valuable. The price of bitcoin is ultimately only as valuable as the transactions. Either Banks start competing as they offer the largest network or they die. Bitcoin will shine more and more as the technology evolves. All the innovation is on our side.

On the second to last paragraph, maybe i misunderstood it, but he basically says he is against blockchain because the current system allows cheating hahaha unbelievable...

@keiserreport - excellent anaylsis & commentary on the Central Bankster Roubini. The establishment-globalists are clearly fearful of Bitcoin & other cryptos and would not hesitate to put out false narratives and stories about Bitcoin. Of course Blockchain & Bitcoin really are one and the same (two sides of the same coin.. :) LOL! ) you cannot have one without the other. Clearly they have no idea what cryptos really are & the threat to fiat currencies that they represent. Upvoted! 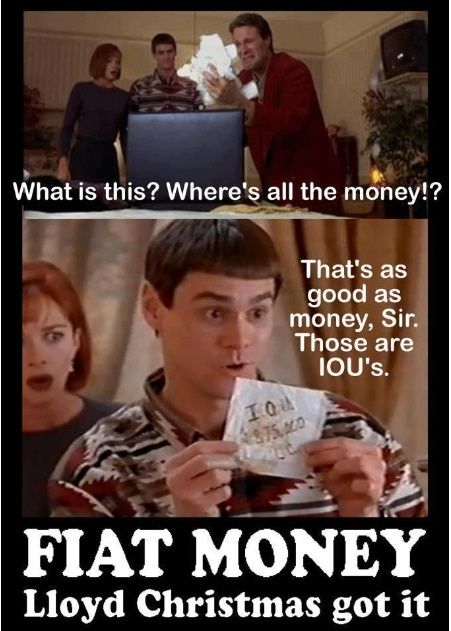 Excellent stuff Max, thats telling him.
M&S what a wonderful couple. Love Steeming Stacy and Mad Max. Another Max worth getting to know is Max Igan- Get to know Max Igan ( The Crowhouse http://thecrowhouse.com ). Everyone should get to know Max https://steemit.com/@maxigan and LISTEN to what he has to say. A recent show on the coming 5G network and what it means for mankind https://steemit.com/activism/@maxigan/max-igan-5g-what-s-the-deal

Wrong, Wrong, Wrong. Roubini is a bankster shill who's only skin in the game is to prop up the failing and inefficient tapeworm sector.

Banks may have "efficient systems to process millions of transactions per day", for themselves.

This is an excellent article; good to see you on Steemit! High signal to noise ratio in answering basically all of the silly complaints that financial people who basically just desire what is centralized and manipulable have about decentralized currencies . . . (In the meantime, Goldman's Circle is buying Poloniex . . . )

I think you will enjoy my article Bank of England Governor: “Bitcoin Has Failed" - Yet more bidding from Globalists Banksters...