I'm not going to get into Jamie Dimon declaring bitcoin a fraud any further here as we are going to do a special Keiser Report episode on this charlatan and fraudster next week once we land in Aspen and we will cover the hypocrisy and stench of his embarrassing proclamations in due course. We have some awesome exclusive never before heard info that will drive him mad once he hears it and it is very specifically related to his rant about JPM traders and bitcoin. LOL.

In the meantime, here is a Max Keiser dramatization of the Origins of Jamie Dimon:


For those who weren't around in the markets back in 2008-2011, Jamie's bank, JPMorgan, not only engaged in widescale fraud (and here is an article from only this past week with new revelations about the scale of that fraud) but the bank had also been gifted Bear Stearns by a Fed/Treasury engineered weekend takeover in March of 2008. With that takeover, JPM inherited a massive short position on silver.

And from that day on which Max Keiser noticed the bank's vulnerability to a short squeeze was the Silver Liberation Army born: 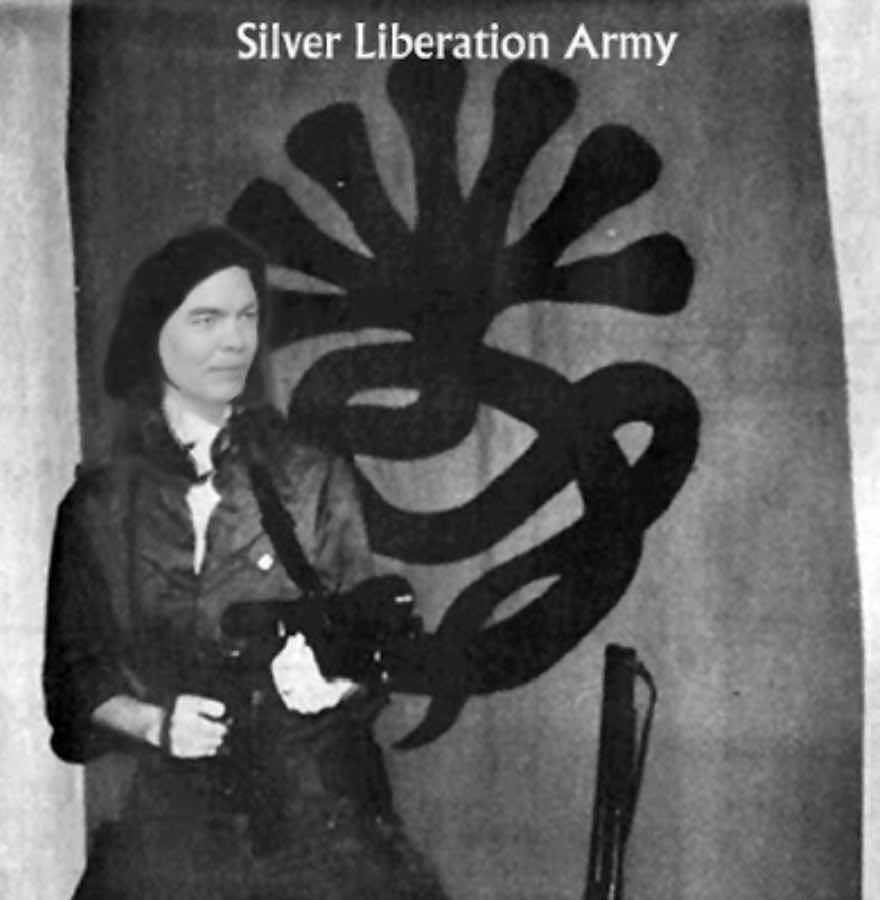 To fight banker corruption where the government refused to stop the fraud: Then came bitcoin. And now Jamie rants. Tellingly, it has happened once his bank and others have dropped out of their consortium to try to manufacture their own blockchain they hoped to foist upon the world. I think that engaging in the actual process of blockchain building may have taught him the true nature of the bitcoin threat to the banking cartel's extraordinary privilege of creating money.

I could say the same regarding BCH vs Blockstream or BTC vs Alt-coins
The future belongs to coins like Dash which has amazing fundamentals without any of the problems of Fiat or BTC. I also think BCH will overtake BTC. BCH is the original Bitcoin scaled 8 times. SegWit coin is a coin that make me want to go back to VISA.

Change and evolution is always met with ridicule and later resistance.

This comment has received a 4.37 % upvote from @bellyrub thanks to: @sadekj.

Here is my take: https://steemit.com/bitcoin/@greenman/is-bitcoin-a-currency-and-is-jamie-dimon-correct-that-it-is-a-fraud-no-to-both-not-throwing-rocks-but-showing-a-few

Amusingly, a boy I was friends with aged 7 and who taught me how to play monopoly, went on to become VP of Goldman Sachs in one of their large regional sections.. He would always be banker when we played monopoly and he always won - with me wondering how he was stealing money.. I never caught him stealing. In real life though, the methods of their theft are not so hard to find! I'm sure JP Morgan can't be too different in their M.O.

The demon could have quietly bought bitcoins then try to scare others and scare the prices down. Demons do that. These demonic beings have monthly income of millions. Still not enough.

Whoa. Good call on that one! I keep forgetting the amount of FUD that can so easily be laid out by those looking to profit in an unregulated market.

Someone or some Anonymous group should hack Demon's account. That will be the best justice.

Upvoted and Followed. Here's the REAL reason he specifically called Bitcoin a "Fraud" (NOT just wanting to drop the price) a 30-second read: 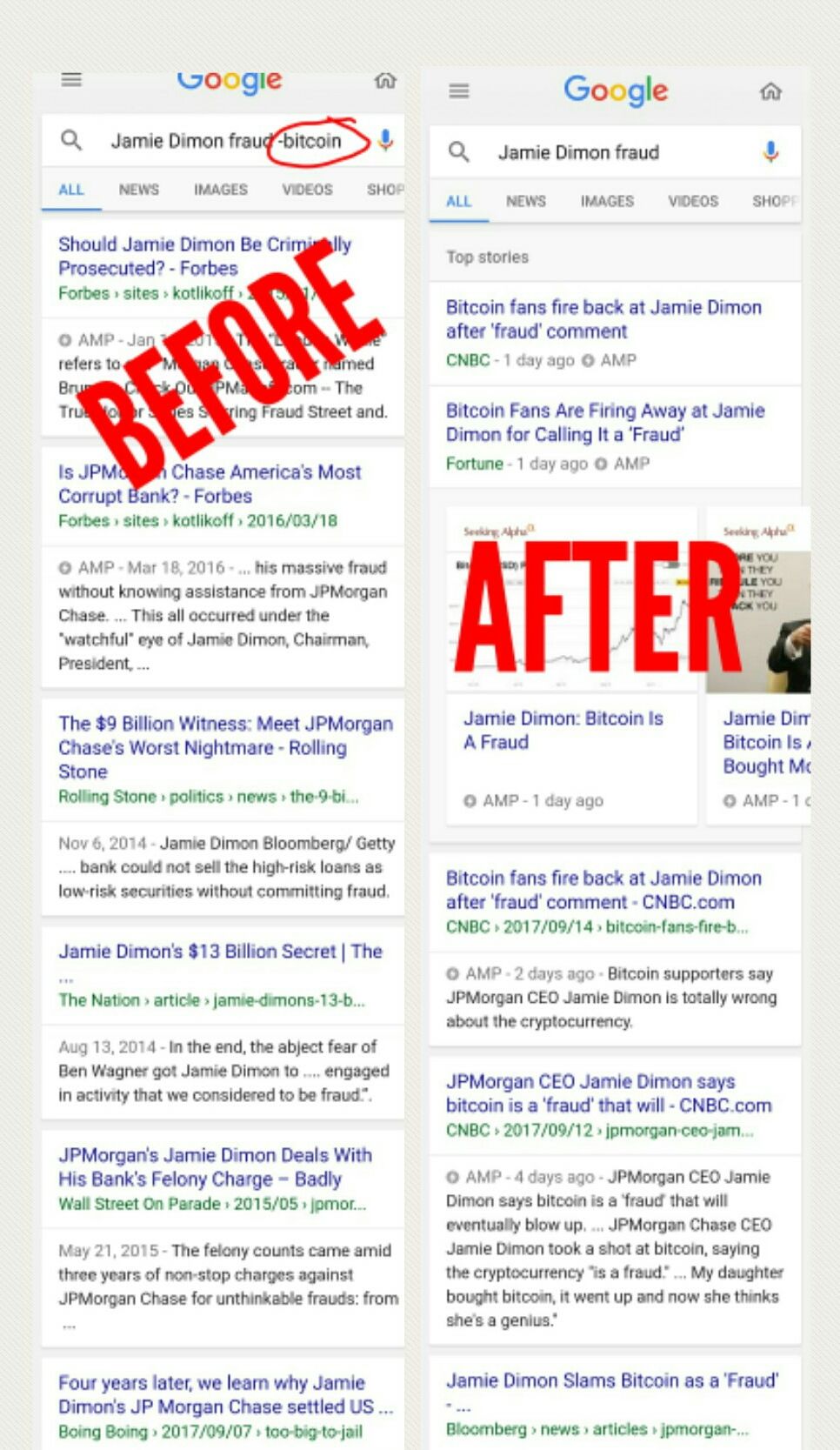 Love it Max!!! Keep going man. I wish more people have your dedication. Full support on all your content.

Funny how nobody involved in the massive fraud and corruption that led to the financial crisis in 2008 went to jail at least that I'm aware of (the SEC; the Ratings agencies like Moodys, S&P, etc; and all the investment banks were all in on the sub prime mortgage ratings racket). In fact, some Goldman Sucks...I mean Goldman Sachs execs were even given cabinet positions in the Obama administration shortly after. Hooray for hope and change.

Regarding short positions on precious metals, I once heard this interview (link below) with with a former employee of a London gold exchange Andrew Maguire discussing how the banks and exchanges manipulate PM prices, have massive short (paper contract) positions and, at the time of the article, were leveraged in the gold and silver market at about 90:1. He's predicted a massive squeeze at some point. Seems like they've kept the lid on it up to this point but it would be interesting were his theory to come to fruition. I don't know how much truth there is to this but it's an interesting read.

Looking forward to hearing your report next week.

Agreed with your whole explanation except first word - funny. Instead could replace it with bunch of these - grotesque, evil, repugnant, shameful, incestuous,.....

Thnk you very much. Please confirm, is Jamie Dimon a parasite and piece of shit who should be in jail?

Yes and yes. He and his ilk should be rotting in a federal penitentiary. But the big banks own most of the US politicians so I see little hope of justice ever being served to this disgusting individual.

Oh yes, I remember a few times in my life when I stepped on biological matter related to him... I hate dog shit.

Well thank you cryptokeepr, you have enlightened my point of view and judgement.

Solitary confinement with break this demon.

Yes, he is a parasite who thrives on theft and then displays it as crafty "work".

We'll try. Stay tuned for our cross country journey. Will be steeming along the way.

Please give a link to your tour dates & places! Long time KR watcher! 📺

What irritates me about this is that the 'China ICO & now exchange banning' is the real cause for Crypto downwards movement, and this walking excrement thinks he caused it all himself.

We need to Streisand-Effect the SHIT OUT of Jamie-boy's many criminal acts over the years.

He doesn't know wtf he's talking about when it comes to new technology. He's old hat.

NEXUS - Nxs the future... goal to decentralize Everything
Aloha !

Great post. I hate fraudsters in any type of biz. They always end up ruining it for honest people. Expose them and let them suffer. Upvoted and following you. Thanks again, and be blessed

Agree. I read that and my BS meter went fully into the red.

Even his name has diabolical clues. Hint spelling. So much evil and greed, take and take and bonuses and luxury cars luxury apartments, private jets, luxury watches that tell the same time. Demons.

Is this is the real max? Goddamn followed you since 2010-11. Wishing I took your advice on BTC back then. They do say I am a slow learner lol

Yes the real Max Kaiser, and can watch his YouTube channel. Cable TV banned it but it's alive in YouTube. And if YouTube bans it, then it will be alive in Dtube because with blockchain it won't be suppressed anymore.

Of course he's going to make a comment like that he's a banker. Bitcoin and any other alt coins are a threat to the central bank system. He's know if he goes on the media and says stuff like that because of his influence and poistion people are going to believe him.

Power needs to be decentralized.

Because it is a code currency proud of the ability difference that is more overwhelming than an existing currency to, I think that I shift in the future.

I only think the code currency not to readily shift smoothly unlike IT. Anti-reform forces are big.

Jamie Dimon can suck it.

The words of the CEO of J. P. Morgan to knock down the Bitcoin

Haha good work ! Nice to find you on here.

@keiserreport Thanks for your work as well!

@keiserreport thnx for putting this information all with each other..

Definitely a dinosaur. Often these old well paid rich guys don't know nothing about the real world because they think they already know everything

Can't wait for this one!

@keiserreport Thanks for sharing. Love it.

@keiserreport Steemit is gonna adjust a great deal of lifes, it's transformed mine and several Other folks but that is certainly just the start.. Drive the price down buy up as much as you can then control the market. Just get a deal on BTC thanks to these clowns.