The plot thickens around Jamie Dimon's remarks towards Bitcoin from several weeks ago as new information comes to light...

A few weeks back Jamie Dimon used some very harsh words for Bitcoin and cryptocurrency in general.

He called it a "fraud" and a scam saying that investment wise "someone was going to get killed".

He even went on to say that if any of his traders at JPM were caught trading Bitcoin they would be fired for being dumb.

These were extremely harsh words and very surprising coming from someone in such an influential position.

Even if he may think those thoughts privately, it is another animal all together to come out and say them publicly like that.

Usually people in his position choose their words very carefully as they know every single word will be scrutinized and analyzed and are likely to make tomorrow's headlines.

First, there was the twitter find where someone pointed out that JPM Securities makes a market for a security in Sweden that tracks the price of Bitcoin.

It just so happened that several buy orders were being routed through JPM Securities right around the time that Dimon was publicly bashing Bitcoin etc, and dropping the price to multi week lows.

So, JPM was buying at the same time it's CEO was bashing?

It looked like market manipulation in every sense of the word.

However, JPM was quick to respond saying that JPM Securities was just making a market in that security and they were not actually buying any of it for their company or employees.

Instead it was clients routing orders through said market maker.

That thought was also quickly squashed by JPM when they further stated it was actually other market makers routing orders through theirs to fill orders for their clients.

That wasn't a good enough explanation for everyone.

Shortly after, a company in Sweden called Blockswater filed a market manipulation and market abuse lawsuit against Jamie Dimon for making knowingly false and misleading statements against Bitcoin with the intent to push down prices and hurt its reputation.

Since that time Jamie Dimon has pretty much stuck to his guns regarding Bitcoin.

"It's just not a real thing, it will eventually be closed."

However, the plot thickens even more...

"While Jamie Dimon was making those comments, I was an invited speaker at JP Morgan's offices in San Francisco to give a talk with other fund managers and clients of JP Morgan who are really curious about cryptocurrencies and the underlying blockchain technology."

So, while Dimon is calling Bitcioin a fraud and something that will be closed, some of his coworkers are attending conferences and meetings trying to learn more about it and the underlying technology?

Something about that doesn't quite seem congruent.

Looking at all of the above there are a couple conclusions I have come to.

Either Jamie is afraid of Bitcoin and trying to shut it down before it takes off and ultimately hurts his business.

Jamie is trying to push prices down in order to get better entry points while at the same time trying to understand and harness the technology for use by his financial firm.

To further expand on that, Dimon either believes what he is saying and thinks Bitcoin is a fraud, which means he is publicly bashing something his company is making a market in for his clients, or he really is trying to get in at better prices.

Either way, Jamie would probably have done better for himself by taking the high road on all of this stuff and sticking to politically correct statements like most banksters in his position tend to do. 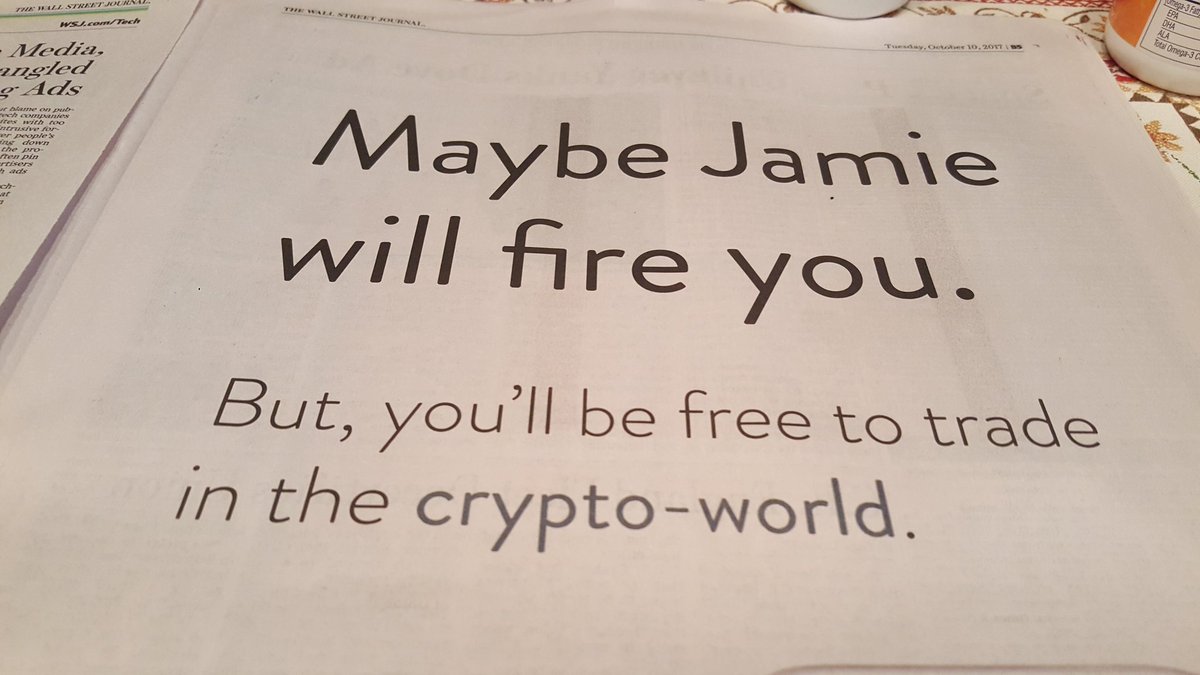 Someone, paid to have this full page ad put into the Wall Street Journal lol

Even an extraordinary fool.

I wish I was this person haha

paid to have this full page me Walldero

I believe this is from Eidoo (wallet and exchange).
They are having a token sale soon.
Good publicity.

Since its not public trading like stocks its your classic case of stock manipulation/ insider trading trash talk a stock on false rumors and buy on the dump and profit. Guys a jerk and all the more reason we should all buy bitcoin etc and stop investing in shady shit banks that only keep 10% of the money on hand anyways!

Nice points you raised here..I think Jamie simply wanna force down prices with such statements so they buy big...cooperate hidden agenda... @jrcornel thanks for sharing this very informative post...keep it up

Asking Dimon (JP Morgan) about bitcoin is like asking a VCR for it's opinion about DVD's. Just sayin'!

Ah Jamie Dimon, your moral compass was broken years ago yet you still manage to find your way in front of a main stream camera somewhere to speak your usual non-truths... which is surprising as most of the Wall Street guys thought you'd lost your tongue up Bernie Madoff's backside years ago.

In my opinion he has a lot of Bitcoin, I mean a lot :). On the other hand he wants that people take loans in Dollars in his bank.

this full page advertisement put into the Wall Street

Its amazing ther power of some people's words. Market manipulation is a real thing and it happens all the time. The problem is how do we prove it???

The same thing is happening with Shopify right now which recently got harshly criticized by a shortseller and tumbled 20%.

Its terrible these people get away with these things and make tons of money from it.

It is truly incredible to witness the market power of a properly positioned individual. I hope this will not become a trend.

Who cares Jamie dimon !!!! Every one wants to make money on Bitcoin.

Thanks for the info, yeah I knew he was buyin while cryin about the bitcoin! LOL Underhanded Scammer that one! :-)

I think people should start paying more attention to wording. It seems "cryptocurrency" or "blockchain" is being conflated with "bitcoin", but they are not the same. That Twitter quote said he was hosting a blockchain event, and if you make the careful distinction, that gives his 'Bitcoin' comments a very different meaning. Ripple is also blockchain.

I just read a post on Bitcoin.com talking about Goldman Sachs planning to get into Bitcoin in Q3, 2018, but the actual quote said "Crypto currency". Very different meanings.

Thanks @jrcornel this does sound strange ...i think they're looking to put the prices down and snap it up when they realise there is no stopping Bitcoin, I agree his comments would have fared better if he'd have stayed politically correct!

My love for you will never end -"BTC"

Very interesting... you certainly might be right that his bashing was to drive down the price and let his traders have a better entry point! Wouldn't that be a scandal! Ha!

Only speculations can make it happen

These guys get into these positions and just run their mouths. He probably got a huge thrill and ego boost knowing he caused a $2000 drop in bitcoin when he said what he said. I wish he’d come out and do some more trash talk on bitcoin. Cause I’d like a lower entry point myself. 😁

He probably got a huge thrill and ego boost knowing he caused a $2000 drop in bitcoin when he said what he said.

It sounds like he believes he has so much power over people that they will follow what he says and stay away from bitcoin. In reality I don't think as many people do what he says as he thinks there are. I think he is just trying to keep people from bitcoin so the prices don't go up and he can get a bigger piece of the bitcoins. People are smarter than he thinks. Just my opinion.

Jamie is an old timer. We can't expect him to understand Crypto.

@jrcornel Great piece. Thank you. Have a killer day.

If people have forgotten about what jamie dimon represents go watch some of the first Keiser Reports.1-50. He's a liar and a cheat. Boycott JP Morgan. Workers there should Strike. The police should go to his house and arrest him for stealing. He's been manipulating markets but calls himself a market maker. My whole family have been turned into renters because of people like him. Just do a little homework on the guy. The banksters want to take control of cryptocurrency. They are using stall tactics and propaganda so that the people won't traverse the learning curve of the blockchain. Please do not take this man seriously. Learn the truth about him, Lloyd Blankfein and the other CEOs of the big banks and be aware of the destruction they have already caused.

I don't think Jamie Dimon is capable of "taking the high road".

I think a more plausible explanation is that he believed what he was saying AND was trying to manipulate prices.

The guy is a complete douche bag.

I wonder what @maxkeiser thinks of Jamie Dimon?

He is running the bankster playbook:

A. Demonize the hell out of something publicly (even while usually doing the exact opposite in private)
B. Get the government cronies to regulate it (which usually means put it under the banksters control)
C. Buy it all up

We witnessed all three take place in a couple weeks.

Dimon is doing what banksters do....saying one thing in public while doing the exact opposite in private.

I knew about these but it's good to see all of them in one post even more so because it's on Steemit.

Jamie is that crywolf. He's gonna have a bad time.heheh

I think that, as you say, people like Jamie Dimon know always and exactly what to say in public. IF his point was to dump bitcoin because he is afraid of cryptocurrencies, that was a fail, and he knew that. Hence, it is an obvious strategy of market manipulation. My two cents.

he must feel very stupid cause most of his staff will start trading in bitcoin after today,Bitcoin has finally broken the resistance and its trading higher at 5100, and looks to be heading higher, no stopping it now , this is news for those who said it cant rise but will fall,

information is very useful, thank you very much

Thanks for the post this has been really useful to me! Very informative I love your channel thanks Kirsty 💗👌

Hallo sister me you friends

The history of JPM shows us this is their go to tactic to drop prices first and then invest heavily. Then they turn around and do something that makes their stock soar and they sell. It's a great marketing strategy, if you are not a good person. Always follow the money, not the words.

Nice digging. Thanks for posting on SteemIt.chat. Upvoted, resteemed, and followed!