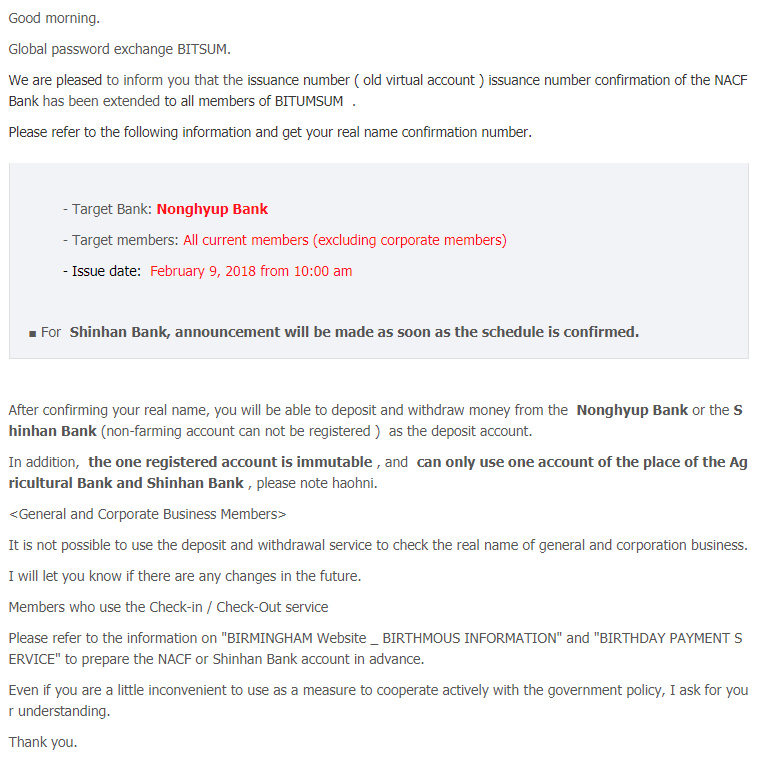 Appears to me that another bank is coming live now with identity verification, with promise of what I believe to be the "main" Korean bank (second largest) for crypto moving forward still in the works (no specific update given) Hello @jesseluther, Nice to meet you!

Nice info. Hope india will also, do something about the crypto we just can't withdraw above $2000

Financial Supervisory service (FSS) of South Korea receive data from the banks that provide services to register a virtual account for the exchange of cryptocurrencies. The data were provided by six banks tested by regulators last week: Woori Bank, KB Kookmin Bank, Shinhan Bank, Nonghyup Bank, Korea Development Bank and Industrial Bank of Korea. On Thursday, the news channel reported that the total Bank income for the provision of such services over the past year amounted to 2,2121 billion won (~ 2.1 million US dollars). This is 36 times more than 61 million won in 2016, reports Yonhap. Banks earn money on cryptocurrency exchanges, by charging approximately 200-300 out of every client's Deposit, says news channel, adding that the traders pay higher fees to exchanges in withdrawals. With the help of this service the Industrial Bank of Korea gained more than others. The Bank provides services to Upbit, which has recently become the largest stock exchange in the world. Kakao Corp, the operator of the most popular chat app in South Korea-Kakao Talk, also supports Upbit. The Bank " earned a total of 675 million won, setting a fee for the owner of the virtual account in the amount of 300 won for one contribution," - said in the publication. In second place is Nonghyup Bank, which cooperates with Bithumb and Coinone. Last year, the Bank earned 654 million won. Currently, the South Korean government has banned banks from registering virtual accounts until a new identification system based on real names is installed. Banks will also be obliged to find out the purpose of trading and check the source of income of each holder of a cryptocurrency account.

Maybe they become an online stage for purchasing, offering, exchanging, and putting away computerized money. And that their main goal is to make an open budgetary framework for the world and helping individuals change over computerized money into and out of their neighborhood cash.

Thank you Mr @jesseluther for your financial presentation, it is very interesting. I will follow you on your future articles.

Congratulations @jesseluther! You have completed some achievement on Steemit and have been rewarded with new badge(s) :

Does anyone know of a credit card we can use to buy cryptocurrency?