When word of mouth becomes law - Most popular exchange in Nepal suspends all bitcoin transactions. 6 hours ago, the most popular Bitcoin exchange company of Nepal - Bitsewa announced in a Facebook post that they are suspending all bitcoin-transactions and customers will not be able to buy or sell bitcoins hereafter. 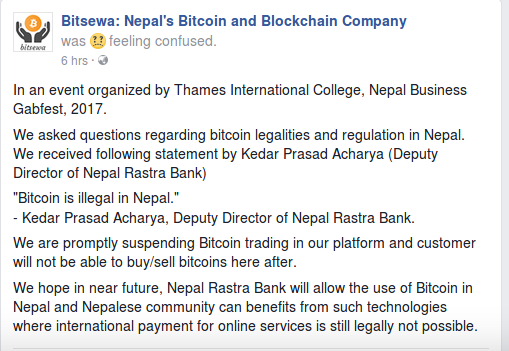 Yes, you read that right. Just because this person says that bitcoins are illegal in a college event, it becomes illegal. Please keep in mind that this person is a representative of a National Bank and not the representative of the Government. There are no bills passed or proposed regarding any take on Bitcoin or any other cryptocurrency by the Government whatsoever. Suddenly this dude when asked about the legality of bitcoin in a college event, says that it's illegal and the major exchange decides to suspend all the bitcoin transactions indefinitely until any further changes occur.

Questions to be asked:

Apparently they're not. The exchange claims that other cryptocurrencies are still legal in the country because only bitcoin was quoted to be illegal. This sounds insanely absurd and it actually is. The exchange is assuring people that other "trading" other coins should be perfectly fine unless and it's just bitcoins that they'll suspend the trading of and that it'll be adding Ripple to the list of currencies in a few days. 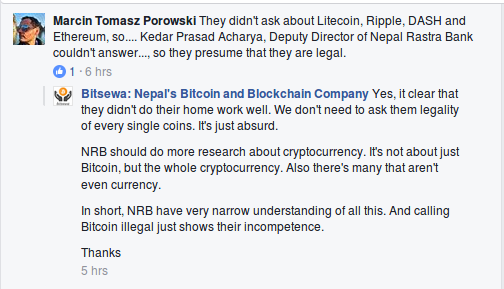 The entire country has been under a political chaos over a decade. It took the politicians of the country nearly a decade to unanimously agree upon the constitution with recurring elections every few months. It was and is still chaotic. The Earthquake hit country really hard around this time last year and it was devastating. However, the people are upset with the government for not distributing the aid-funds properly and for using the funds for personal usage. Perhaps they could use blockchain to track and do exactly that, instead of calling something illegal without any prior notice or without even properly studying it for a concrete period of time.

It looks like price of bitcoin in Nepal will go up.

Might as well drive the price higher whenever it becomes legal.

So that is why BTC is falling..
Tnx for info!

I'm quite certain that, that's definitely not the reason why BTC is falling. Nepal has very less influence on the crypto-world. :)

Hmmm i didn't know that.That's why i read posts on Steemit. :)

Nepal Rastra Bank serves as Nepal's Central Bank . One of its duties is to regulate the foreign exchange policy. Not only that but it is one of the principal owners of the Nepal Stock Exchange. With that said, I am not surprised that the deputy director has the power over what is legal and what is not in a country like Nepal.

Well, think of it this way: Bitcoin was legal in Nepal just before he said that sentence and the minute he said "Bitcoin is illegal", it becomes illegal and it wasn't a press addressed to the nation as such. It was a college event.
So, even if he has any say or power, I'm sure there are procedures to document the legality status.

In a more "developed" country it would be the case. Following procedures becomes a must. But I am almost sure that the initiative was taken by some group of people to make his statement a reality in order to realign themselves behind him to gain power/benefits/status and climb the hierarchical ladder as a result. I have seen these occurrences happen plenty of times in less developed countries in various contexts. But again in this specific case I could be wrong, of course. Thanks for your addition by the way :)

I don't really know what's the case here as the way the Facebook post was made, it seemed like a casual conversation wherein he called out bitcoin to be illegal. And it also seems like there was a probability that he would have never made that statement had they not asked about it. So, I doubt any sort of "leg-pulling" was involved in this case.

ignorance derails progress.. I don't know how people can be so ignorant.

"A representative of a National Bank" , enough said lol . Thanks for the article tho

the shitty laws and rulers.

Very informative....
As usual lack of knowledge I must say for our politicians.

That sucks :(.. Anyways thank you for sharing this. Great content brother. Keep up the great work..

This post has received a 0.78 % upvote from @booster thanks to: @isteemit.