Check out Digibyte (DGB)! It is clearly within the JAWS of WEALTH broadening pattern as shwon by the blue lines. DBF placed very nice purple impulse waves i,ii,iii,iv with wave v extended. This means that a very deep retracement was likely. And sure enought the subsequent a,b,c was a near 90% correction. Price is now sitting on the lower blue line support. Now, look at the dotted purple lines that outline the symmetrical triangle. The price is at or about on the Apex which is the point where the triangle lines intersect. Something BIG is coming and it's gonna propel SC to $0.04707 or higher. Price should touch the upper blue line. Then a MASSIVE correction could be next but let's not focus on that for now as there is much profit to be made in the upcoming bull run to the sky! This pattern shows another similarity pattern index due to uniform sentiment across cryptosphere. Now check out the DGB/BTC chart below. Sentiment is creating an ALL the SAME MARKET!! This is a phenomenon you do not want to miss out on! NOW is the time to ladder in and quickly. 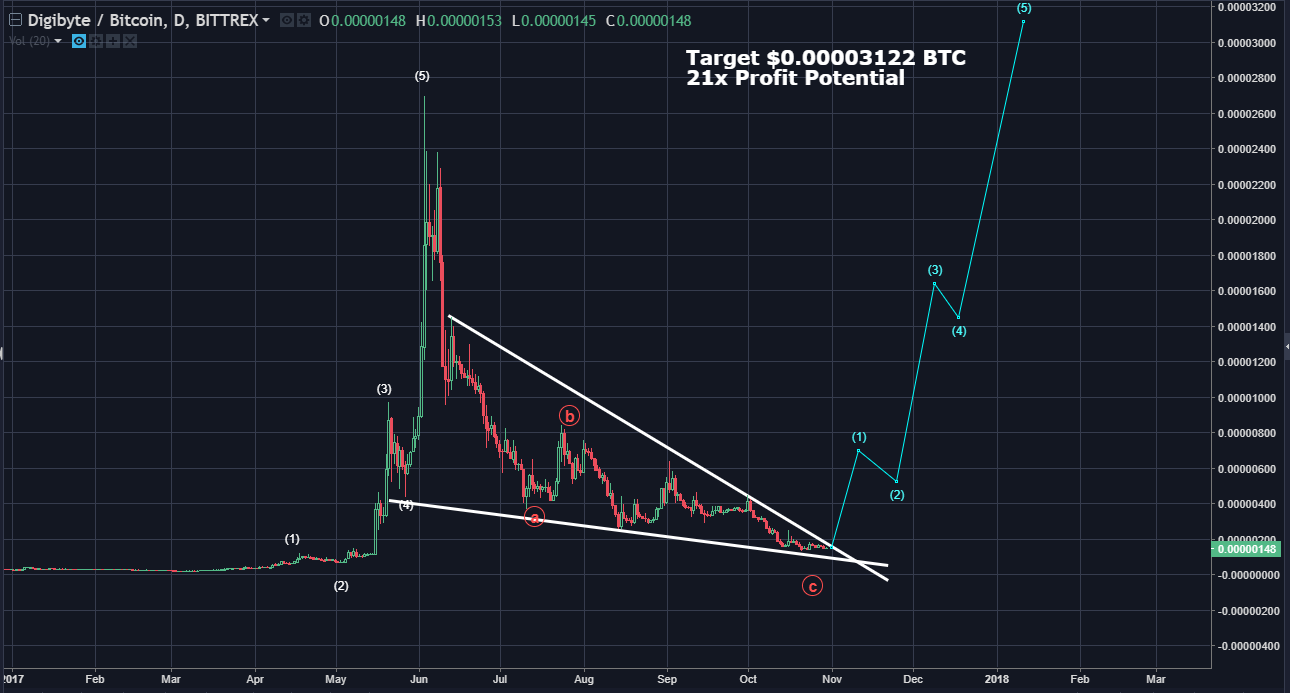 The DBG/BTC is also creating a downward pointing bullish symmetrical triangle! It placed white impulse waves with wave v being extended and so the retracement was extremely deep. The subsequent a,b,c is almost if not already done. I've outlined the probable price impulse pathway towards a 21x profit potential!

If this blog post has entertained or helped you to profit, please follow, upvote, resteem and/or consider buying me a beer:
BTC Wallet - 15ugC4U4k3qsxEXT5YF7ukz3pjtnw2im8B
ETH Wallet - 0x1Ab87962dD59BBfFe33819772C950F0B38554030
LTC Wallet - LefeWrQXumis3MzrsvxHWzpNBAAFDQbB66

Legal Mumbo Jumbo: This is only my opinion, make of it what you wish. What does this mean? It means it's not advice nor recommendation to either buy or sell anything! It's only meant for use as informative or entertainment purposes.**
#kr #cryptocurrency #blockchain #digibyte
3 years ago in #bitcoin by haejin (86)
$Na
100 votes
Reply 13

Hopefully your predictions are true.

Thanks for the update ! Jared Tate ( Founder ) at Texas Conference

Thanks for the analysis of the trend! Hopefully we all go to the moon soon! 😝

Shouldnt wave B have only 3 subwaves but not 5, in ABC correction b is always 3 subs ?

Haejin,
Thanks for the analysis. You mention SC and DBF in the article? I am assuming that is DGB right? Do you believe technical analysis overrides fundamental analysis in your experience? In other words, are emotions stronger than what may be produced by the digital asset?

Haejin,
So even if a digital asset is fundamentally sound, technicals can override that due to the emotions of fear and greed? Does the nature of Elliott Wave override that? I am trying to understand this chart specifically as you say the profit potential is so high.

Haejin,
Always appreciate all your analysis! You are definitely a huge asset to everyone in this space. Has your view of Digibyte changed with the recent run up in BTC? Love to see a more active analysis with the BTC factor.

DGB is faster and easier to use, and can cater much more bigger volume of transactions blocks compare with BTC folks, DGB has Segwit also.

Pls take note now China occupies 81% of the mining capacity of Bitcoin worldwide, if China government announce "force-closure of all the mining factories in China", BTC/BCH/B2X all will be in big trouble of transferring blocks. Even if throw all the transactions of Bitcoin to Digibyte, Digibyte will still run smoothly, see full explanation as below youtube. If that would happen, you will see big jump in all the altcoins as substitute including Digibyte.