Crypto Market Cap Forming Head And Shoulders Pattern. Are the markets going do go down further? After I've posted my bullish TA on Bitcoin (https://steemit.com/bitcoin/@drumsta/ta-bitcoin-correction-is-over-price-projection-49225usd-by-may), I saw in the comment section that there were a lot of people disagreeing with me, saying that they expect Bitcoin to fall anywhere between 7500-8000$ (actually, I was among the first ones to say this in a facebook group of traders, after Bitcoin skyrocketed to 16540$. But that didn't happen, actually, the price pulled back and then went to an all-time high just bellow 20K$, and I was in disbelief). As I always like to stees test my analysis and ideas, I've looked into the reasons why they would think that and what other analysts are projecting.

The guy I respect the most regarding TA is definitely Tone Vays. I think that he is the main propagator of this target price. For more info check out his newest video:

Bitcoin Morning Brief - BTCUSD Could NOT Break Out, Is $7,500 Still In Play?

Not being sure what to think anymore, I've started to look in the other direction and that is the market cap of cryptos in general. There is a lot of FUD (fear, uncertainty, and doubt) in the markets, and there are not many aggressive buyers willing to buy Bitcoin at these prices. It's funny how a month ago there were people buying Bitcoin at 14K$ easily thinking that it's a good price, which spiked the price up to almost 20K$, and now buyers are uncertain if the price is right. For that reason (mainly psychological, and emotional perception of the price), I think that there just may be another dip coming,

After looking at so many BTC/USD charts, ideas and projections on the tradingview, youtube and here on Steemit, I was very confused and can't seem to analyze things on my own and not have those running in my head creating bias charts resembling others that I've seen.

So another approach came to my mind - Bitcoin's price depends on the market cap, being the main fiat- crypto gateway, and it's not looking good. After staring at charts for a long time now every single day, I think that I've developed a trading visual intuition when evaluating chart patterns, and this pattern knows as Head and Shoulders, is most logical and intuitive to me.

For all of those who don't know what that means check this link:
https://www.investopedia.com/terms/h/head-shoulders.asp

The Head and Shoulders Story
Like all charting patterns, the ups and downs of the head and shoulders pattern tell a very specific story about the battle being waged between bulls and bears.

The initial peak and subsequent decline represent the waning momentum of the prior bullish trend. Wanting to sustain the upward movement as long as possible, bulls rally to push the price back up past the initial peak to reach a new high (the head). At this point, it is still possible that bulls could reinstate their market dominance and continue the upward trend.

However, once price declines a second time and reaches a point below the initial peak, it is clear that bears are gaining ground. Bulls try one more time to push price upward, but succeed only in hitting the lesser high reached in the initial peak. This failure to surpass the highest high signals the bulls' defeat and bears take over, driving the price downward and completing the reversal.

Calculating the target for H&S pattern is done by measuring the price difference between the head and low point of either shoulder. This difference is then subtracted from the neckline breakout level (at a market top) to provide a price target to the downside.

More on how to trade H&S pattern here: https://www.investopedia.com/articles/technical/121201.asp

What might cause this decline? The answer is psychology. The market cap went from 833B at the peak to 469B at most recent low. That's a 44% retracement, and the older market participants have seen their portfolios nearly cut in half in USD evaluation, while the new ones suffered a great loss (they didn't actually, all of their coins are still there, but this shift in mindset that's not going to happen anytime soon is another topic). They waited patiently for a rebound, but there's been an almost a month with nothing happening, so they started to go inpatient. They are now thinking "where is the other 350B of capital, and why aren't people coming back to the market to push up the prices back to where they were?" They now see the possibility of Bitcoins price going lower and they are scared. The logic at play here in my mind goes something like this: "I already lost a lot of money, but if I pull out now and the prices go further I am going to be the greatest fool, buying high and selling low. Maybe I'll pull out a half of my money just in case. I don't mind losing some bitcoin (if it goes higher in price), but I do mind losing money."

And that's why I think that if another selloff is going to happen, be ready for another 40+% retracement, which will bring Bitcoins price from the current 11300$ to 7500$.

I will be closely monitoring the market cap in the following days, If the neckline is breached I will proceed to close my positions and evaluate my exposure.

Let me know what you think, I am eager to hear your opinion.

What people fail to realise is this, the only reason Bitcoin went to $17-19k was because of the banks and wall street, the whales, seeing a opportunity to make millions and they did just that.

Whenever they feel like stepping back in is when this will return to a bull run. If there mission was to kill bitcoin then this is falling down to the proper value.

The whales, banks, wallstreet are greedy bastards, all they care about is cash. They can and probably will come back in and pump this to 40k or more but KNOW, 1000% they are pulling there money again.

You think the last crash was hard, the next one will put some people in so much debt there future generation will be paying it off.

You may say, i will get out in time...lol Greed is a killer, it creeps up on you and whispers in your ear... its going to the moon... its going to 1million. I am writing these words and will probably be caught out myself.

The banks want to kill Bitcoin, its a threat to there existance.

I saw Tones vid... I got also indicator. I dont got so much experience like Tone. But we made 2 times higher lows. So its still not clear if panic selling is coming but we need to reverse the next 12h thats for sure... 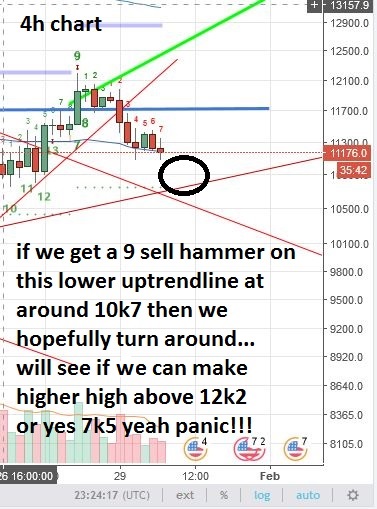 a lot of uncertainty, we will see :)

How viable would it be to use Google search data to discover trends, correlations and future price movements? I have been playing with this idea for a while now.

And have you found out anything useful?

check out this article https://www.ccn.com/the-google-effect-and-bitcoin-parallels-persist/

I upvoted you, would you upvote me also

alittle piece of advice, write something worth reading and you will get up votes. Especially when you are the first to reply.