Can Bitcoin BE a Currency? Really??

Bitcoin is amazing. The idea of cryptocurrency and the blockchain technology that it introduced to the world is honestly one of the biggest discoveries/inventions of our time. There is no doubt about that. I would submit that as a fact. However, I keep having the question run through my mind about whether it can be a true currency.

First, maybe I should define what currency is in my mind.
Here we go...off the top of my head:

Currency is a liquid measure of value that has stability to be used for trading goods and services.

Can Bitcoin get past just speculation or nest egg?

I have watched Bitcoin rise up to over $6k the past 2 months and it is incredible! Looking at the value and seeing it go up 45% in one month is crazy! However, that doesn't help it become a currency does it? Am I motivated by just speculating on it's value and wanting to see a stronger return? In this mindset I am not wanting to be able to use Bitcoin or replace the dollar with it. I want to see how far Bitcoin will take my dollar. It still all goes back to what amount of value in dollars I can get from Bitcoin.

It seems every mainstream article and tracker is showing the value against the dollar.

Everywhere it is a comparison to the value of a dollar.

Is this just a necessary step towards becoming a truly fluid used currency?

Can this hinder it as a true currency?

Bitcoin transactions currently take hours or days to complete. I understand that this is different from it being confirmed but you will not be able to use the funds until it is complete (at least this is my understanding). Again, this is not as complicated an issue if you are looking at it as a nest egg or investment opportunity but it seems to greatly hinder the ability for it to be used as a main stream currency on goods and services. It is interesting to see people I follow in different circles showing interest in cryptocurrency. An example recently for me is MPJ in the screenshot below. He does incredible teaching videos on software engineering and development. He has over 4 million view on Youtube and previously worked as a dev at Spotify. Recently he asked about adoption of cryptocurrency and it made me start to think about how even the development world needs to be shown adoption before actually adopting. 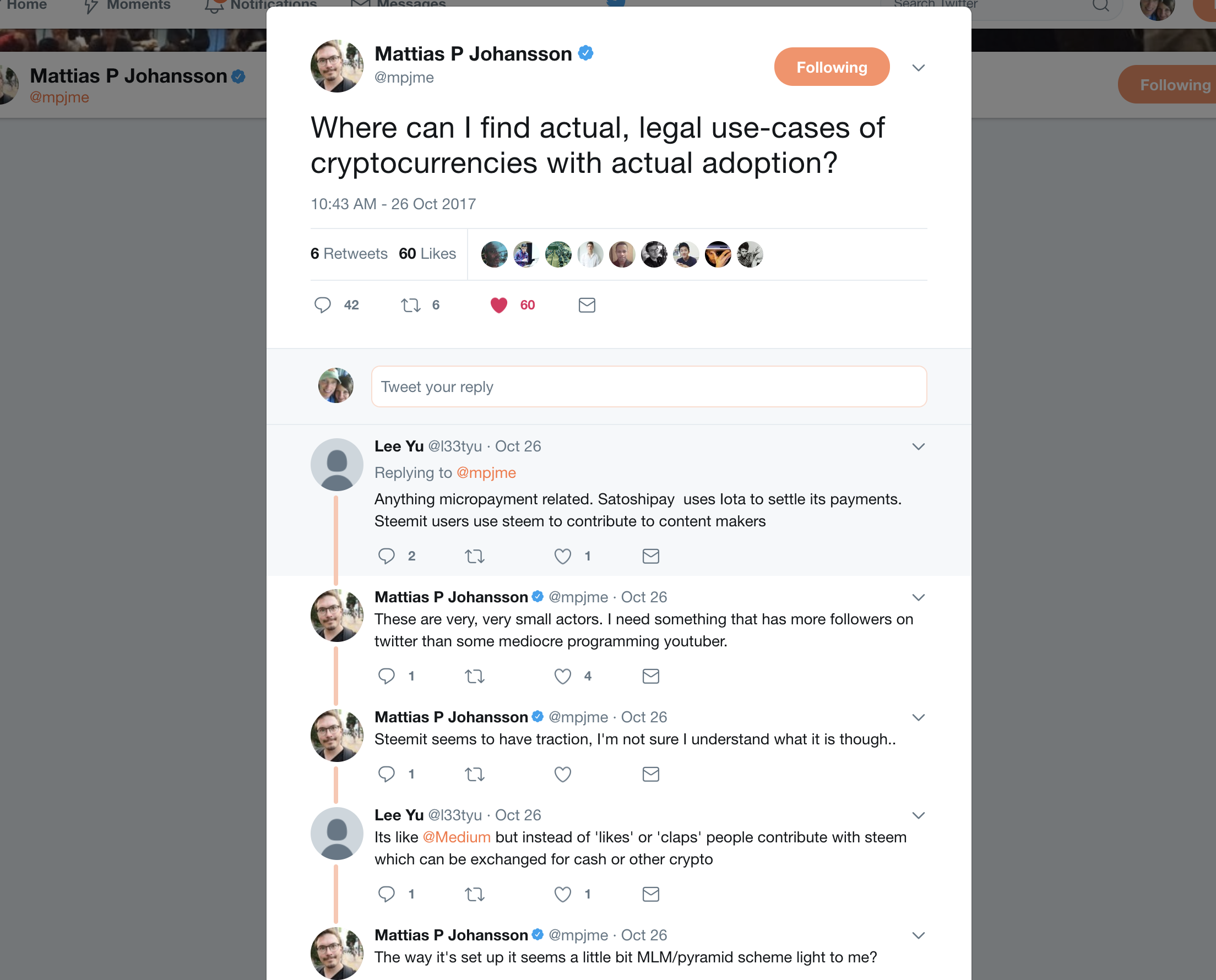 As I read back through this post I started to feel that I might be too hard on Bitcoin. Bitcoin is solid and stable and doesn't seem to be going anywhere. Sure it could fall to a penny or go to a million. I honestly have no way to know and definitely am not attempting to give any investment advice.

Actually, I am trying to do quite the opposite.

1.] "Can we stop thinking about Bitcoin as an investment?"
2.] "Is this what it takes for it to become a true active currency?"

Also, for the record: I own Bitcoin. 😎

Don't think the majority see it as a way to transact apart from DW or countries with rampant inflation. In my view, for now it's still seen as an investment vehicle for most who care to research it and will not stabilise until the late adopter stage on the time curve. We should see a more accurate representation of the true value in future once a wider segment of the population accepts and embraces the concept of blockchain technology, which is currently under way. In the meantime, I'm holding on for the ride!

I ❤️ Bitcoin too