Bitcoin uses private keys, public keys, and digital signatures
• Private key- a randomly generated 256-bit string of numbers and letters that is a secret. Whoever owns the Private key has full access to the funds and can send and receive Bitcoin. Private keys must never be shared with anyone, otherwise, you risk the funds being accessed by an unauthorized party.
• Public keys- calculated from the private key and can be shared in order to receive Bitcoin. A public key can be used to determine if a signature is valid and belongs to the private key.
• Digital signature= created mathematically using both the hash and public key. The signature verifies the transaction in the public ledger. It only allows the owner of a private Bitcoin address to transfer funds to another valid address.
Transaction Signatures
Bitcoin is a virtual currency based on cryptography, more specifically the Elliptical Curve Digital Signature Algorithm (ECDSA). Digital signatures are the public-key primitives of data authentication. In the physical world, it is common to use handwritten signatures on handwritten or typed messages. They are used to bind authenticity to the writing. Similarly, a digital signature is a technique that binds a person/entity to the digital data by encrypting it into hash keys.

Bitcoins Cryptographic Hash Function
A cryptographic key is created by a special kind of hash function that must use advanced encryption methods in order to make it suitable for use in cryptography. A hash function basically uses input data, often called the message, and modifies it using a practically impossible to predict algorithm or “puzzle”. The output data is then compressed into a compact string of encrypted code known as the “hash” key, the hash key can be of virtually any size. For Example, Bitcoin uses the SHA-256 algorithm, which creates a hash sized at 32 bytes. It is highly improbable that another message sequence would produce the same exact hash output. The hash function encrypts messages from sender to receiver to prevent tampering while transmitting. This plays a huge role in all security systems, especially Bitcoin. Even the smallest change of information to any input data will require the hash to be re-entered into the blockchain, therefore, must be validated by miners, and thereby a new cryptographic hash key is computed. Through this cryptographic hash function, the Bitcoin blockchain is virtually impossible to hack or crack, it is impenetrable.

Bitcoin Wallets Store Hash Identifiers
Each hash is unique and unpredictable, and each represents its own transaction. Each transaction can be confirmed by tracking back through the blockchain. The data is input into a blockchain, containing many blocks each having multiple hash inputs. The hash serves both as a form of identification and also it is used to verify it’s own integrity. Identification functions which also serves to authenticate their own integrity are known as self-certifying identifiers. Bitcoin wallets are a secret piece for its private data, which is used to sign transactions, providing proof that a sent transaction has come from the owner of the wallet and traces the blockchain to validate the balance of said Bitcoin wallet. 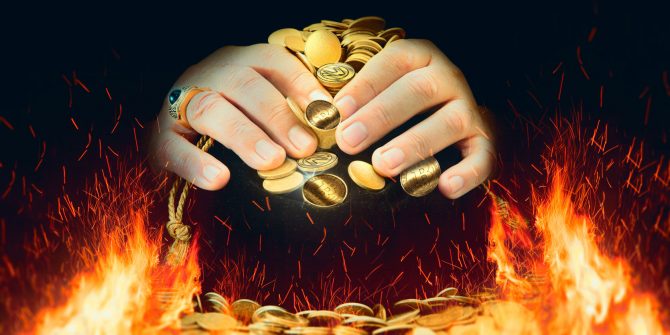