Coinbase “Ruinous Legal Trouble” For Disallowing Bitcoin Cash Withdrawals, will they face it?

Bitcoin Cash split from Bitcoin this week, debuting with a market cap close to $7 billion and quickly surpassing the $10 billion threshold. Since bitcoin cash shares a pre-fork transaction history with bitcoin, BTC holders were automatically airdropped BCH. This presented a dilemma for bitcoin exchanges since they control the private keys for coins listed on their platforms. A couple exchanges–most notably ViaBTC–enabled people to begin trading bitcoin cash futures (BCC on their exchange) before the fork had even deployed. Other exchanges waited until the bitcoin cash coins had been created, then credited traders with BCH corresponding to their BTC balance.

However, Coinbase has refused to support bitcoin cash trading or withdrawals–at least for now. As they stated in a website FAQ:

Coinbase will not support the BCC blockchain or digital currency. Any bitcoin within customers’ accounts will remain accessible on the main blockchain only. If you wish to have access to both BTC and BCC, please be sure to send your BTC off the platform by July 31….
We do not plan to offer support for the forked blockchain at this time. You will not be able to withdraw the BCC version of any bitcoin from Coinbase. Although we have no plans to support additional blockchains at this time, we will continue to monitor Bitcoin network developments.


Coinbase claims they are not keeping the bitcoin cash coins for themselves; they are just declining to interact with the new blockchain. If that changes, they say they will allow customers to withdraw their bitcoin cash:

Coinbase does not intend to support or interact with the new blockchain in any way. If this were to change, Coinbase would make those coins available for customers to withdraw, not keep them.


Coinbase CEO added on Twitter that the reason Coinbase is not facilitating bitcoin cash trading or withdrawals is that their mission is to remain trusted and legally compliant–not to be the first exchange to add a new coin to its trading platform. Coinbase was very proactive about warning customers to withdraw their BTC before August 1 if they wanted to receive access to the new bitcoin cash coins. As early as July 19, they began posting on Twitter that they would not support coins associated with the UAHF. 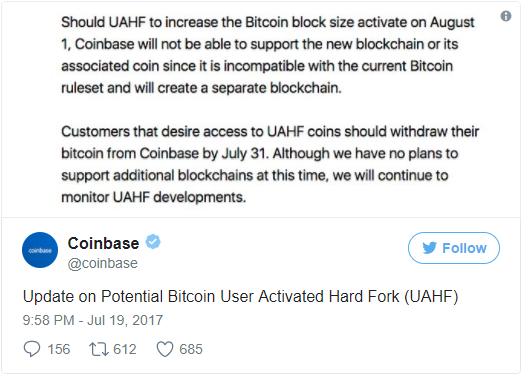 However, Coinbase experienced withdrawal delays during the days and hours leading up to the fork, and customers who did not withdraw their coins are still understandably angry that Coinbase is, effectively, holding their bitcoin cash hostage. But some people believe Coinbase’s problems extend beyond a simple public relations headache and could result in legal action.


Legal scholar Tim Wu recently stated that he believes Coinbase is flirting with potentially “ruinous legal trouble” by not allowing their customers to withdraw the bitcoin cash to which they are entitled.

Wu used the analogy of a stock split, a process whereby a company issues new shares to shareholders in proportion to their current holdings.

However, this analogy has problems. In a stock split, the share price reduces but the market capitalization remains constant since the shares still correspond to the same company. A fork, on the contrary, creates an entirely new asset with value that is at least partially derived on its own merit. This is why the total crypto market cap increased following the bitcoin cash deployment rather than remaining constant and shifting some of the value from bitcoin to bitcoin cash.