I don’t know how many times I can try to explain this to people. Why invest in a Blockchain project when you can invest in the Platform that will power that project!?

Waves is similar to Stratis and EOS but Waves is way ahead of these in terms of development.

Waves already has a large community of loyal followers and a feature rich platform which is only due to grow massively in the coming months.

I have written about Waves in the past so will just summaries exactly what I love about the platform.

Sasha Ivanov - One of the hardest working CEO’s I have ever come across. The things this guy is working on, the people he is working with is just mental from Govenment officials to Billionaire investors and he still finds time to answer questions on Slack on almost a daily basis!

The DEX matcher also allows for a user to trade ANY pair they wish. You could setup a trade for WAVES/MGO, MGO/ZrCoin ect. ect.

Once you have traded on the Waves DEX you will never want to go back! Also major DEX GUI upgrade coming in about a month! 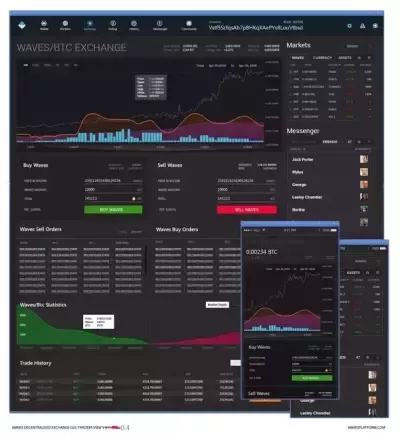 2 Click Token Creation - Create your own blockchain token in seconds and start trading it on the Waves DEX immediately. Your token can also be added to any other exchange if you wanted.

How is a crypto-currency created?

Multiple Huge ICO’s - Many companies have already run very succesful ICO’s on the Waves Platform with new ICO’s being announced on almost a weekly basis! These ICO have raised tens of millions of dollars.

Leasing - Waves utilizes the unique Leased Proof of Stake system. Which allows you to safely and securely “lease” your waves to nodes in return earning fees from processed transactions. This is like mining but without the need to run your computer or maintain any kind of node! You lease (any amount even 1 single Wave) then you can just turn off your computer and let the fees collect in your wallet.

This also mean A LOT of Waves are being taken off the “market” with around 50% of all Waves currently being leased and only about 1% of the total supply available to buy on Bittrex.

Additionally as Waves lets you pay your transaction fees in any crypto supported by the Waves platform and accepted by Node operators in the future you will be able to earn fees in all types of crypto that gets brought onto the Waves blockchain quite likely including the likes of Ethereum, Litecoin, Monero, Dash Etc etc.

Air Drops - Currently at the moment the Waves team distribute 1,000,000 WCT to Waves holders every month. At current pricing that’s worth about $2 million! Every single month! I have also received numerous other air drops including…. WavesGo, Ripto Bux, Mercury, Bitcoin (yes I have received free Bitcoin just for holding WCT!) plus loads

Boris Titov - is a Russian business ombudsman and billionaire politician. Sasha Ivanov and Boris have signed an agreement to establish a new ICO incubator entitled ‘People of Growth’ on the Waves Blockchain

Tokenomica - TOKENOMICA, will be the first investment bank which is going to work on top of the Waves blockchain, and provide 100% compliant legal framework for different types of token crowdsales, including private equity crowdsales.

HUGE Partnerships - The amount of news, developments and partnerships I cant even list everything but recently we have Waves on Microsoft Azure, Deloitte CIS & Waves Partnership, Kazakhstan Signs Innovation Pact with Waves and Deloitte

FIAT and Crypto Gateways - Waves recently launched their USD and EUR gateways with lots more in development including; YEN, RUP and altcoins such as Ethereum, which will all be tradeable right within the Waves wallet!

Future Plans -Waves also have massive plans in the works. They have delivered time and time again on promises of developing new tech. Some of the upcoming features will take Waves to the next level!

I’ll be honest, I’ve probably forgot quite a few things but this is all I can remember off the top of my head!

Waves is aiming to be the go-to platform for Tokenization. Tokenizing everything from rent-able office space (PrimalBase) to chemical manufacturing (ZrCoin). They are putting extremely userfriendly tools in place to really push for mass adoption beyond what we see as today “Blockchain” world. Once Waves has Smart Contract, NG Scalability (1000/tx per second), Anonymous transactions and a complaint legal framework for ICO’s I can see Waves becoming the most holistic, userfriendly and feature rich blockchain platform available.

And remember this is not a dream! Waves have made huge moves in development with many features already available and they are about to make serious moves within Government and within Regulatory bodies the next 6 months are going to be very very exciting times for Waves Platform.

Oh and don’t be worried that you don’t see Waves on Polo or Kraken with traders pumping prices. Why would a high volume exchange list a product which they will be directly competing with (Decentralized Exchanges). Most Waves holder are not day traders, they are believers in the project and are in it for the long haul.

There is also a great community behind Waves so I suggest anybody wanting to know more should sign up to the Waves slack channel….

Thank you for this. I'll surely be checking this one out; looks interesting.

I hope you find the information useful. I have just starting writing crypto related blog posts. Feel free to follow me on here or follow my new Quora blog... https://biggzi.quora.com/