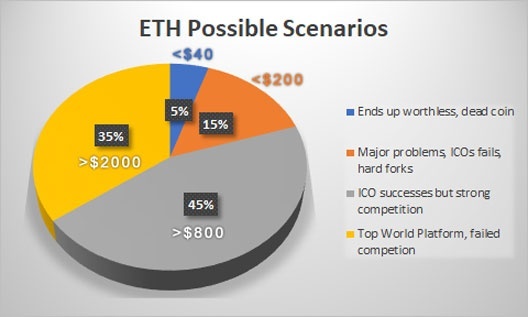 You are right, it is impossible to actually predict ETH price that long into the future.

What we can do today is figure out some scenarios and take an educated guess at the possibility and implications of each scenario.

Here are my 4 scenarios about ETH future:

The activation of so many ICOs on its blockchain brings out so serious problems that the trend reverses and no one thinks of using ERP20 tokens any more.

This type of scenario has a very low chance of happening. My estimate is <5% but if it happens it will mean ETH price crashing at levels below $40…

The majority of ICOs using ERP20 tokens prove worthless in the long run or, worse still, lose money because of unforseen bugs / programming issues with Solidity and its various implementations.

If the DAO fiasco and the hard fork of Ethereum Classic is to be repeated once more, we’ll be looking at a situation where ETH will lose its momentum and let other competing platforms fill in the void.

Given the complexity of the platform and the short time within which so many tokens were created, the probability of ETH being plagued for the next years with such problems is NOT negligible and stands at about 15%. Under this scenario, price will stay under $200.

Only a handful of truly successful ERP20 tokens and ICOs are needed for ETH to really take off.

Given the sheer number of ICOs being financed through this unique platform and the amazing response they are getting from the open market, it is very probable that we will have indeed some very successful, game changing apps within the ETH ecosystem.

However, in parallel to ETH, we now have quite a number of competing platforms that are technically superior to ETH blockchain in multiple ways or introduce widely used languages into the blockchain contracts development.

I’m referring to LISK, STRATIS and NEO to name just a few.

So, judging by today’s state of the market, I will place the highest probability on this scenario: ETH ecosystem will be the most widely and successfuly used, but with competing strong, robust and widely used alternative platforms, each cutting into ETH’s market share.

I give a 45% probability for this to happen. Under a highly competitive environment, the price of ETH should be at a >$800 level.

Top of the World Scenario:

Under this best case scenario for ETH, competition never reaches a level high enough to threaten Ethereum ecosystem and ETH becomes a de facto world wide platform for all DAPs out there.

Given that the current momentum of ETH is huge, with almost 9 out of 10 tokens being created under ERP20 specs, and supposing that no accident will happen in the near future, it is very hard for competing platforms to cut into Ethereum’s market share.

This makes me give a very high probability to ETH becoming the “Bitcoin” of DAP platforms in the long term. I’m giving this a 35% probability.

Needless to say, under such a scenario, we will be very well looking into a price of >$2000, corresponding with at least 300–400 billion USD market cap.