alphaomegaenergy (25)in #bitcoin • 3 years ago (edited) 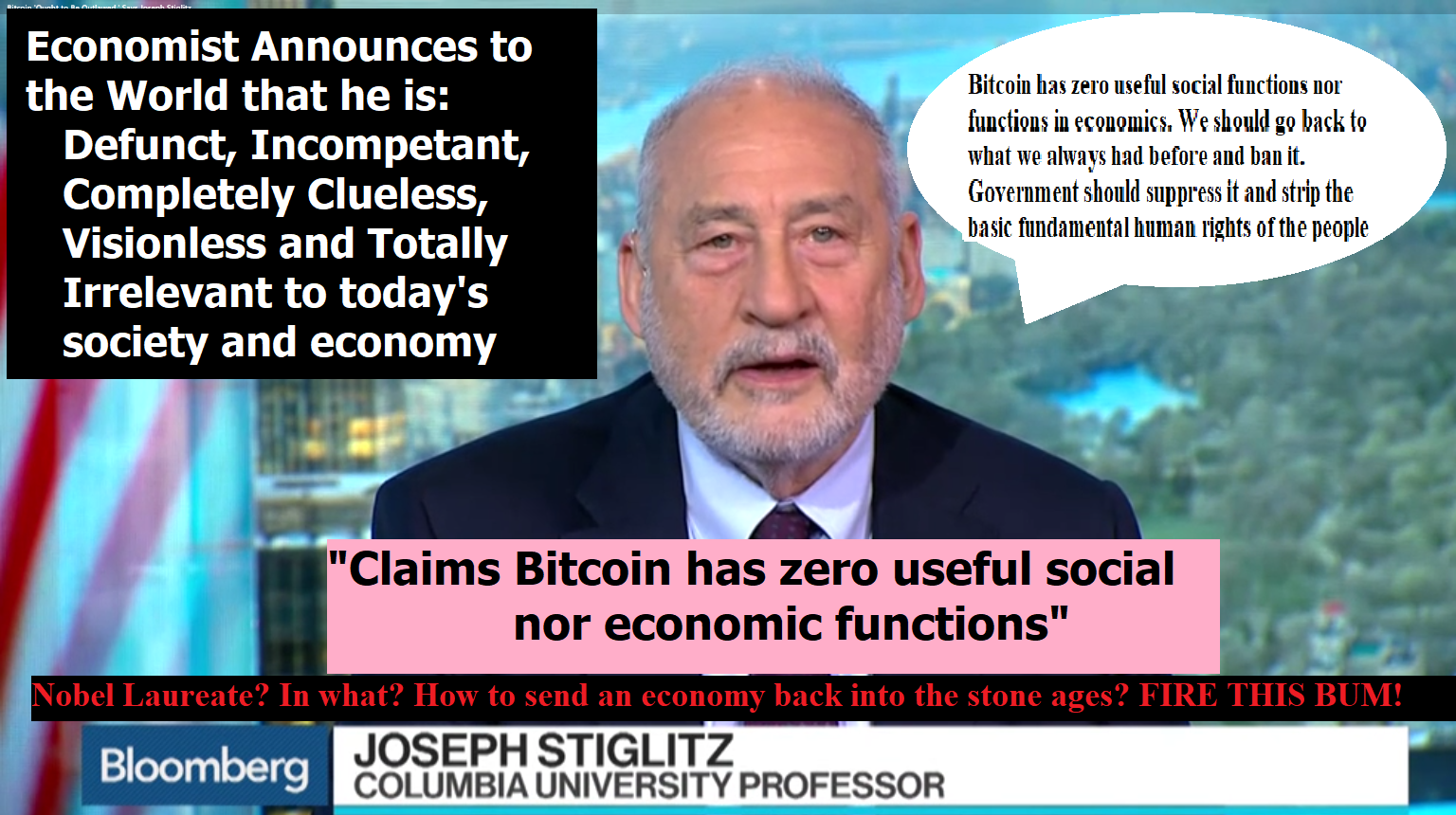 The Latest so called economist Proves his total incompetence on the job.
So called Nobel Laureate Joseph Stiglitz let every company and government around the world and every future leader in technology know just how irrelevant and totally out of touch with the basics of economics today he is, for all to see, live on television on Bloomberg.

He absolutely shocked viewers recently beginning with his droning on negatives against bitcoin and trying to convince viewers that supposedly bitcoin is in a bubble, starting with,

“One of the main functions of government is to create currency.”
Clearly he has no clue whatsoever that generally it’s central banks making the money not governments, and even in his own country, the government has nearly no say whatsoever in the printing and minting and operations of the currency markets. Also, if there was another way to do it that was better, or additional currencies added could supplement and provide some additional functions and thus even massive benefits to the economy, that this may or would be a good thing. But no, these basic concepts are far from the understanding of this guy, who must have held quite the drunken stupor party to get anyone to vote for him for anything let alone an economics prize.

“Bitcoin is successful ONLY because of it’s potential for circumvention, lack of oversight.”
Wow, clearly we can see the total lack of even basic understanding or competency here and obviously someone who has not whatsoever even bothered to look into the space. This is someone so completely out of touch with reality and what he is talking about that he hasn’t even bothered to spend any time talking to anyone involved in digital currencies like Burger King, Microsoft, Overstock.com, The World Bank, Visa, The Governments of Australia, Gibraltar, Singapore, Japan, Switzerland, Russia, Canada, Venezuela, Saudi Arabia, UAE, Lichtenstein, the UK, which are all embracing and supercharging their economies with digital currencies leading with Bitcoin, nor the massive markets like the CME, the CBOE or Japan stock markets which are also going to be trading Bitcoin futures shortly. How on earth could it be possible that someone so completely out of touch with reality could ever get a spot speaking on Bloomberg?

“It seems to me it ought to be outlawed. It doesn’t serve any social useful function.”
Again the litmus test of not only competency but relevancy is failed here for all to see, as it has virtually replaced Angel and Venture capital financing and startup financing practically overnight, democratized it and served to build massive new global marketplaces and investment and capital flow mechanisms which are driving investments into and new innovation in all kinds of technologies from Fintech to Cleantech to new media platforms to data center technology to social enterprises and it goes on and on there are literally thousands of companies who have listed on the new digital stock markets and millions of new jobs and thousands of new products services and innovations are being created all over the world at record in history pace. This guy has basically announced all over global television that he has not only zero competence to hold any position in economics or financial and investment advisory whatsoever, but even zero interest to even bother to spend any time checking any of it out or talking to anyone to learn about it but the fossil in mirror.

This website you are reading his article on, was originally shown on Steemit.com, which is a democratized blogging platform similar to medium, but in that we get paid for our content and it's readership in Yes, cryptocurrency aka BITCOIN. Before we just got ripped off and our content was taken possession of by others and we got absolutely ZERO credit for it. Now this economic improvement and development platform Steemit, creates a whole new digital economy of paid writers, bloggers, and companies which can now produce more content to get paid on it, thus further layering the economy and creating new jobs, opportunities, and economic strength and growth and jobs. This is social function and economic function in action, and in less than one day of posting this article, though not much, I earned money from this article, breaking the mindless phoney out of touch with reality BS that Stiglitz spoke. Hey Stig, I broke your impossible, now do us all a favor and take up full time bingo. You certainly have got to be better at that than economics. No doubt.

“We ought to just go back to what we always have had.”
Wow talk about an absolute regressionist. If there has ever been a public statement made of Zero vision and zero relevancy to the current economic changes and conditions and future of economic direction and growth opportunity, this is it folks. Talk about lack of leadership, talk about lack of growth, talk about lack of innovation support and innovation funding, talk about absolute total failure at the upper levels of so called leadership to drive any forward progress. This guys wants to say F the future. Well, he would hope so that we go the way of soon to be pushing up daisies Stiglitz. And for those in the undeveloped economies that need finance for basics like electricity and business expansion, that day minds like this begin pushing them up just couldn’t come soon enough.

“This is just a bubble. It’s going to give people a lot of exciting times as it rides up and goes down.”
And here comes the massive contradiction of himself, as he has been wrong time and time again on the stock market year after year and it’s valuations and cycles, while it has always in all of history, and so has the US dollar, just been on a long seemingly never-ending downward slope, rode up and gone down.”

“It’s smoke and mirrors. The value of a bitcoin today is expectations of the value of a bitcoin tomorrow.”
O.O What an absolute dope. He clearly forgot what the stock market is. Time to check Stigz into that hospital bed for alzheimers beside Malcolm Young God bless him and rest his awesome rocking soul but wow wow and wow holy rock band guvna! How could you be so completely lost as Stiglitz is today? The entire stock market is merely verbatim as he stated “The value of a stock today is expectations of the value of that stock tomorrow.” So what! So What if Bitcoin is the same as a stock? Gold futures are forward leaning also, since when have they ever been priced on today’s valuation and not tomorrows and the future of the price curve? Right now the SP500 is trading at all time record highs at 26-33x the annual earnings, Clearly trading at expectations that the value of the company will hold and underlying growth will catch up to meet some kind of sensible price to earnings multiple in future years. Wow, it is time to give this rickety old timer the boot straight into the irrelevancy pages, and in this interview he may have just done that all by himself, thank you very much for the notice Mr Stig.

“If the government says ‘look the purpose of Bitcoin is circumvention so we will ban it’, and then it would collapse.”
WOW!! OMG, did he just say that? Apparently Mr Stig hasn’t renewed that passport in a long long long time maybe longer than many people have been alive could be the assumption here as he seems to think that the USA is the only country on earth when there are in fact 239 others out there and many have legalized BTC or taken a neutral stance, and many G30 nations have moved to not only embrace it but even are taking it on as their national currency, like Venezuela is, Australia as a legitimate 2nd currency, and many others are following suit. As I type the whole world is moving to add BTC and the other near 10,000 variants and growing daily as the new innovation funding and economic growth funding mechanism it is and take the lead amongst others in this great new competition for economic supremacy and global competitiveness in the digital innovation and funding innovation spaces. The only thing that would happen if the USA banned Bitcoin, is a constitutional revolution on the streets against those who seek to remove the God given human rights and freedoms from the people like this self-opinion minded maniac who clearly has zero respect for the constitution of the United States of America nor it’s people’s rights. This guy should get the hook. Bloomberg, please don’t waste the viewer’s time with this stone age crap and these stone age out of touch fossils anymore, the people want the future and are demanding of much more intelligencia than this, thank you very much.

“Let’s move away from paper into the 21st century of a digital economy.”
Then he contradicts himself completely, wanting not free markets for innovation funding and economic growth, but no, the same stifling centralized government controlled regressionist zero forward progress policies, and for banks to control all digital development and for it to be out of the hands of those who need it the most. Wow, can someone please invent some mind-wiping cleaner for this guy’s CPU? Boy does he need it. And the undeveloped nations him cleaned asap, or a very tight muzzle on his regressionist fossilized yap.

This guy is the exact reason why people say the economists are always wrong and you can’t trust them can’t rely on them and they never get it right. Here is your in living color example why, full stop for all to see, save that mark that, university professors use it in your lesson showcasing this guy as the 21st centuries ultimate example of “The Very Holdback on Human Progress and Potential.” Replay that video so they can see what exactly is wrong in this world today and where exactly the development holdback and economic troubles are coming from.

If you want to bring your company, organization, country, and future back to the stone ages, just invite Joseph Stiglitz to speak or buy and read his books. I know I sure won’t be. We all need to leave this guy where he wants to stay, in the stone ages of a gigantic centralized irresponsible incompetent pyramid of mismanagement and irrelevancy complacency and do nothing but go backwards and block and ban and outlawing the very progress guys like him have been blocking for the last 500 years.

Goodbye Stiglitz, enjoy that early retirement in irrelevancy land. We, those of the future, are building a future without your kind of disastrous, wreckless, totally incompetent, and development destroying minds in it.

So long Old way, Its time for the New,

Alpha Omega Energy and AOECoin!!!
1,722 Breakthrough New Energy Technologies and Counting,
CHARGING onto the world stage with 157 Megawatts in orders, over 80 Orphanage, Disability Centers, and NGOs to Solar Power, and Ready to Rocket to IPO. 100% being made possible by the very much social function and economic function of Bitcoin, to Enable us to be able to tap funding all around the world in the proper free market of investments and empowerment the world of people deserve, while these old fossils insist on doing absolutely nothing but getting in the way. Get the hell off our backs or lose some damn weight, because we are going to Change Your World whether you like it or not. We are The Future and we don’t care what negative HS you have to say about powering development.

From the Futurists and the Development Chargers, Get The Hell Out of Our Way, We’ve Got The Impossible to Finish!!!

Power The Future, Change The World!!
Alpha Omega Energy,
“CHARGE IT ALL!!!”