We've reached the last step with this brew. It's been a while since I've done anything to it; actually I'm lying a bit, 4 days ago I've kinda racked the beer, I've simply moved it to a different container leaving the bulk of the sediment and hops flowers out but without worrying too much about what's left in.
So today we're at the bottling stage. This is how the beer looks now; I know it looks weird in the pic, there's still lots of hop flower fragments floating about and a thin oily layer on top from the dryhopping but it will clear after being bottled. 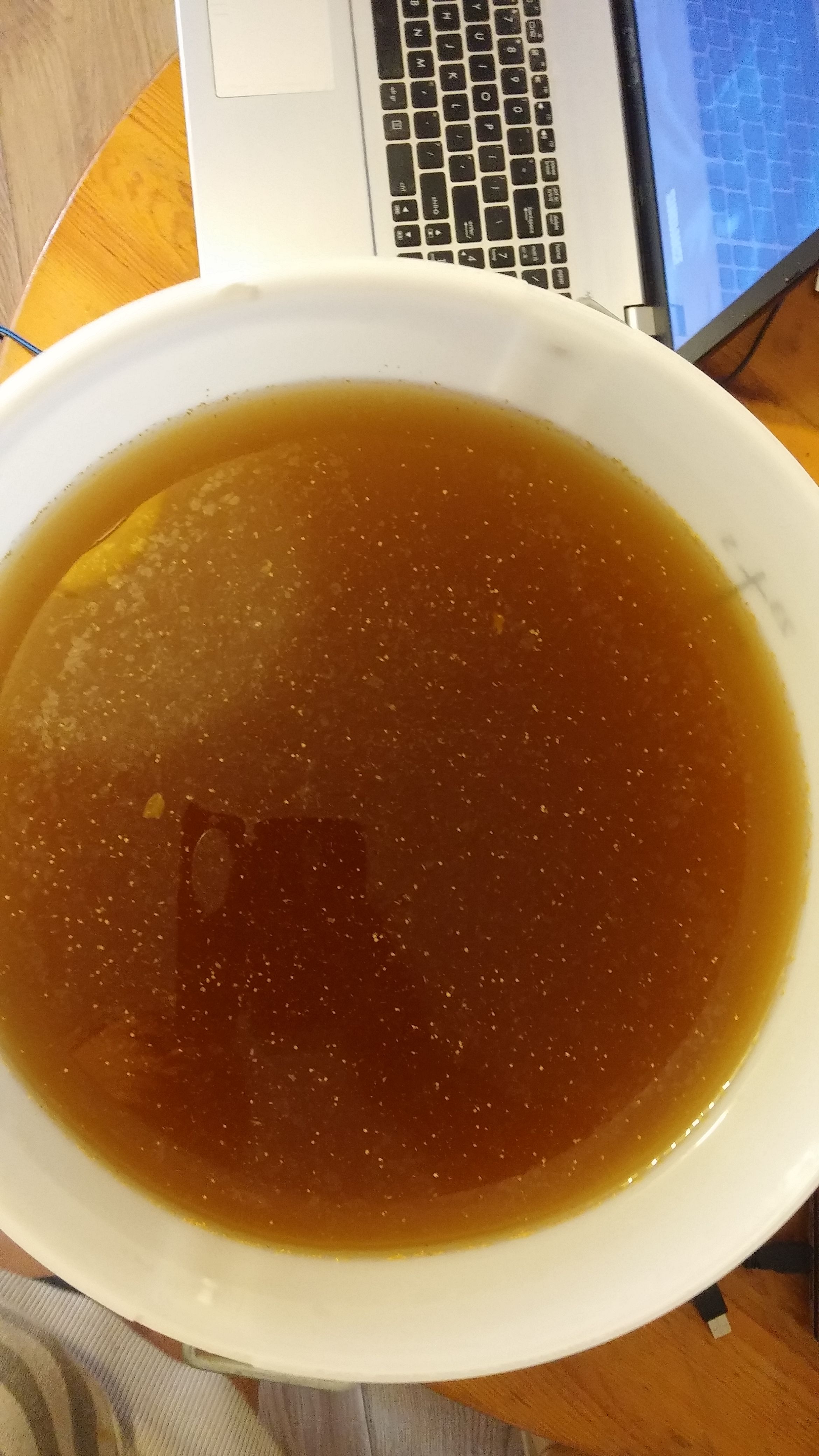 The beer itself is not looking too bad. Tastes ok, obviously really flat, but you can definitively say it is a beer when you try it. Got my bottles ready and sanitised the equipment I'm going to use. I simply put the bottles through the dishwasher, no detergent though; the heat on a glass washing program should get rid of most bad things, I haven't had issues so far doing this. 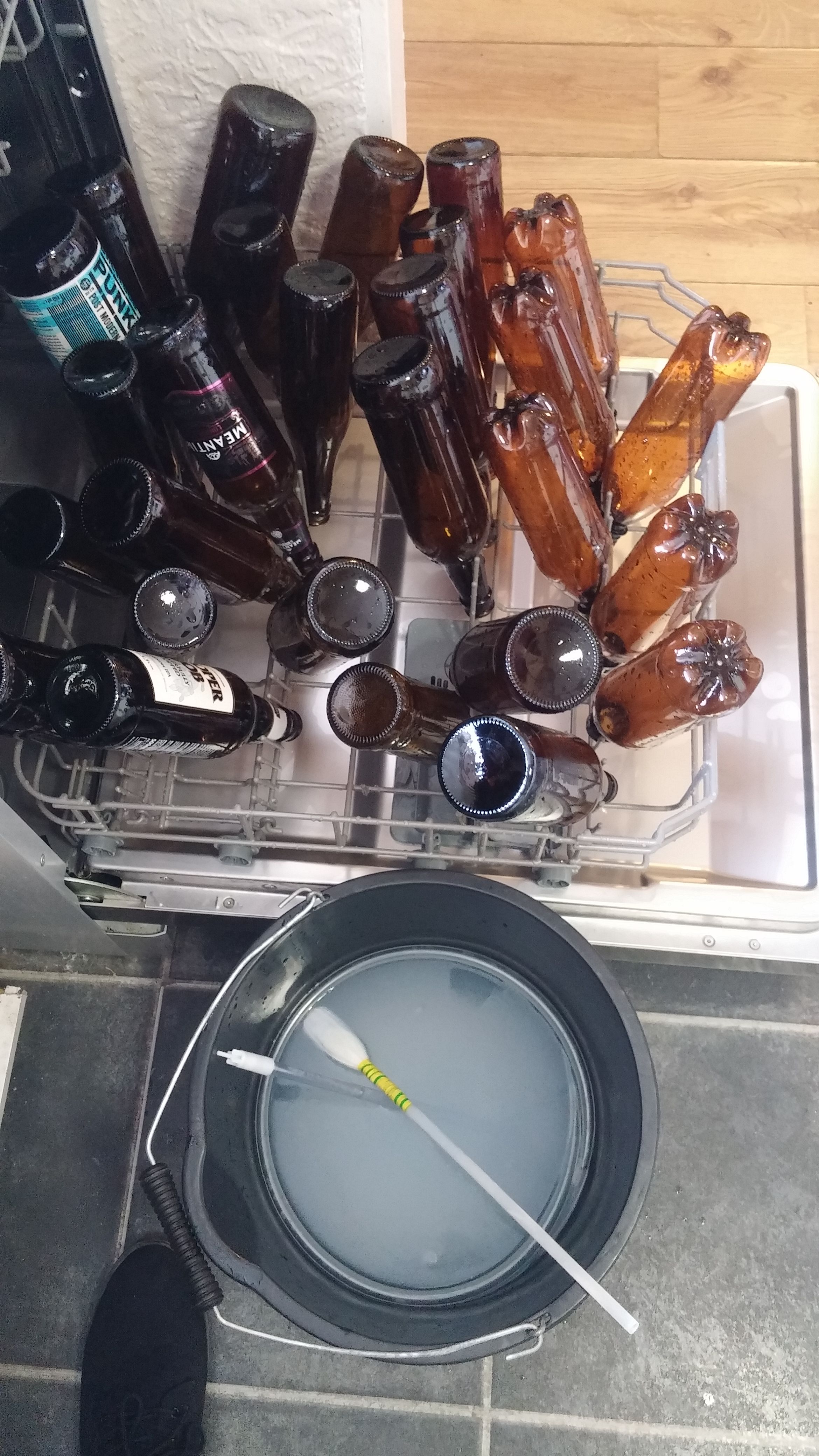 I'm using a bottling wand; it's not required but it does make things so much easier; and I made a simple filter out of some muslin cloth to stop the largest particles. For the beer to get carbonated we need to prime it. That means adding some sugar before bottling so that the yeast that's still present and alive in the bottles can consume it and turn it to CO2. I've used a priming calculator and got it up to 2.8 volumes of CO2. You could add the sugar straight to the bottles before putting the beer in or add it straight to the beer. I prefer to dissolve the sugar in water beforehand and add the mix to my beer bucket. 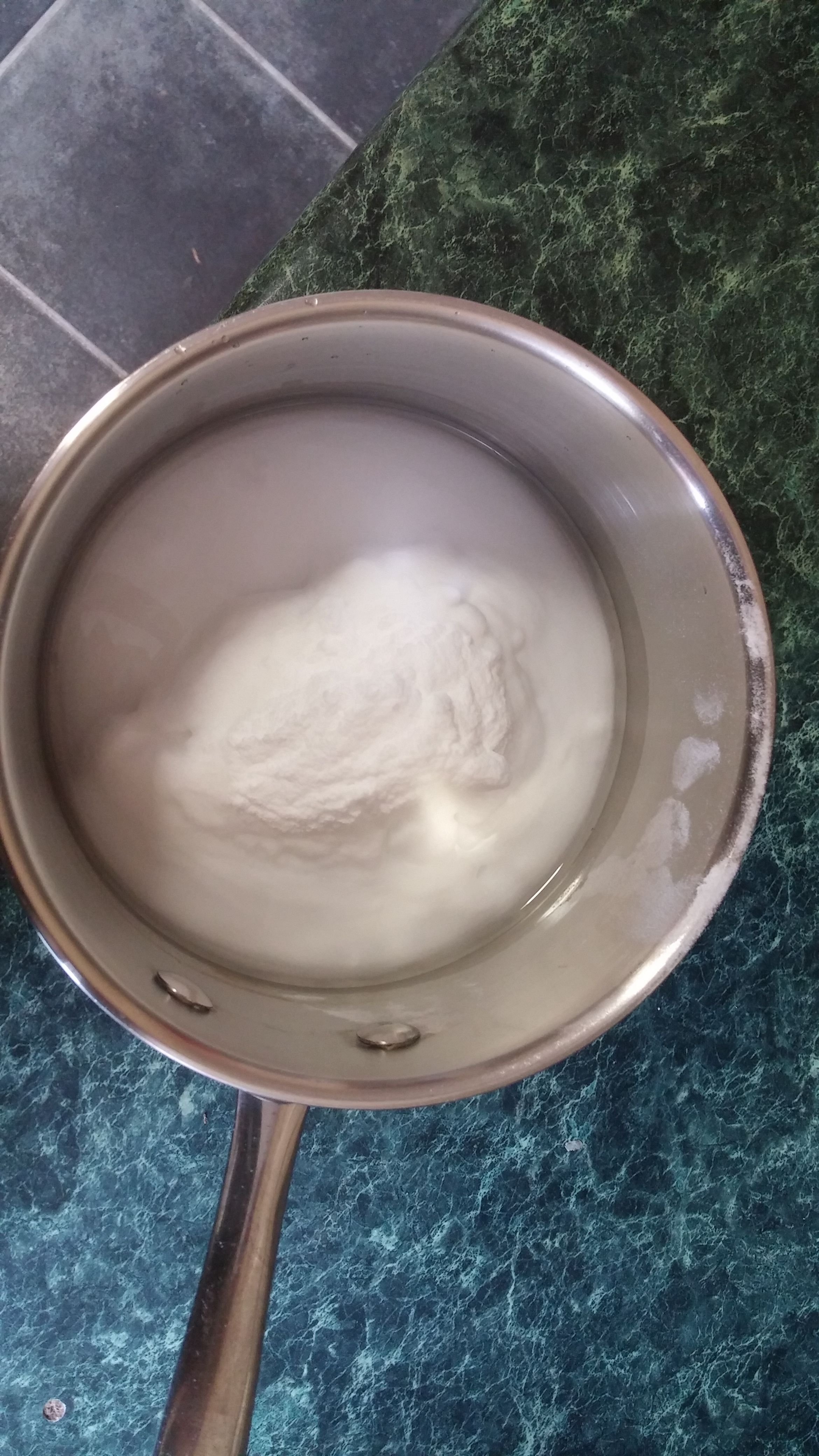 Then we put the caps on; if you've got some other brews it's always handy to colour code them so I bought blue caps for this brew and put some stickers on the plastic bottles I've used. 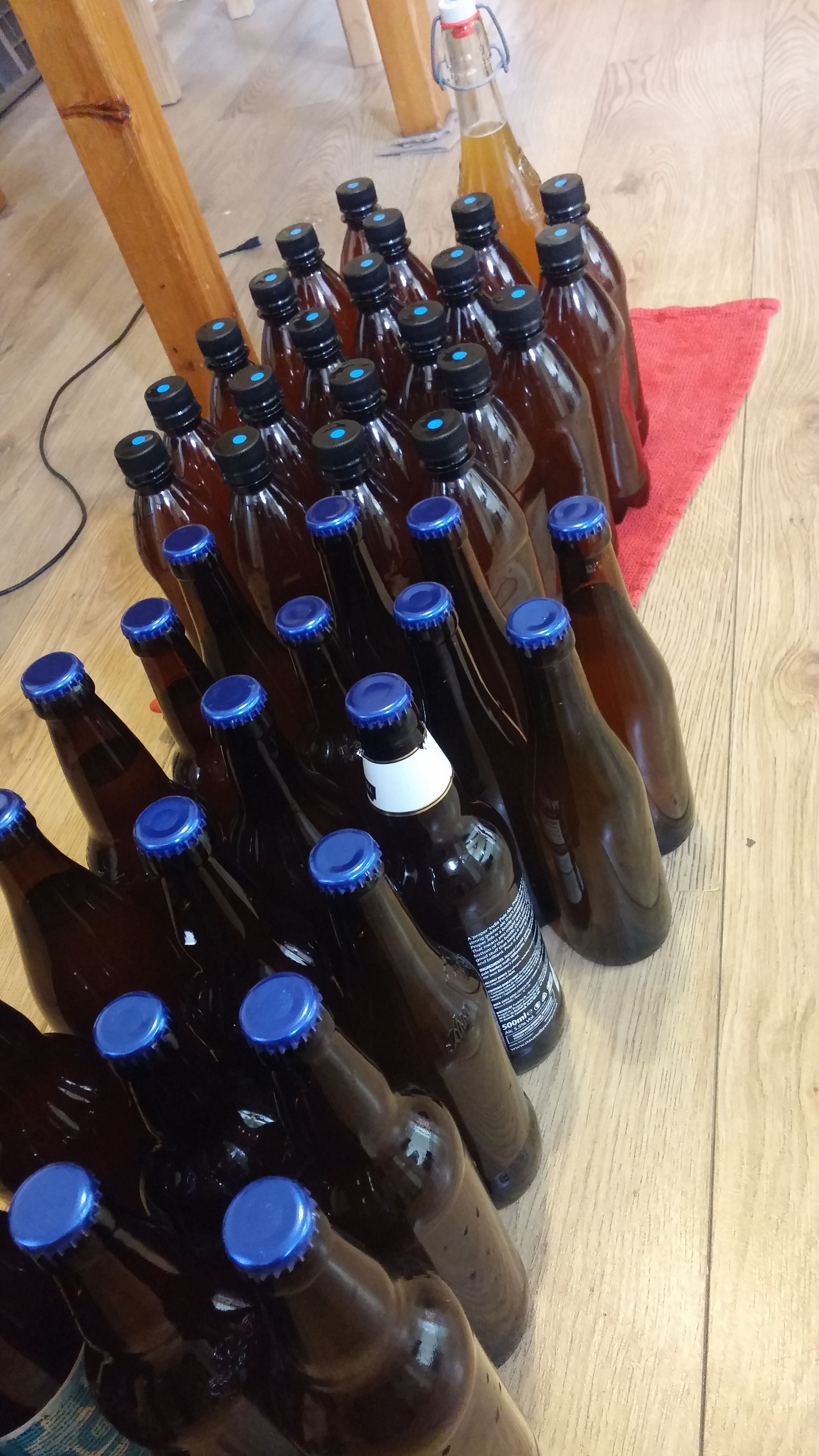 I've bottled the last beer in a clear bottle so I can keep track of how it's progressing. This beer is from the bottom of the bucket so it will be the cloudiest, it does have a nice colour though, it will only get better from now.

So that's it, well we've got to wait a few weeks for it to be ready, but making beer at home from a kit is really easy and you don't have to take as much time as I did. These kits will produce beer that's ready to be bottled in 7 days and ready to drink in 21 days, but I'm experimenting with different time periods.

My next brew will be my first all grain beer so I'm really excited about that.

Thanks for having a look guys!

Glad to see another home brewer here on Steemit!!!

And that beer looks awesome, hope you keep posting these kind of things more often, I'm trying to make another batch of beer and post it here.

I followed you and cheers from Mexico!

There's quite a few of us homebrewers around here!
Thanks you! Going to watch out for your brew posts.
Oh, today I'm going to do my first all grain brew, so I'm really looking forward to that!

Nice! I can't wait til I have space to start brewing. My flat is tiny and I have a very naughty cat. Looking forward to seeing your future posts.

Hehe, naughty cats!
Thank you! You don't really need much space if you're only doing kit beers like I have so far. I'm using my under the stairs cupboard but any space that can hold a bucket is enough really!

Do you have the means to cold crash your beer? I do that with most of my non-stouts to get the particulates out before I package the beer. In my case, I keg my beer, but it'd be the same logic for those that bottle. It allows the yeast to drop out, as well as most hop matter and some of the cloudiness.

I cannot cold crash it, I've done it in the winter by leaving it outside overnight hehe, doesn't really work now. They do clear quite a bit in the bottle after a while. Most of my beers use a wheat beer base so they'll never be really clear anyway; well I guess I could use some finings but I'm not really bothered about it.
I'm going to try and get some equipment for all grain and then the next step will probably be a kegging/keggerator setup.

The all grain route is a huge step to making better beer (at least it was for me). And kegging is a massive upgrade too. A little dangerous though, since you have no record of how much you drink like you do with a stack of bottles on the counter ;)

Heh, I guess that's the downside of kegging! But then you don't have to worry about running out of bottles :D

Congratulations! This post has been upvoted from the communal account, @minnowsupport, by Costopher from the Minnow Support Project. It's a witness project run by aggroed, ausbitbank, teamsteem, theprophet0, and someguy123. The goal is to help Steemit grow by supporting Minnows and creating a social network. Please find us in the Peace, Abundance, and Liberty Network (PALnet) Discord Channel. It's a completely public and open space to all members of the Steemit community who voluntarily choose to be there.

That is an absolutely gorgeous color in the last picture. I'm excited to see how this one turns out when you finally crack one open a couple of weeks! Still need to get myself a kit, kind of waiting for my dad to finish the wine he is making so I can repurpose his supplies.

Thank you! I'll take some pics when I'll open the first one from this batch.
Interested to see what you'll choose for your first solo brew!
What wine is your dad making?

I have been running through all the different styles I want to try since you and I first talked about it lol! I might be swayed by whatever season the brew is going to be done in.

He's making a rhubarb wine actually, my folks are overrun with rhubarb so decided to use all the extra to make some wine. Last time I was up there he had just transferred it between Jugs for the third time. I think he had 3 more transfers to go.

Hehe, too many styles to choose from, that's a good problem to have! D
Rhubarb wine, that sounds quite interesting, never had any! Racking it 7 times, he's dedicated!
I've seen this which is a good experiment and I would like to try this one, not sure if they brew it anymore though.

Yeah, he was saying that because of how sour the rhubarb is it needs a little bit more love than usual to get the flavor he wants...or at least that is what he is hoping, first time trying it with rhubarb for him as well.

Ok, I may just have to try that experiment out next year when they pick the rhubarb, sounds way too good to pass up. Now if only I could get that Saison here in the states...

LOVE homebrews! Thanks for sharing this with us!

Great step by step instructions. What kind of beer is this?

Thank you mate! It is this one.

Also...This gem of a post was discovered by the OCD Team!

Let me know if you have any questions about the project or being nominated. Hope to hear from you soon!

I accept of course, thank you!
Having a look at @ocd now

Great! You will be my nomination for tomorrow, which means, if selected, you would be in the compilation post that comes out on Saturday.

awesome buddy. I hope you join us, we just had a beer festival and I shared some pics on my blog, feel free to see them..Love beers.
You did a good job and will make a lot of money in the beer industry

Thanks mate, that festival looks like so much fun, great pics!
Dunno about making money in the beer industry, it's just a bit of fun, not serious brewing; still using buckets :)
Cheers

Haha, you start gradually and invite friends to taste after which you start marketing and it goes on from there.
Or you can do it for fun and sell to contacts.

That is a route, but I'm so far away from that.
About just selling to contacts now, I would not dream of doing that even though I'm sure there's a market for good cheap beer around but it would be against the law to do so without the proper permits and the risks outweigh the rewards in this case.
But thanks for the ideas and support!

Welcome . Let us just keep steeming and powering up. Next year we will have enough cash to diversify to other businesses.
Success to you.

The beer looks good :) bottling has always been my least favorite thing about homebrewing. So time consuming and repetitive.

It is the worst part. I envy people who have a full kegging setup up, that just looks so neat, easy and quick.
One day though... one day...

Thanks I must really try to brew my own as well. All the best for your next brew

Thank you very much! You should give it a go, it's great fun!