In a world where we are constantly bombarded by fake, edited models, we need to step back and ask ourselves, what is beauty?


Gender body expectation is a highly controversial topic, with many media sources portraying a very narrow range of accepted body types. However, to add to the already shrinking models, the retouching and enhancing of photos is now extremely common to accentuate certain features. These impossible bodies are portrayed in every aspect of the media, ranging from magazines to television and social media to advertising, having a profound impact on today’s youth.

Eating Disorder Recovery Centre, Mirisol, has stated that over 800 thousand female American citizens suffer from anorexia. This hazardous eating disorder can result in the death of up to 20% of those who are affected by it.

These alarming figures highlight the extent to which extremely slim bodies are seen as the norm by society today. This standard image of female bodies can be significantly attributed to the retouching of models in magazines. Almost all magazines use some form of photo editing software to alter models, creating impossible representations of accepted female body types.

A copy of ‘Nitro’ has clearly retouched the original image by slimming the arms, waste and thighs; changing the skin tone; altering the hair; and removing skin blemishes.

Despite most women knowing that these images are fake and unrealistic, they still want to mirror them, and therefore buy the magazines to find the ‘secrets’ to a perfect body. By creating this illusion, magazine companies sell very well, expanding their influence over people.

However, the ‘perfect body’ is an idolised image held by society and is constantly changing, currently with models becoming slimmer and slimmer, before being further digitally modified.

According to Rader Programs, a treatment facility for eating disorders, the average model size has significantly dropped. In the early 2000’s, plus size models were between size 12 and 18, however today that has declined to between 6 and 12. Many top supermodels from the 1990’s would be considered as plus size models today.

Because of this admired body image, there is extreme social pressure for teenage girls to look a certain way. The expectation burdened on them can often lead to having a negative self-image, with extreme cases resulting in depression and suicide.

The ‘Mission Australia Youth Survey 2016’ results demonstrated that almost 30% of adolescents were very concerned with their body image. This statistic was primarily relevant to females with over 40% believing it was of high concern.

Victorian Youth Health Minister, Jenny Mikakos, also believes that teenage body image expectations is a major issue.
‘Negative body image can impact on their confidence and wellbeing and lead to serious mental health problems, self-harm and eating disorders,’ she said. ‘There is no single solution to this issue; it is a complex issue.’

Clinical psychologist, Sally-Anne McCormack, holds a firm belief that the media is a key instigator in creating these impossible body images.

‘The media does play a very large role in this - they're always photoshopping pictures in magazines and on billboards, etc.’
To support this, a professional magazine photo retoucher, who wishes to remain anonymous, has expressed that every image published has been photoshopped. They believe that there are no natural photos left that have the models’ complete, original features.

Magazine editors are aware of these accusations. Lucy Danziger, editor of SELF magazine, defended her publication over claims that singer, Kelly Clarkson, was significantly slimmed for the cover of the September 2009 issue.

‘Did we alter her appearance? Only to make her look her personal best… But in the sense that Kelly is the picture of confidence, and she truly is, then I think this photo is the truest we have ever put out there on the newsstand.’ These actions are responsible for society being constantly confronted with images of gorgeous, flowing hair, flawless skin, slim waists, perfect teeth and disproportional breasts, making it is easy to see how normal women do not feel comfortable with their appearance.

However, some companies have begun campaigning for natural beauty, utilising everyday women as models and bypassing digital modifications.

Global beauty retailer, ‘Dove’, launched a ‘Real Beauty’ campaign in 2004, where they used everyday women, with normal bodies, to market their products. It has become a huge success and remains their trademark in the industry.

Lancôme, another multi-billion dollar cosmetics company, also undertook a campaign using ordinary women. Forty-seven successful women were photographed, proudly flaunting their natural blemishes and imperfections. The company did not alter the appearance of any woman via digital editing, highlighting how normal women are still beautiful. 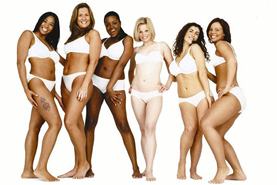 Despite these deliberate efforts, if the idea of beauty in western culture is to return to natural appearances, it is reliant on society to alter its attitude regarding this matter. Companies like Dove and Lancôme have begun to steer the industry in the right direction, however are swamped by a sea of photoshopping, plastic surgery and thick makeup.

Magazines and tabloids have a significant influence, yet only exist to make money. They do this by appealing to normal people through unrealistic promises of flawless bodies, in turn affecting mindsets. Therefore, if the perception of beauty is to change, it is up to the people.

If individuals do not adopt or aspire to these unrealistic representations, then magazines will revert to using un-edited images, changing the stereotypes of women to a more natural image.

Submit
$0.00
4 votes
1
Authors get paid when people like you upvote their post.If you enjoyed what you read here, create your account today and start earning FREE STEEM!
Sort Order:
[-]
bikergirl (60)  ·  2 years ago

It's crazy how everyone is showcased as perfect figures these days...
Learn to Love yourself!