My father, this exceptionnal man, Chapter 4 : The star 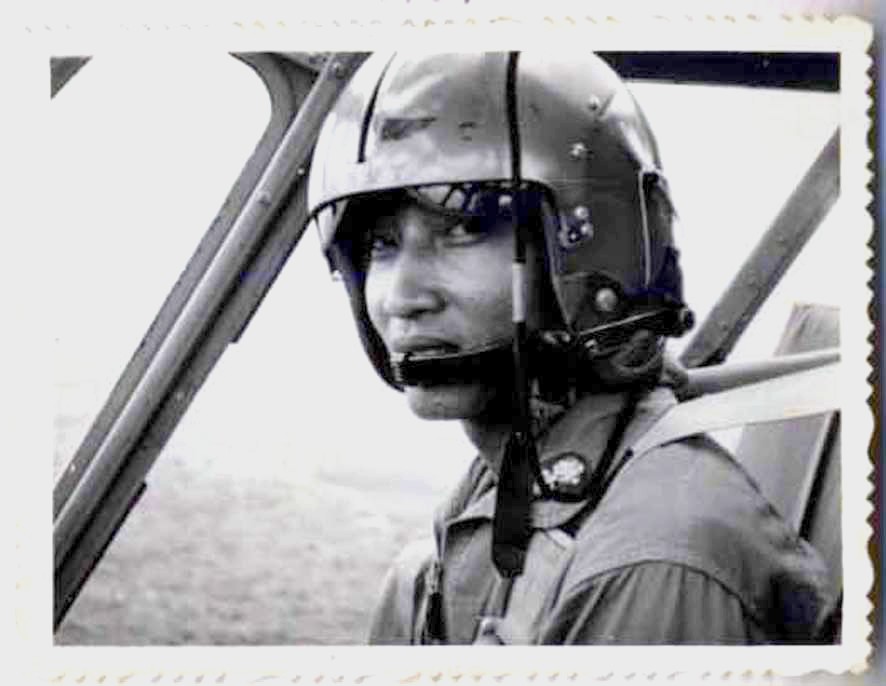 I sat stiff in the seat of my French stepfather’s tractor.
Our family rubber plantation, absorbed in the tranquility of an early afternoon, began the holy nap’s time. Some timid bird’s hum punctuated the forest breathing, while, along the trunks of graceful heveas, are licking slowly their white sap tears.

Almost no sound when, turning the start key on, I shattered this blessed silence in pieces: "VROUMM TAC TAC TAC VROUMM!"
The tractor of my stepfather coughs his candles and the engine began to purr like a big cat ... The whole village was there, around the tractor of the "Occidental Master" with his stepdaughter perched on, excited for her first time driving.

-"Miss Third!(1)" Are you sure you can drive this tractor? " the delegate of the village established on our property asked me again and again.

-"Keep calm, young Uncle (2), it's as simple as driving a car, let's bet!" I answered, more amused than concerned.

-"But if "Occident Master "or “Madam your Mother” knew it ... They will punish me for letting you drive the tractor!" complained the man.

-"My stepfather is gone on a tiger hunt for a week and my mother is off to Sai Gon for her business, I'm the only one on charge here, young Uncle!"

Surrounding to my arguments, "Young Uncle" stepped back, waving to the villagers to make place, leaving me as much room as possible, foreseeing my risky moves.
Delighted, I start the monstrous machine, now rolling forward while hiccoughing ... I pass the gear and it began to roll steadily, shaking me like a bag of rice. I'm so happy! Reaching a bamboo hedge, I stop and proud, said to the worry "young Uncle":

-"See, young Uncle, it's as if I've been driving this thing since my previous life!"

I start the rear mode forcefully and let go of the gear pedal, but a little hastily, I must say ... the vehicle drove at a higher speed than I would need and I heard shouting around me:
-"Brake, Miss Third, brake !!"

In the rush, I mixed the brake pedal with the gas one and PATATRAC! The back of the tractor hit the pole of a house, which broke down instantly like a cards castle. The shock stalled the engine and pale, I dismounted my steed impetuous.

-"Ayaaa, Miss Third, what have you done!" moaned for good the delegate of the village, which made me very quickly recover my minds. I quietly tell him:

-"Well, young Uncle, it's just a hut, no big deal! Rebuild it! Anyway, it was too old... If everyone give a hand, it's a half day business!"

"Young Uncle" did not have time to reply, interrupted by the housekeeper, heard from afar, coming toward us:

-"MissThird, your mother wants to talk to you!"

The housekeeper was now in front of us and, a little confused in sight of the tractor, the collapsed house, the villagers all around already picking up the debris, asked the man:

-"Know what?" she asked and, having understood, she smiled:
-"Your mother has just come back from Sai Gon ... But before going home, she stopped at Mr. and Mrs. Vây’s place. And it seems that she has to talk to you, Miss." finished the housekeeper, with a smile of connivance towards me. 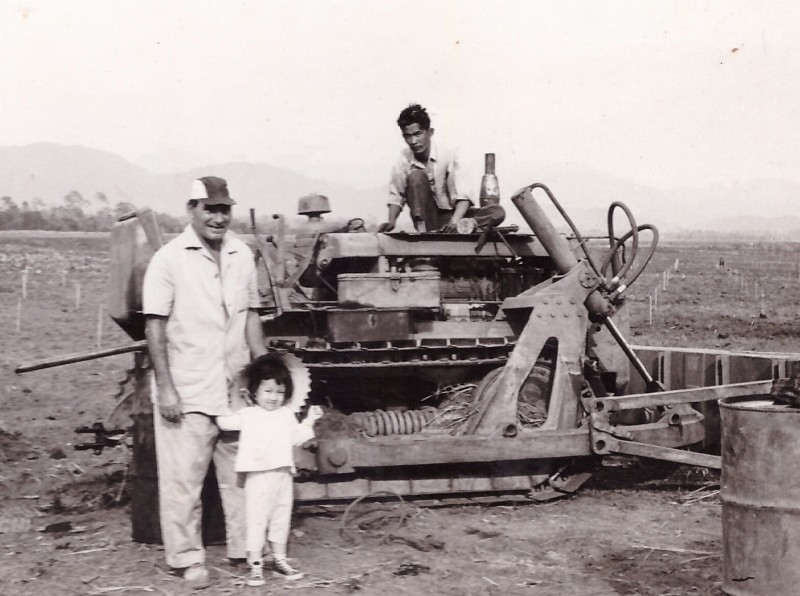 I let down everything and ran back home. But having reached my mother's quarters, I slowed my steps down and put order in my hair, my clothes: A young lady of good education must never run, must have small soft and gentle steps, hair always well combed and clothes always flawless. I did my best to reflect this image when I presented myself in front of my mother, despite the grease of the tractor blackening my white pants.

-"Ah, my daughter ... Come, I want to have a word with you." my mother did not wait for me to sit down to continue:
-"I just met Mr. and Mrs. Vây, who officially asked me to reunite our two families through the marriage of their third son and you."

I faced down, trying to hide my joy and the blush that rose to my cheeks like a blazing fire. Finally, "Grand Brother Anh" spoke to his parents about our union. My mother spoke again, this time, in a very gentle and caressing tone:

-"My daughter, know that I declined their offer."

This phrase resonated in my head like a chopper. I felt my legs shirking, when anger melted with a feeling of injustice overwhelmed me. I opened wide eyes at the same time as my mouth to protest but my mother didn’t give me the time:

-"I refused for several reasons: first, his astrological sign and yours are not a good match: He is a sign of the monkey and you, a tiger. These two signs are highly unsuited... Nothing good can occur with such a marriage(3). Secondly: This young man is currently in the United States for training as a war pilot, which means that his life will be devoted to the army, to the country and not to his family. In addition, it is an extremely dangerous job, you are likely to find yourself a widow well before the time. And third, he is very talented and brilliant, his military career will not stop at the rank of aspirant ... it means that he will be a" public man "who will have but very little time for his family, and the last reason is a military salary is miserable. I want for you a man who can assure your material comfort. My decision is made, there is nothing to add. "

I clenched my teeth and held back my tears.
But my mother knew that I was not going to surround so easily and she was right. I wrote immediately to Anh, in the United States, announcing my mother’s decision, adding that I’d rather be a nun than give up my marriage with him. A few months later, Anh returned from the United States to be assigned to Nha Trang as instructor. One Sunday off work, he visited me and my family.
My mother received him without much enthusiasm ... But as the hours passed, Anh showed such a natural, charming and happy nature that my mother was lowering her defenses. He spoke about the United States, his work as an instructor, his patriotic commitment ... Then he told her about me in his projects for our future, including me entirely in his life, without concession. The sensitivity and intelligence of my mother reveal to her an exceptional young man, noble of spirit and heart.

A week after his visit, my mother told Anh's parents that she accepted our union ... Not without warning me about the life that awaited me.

For me, it was clear: Even if I had to cross hell to marry Anh, I would do it gladly, because he was my soul mate, my brother in arms in kung fu, my karmic companion forever enrolled in my destiny.

We married in December 1956 ... The tailor made me thirteen dresses that I wore all, one after another during our three days marriage. It is believed that the amount of the bride’s dresses will increase the amount of happy conjugal years.

My mother's fears were on purpose, right from the beginning of our union: 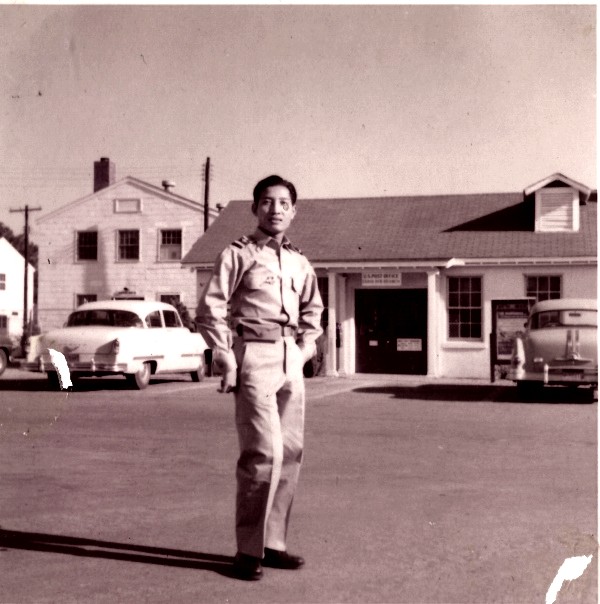 He graduated from his class with congratulations from the instructing Officers. Returning to Viet Nam, he was sent directly to Nha Trang Air Force Base (more than 500 km from our native south) to continue training young pilots on fighter aircraft but also on different types of helicopters that and, at the same time, provided personally repatriation, rescue and connections.

I rarely see him.

Aware of my dismay, my mother offered me the opportunity to visit my husband as much as possible in Nha Trang and even managed to rent a small house in this coastal city, so that our wedding life could finally begin. So, sharing my daily life with my wonderful husband, I also shared his concerns.

The biggest concern of Anh, promoted then Captain, was material: The number of helicopters in Nha Trang was only..... TWO. Two poor “Alouettes”. And less than 15 days ago, both aircrafts were damaged: one by a French officer and one by a Vietnamese officer. The two officers were degraded and sent back to Sai Gon... Anh then told me that he was in charge of the training section "helicopter" of Nha Trang but there was no more helicopter... The most frustrating situation.

After many requests, the American General Staff agreed to give helicopters to Nha Trang Air Base on one condition: Captain Nguyen Huy Anh must be in command personally, knowing his already well known flying skills. 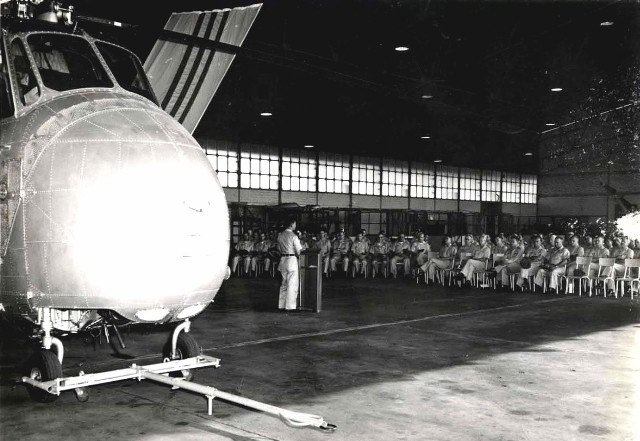 Anh in a thankful discourse fot the given helicopters, 1st Scadron.

Thus, in 1958, my husband was given the command of Nha Trang air base, "helicopter section" to his credit.
Since Nha Trang air base was equipped with Sikorsky H-19 et H-34, Bell UH-1, Alouettes II et III, it became a strategic air hub, essential nerve of any South Vietnamese Army’s movement, linking the base of Ple Ku and Ban Me Thuot. Anh invested all his soul to teach the young pilots and all those passed under his training came out with a heart filled with gratitude, patriotism and admiration for their "Alpha".

Once again, my mother was right: The family of my husband was first of all those pilots, soldiers, men who rub shoulders with him. An invisible but indestructible link united them all, and this link passed through Anh, like a star’s shape. Many pilots I had the opportunity to meet, told me, wet eyes, that they were certainly die for their Captain if needed.

Dangerous missions followed each one another, Anh always at his brothers-in-arms’ side, not withdrawing once before any danger to rescue the troops on the ground. 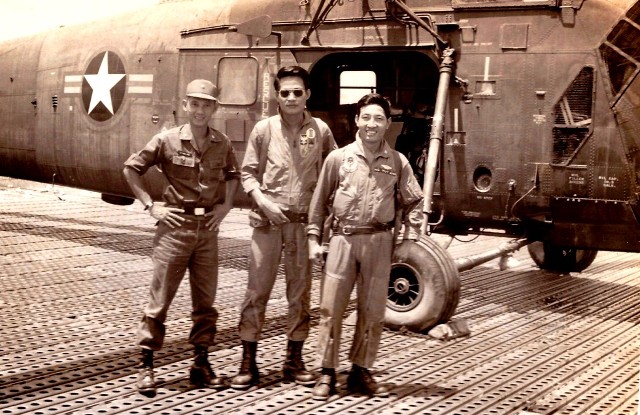 Leaving for a military mission 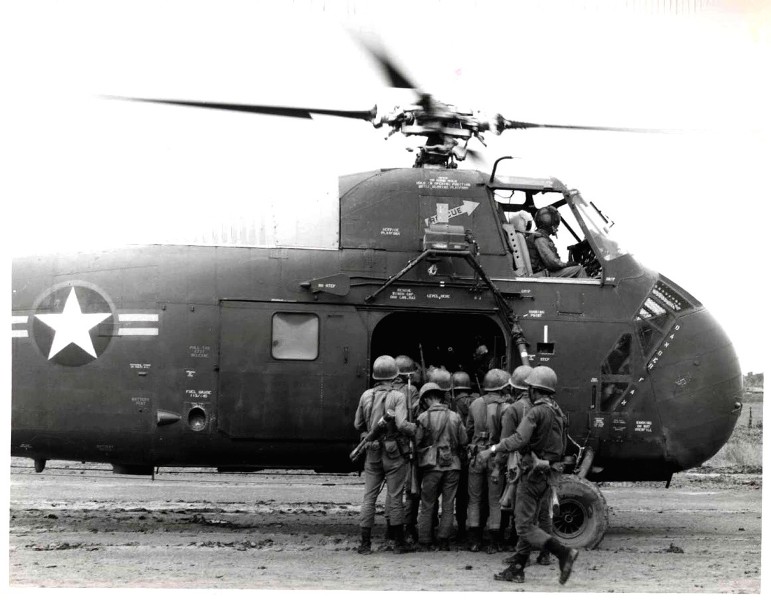 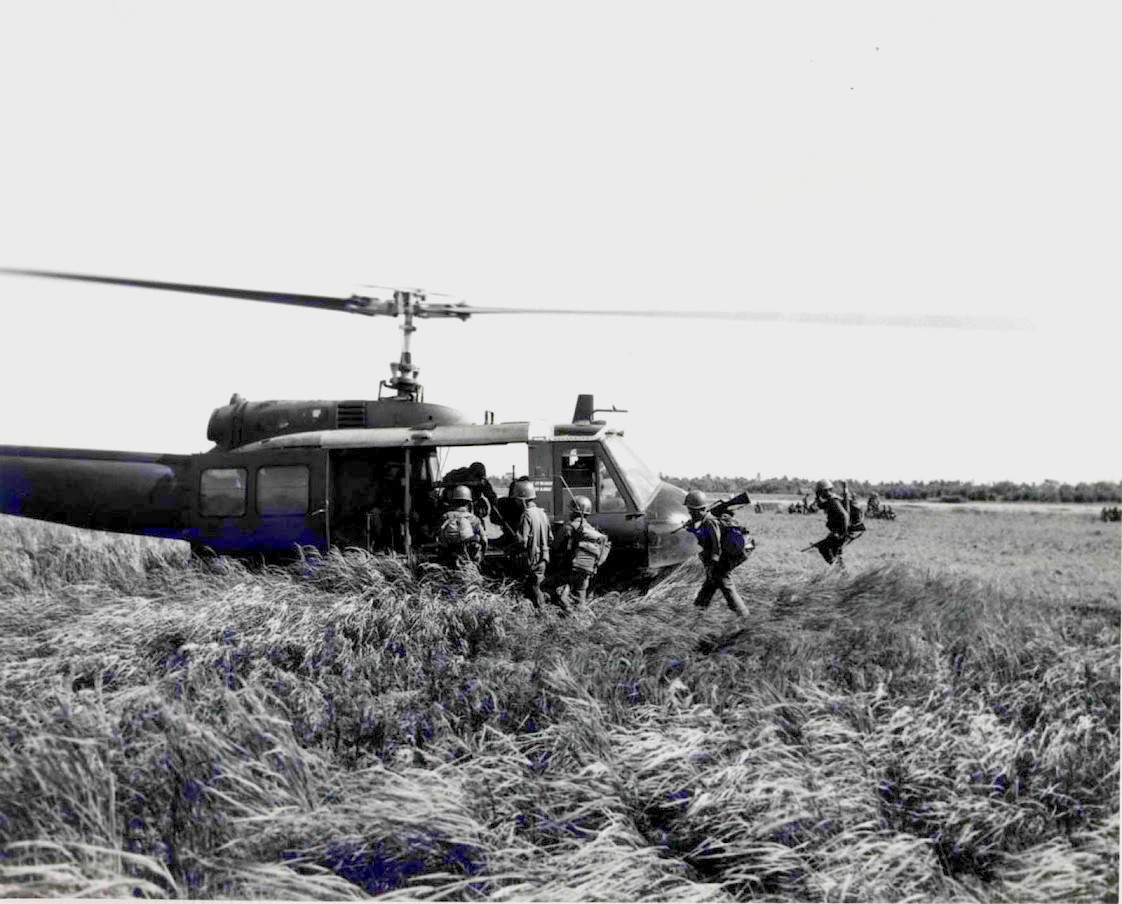 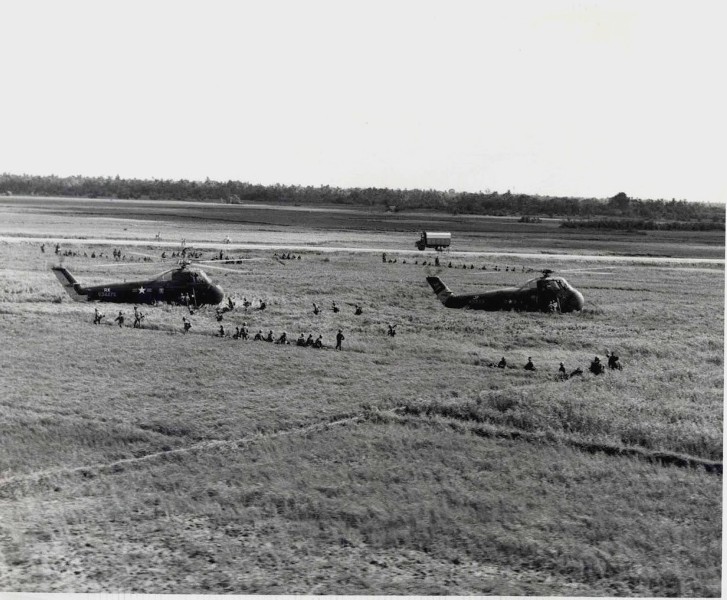 And on the ground remains his worried wife.

April 1959: My sudden nauseas and unusual fatigue were good news ... I proudly announced to my beloved husband that he was going to be daddy. Crazy with joy, Anh took me away for a flight. On board of his little Cessna, we crossed through the clouds in an ending day ... the first stars were already twinkling in the twilight. He showed me one of them: The Star, our first child.

Even at the command of his military base, even in the cockpit of his fighter aircrafts, even in the instructor seat of his helicopter, 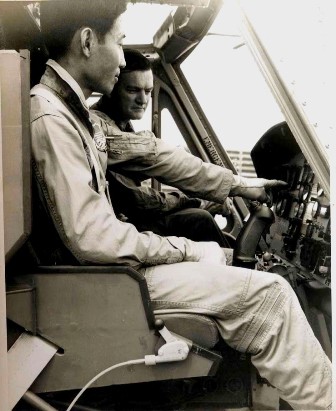 even solemn receiving his medals and military honors, even shaking hands with President Kennedy, 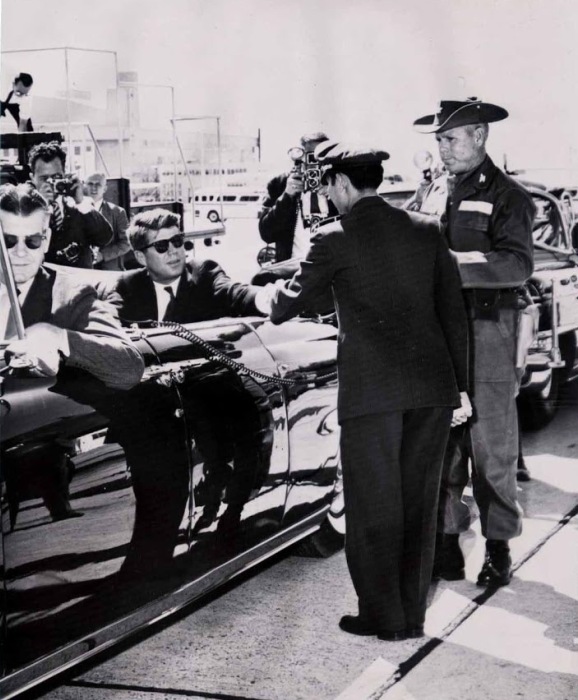 even infused with the Samurai's soul in his Dojo, he had never been so proud as when I handed him his little baby. Some months after, he left for the United States, a third time.
To be continued…………….
Thank you for reading !

(2)Home workers with big responsibilities are considered as family members. They then have the "rank" of Uncle or Aunt.

(3) Belief in astrology is anchored in Indochina and China from ancestral way. It is very common that marriages are impossible only due to astrological incompatibility. There are two pairs of signs known to never be associated, under penalty of big catastrophes in the family: Tiger / Monkey and Snake / Boar.

WOW! I need to start at the beginning of this series. It looks fascinating.

well, thank you for your concern ! I'm visiting your blog right away !

thank you... but sorry, I didn't understand what you wrote...

Feels good, I always wanted to know a bit more about Vietnam.

well, thank you for passing by ! Welcome in steemit !!

Nice history. In fact I was living in Texas too, in Dallas and then in Fortwort, In Venezuela there were Aloutte III and UH-1H Helicopters

thank you for passing here, pescalante !