A LETTER TO NATALIE

Late November 2016 I received a e-mail from a Humanities student:
Hi, I love your work and am doing a project in my humanities class about it! If you could contact me by email so I could ask you some questions that'd be awesome, thanks
​Natalie 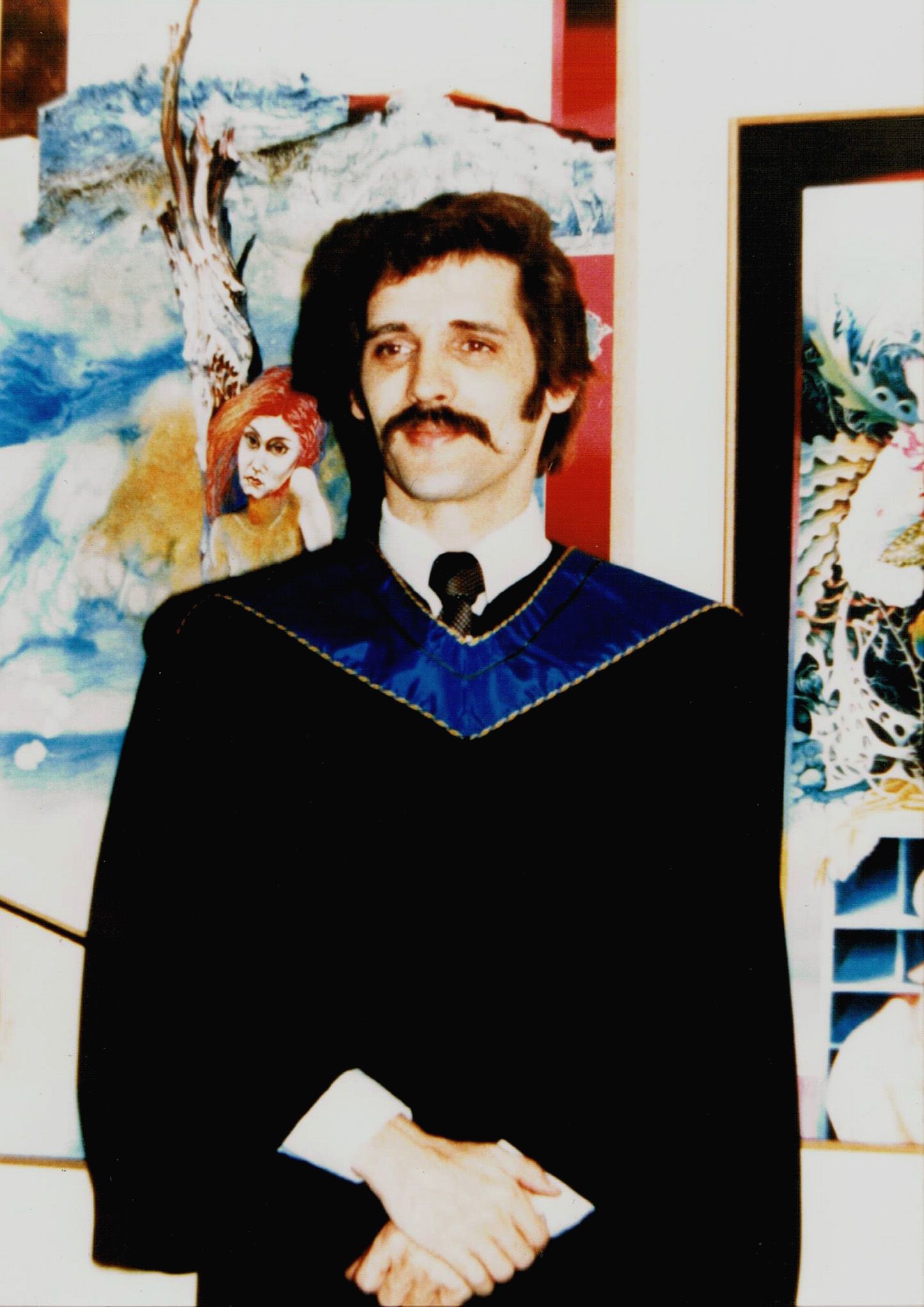 Dear Natalie, here are my answers - perhaps it was catharsis to actually put this down as a form of self-reflection:

Q: Who or what is your biggest influence/inspiration for your work?

There were many, at first is was Dali, then I learned more about the artists of my own Viennese heritage, so I was influenced by Rudolf Hausner, Ernst Fuchs (who later became my friend) - prior to this, I wrote an essay about the Vienna School. Then also by many other Surrealists, with Max Ernst being a great influence in works since the mid-seventies.

Q: What awards or honors have you received? Q: What is the hardest part of drawing and painting such intricate designs, and what do you do if you get artist's block?

The hardest part is starting with a blank canvas or sheet of paper. I draw from inspiration, so I need to 'open the gate' and this comes from making initial marks which suggest the way a piece is going to be, one step at a time. I thought about this often, how I could explain my process, and finally came up with this:
ABOUT MY WORK
"These are universal archetypes that may be found deep inside our collective subconscious. While seemingly extraterrestrial and alien, they are also strangely familiar. I take the viewer into an area that they might have been before in another existence or have entered in their dreams. It is a 'method in this madness' but everything arises by elimination of conscious guidance. The work grows seemingly by itself, like frost flowers on a windowpane. "
Artist block: as I mentioned above - I make random marks, swoosh paint around etc until I find something that points me in a direction. Any successive work is built on that, and as long as it is a trip of discovery (not knowing how it is going to turn out) I retain interest - but once I know how the story ends, I have a hard time finishing the work.

Q: How did you get your start in painting/drawing or what was the moment where you became passionate about it?

Already as a child I used to draw fantasies - my grandfather, who also took me frequently to museums and art galleries, used to have paper and sharpened pencils ready for me. I cannot remember even having any toys other than a small silver Mercedes wind-up car. The 'other world' I created became my playground. I always drew well, painting was initially a problem, but I taught myself the way of the masters, eventually. By the time I entered University (as a mature student) I was already accomplished, but there I acquired technical skills such as printmaking, and practicing figure drawing was of great help.

Selfportrait with the Critical Eye

Q: What is the best compliment you've received about your work/what comment have you received that has made you most proud?

A art critic, professor and art historian, later museum director in several large institutions in Canada and the US, J. Brooks Joyner wrote a glowing article (in the Albertan, this paper does not exist anymore) about a show I had in Calgary in the early seventies. At that time he was also a lecturer at the University of Edmonton and director of the Nickle Arts Museum in Calgary. We eventually became friends. I was saddened that he recently passed away. I posted a large part of his text on my blog: Tales from the crypt - https://artofthemystic.blogspot.co.at/p/tales-from-crypt.html Deterioration of Mind over Matter

Q: What is your goal as an artist (for yourself and/or for the world around you)?

No goal, really, other than to explore a Alternate Fantasy World - mostly for myself (ever since my childhood) but if others find something in my work that helps them enter into their own fantasies, then I succeeded. I don't tell people what they should see in it, but encourage them to pick out universal archetypes that enable them to spin their own fantasies. I admire also Zdzisław Beksiński (in these past 2 decades or so) and his way of not putting titles to his work: he does not even want to suggest by titles what people should see.

Q: What is your favorite method for creating your work?

definitely drawing. It is the most direct and fastest way to loose myself in another world. Painting often becomes too technical and takes too long: I am actually very impatient. 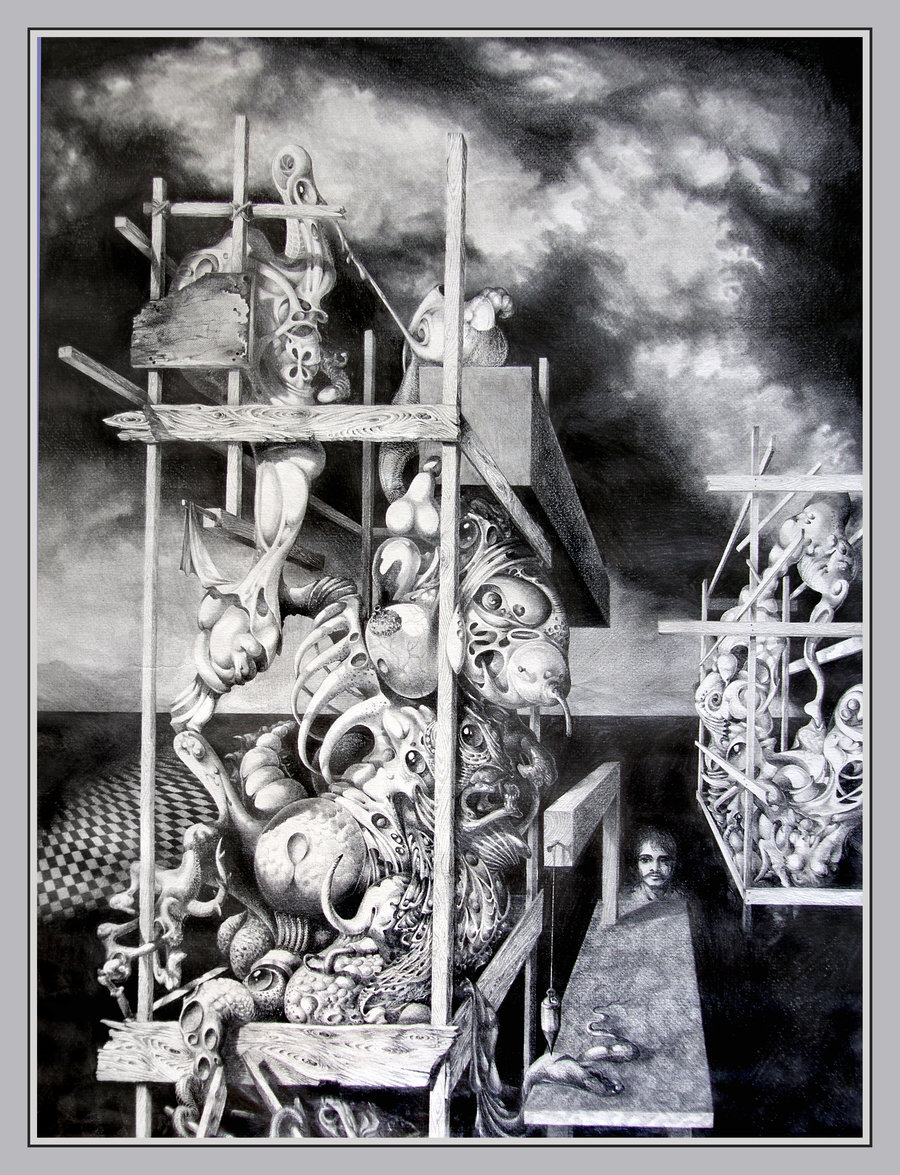 Q: Are there any interesting stories/facts you could share about how you got to where you are today?

this should be contained within the above answers

Q: Which of your personal characteristics do you think has the biggest affect on your work?

the way I can easily loose myself in daydreams by drawing - what concerns me (as far as my art production is concerned) is that in these past few years I can increasingly put myself into a state of meditation that does not even require the crutch of art.

Q: What makes you different from other artists of the time or in your genre?

I like to think that I am unique: while I readily admit to learning from the best, I don't 'copy' them. Regretfully I see some students listening very carefully to lectures (esoteric, sacred geometry and such), then start applying these religiously - worse part when they look over each others shoulder and starting to copy from each other. I don't find it hard to meditate myself into a state of visions, but understand this is not easy for others. But I also want to stress this: Drugs are not the answer. Many of my peers rely on this crutch. I say what Dali said: I AM THE DRUG

POSTSCRIPT
maybe I should clarify the last question:
about students - I should stress that it is very important to learn all the skills, theories and rules that go with it. But doing things by rote of what you absorbed learning, you won't be no better than average. Once you are familiar with the rules, you will then be able to bend or break them (but not knowing them just makes you a fool). You become an individual and stand out above the crown by making your own rules, adapting that which you have learned and making it your own.
I also forgot the conclusion: never assume that you are perfect - because then, you stagnate and at worse, become a copy of your self (your past). Always grow, always learn, always explore new things. People should be surprised every time you created something new. Nothing worse than being known for having painted clowns your entire life.

This text was originally posted on my website, Reading Corner: http://www.artofthemystic.com/a-letter-to-natalie.html