How to Make a Narwhal!

Why a Narwhal?
I was in target the other day with my partner, and we ended up in the Christmas section. We were looking at some of the more random ornaments they had for sale and found one glass narwhal ornament, but the tail was broken. This was a shame because the narwhal was a pretty cool ornament and who doesn't like narwhals? Fortunately, I've had access to a glass studio and decided to make my own.

The Narwhal
As usual, I'll include process pictures, but for those who don't want to scroll to the bottom, here is the final product: 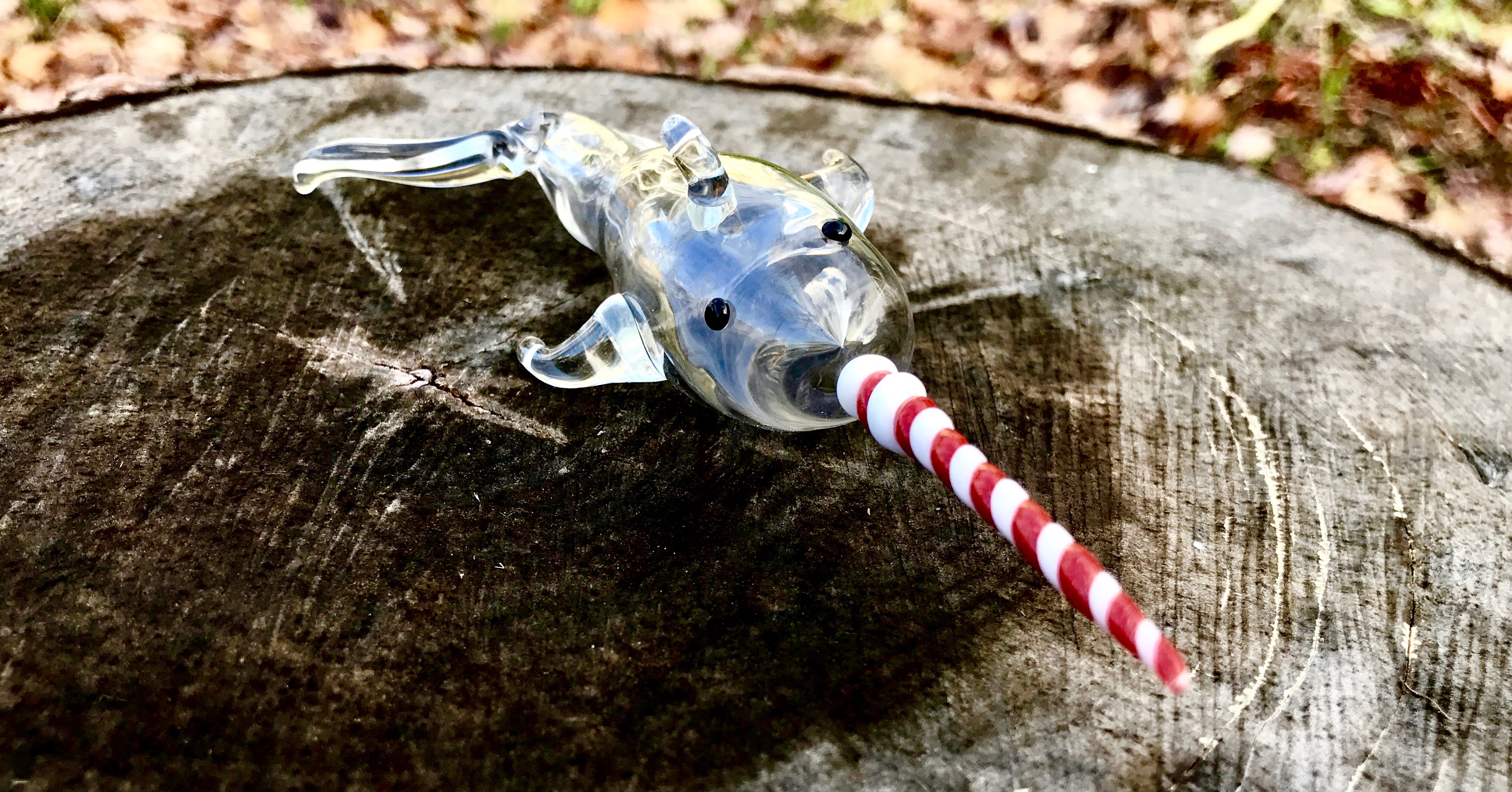 The first step in this process was to make pull the tail out of some clear glass tubing. In the background, you can see that I already made the horn by twisting together red and white color rods. That was the zeroth step/ the prep work for this piece.
After, pulling out the back of the narwhal I attached a punty (a thin glass rod used to hold the piece) to the tail and flame cut the tube to create the head.

This is the body of the narwhal. 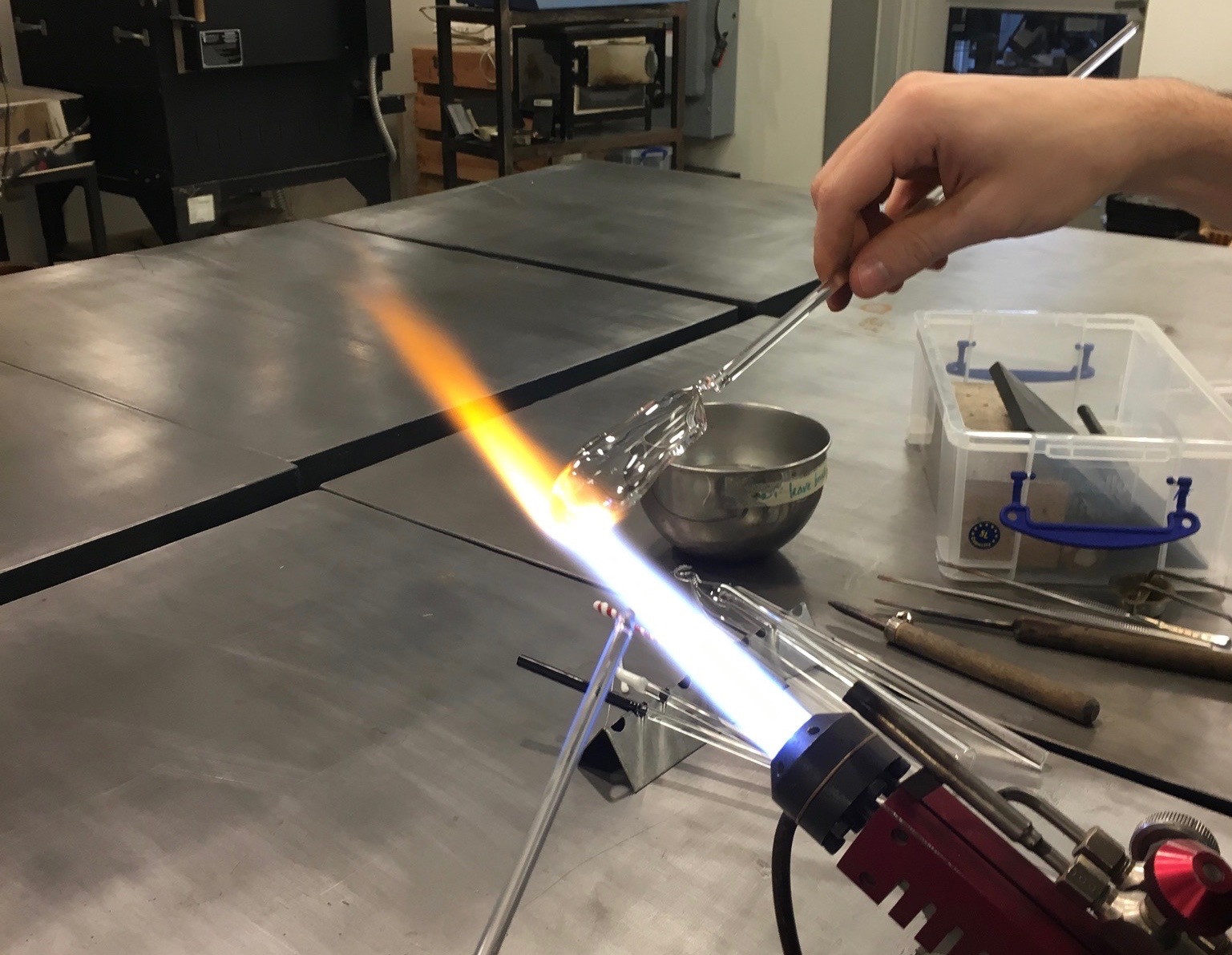 I then began making the fins for the tail. This step involved putting down the body and flattening clear solid blobs of glass. After making a flat surface, I pulled the coin shaped glass at one end to make a tail fin (a similar process is used to make flower pedals) and attached it to the back of the body. 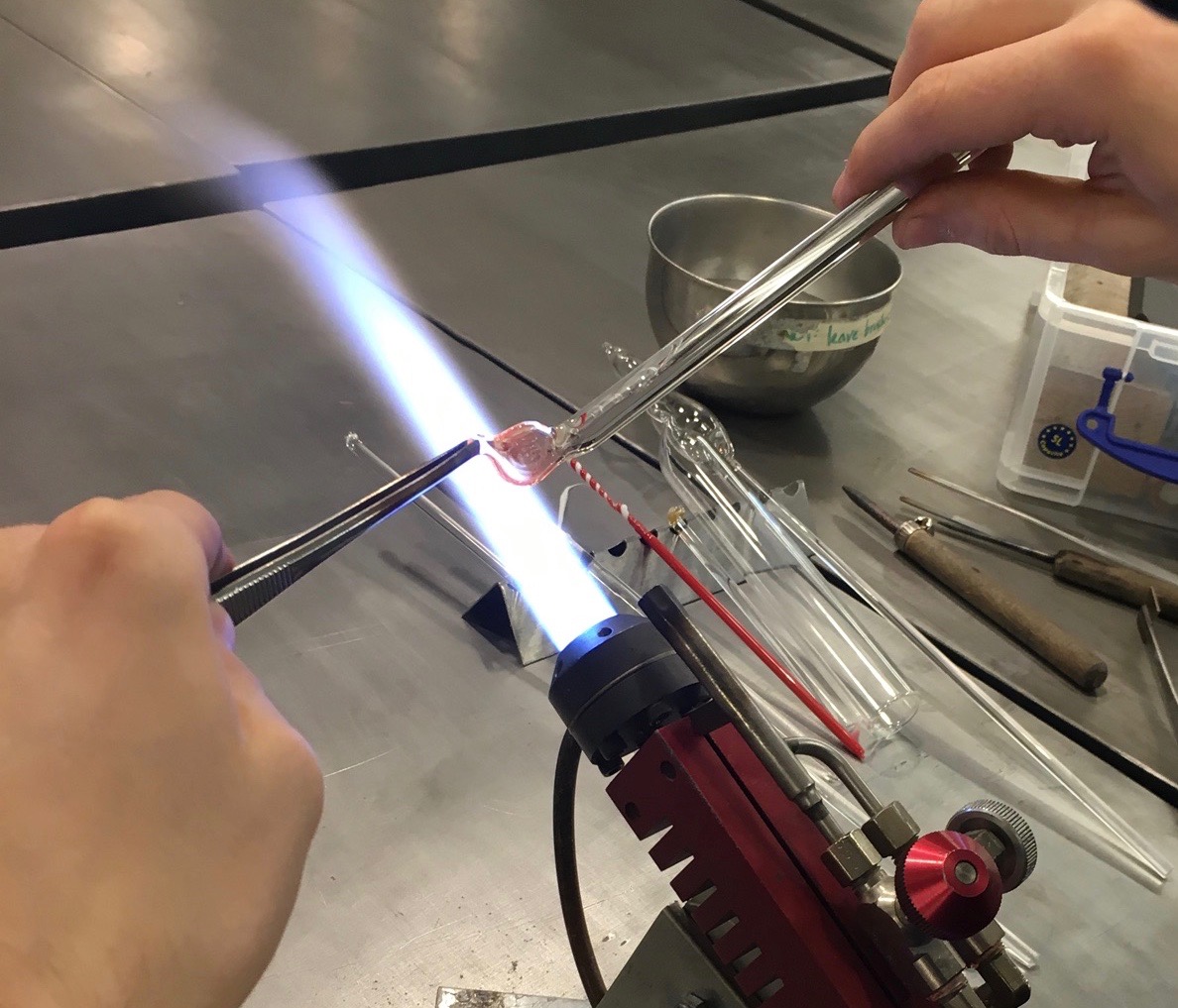 I then repeated the fin making process and attached the second fin. 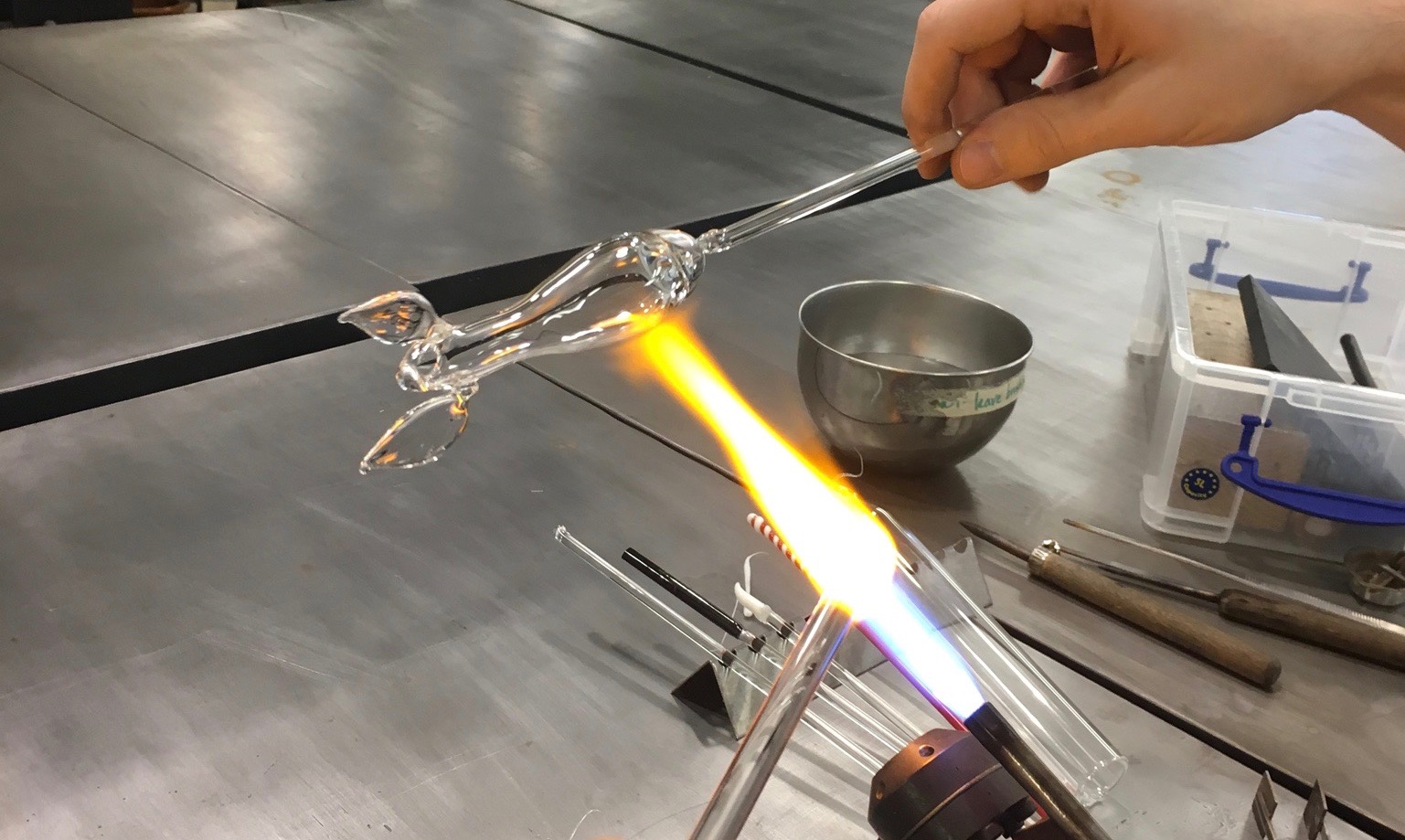 The next step was to create the pectoral fins. I wanted a slightly different shape for these so instead of flattening clear blobs of glass, I just attached a molten blob of glass and pulled it. This created more tube shaped fins.

Here you can see me attaching a fin right before I flame cut it off. I repeated this process on the other side to make the other pectoral fin.

This is right after I flame cut the clear rod from the second fin. 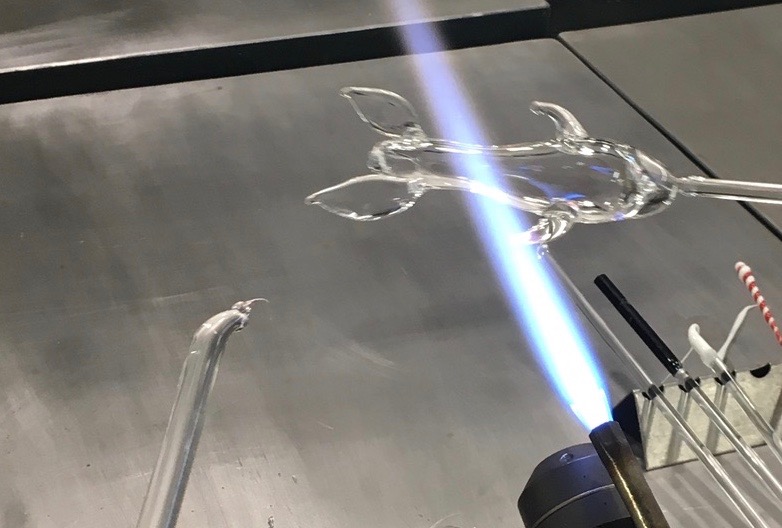 The next step was to attach the horn. I already made the horn during the prep stage, which meant that I just had to heat up the nose and the horn and attach them to each other. It's very important in this step to have the nose and the horn be very hot and similar temperatures, this way they are fused together strongly. If either the nose or the horn is too cold during the attachment process the horn will likely break off later. Next, I added the hook (or loop) from which the ornament can hang from. This is always a tricky step because glass likes to form a sphere when it is hot and the loop tries to close if you aren't carful. 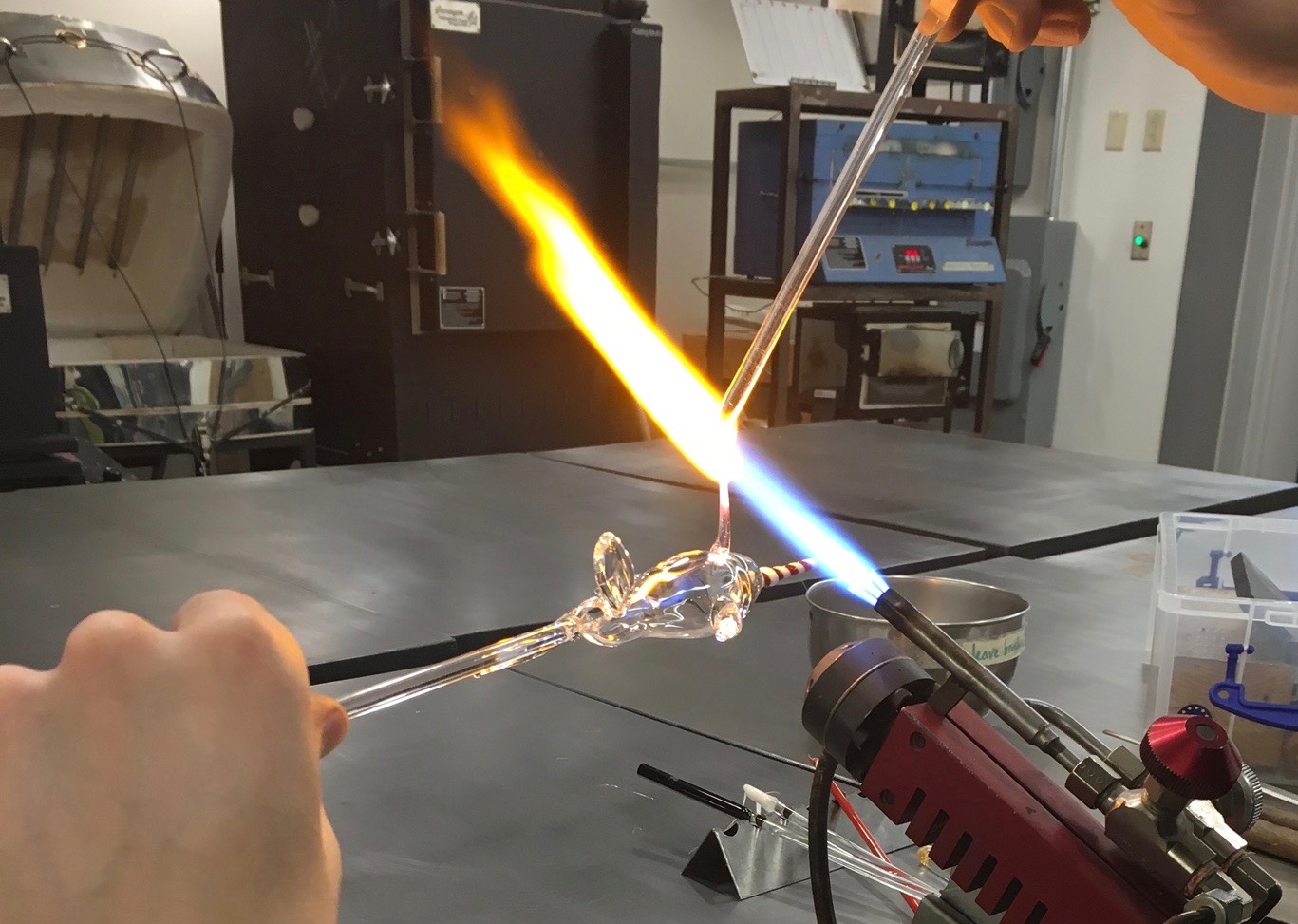 At this point the narwhal is almost finished. I just added some small black dots for eyes and thats it! I then broke off the glass rod holding the piece and put it in a kiln to cool off. This kiln is at roughly 1000 degrees Fahrenheit and cools slowly down over a 8 hour period.

Here are a few glamor shots of the final product! 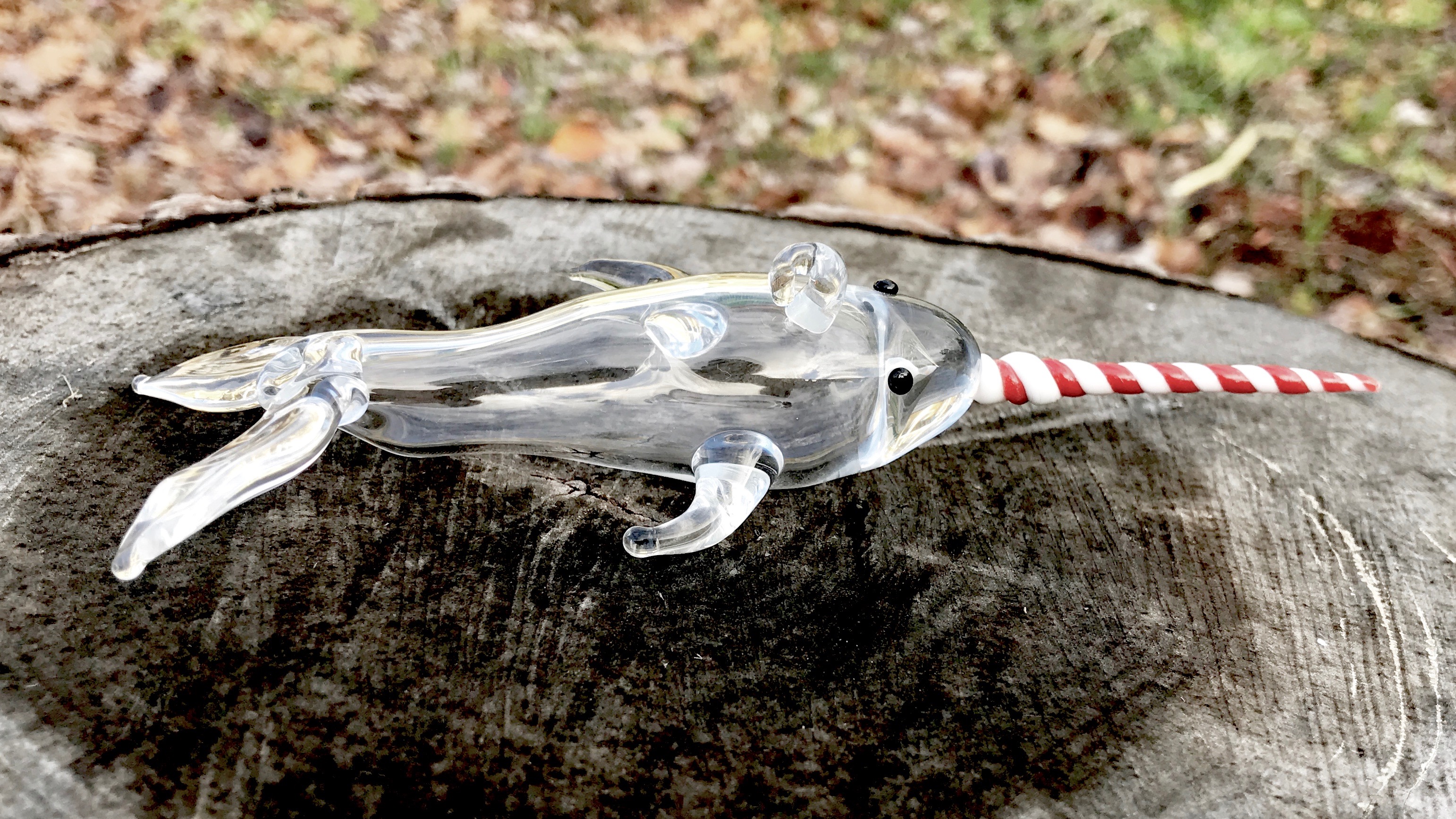 Store:
If you're interested in purchasing some of my work please comment below or check out my Etsy page:
https://www.etsy.com/shop/SteveChadwickGlass?ref=profile_shopicon&order=relevance

I can't help it but to include this here.

What wonderful glass making skills you have! I'd love to see more from you!!

lol I had this song stuck in my head for hours after making this! Excellent comment!

Thanks! I follow borgheseglass, their work is great! It's great to see glass artists on steemit.

Yes ... great to see so many great artists here sharing their work and process and actually making a little income from their content.

I know! Steemit seems like such a hack. It's a fantastic way to support artists even if you can't afford their work.

That's awesome! Yeah, I'm not wildly social about my artwork so Steemit is pretty ideal.

It's reall art.
Nice dear keep it up.

I think that glass art is very romantic art!
I followed you
see you again :)

Congratulations @spc, this post is the second most rewarded post (based on pending payouts) in the last 12 hours written by a Newbie account holder (accounts that hold between 0.01 and 0.1 Mega Vests). The total number of posts by newbie account holders during this period was 2141 and the total pending payments to posts in this category was $835.15. To see the full list of highest paid posts across all accounts categories, click here.

Wow very beautiful. How long did it take you?

Thank you! This took about 30 minutes to make. I had never tried to make one before so I'm confident with a little practice I could get it down to 20.

Congratulations @spc! You have completed some achievement on Steemit and have been rewarded with new badge(s) :