22nd Edition, Yes, we are running this for almost six months, if you have not realized. Curious, why I am doing this ? You will see it soon.

Now heading to the contest, Can you guess what is this ? Give an appropriate caption in 10 words, justify your caption in a short paragraph , and stand in a chance to win 4 SBD. Runner up will get 3 SBD, and three mentions will get 1 SBD each.

Contributions 💰 are most welcome to increase the awards.

Questions ? Suggestions ? You are most welcome!!!

Scrying the fish bowl waters, Cornelius vows to save Edmund.

Cornelius, the cat is scrying to discover the answer to a riddle posed to him by the demented red reaper. His lifelong friend and business partner has been hanging upside down for days and is close to death. Can Cornelius succeed in divining the answer that will release Edmund from this perilous predicament?

I liked this, if you could have extended this little to bake the complete story (instead of leaving the puzzle to us) , this would have been great choice.

MAD HATTER , CAT AND MONK SEARCHING FOR ALICE IN WONDERLAND! 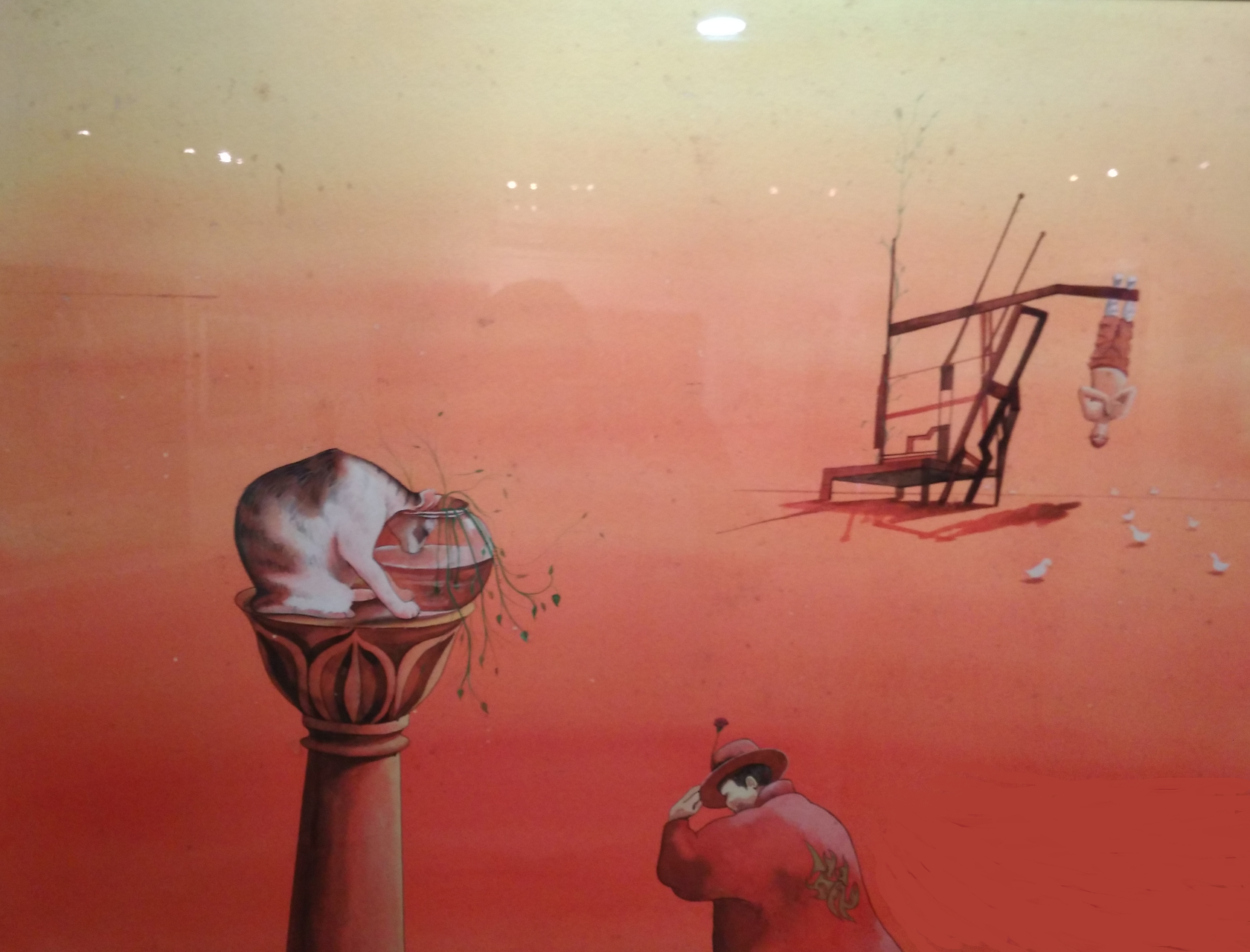 Good luck everyone !
I love this contest @sanmi ! Thnx!

Upside down world
This image illustrates an upside down world where animals like cats are put on a pedestal above humans while the person in the top right hand corner literally hangs upside down. He looks like he is being tortured. Meanwhile the fat man in the middle walks with his head down, in a rich thick warm coat that symbolizes his wealth. He is probably hurrying to his next business meeting and wanting to make more millions while the rest of the world suffers. The world he inhabits is a desolate one and a dangerous one, as the red tones of the image suggest. It is a warning to the viewer that we must not turn a blind eye to the injustices of the world and do our best to make it right side up again!

When I saw this I thought of it as a cover of a novel. Detective meets barren surrealism sort of fantasy genre. I'd read it 😂🤣 I see that guy in the back as there by choice, exercising in his "yard" while his chickens feed, although I can see why it might be taken as torture. The picture is bleak, but to me its not really dark, a stark but goofy play with reality .

CAPTION:
"World of partiality."
JUSTIFICATION:
The MAN hanging represents MANKIND not knowing what is up , caught in the CONTRAPTION known as the world he lives in .
The CAT which represents MAN is content sitting on the pedestal of which he has placed himself . He has happily buried his head in the false reality of riches and rewards , soon to discover they are as empty as the bowl , having nothing but weeds and water in which he will be drown .
The MAN in red jacket represents those who follow false beliefs and he prays to the pedestal of which he himself has created all the time baring the symbol of his God on his back for which he continues to pay monetarily for .
The RED FOG represents the blood that will be spilled and their lives that they will forfeit all because they are so wrapped up in themselves and their beliefs , they don't see the impending doom from the disaster coming toward them , they are UNAWARE and even caring if they knew .
IF only they would raise their eyes and see the light they will surely avoid their own disaster and be saved. Only the rich people in this society becomes richer and poor people becomes poorer and even kill themselves because of this hopeless world.
They keep on dishonoring poor people
..Greedy people doesn't even think that power cannot give them A single second of their life.
We are all partial in the eyes of true God .
He doesn't show partiality!
LOVE YOUR NEIGHBOR AS YOURSELF..

This is my entry @sanmi..
Thank you for reading.
Hope you like it..
By:jhen

Life is true. It flourishes above mankind under all circumstances.

This image inspired me. I saw life struggling (and succeeding) to thrive in the mist created by us humans, that live under electric lights and struggle with problems and businesses we thing are only ours. The cat and the plants, they find their way around. If anything minimal happens to this planet, we are the first species to be extinct.

Thanks for this beautiful painting!

Catfishing: the art of deceiving people

My interpretation: The image refers to the art of deception. Where nothing is what it seems. The man in the red coat hides his face but lets himself be seen as an intriguing and mysterious being who plays with people feelings. He uses the color red as an expression of passion and the flower as sensitivity. However, upside down man represents in the art of the tarot, submission to illusions and deception, lacks free will. Man is sustained by a structure without foundation, bent by the unstable of his life in search of something fictitious. He tends to be easily influenced. The little birds near his head, his inner most desires usually attached to his sexual intincts, are his dreams of attracting chicks

Title - The desert of lost things, and the mystery of Red-sands

Justification - The image looks like a scene from a book I that came to existence as soon as I saw the image (lol, in simple English, it looks like a story I would love to write about). A place where all stray and forgotten things go - the cat which everyone thought ran away from home, the fish bowl which suddenly wound up missing when swimmy (a stupid pet name I just conned for a finger-fish) died, and Grandma's old rocker that Mom thinks still sits in the attic.

The great dessert adventure with my cat and one idiot.

Since the picture is showing some redness background so i see it like a desert and there is a cat and man near the cat which is his master. The idiot one put the cat'head on the base and after that, he hang himself upside down when the cat master arrived.

@moneyinfant has added your contest to the list Steemit Writing Contests: Issue #32. The list is updated on a daily basis and your contest will remain on the list until its expiration - there's nothing you need to do. In a harsh reality, few things are as hard to face as injustice and an un-turned eye will surely entail the effort of involvement.

and the extended version: https://steemit.com/writing/@breezin/turning-a-blind-eye-towards-injustice-short-story

The picture closely resembles society... Cats are supposed to be loving, meek creatures man also but man has no qualms destroying the earth as long as his needs are satisfied, as shown by the cat quenching it's thirst in a bowl of water used to grow the only plant in the desert... by being high up on a pillar it shows the hypocritical nature of man content to always take the moral high ground when defending man's own hypocrisy...

The man hanging upside down in apparent torture is a perfect example of the pain man goes through in order to please those who we don't like, the doves flocking around him as opposed to what should normally be vultures is a microcosm of society as a whole most go through life in pains trying to suck up to people we love, want to love us or simply need help from all the while this same humans who on the outside appear to be doves, perfect beings!!! Continually prove to be the source of our sufferings...

Finally the man in a red coat shows the laissez-faire attitude of most humans we see what's wrong with society or someone but we say we'll if it ain't my problem it really ain't my business... Same human wielding a flower about to go profess his undying love for another cannot seem to share a tiny bit of that love with a complete strangers... So intent is man on himself good Samaritans exist no more...

Wake up! Do something!

Hanging man – inert, vulnerable, half naked, hands held together in prayer – trapped, contrived helplessness, awaiting rescue. He hangs from an unstable man-made contraption, representing contrived rules and laws. It warps under its own weight. Its shadow shows a man about to dive off a diving board – alter ego – to do something risky.. A vine (representing youth) grows from it. The fat man represents authority, excess, greed. He faces you with civility (ornamental flower) but the emblem on his back (fire, monster) shows he is all about destruction. He understands everything but acts like he can't see – not his problem. Weak vines grow from the fishbowl as the cat watches. Its attention is fixed on the fishbowl (television, media). It, too, is balanced on an unstable structure, high on a pedestal, a victim of its own success, a prisoner in an ivory tower. The pedestal is decorated with leaf emblems, sturdier than the flimsy vines, demonstrating that each generation grows weaker than the next, due to superficial sustenance. Red represents anger or passion, also red mists of self delusion. There are lights – points of knowledge – which can be seen through the mist, hope that circumstances will reveal themselves when it clears.

Justification: An individual hangs upside down, dying in an horrifying way and the cat drinks on peacefully while the big man walks away, undisturbed. An evil occurence has occurred silently because no one appears bothered.

Justification:
I feel like the photo shows images of three subjects who do not care about each other. The cat is trying to survive on its own by finding ways to quench its thirst. The man who is positioned upside down surrounded by ducks have a queer way of doing his own business. While a man with a hat is intentionally hiding his face from the world. The photo shows the kind of world when humans and animals or nature as a whole do not cherish or value the connection that should exist among them to create a better, more harmonious and happier world.

Hey Sanmi, I am back :D Here is my entry.
https://steemit.com/caption/@lost108/caption-contest-22-lost108-entry

You need to justify why you gave that caption :) It may be few words as well.

Oh cool, here is my justification:

Because sometimes you cannot just head up and continue, there are moments that you have no strength to hold your head up so you let things do what they are best at and in this case the gravitation is holding them down. :D