Ok I've been away far too long parenting, caring, crafting and missing steemit. So I've found myself sat here for hours every night over the last 2 weeks trying to get my head back in the game and actually write a post without getting very far at all. So yesterday I decided to get my craft on and make a Video instead.

I dived headfirst into my stash of vintage paper and photographs, Picking out a combined 437 years worth of paper moments that had been torn, foxed, and generally unloved for far too long. Set up my very thrifty camera rig (who needs a overhead tripod when you have wall cupboards and a kitchen counter!) and got to work making a loaded envelope full of embellishments for a fellow crafter. 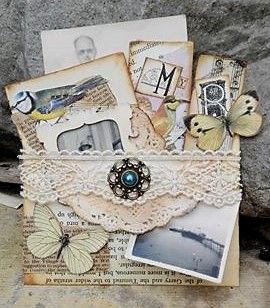 I'm telling you if I had actually remembered to hit the record button it would have been the most amazing crafting video ever to grace Youtube with it's presence.

So instead of the most amazing crafting tutorial in the history of everything ever. Your getting this, which was recorded after the children got home on one of the hottest days of the year and proceeded to bicker and argue the whole time. But I'm so damn good I managed craft and referee at the same time. Yay me!

well that's it I've finally managed to actually write something.Now while I'm back my life is still pretty chaotic, and I've promised myself I'm not going to put too much pressure on myself to post everyday. But I'll try my very best to get in and read for an hour a day.

Thanks for reading
Phoenixmaid xx

Great to have you here again with craft posts. I search for people who do crafts, crochet, knitting, etc. and post about it as I do. Keep up the good work!

Thanks creative-life it's good to be back, by the way you have a new follower. you have a great blog and I wish you lots of success here.

Thank you so much! I already followed you because of you old craft posts. Our community is small yet. I hope it will grow.

It saves a small fortune in card stock if you make a lot of gift tags etc. I don't even have to ask family to pass their clothes tags my way anymore :D

Especially old paper, I just can't get enough of it. I've made a big dent in my clothes tag collection lately, The family are now under strict orders to go shopping.

I also want to do videos about doing crafts, but I dont know how to hold the camera. How do you position the camera? This video has a very good position!

I work on my kitchen counter , open the wall unit above it and place my phone on the bottom shelf. Although the camera lens on your phone needs to be to one side of the phone. if it's in the center it's a lot harder to balance.

Okay, thank you for the advice. I will try that!

Welcome back @phoenixmaid it's hard to post everyday when you can just read other people's posts :)

Thanks cryptofunk. I was popping in but only reading a couple of posts at a time. Steem is awesome but it can so easily take over when there are so many great posts to read.

I love what you made, its gorgeous well done :)

Thanks Karen. I'm pretty pleased with this one.

You should be its beautiful :)

These are really beautiful, and a real interest of mine.

Thanks Opheliafu, They are good fun to make, and save me throwing away little pieces of history.

I really like the idea of using clothing tags. I had noticed the tags on some of the clothes I buy - they are very pretty in their own right, an interesting shape and very sturdy. I had started putting them in the button box as they seemed too good to throw away! Thank you for the ideas.

Your welcome Shanibeer, I'd love to see what you do with them.