Procession of the Species – Olympia 2018 What Is Procession of the Species?

Our family is made up of transplants to Olympia, but we've been here for a few years now, so we have experienced Procession before. First, we were spectators, but before long, we were participants in the Procession.

The Procession of the Species is organized by a private nonprofit called Earthbound Productions. It coincides with Olympia's ArtsWalk weekend which is organized by the city Parks Department is also responsible for public art and other cultural services here. The whole weekend is a very natural public-private partnership.

Last year we participated in Procession along with my daughter's preschool. The theme for our group was “Under the Sea”, so she and a lot of her friends took that as their cue to dress up as mermaids. I was planning to watch the parade from the sidelines with my dad, but at the last minute we chose to march too, carrying papier-mâché fish on long bamboo poles. It was a great time, so this year I wanted to participate again. 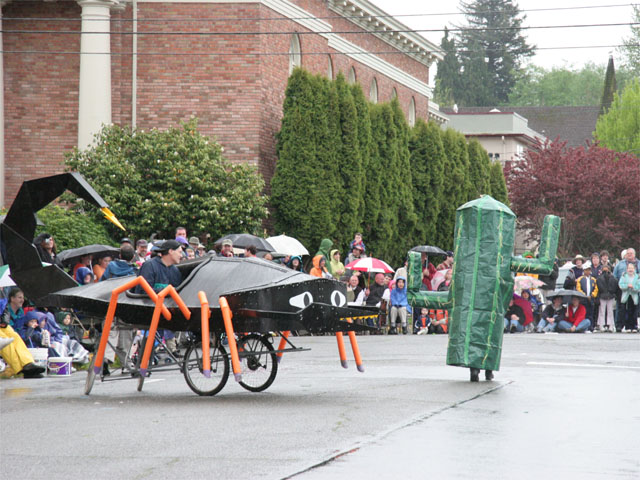 The Three Rules of Procession

The Procession of the Species is pretty wide open for participation both in who participates and how to participate. There are basically three rules:

That last rule is kind of unique for a parade. It ends up eliminating advertising, which is pretty awesome. Another perhaps-unfortunate side effect is that parade participants cannot carry a banner to identify themselves. That's by design, to let the participants' expression of their art speak for itself. And mostly, people know who the people in the parade are. For those who don't, a certain level of buzz carries along the sidelines of the parade route.

The Procession itself is preceded by two months of public art creation at the Procession Studio. The studio is open to virtually anyone who wants to participate. Participants need to abide by the three rules of course, but that’s about it.

My daughter and I went down to the studio the week before the Procession was to take place. Just walking in off the street, with no advance notice, we were able to wave down somebody in charge, and they set us up with some costume making materials.

Procession, as described by its founder

My daughter and I used lots of felt and a hot glue gun along with some other bedazzling random items to cobble together a pretty nice flower hat. Her plan was for me to wear all green and carry her on my shoulders along the parade route. (Not a bad plan.)

In lieu of a fee for joining in the Procession, the spomsors at Earthbound Productions (the non-profit organizers) collect canned food for the Olympia food bank, which distributes food to needy people downtown.

Procession of the Species 2018 - with Pictures!

Unfortunately, in the end, we did not make it to Procession this year. It was a pretty rainy day, and just before Procession was scheduled to start, we had a soccer game. The game went great, and we would've had time to get down to the parade. But it had rained all day. It rained on us throughout the soccer game, and it rained at our house up to and during parade time, stopping and starting with great intensity. We decided to skip it. But I guess that's too bad for us, because reports from downtown said that there was no rain on the Procession itself, and even a beautiful rainbow at the end. 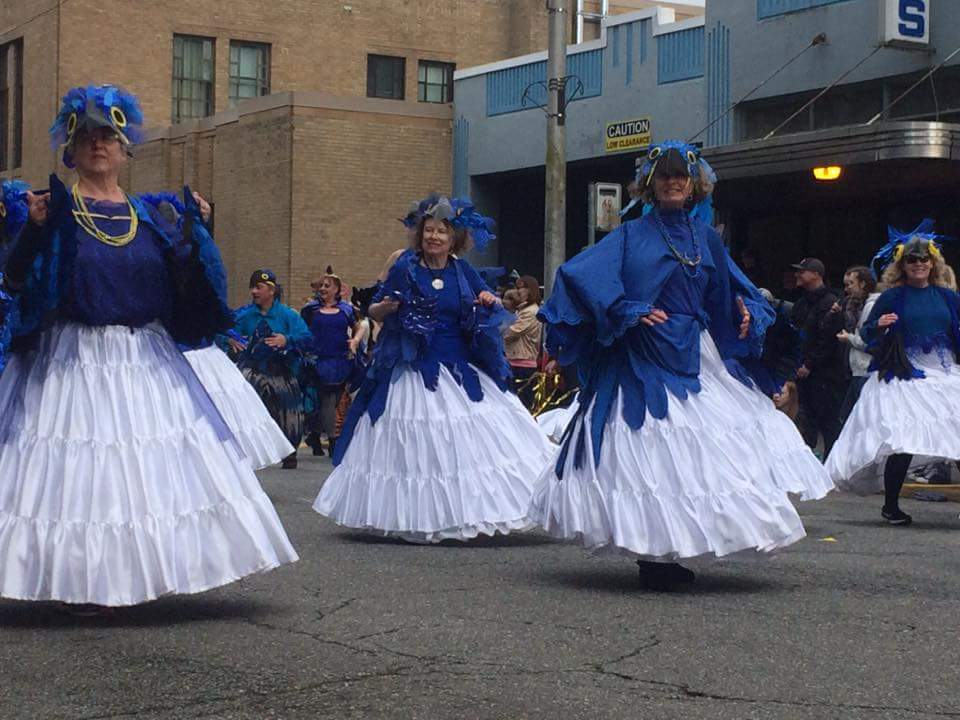 It's too bad we didn't make it this year, especially after the prep work we did in advance. Normally, the rain wouldn't have stopped us, but we had been standing in it all morning. Luckily, our friends snapped lots of pictures of the parade, and even a couple of videos. I'm happy we could share some of those with you. I missed the procession this year too, but went out that night and downtown was glowing :) A bunch of my friends came down from up north to check it out, I'm bummed I missed it. There's always next year, I suppose.

So cool an idea! I love that it is all without animal cruelty.

Look like great fun. It is good chance for a good bonding with your daughter.

WARNING! The comment below by @ilhamyus leads to a known phishing site that could steal your account.
Do not open links from users you do not trust. Do not provide your private keys to any third party websites.

Free Daily Upvote and Get 0.1 Steem Just To Sign up!