Success VS Failure: How to Deal with Them

As I said in my first article, I love watercolor. I absolutely adore the way I can put so much emotions and feeling with a lot of water and little pigments (because those tubes are expensive), but sometimes, it doesn't end how you would have expected. I think it would be a great idea to show you two of my paintings: one I find disappointing and another I am proud of! This way, I hope to show you that both success and failure can help you learn new things. Shall we start?

Here's the first artwork, the one I'm proud of : -The Lost Woman in the Snow What was the intention behind? I was restarting watercolor and I wanted to create something that gives a chilly vibe but at the same time, something comforting. I took some color references and inspiration on Youtube and Pinterest before starting to paint. I love rabbits and I really enjoyed positionning them near the red haired woman.

The Pro's- Looking back at it, I really love how I applied the color. The red and pink(the warm color) are in the same space, around the face of the Lost woman. The black,blue and grey (the cold color) are mostly in the center, where it makes the charactere looks more mysterious. Also, the rabbit and the girl's hands break the darkness and give a touch of light.

The Con's- It cannot really be seen, but it was difficult to paint the hair, because of one beginner's mistake: Putting too much water. The paper was thinner than I expected and it damaged with less water. Also, because of putting too much water, the shadow and lights around her face were messy. Then, there's also the hands. If you ever tried to draw hands, you probably know that the struggle is real... So, I quickly doodled them, but I could have spend more time on that part in the draft.

How I treated that success? I took some pretty pictures, put it in a frame and took notes about how I could improve it. Maybe by adding some snow at the bottom, as if she was buried in it?

Now, the second artwork, the one I'm disappointed: -Drowning in the Souvenir 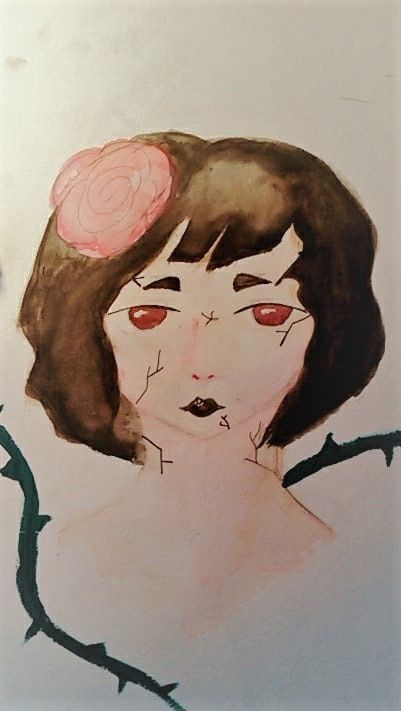 What was the story of that one? Well, lately, I've been thinking about my first year of High School and I remembered that one friend. She's really good at painting, drawing and when she wants to learn something, she do it all by herself ! I remember that this Halloween, she dressed as as a little doll, with cracks on her pale skin and roses here and there! It was strongly gorgeous but yet she looked so fragile... I couldn't take my eyes off her because it was really stunning and beautiful. I wanted to paint something that would gives a similar feeling, but I failed...

The Pro's- Even if I strongly dislike that painting, there's one positive point. Even when something is full of mistakes, there is always something well-done and in that one, it's the skin. I created a nice pale color and I chose the right undertone for the shadow around her neck, even if I was a little unsure about putting it for her nose bridge, cheeks and lips.

The Con's- First of all, the expression and drawing in general were rushed. I could have spent more time on the draft and really capture the feeling I wanted to give. Then, the color looks really flat, there's no contrast in it. Finally, I ended up making the same mistake on the flower as the Lost Woman: I put too much water and I could'nt mix the different tone of pink, white and red... Also, I should have looked some tutorials for those flowers before putting the watercolor.

How I treated that huge mistake? I took some pictures, pinned it to my bedroom's wall and took notes about how to improve it! Now, I can see that I have to put something in that empty background, work on the facial expression and pay more attention  to the details. I'm clearly going to redo it and talk about it in another post.

In my ''Artist Journey'' I chose to treat each of my artwork the same way. Both of my failure and success can teach me something and I don't want to ignore those lessons. Also, if I keep beating myself because of an error I made or because of a painting that didn't end up how I expected, that would ruin my creativity! It's the same if I continue bragging about a pretty masterpiece I made or if I only talk about how great I am, I would not improve! I think it's a question of balance: Love what you're creating from your hands but always try to find the way to improve those magical creations.

Tell me, how do you prefer to treat your artwork? What have you learned since you started being an artist? How do you feel about showing your creation?

Take care of you, have a nice day and share the love ♥

Free vote for you! Yay!

very thoughtful and meaningful paintures!
They look just perfect!
keep up the good work
resteemed this and follow you for this masterpiece
🙌🏻🙌🏻🙌🏻

I really like how you analyze your paintings. It's also a beautiful lesson in life to learn from your mistakes ... and its successes! I look forward to seeing your progress on the second theme. Continue on this path, you really have a very beautiful mind.

Amazing article. After reading your article, I want to use two chinese sentences to conclude: 失败是成功之母“failure is the mother of success” &要做一行爱一行，不要爱一行做一行“ love what you are doing not love what you want to do ”.

wonderfully done!!!!! we need more of this

wow, very colorful painting. you really brought the lady alife especially the red haired lady with rabbits losts in snow. thanks for sharing this..

Thank you for sharing your lesson in art with the community! It can be so nerve-wracking to share with others, especially sharing our successes and failures, but the approach you take is such an awesome way to learn and grow.

I think this post can be read as a way to learn in general from life's successes and failures too! 😊

Quite impressive a great emotions attached with the pieces of the pictures. Those are truly the signs of a great artist. Love this art very much.

How interesting point of view! Seeing success and failure as teachers... I have also learned that we can enjoy a lot the process of self-inprovement and if our creation made other people smile, it is a success! :D @m-mary