"Through the Looking Glass" - Original Painting & Narrative by Aloria Weaver 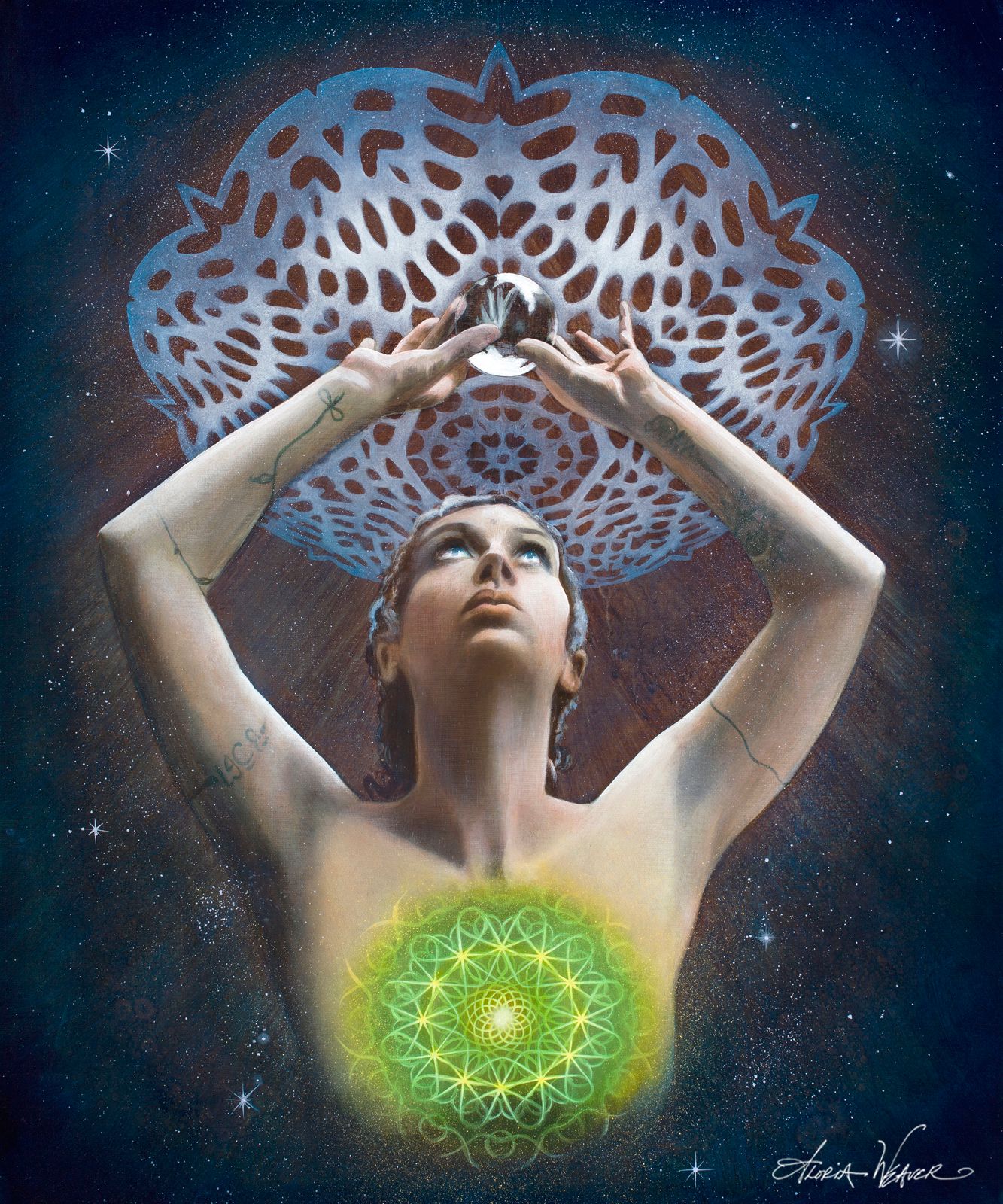 When I met Binah in the summer of 2009, she was in costumed character. She was so pure and open, we bonded immediately, the way young children do when they recognize a new friend.. with no pretense, no formal introductions, just straight into the play. With her silver-grey hair and petite frame, she had this mystifying way of seeming simultaneously like a wise old soul and an innocent child that was enough to intrigue and confuse anyone.

I visited her art studio, “Wonderland”, with its tiny little door and painted floors, just as she was transitioning out of the space. I dreamed of its next incarnation shortly thereafter, and described my dream to Binah. She called me, ecstatic, some time later to tell me that she’d found the new incarnation for Onedoorland Stew~dios, and that she’d recognized it as the right place from my dream description. Binah lived the Alice in Wonderland archetypes at many levels, far beyond metaphor.

Her curiosity was contagious and her creativity so infinite that plunging headlong into the imaginal realms was the only appropriate response. The Muse cleared her schedule to make time for Binah’s holy channel of infinite inspiration. Binah followed the Mystery whoever it lead, and magic followed Binah. She sparkled with an otherworldly radiance and everyone in her proximity was inexplicably drawn into her mythos, joyfully, willingly..

Always diving deep into a new level of alchemical initiation and personal transmutation, she was also constantly discovering artists whose work inspired her own, and then finding ways to support and encourage their work and personal process of transformation through Art. I was blessed enough to be one whose work was buoyed by her spirit and presence. When Binah left her body beneath the water, the ripples of her transformation traveled far and were felt by many.

When I received the news of her crossing, I was at the Chapel of Sacred Mirrors, working on a mural in the aptly named Mushroom Cafe. As my grief washed over me in waves, each one cresting with new intensity, the healing transformation came through the grace of painting, and the mushroom mural became the metaphoric crucible.

The fourth stage of Alchemy is the sacred process of Conjunction, or Rectification, and is associated with the planet Venus… [Entwined], soul and spirit leave the earth together, lifting a five-spiked crown (the Fifth Element or Quintessence recovered from the preceding operations) into heaven or the realm of spirit. Now, only the purest and most genuine parts of the substance to be transformed remain in the vessel. The goal of the Conjunction is to recombine these saved elements into a whole new incarnation.

Although I wasn’t conscious of it at the time, David and I were painting this symbolic description of the conjunction into the mural (left). Through the Looking Glass is my offering of grief and praise, and most of all, gratitude for knowing her.. it is a tribute to a life lived from the heart, with curiosity, creativity, devotion and determination. Binah gazes intently into the “looking glass”, a shimmering orb, a mirror, a world within worlds, intent on what lies beyond the threshold; arms stretched overhead, reaching for her higher self, striving toward the next challenge. Her physical body dissolves into stardust as her heart glows golden-green.

Elijah Parker created the Cymatics portals and was generous to share them with me.
He offers this interpretation:

The Portal above her head represents the opening of the Divine Mind and Third Eye through the goddess portal of Venus. The green portal bursting from her chest is the opening of the Anahata Heart chakra through the resonance of the Earth’s dance around the Sun, commonly referred to as the “Om Tone”: a universally recognizable vibration intuitively discovered by cultures across the globe.

These portals were created by the tone “221.23 hz” (Venus) and “136.10 hz” (Sun). Each of these are tuned by the orbit of that celestial body in its relationship to Earth, creating a geometric and magnetic alignment between self and cosmos.

Cymatics is the observation of natural art and geometric form, generated by the vibrations of sound affecting and organizing the world of matter. Specific tones played over sand causes each tiny particle to vibrate and dance into a particular shape based on the resonance of that sound.