Paris: A whale stranded on the banks of the Seine WTF ?!!!

It happened friday.
I could not believe my eyes , a whale stranded on the banks of the Seine in Paris near to the cathedrale Notre dame !!! What a shock, this cetacean of about twenty meters was surrounded by specialists in white coats examining the beast
She had a strong smell of salt, and you could see blood coming out of her mouth

I was able to have a short conversation with them and they explained to me that the whale had died that night of exhaustion, by dint of swimming .. they also said that the phenomenon could happen there is a group of Several whales in the Seine, crazy !!! 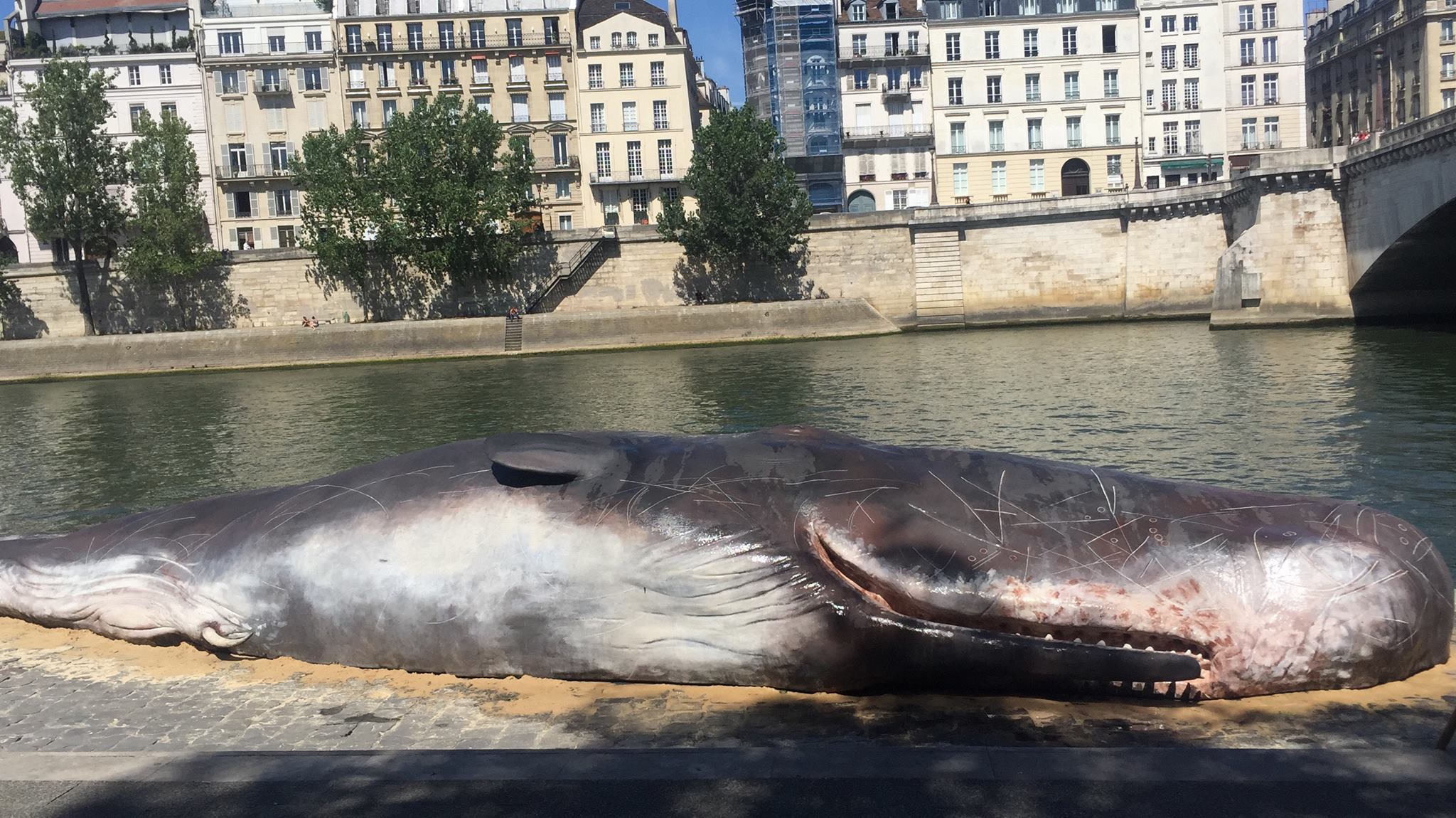 A lot of Parisians and tourists took pictures and video of the cetacean, not suspecting for a moment that it is ...
an artistic staging !!!

The whale is a plastic work of art realized by a Belgian collective: Captain Boomer. Founded in 2007, the group of environmental artists is not in its first hoax. In France, this group had already tried the experience in Rennes. And also throughout Europe: London, Scheveningen (the Netherlands), Valencia (Spain) and several Belgian cities.

"Our goal is to play with the boundaries between fiction and reality, to intrigue people, to make them astonish, to speak ... It's an artistic way of making people aware of the environment," says Bart Van Peel , Founder of Captain Boomer. These hyperrealist sculptures are like an immense metaphor for the dysfunction of our ecological system. People feel that their connection to nature is disrupted ".
The choice of Paris is no coincidence. "Paris is a symbolic city. We could not do it this year elsewhere: it is at the same time the heart of Europe, an important cultural center but also and above all the most invested capital on environmental and ecological issues.

The work of art will be visible for another three days on the Quai de la Tournelle (Notre-Dame)
before leaving again to run aground on the shores of another European city. In any case, these artists can be proud of their operation, it has worked well beyond their expectations.

Submit
$0.13
7 votes
10
Authors get paid when people like you upvote their post.If you enjoyed what you read here, create your account today and start earning FREE STEEM!
Sort Order:
[-]
datboithe1 (44)  ·  3 years ago

Sperm whales would never go anywhere near the Seine, so any experienced cetaecean expert would immediately realise that it was a hoax! But the everyday person isn't a cetaecean expert, so it had the intended effect! Although some smaller whales actually do regularly appear in rivers, like the beluga whale.

@datboithe1
HAHAHAH
Yes for sure :)
when i see it , i was like "WTF ??? what's this big fish on the shore ?? :)
I immediately remebered this hoax in Rennes
But effectively it had the intended effect ;)

Thanks @anthea ;)
Don,t foget to upvote if you liked , and following for the next adventure ;) Danggggg! This caught my attention and I was immediately thinking, there is no freekin way this happened!! I was shocked and kept reading and yup!! It was fake hahahaha! Good one! @geemo-from-paris

@awarenessraiser
hahahahaaha !!!!
Happy that it worked, I tried to keep up the suspense :p
Thanks for your attention ;)
U know the rules don't hesite to put an upvote , and mostly follow me , for see the next post ;)
I gonna take a closer look to your posts and the the same of course ;)
See ya girl ;)
Peace
@geemo-from-paris

@loooping
HAAHAHAHAHAH
If you had seen the reaction of the Parisian, it was very funny, some had trouble and did not understand that this poor beast goes back to Paris
@geemo-from-paris