The Making of the "Mr Crazy Bones..." Oil Painting

Here I'd like to share some insight into the process of another painting, "Mr Crazy Bones Encounters Ms. Alien Head." As with my work, "Dionysus", this piece formed through a very non-linear, organic process. The central figure, Mr Crazy Bones, had very quickly manifest as the main subject of the work early on in the creation. His relationship to the environment was yet to be determined, however. I knew there was an "alien" relationship, which at first manifest in the lower left corner of the work as a weird bug head like being, seen below. 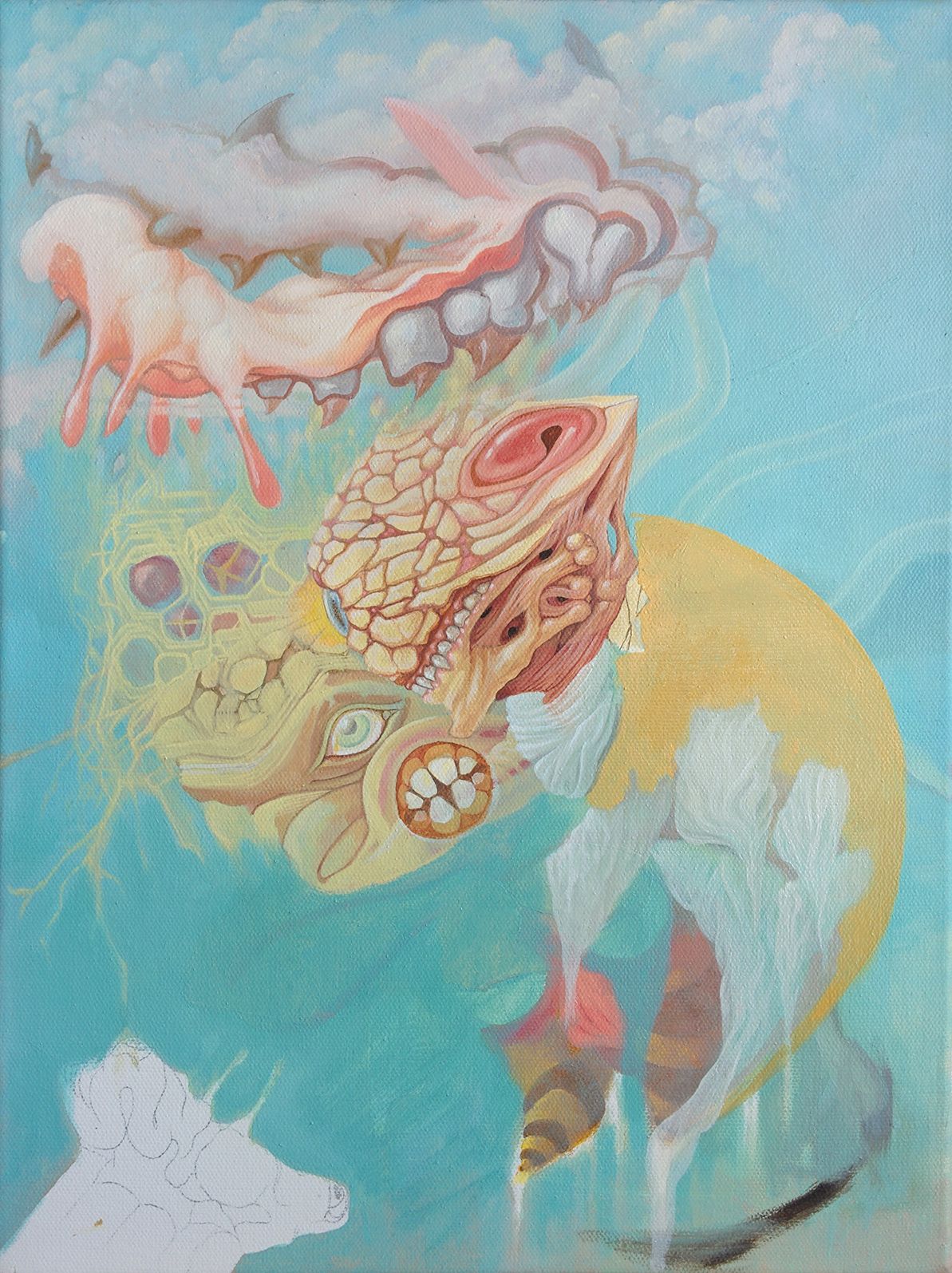 The awkward interjection of the bug head was too disruptive, so it was replaced in the next phase. This work from the start held a character that was somewhat serious, and yet cartoon-ish. The "Hermit" tarot card came to mind for a bit, coupled with a cartoon like sentiment, which lead to a phase where Mr. Crazy Bones held a Japanese lantern. He also at this point sprouted crab or insect like exoskeleton legs. To Mr. Crazy Bones' surprise, the lamp transformed into a couple sprouting alien heads, which sort of poofed to existence. The legs of Mr. Crazy Bones had also formed more complex, endo-skeleton features, and an antenna extended from the back of his skull. 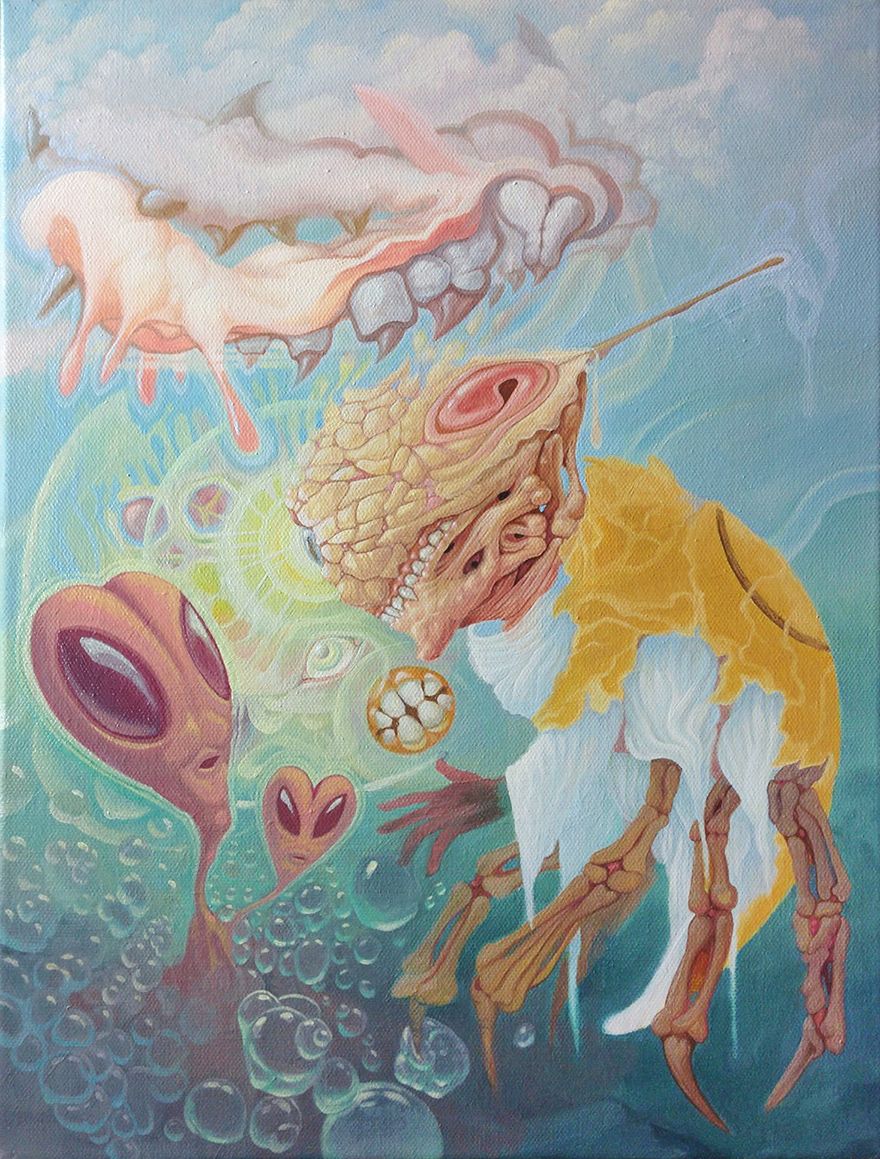 By this stage all the main players had arrived, and the refinement of their respective features began more in earnest. Mr. Crazy Bones' sleeves extended down to the ground surface, and tubes grew out in loops from his shell, which also started to take on layers, reminding me at the time of striated sandstone.

One thing I knew in this confrontation between Mr. Crazy Bones and the Alien Head, was that the former had a trick up his sleeve. His other hand had yet to be revealed. Then it became apparent, as the other hand manifest, holding a Poké Ball! With his left hand he was distracting the Alien Head, with the intention to catch it at just the right moment.

Dramatic lighting and cast shadows beneath the figure added more dimension and intensity to the scene. The Alien Head, as a ploy itself to distract Mr. Crazy Bones, grew a pink bow on its head.

As this drama unfolded between those two characters, the atmospheric organism, which had been around since the beginning, sprouted chakra eyes. 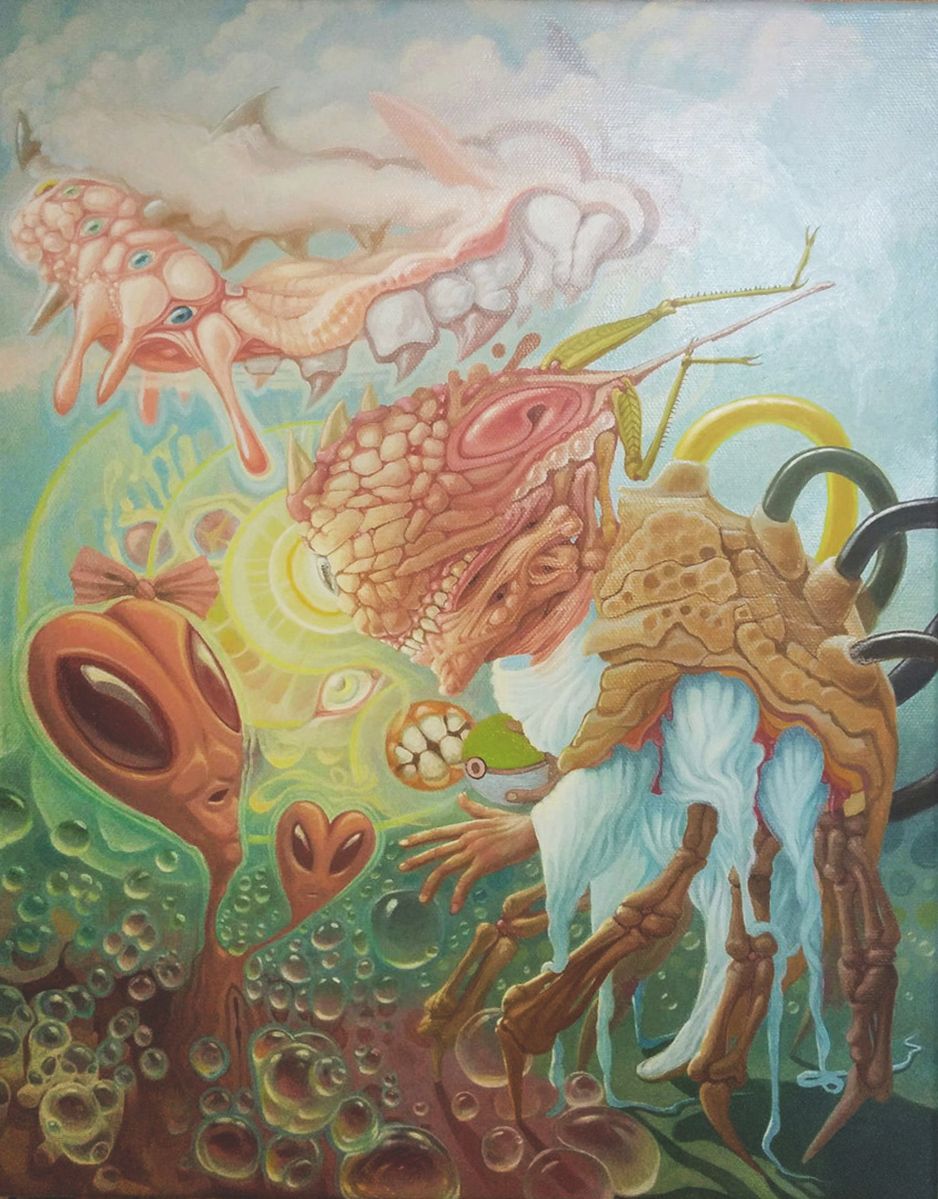 The whole stage had now been set, and the work proceeded by adding final features and details throughout the work.

The finished piece and synopsis below: In this small work, there are 4 identities; Mr. Crazy Bones on the right, Ms. Alien Head to the left, Atmospheric Chakra Monster up top, and in the mid background is Mr. Crazy Bone’s own ego.

Ms. Alien Head is startled that the shaman Mr. Crazy Bones has spotted her despite the typical glamour apparatus which usually subverts the attention of her abductees. Mr. Crazy Bones, having a long history with greys through disciplined dreaming practice, uses his powerful awareness to detect her form out of the cloud of orb and bubble like camouflage. The gender of Ms. Alien head, of course, is only a device, beckoning a memory in the shaman of his childhood playing Ms. Pacman in the arcade. This alien head is the type that behaves in the dream space much like a balloon–inflatable, buoyant, and in this case budding out a second baby alien head.

In a rare turn of events, Mr. Crazy Bones has managed to do the impossible, distracting Ms. Alien Head! In his right hand he has brought a Poke-Ball, which he will use to catch the sneaky bastard.

Part of the method employed by the shaman to trick the alien is by losing his human form almost entirely. He still retains hands and an essential skull like head, though it has begun to grow grasshopper legs in back, which, in a cricket like manner, are preparing to produce a sound by rubbing against a long mono-antenna. A large red object appears where the hind brain would be. The function or nature of the object is unclear; is it a tumor, a sinus, an organ? Much like the head, Mr Crazy Bone’s body has begun to differentiate. Though he still has human hands, he now sports a multitude of arthropod inspired legs, a shell on his back encrusted with various hard and gem like textures, and multi hued rubber tubes cycling in and out of his body, serving as a liquid coolant based upon the technology of PC Gaming Rigs.

Meanwhile, Atmospheric Chakra Monster is engaging with the deeply unconscious layer space of the entire scene. Its projections include soft, fleshy iterations as well as hard shark tooth /claw iterations. One of the hard projections pierces its own body, indicating a self intersecting, recursive nature.

Mr. Crazy Bones, though focused on Ms. Alien Head, is beginning to reciprocate some of the harder toothy forms of Atmospheric Chakra Monster. The shaman’s head instinctively begins to disassemble into finer filaments as a means to perceive the unconscious entity.

In the background, a faint ego of the Shaman focuses in parallel on the alien.

The pivotal question in this moment:

Will Mr. Crazy Bones succeed in turning the alien into the abductee?

hilarious. i'm working on a collage piece right now and was actually thinking of documenting that whole process as well...not that i've got any level of artistic skill to even compete with this. phenomenal!

@bucho Thank you, haha, yes this piece was quite a wacky process, much more so than a lot of my works. I'm happy to share, and glad you could enjoy the content. Best to you with your own process! :)

this is wild, and quite a trip! I love that direction you are going in - you develop it in a similar fashion as I do. The artist is the medium to reveal another dimension. Each element suggests the next, as if unlocking doors to go deeper.

@thermoplastic Otto, yes, I've very often felt an overlap in some of our methods. The experience of making a work is usually also transformative for me, many times there are paintings on top of paintings which tell a protagonist narrative. You are exactly right, we follow a path of revelatory structures of the psyche which lead us to be able to reveal artifacts of the unconscious, and bring them back in some physical sense. For me that is really the core intrinsic value of art making, and an aspect that I expect to have in a work to deem it genuinely complete.

can I quote you on that? Man, Cody, you should write my intro!

What a great story your work tells, a fun narrative.

@opheliafu So glad you could visit this narrative and have fun doing so. Thanks!

Wow, in your case I think that the process and the recounting of it are part of the art! The final painting seems so different now that we know the thoughts of its protagonists and the previous stages of their existence. Maybe it should be a video-clip, with appendages sprouting and Mr Crazy Bone's form diluting to abstract shapes. Maybe we can have also a glimpse at the other Poke-greys of his collection? Did he catch them all?!

This painting and the previous ones are like depicting an acid-trip, LSD-induced visions. Somehow, the shamanic references and the alter-egos, remind me of Castaneda's mushroom experiences. Thanks for describing the whole process in such detail.

@nyarlathotep You are right. For me often the challenge lies in trying to convey the process, as very often it is psychedelic and quite abstract in a given moment, though that moment might be absolutely quintessential to the evolution of the work as a manifestation. Still, documenting, and describing the visual narrative helps to elucidate some of that. Haha yes, Mr. Crazy Bones most definitely would have a collection of greys that he's caught with a variety of methods, I'm sure. Castaneda is exactly relevant to Mr. Crazy Bones, as a shaman, losing his human form as a method of doing work relating to these grey entities. Good call!

Thanks for taking the time and giving your attention to this little novella, by the way. I'm glad you could enjoy the insight and appreciate the work.