My Tengu Character for Dungeons & Dragons

I'm playing "Hells Rebels" - a Pathfinder RPG and I decided to be a Tengu. For those of you who don't know what a Tengu is - they're a race of non-flying bird people.

I enjoy drawing my characters to show the other players so that they have a better idea of what I look like. For those of you asking: "What the hell's a Tengu?" Answer: It's a humanoid crow.

And drawing a bird person is hard. I've never done it before. My first attempts were to look at cartoons of crows. It ended up looking too much like the crow in "Secrets of Nimh."... Or maybe a muppet. 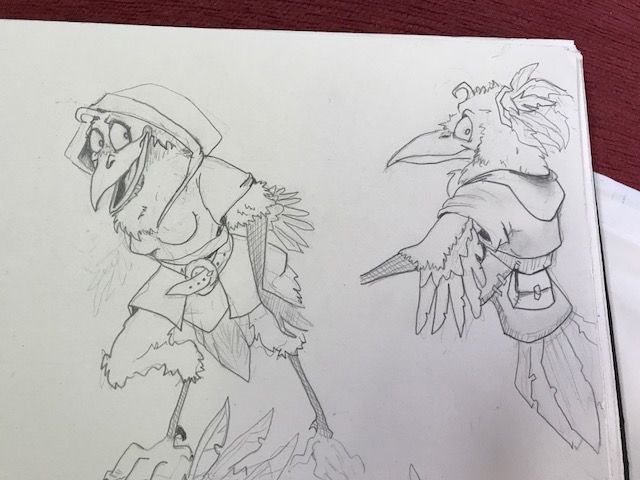 So I scrapped the idea and started looking at real crows and playing around. But a bunch of the sketches still turned out looking like a different species of bird. I realized the reason for this was because I was trying to make it look like a female with distinguishable female traits: feather hair, breast, tight-fitting clothes to show off curves. I couldn't do any of this because a crow was not distinctive. It was sleek and black and had small feathers on top of its head so any extra bird features I tried putting in made her look like a robin, or a parrot- or anything else but a Crow.

I looked up Pathfinder Tengu's online and most of the artists took care of this problem by putting them all in hooded baggy clothes, and they all looked like men to me. I didn't want that. I eventually got to the character on the bottom right corner but I still wasn't 100% happy. My DM @decimus knew about my problem and drew me this incredible Tengu. 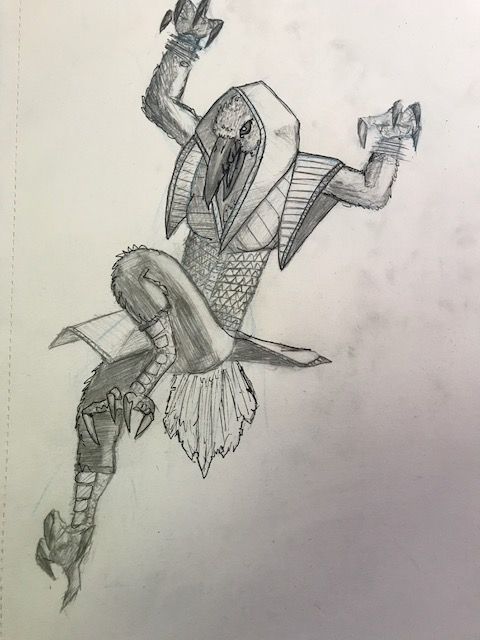 I actually really love it- hood and all. The outfit is cool, she still has a female definition, she still looks like a crow species and it's reminiscent of an assassin's creed character- which is what my Tengu kind of is. She's really good at good running on rooftops and acrobatics and brings swift death from above. Her beak is a little busted in this picture because she got too close to a fight in-game and a thug crunched her beak with a mace. Almost killed her. My poor, weak, little first level character. :(

So few hit points, so many enemies.