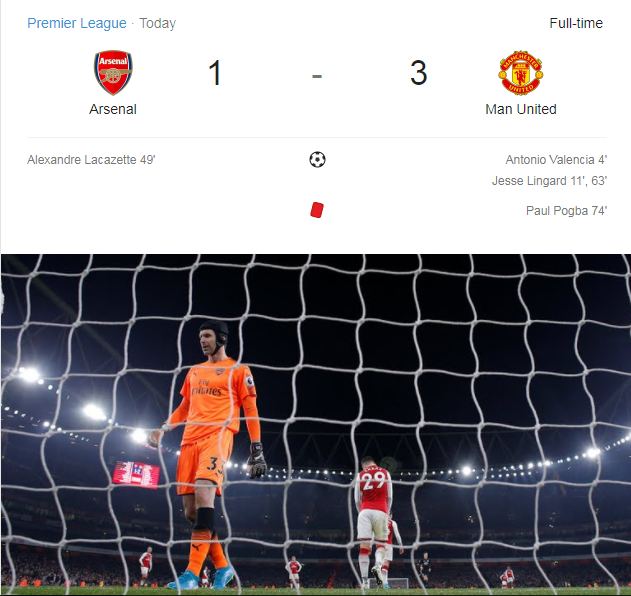 What a way to start the morning as an Arsenal fan knowing that your team should have won given the fact that Arsenal constantly attacking the Manchester United but sometimes in football, LUCK can be a major factor. Lets delve in to my thought of the match just now:

Peter Cech (5). Only made one significant but did little to prevent other goals against Arsenal.

Laurent Koscielny (4). Defensive mistake on the first goals .He needs rest as he has not fully recovered.

Nacho Monreal (6). Good performance and kept his foot on the ground

Hector Bellerin (5). Average performance. I wondering is he losing his Mojo?

Aaron Ramsey (7). Contributed an assist for the only goals scored by Arsenal.

Granit Xhaka (6). He was playing very good but went missing on the third goals, I think he need to improve on his concentration.

Alexis Sanchez (5). I believe he was little bit quite. Losing balls and fail to put the ball at the back of the net.

Mesut Özil (8). What a great performance by Ozil. Critics tend to point out that he will not performed in big matches but that is not true earlier. Too bad the defensive blunders overshadowed his contribution.

Alexandre Lacazette (7). Excellent hold up play and scored one goal for Arsenal.

I would have been in a bad mood afterward if I watched the game. Having won back to back previously was not a guarantee to win against United. But hey, being a #gooners has taught me a lot about having high expectation lol.

Handling disappointment is one of gooners unique trait. And not to mention, luck is rarely on our side.