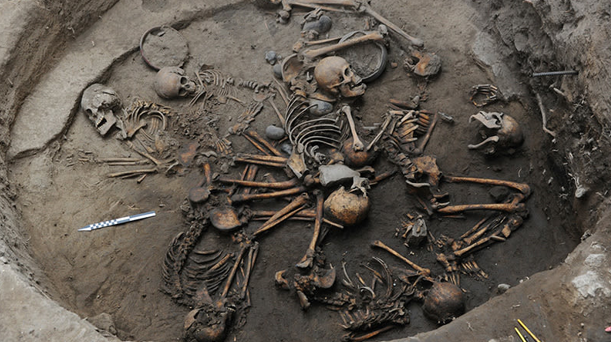 Ten ancient skeletons have been unearthed in Mexico this week including a baby of around one-month-old! Ritualistically deformed, in that their skull shapes and teeth had been altered, they were arranged in a spiral shape with interlocking arms - confirming that they were buried in some sort of ancient death ritual. Estimated to be over 2,400-years old, this occult discovery is creating a typhoon of ideas in the archeological world.

According to a BBC report, archaeologists from the National Institute of Anthropology and History (INAH), who are excavating the grounds of the Pontifical University of Mexico (UPM) in the borough of Tlalpan in southern Mexico City, discovered the skeletons under a building that once served as “classrooms, chapel as well as dorm room for the priests.” Bone dating revealed the people once belonged to the Pre-Classical period in Mexico around 1600 BC, predating the rise of the Aztec Empire. The bodies had been “buried with cajetes and tecomates - earthenware bowls and pots of various sizes” and some of them grasped “stones or ceramic spheres,” according to the BBC.

Scientists Examiner revealed this week that archeologists at (INAH) believe this skeleton ritual might have been performed by “the hunters and gatherers that existed in the villages during the ancient time.” Furthermore, a researcher from the Pontifical University of Mexico, Jimena Rivera Escamilla, told Scientists Examiner that “the head part of one of the bodies is lying upon the chest part of another body, or the hands from one body have been placed upon the back of another and so on.” Escamilla interpreted this as “the circle of life that starts from a baby growing into a child followed by being an adult and ultimately the death of that particular individual again to start with the baby phase.” 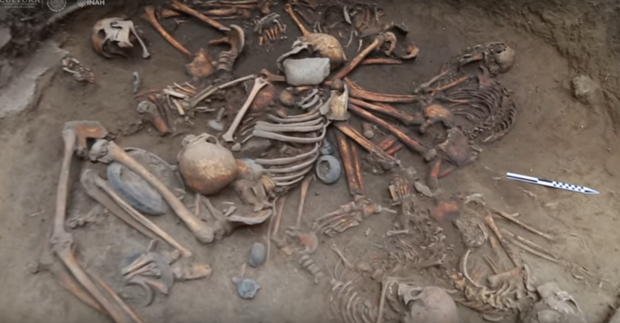 (The bodies were arranged in a spiral with interlocking arms. (INAH/ Youtube Screenshot))

As early as 1400 BC this part of the Valley of Mexico was populated and according to Mexico News Daily “this discovery is significant because It’s the first time archaeologists have found a grave containing such a large number of people, in this area.” The archaeologist who heads the INAH team said in a prepared statement “the discovery and ongoing excavation of the site could be of equal importance to the study of the pre-classical period in the Valley of Mexico as digs that were completed between 1960 and 1990 at sites including Tlatilco and Temamatla.” Adding to the unfolding mystery, researcher Escamilla said that her team has “found more than 20 graves at the UPM site, of which six contained the remains of a single person” and she explained that the graves were dug as perfect circles, with diameters of up to 2.3 meters” according to Mexico News Daily. So what are we to make of all these ancient spirals and circles?

Spiral designs can be found across the ancient world and in South America they are among the Nazca Lines in the coastal desert of Peru, dating from 200 BC to 500 AD. Prehistoric spiral petroglyphs in Colombia have been discovered at altitudes of 3,200 meters above sea level and in 2006 the International Council on Monuments & Sites published Rock Art Of Latin America & The Caribbean which stated that “more than 1,400 petroglyphs (rock engravings) in Las Plazuelas, Guanajuato Mexico, dating 750-1200 AD, predominantly depict spirals.”

This is where archeologists take a step back! They know that any, and all efforts to interpret what a spiral grave of skeletons actually meant to the people who created it, are futile meanderings in one’s creative imagination! Many experts are convinced spirals represented water in Ancient Mexico, while others believe they are the circumpolar stars wheeling around the pole star. Others will tell you they generate, or contain, powerful Earth energies where a dryer expert might see them as simple references to swirling winds that affected hunting and fishing efforts.

What the spiral grave burial meant to its designers, we might never know. But what we can take from this incredibly thought provoking discovery, is, reaffirmation that our forebears had developed not only a set of rich cosmological beliefs, but that they had managed to simplify them and express them in the most simple, mystical and natural of all symbols - the spiral.