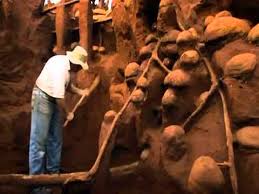 The archaeologists managed to find a giant ant nest that is so large that it deserves to be called a megapolitan or ant royal palace. Archaeologists found the nest in the Brazilian territory.

Scientists believe that the megapolitan became the largest ant colony in the world ever lived. But until now, it is not yet known why the city was abandoned by ant colon that made it.

Before excavation of nests, scientists first cast castings to fill the cavities into the ants. It took 10 days to cast cast-cast in an area of ​​500 square feet and widened to 26 feet underground. After a month, a team of scientists headed by Luis Forgi began digging. The prints show that this ant's nest is so majestic as the Great Wall of China. Scientists found that this ant nest has a complete channel that serves as a ventilation as well as transportation routes. There is a big road like a highway or a small road like a rat road. From the main streets of the city of ants, there are branches that lead to garbage and mushroom gardens, which ants continue to use as food sources.

The ant colony is led by a queen. Based on research, queen ants can collect as many as 300 million sperm from a male before building a colony. The eggs produced by the queen will become the embryo of ant colonies. The more eggs produced and survived, the greater the ant colony will be.

Ant colonies will have various tasks, ranging from collecting leaves, growing mushrooms with foliage media to dispose of garbage and remove harmful parasites. Meanwhile, there are large-bodied ants serving as armed forces defending the territory. Sometimes, they are also deployed to build tunnels aka burrows.

The results of ant colony culture is somewhat remarkable. Ant sociobiology is one of the most interesting to learn. Perhaps, by studying it, humans can also learn from ants.

What an amazing place! It really is a palace.