“He Beat The Dog To Death While I Was On The Phone With 911!” – Another Southwest Virginia Horror Story I've done the math, but the situation I'm about to describe does not add up for me. A credible eyewitness, a 911 recording, and neighbors who corroborate the details -- yet a dog is dead from traumatic head injury, no one is charged with felony cruelty, and the witness is being given updates from law enforcement that don't match up with what she saw.

Here is a public statement made by the eyewitness: 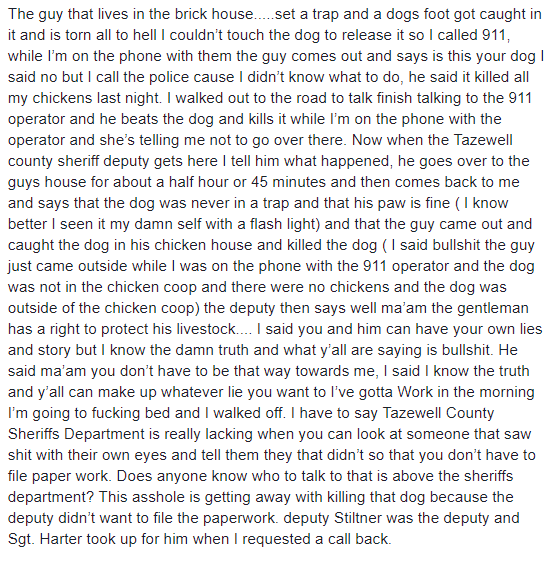 In Virginia, it's legal to kill an animal that is in the act of harming livestock or poultry. What is not legal to do is inflict suffering or torture. This is how the law reads:

3.2-6570
Subsection F. Any person who: (i) tortures, willfully inflicts inhumane injury or pain... (ii) as a direct result causes the death of such dog or cat that is a companion animal, or the euthanasia of such animal on the recommendation of a licensed veterinarian upon determination that such euthanasia was necessary due to the condition of the animal, is guilty of a Class 6 felony.

Here's what the man's neighbor had to say about the chickens:

So why was the dog beaten on the head until it died?

Last night, a deputy who is not a trained animal control officer responded to the 911 call made by the eyewitness. He left the dog's body with the man who killed it and apparently made no attempt to determine if the dog had an owner. Today, the Sheriff's Department investigated again and this time took the dog's body to the veterinarian who works extensively with Animal Control. The following is what the eyewitness says she was told by a representative from the Sheriff's Office:

So they told my daughter that they retrieved the dog and took it to the vet and there was no injuries to the legs but that the dog got caught in chicken wire but he suffered from a single blow to the head. They told me that they took it to the vet and there were absolutely no injuries to the dog except he died from head trauma. Last night they told me the guy came outside and the dog was in the coop killing the chicken so the guy killed the dog. Today the story is that the dog attacked the man and was in the chicken coop killing the chicken......

So which is it? The dog was killing invisible chickens, or the dog was attacking the man? Why did the story change? Tonight, the eyewitness also received information that the man was "receiving treatment" for injuries sustained during the incident. I would be quite interested to know if he sought treatment last night, or today after he learned that arbitrarily beating a dog to death is a Class 6 FELONY in Virginia.

Actually, there are quite a few things I'd like to know. Such as, why the eyewitness statement about the dog being caught in a trap is being summarily dismissed, especially since it seems another witness came forward who actually saw the man setting the trap the previous day.

I have a wish list of documentation that I would like to see and hear for myself. I would very much like to hear the 911 recording that was made while the man was beating the dog to death. I'd also like to review footage from the bodycam of the responding officer. I'd certainly like to examine the veterinary records from the dog's postmortem, in particular the photos taken of the dog's paws. I'd like to know the location of any injuries the man may have incurred during the incident, if they are on his hands as they might be if the dog was trying to defend itself, or on the man's legs or torso, as would be likely in an aggressive attack.

Do I think I will ever get to review any of this evidence? Newp. But I certainly hope that a neutral third party outside of Tazewell County gets the chance. There isn't a doubt in my mind that someone involved here isn't being truthful. After all, it's just a dog, right? Never mind the statistical findings that animal abusers are five times as likely to commit violence against humans.

If never spayed or neutered, a female dog, her mate, and their puppies could produce over 66,000 dogs in 6 years!

I'm pretty sure dogfact is a bot, but I'm giving this automated comment a 100% upvote because it is extremely relevant and useful information. This statistic sounds outrageous, but it is accepted as fact by most experts in the U.S. Numbers don't lie.

Ugh. So there were no actual chickens? So, there's the answer as to why the guy changed his story. If he was attacked in some way, where are the injuries? Sadly, I'm afraid people who were raised not to care about the well-being of animals cannot be rehabilitated. Regardless of what happens, he will never change his attitude.

Never mind the statistical findings that animal abusers are five times as likely to commit violence against humans.

It is a sad reflection on human nature that animals are abused in this way, and nobody is held accountable for it. Good luck in your investigation, I hope you are able to make someone accountable for this, and stop it happening again.

Thank you so much. I agree--it's a horrific reflection on human nature and right or wrong, I've judged an entire region (Appalachia) on the way they treat their animals here. I think it speaks volumes.

When I was a kid, we had trouble with dog packs hassling the sheep. A few were killed--the sheep--and had to get neighbor out to help with the dog attack once and one was shot. Damn we felt bad for that but the dogs were running wild and we'd tried everything else first.

Beating it to death it just plain evil. And I'd tend to believe the eye witness. You don't dream up a trap on the dog's leg easily, especially when going against the powers-that-be in your area.

I hope someone somewhere investigates properly. Was the trap even adjacent to the coop filled with chickens? Because that's the only way that action could make sense--that you set traps immediately outside the chicken coop to try to trap what was killing them, especially if you didn't know if it was coon or fox. But just because a dog is in the trap doesn't mean it did the killing either. It might have been following the trail of the actual killer.

But it sounds like you also have witnesses saying THERE WERE NO CHICKENS. So how do you kill an animal killing your animals when you don't have any?

Anyone have a good telephoto lens and can get pictures of his coop without chickens?

Also, spread the word in your local area to take pictures before calling 911 if discovering animal abuse. Take photos and upload to cloud then call 911. It sucks for the animal to wait a moment longer, but then at least you have timestamped proof of actual abuse.

What an ignorant awful SOB to do such a thing to an animal, when keeping livestock you always have risks but like you say somethings are just not adding up, I wonder if he has ever done something like this before, or is he new to the area, I never see dog traps here but what we do get in this country is gypsies throwing over food full of antifreeze to dogs and poisoning them. Fortunately it does not happen in this village but im always weary incase and never keep the dogs in the garden while im away from the house, please keep us informed of what the outcome was and maybe your friend might think about a camera maybe it's good for security and also for shit like this. @rhondak my heart breaks.

Wow. This makes me so sad. We have chickens and dogs. In almost all cases they do not mix well. That is why they each have their own space.
I can't imagine hurting a dog, much less killing it for any reason. So, so sad...