There are three different puffin species the Atlantic, Horned and Tufted. Roughly 10% of all Atlantic Puffins can be found on the British Isles, the remaining 90% are present in coastal areas of North-Western Europe, Island chains within the Arctic Circle and North-eastern parts of Canada and the United States. 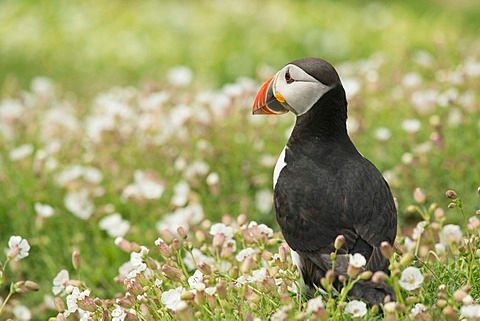 Source
They only return to land for the breeding season, due to the large expanse of the Northern Atlantic and their solitary lifestyle it is very difficult to attain whether Atlantic Puffins are monogamous like many other Seabirds or whether they’re just opportunistic in their search for a partner.

Puffins are best known for their iconic brightly coloured bill, they shed their bills annually, during the winter months their bill is a duller greyish red, it is also smaller in size than the previous bill, the brightly coloured plates will not return until the Puffin has aged another 2-3 months, this normally occurs during the breeding season.

Puffins are not efficient Birds when it comes to flying, 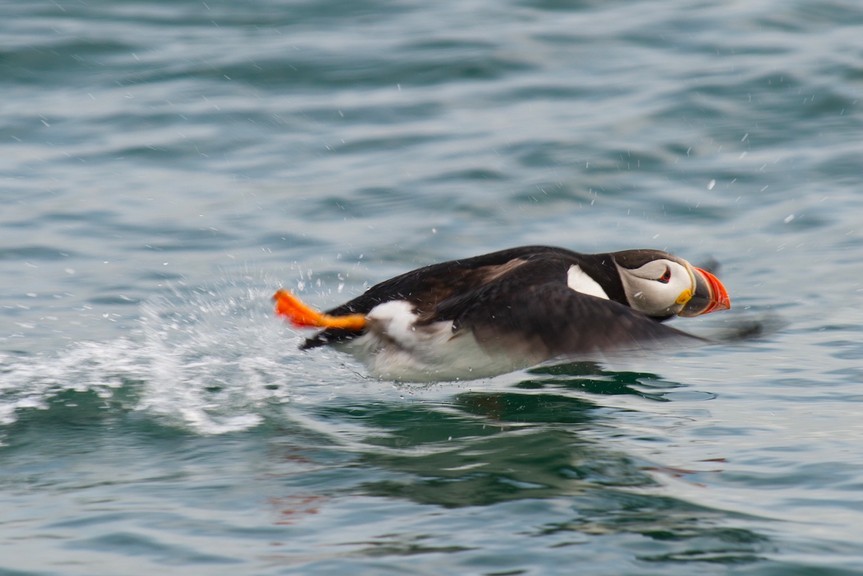 Source
they can however reach speeds of up to 55MPH by rapidly beating their wings at over 400 beats per minute at low altitude, Puffins are much more at home forever riding on the Oceans waves, this is where they spend most of their time which is adequate as 100% of their diet is made up of Fish and Marine Invertebrates, luckily their underwater “flying” ability is much more efficient, they are able to swim at speeds of up to 40MPH and dive to depths of over 200 feet. Source: Here
The UK resident Atlantic Puffins rely almost entirely on Sand Eels to feed their chicks during the breeding season. This may have something to do with the Puffins skills as a fisherman, the Atlantic Puffin can hold as many as 10 Sand Eels in its bill at a time, they achieve this feat by pushing the fish into their top palette which is lined with small spines thus allowing them to hold multiple fish whilst foraging for more, this method of gathering eliminates the need for the Puffin to regurgitate for their offspring.

Puffin chicks are referred to as Pufflings, they generally fledge between 45 and 60 days, when they’re ready to fledge they take to the vast Ocean without their parents, they won’t return to land for another 2-3 years when they are ready to breed, like most Seabirds, they return to their location of birth. 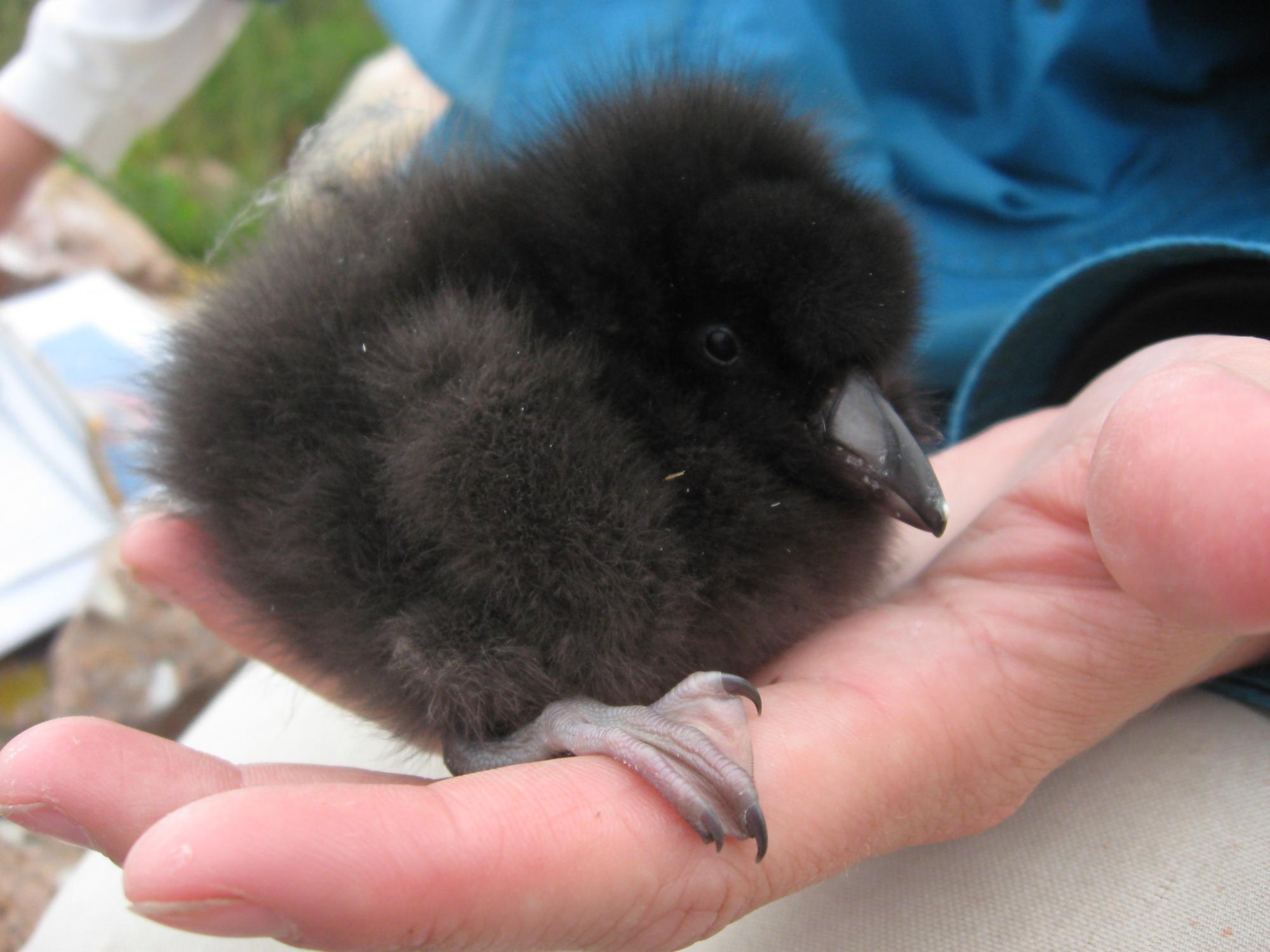 Puffins in the UK Source: Here
In the UK, the RSPB observed that throughout the British Isles there were approximately 580,977 breeding pairs as of 2016, in any group of animals this is considered a stable breeding population, though their numbers have been declining steadily over the previous few decades with some researchers predicting that European Puffin populations may fall by as much as 50-79% over the next 40 years, another detrimental factor is that over 50% of the UK’s breeding Puffins belong to just 2-3 locations making them vulnerable to isolated location issues, as such they are considered a Red list species.

Like most animal species in decline, their leading threats are man-made with oil spills and overfishing their two most imminent problems,the threats are mainly detrimental to the breeding season as the growing Pufflings require a large amount of food, up to 30-40 small fish per day to survive and thrive, 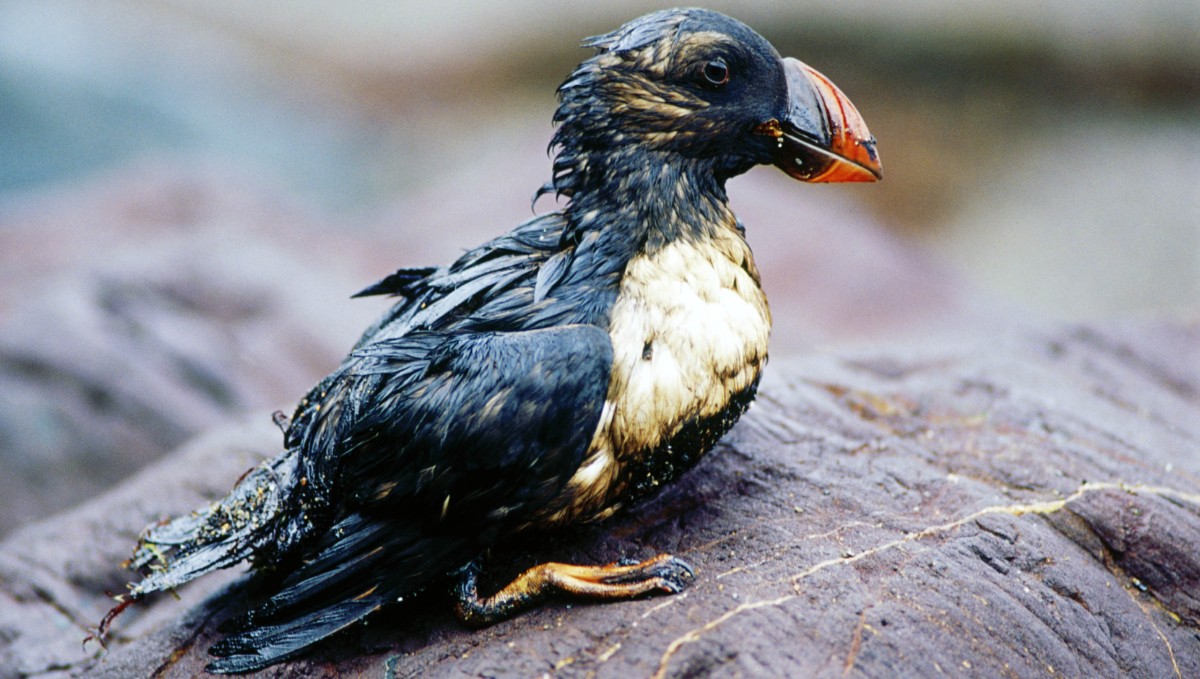 Source: Wordpress
it has been directly observed that in years where the yield of Sand Eels and Herring have been low the number of Pufflings reaching adulthood has also decreased with many dying in their burrows due to starvation. Adult Puffins are less affected by human activity, despite needing to eat between 40 and 50 small fish (<7cm) per day, they have a much wider array of food with less competition when out on the open Ocean. The Puffins biggest struggle is making it to Fledgling age, an increasingly difficult task that is seeing populations begin to dwindle.

As the largest threats to the Atlantic Puffin have been observed to be dietary related organisations such as the Royal Society for the Protection of Birds (RSPB) and the Zoological Society of London (ZSL) have asked members of the public to take pictures of Puffins during the breeding season to gain a more complex and deep understanding into the dietary habits of the Puffin to assess exactly what the Puffins are relying on to keep their chicks fed, in doing so future framework can be established to prevent the overfishing of the Fish that Puffins rely on to raise their young, so get snapping those photos! Puffins can be found along all the Coastal regions highlighted and are Best looked for at a breeding colony, specifically the Farne Islands and Coquet Island (Northumberland); the Isle of May (off the Fife coast); and the Shetland and Orkney Islands.

You can also Donate to the RSPB directly, over 90% of their net income goes towards conservation, they are a more than worthwhile organisation to support in the UK. 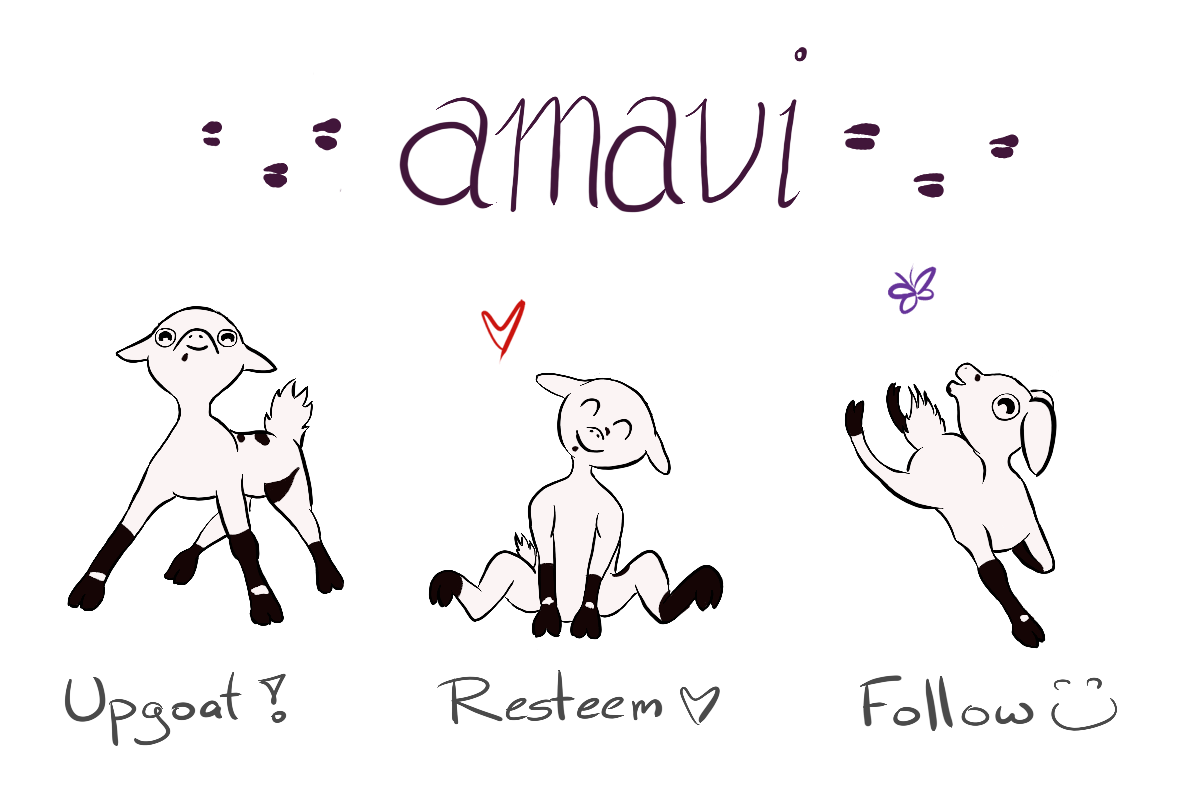 Wow, I've always liked Puffins, but had no idea they shed their bills. Amazing!

Thank you for highlighting another worthy species. :)

Puffins are super cute. They were one of the reasons to visit Iceland :))

Oh its lovely to hear it when people see the animals I write about in the wild! I hope they are just as amazing in the flesh as they are on photo :) They are, look exactly the same :)

I like all of your posts very beautiful. Thank you so much!!

Thank you, I am glad people enjoy my work :)

@reported has voted on behalf of @minnowpond.
If you would like to recieve upvotes from minnowponds team on all your posts, simply FOLLOW @minnowpond.

That is a beautiful bird!

Congratulations @amavi! You have completed some achievement on Steemit and have been rewarded with new badge(s) :

Congratulations @amavi, this post is the fifth most rewarded post (based on pending payouts) in the last 12 hours written by a User account holder (accounts that hold between 0.1 and 1.0 Mega Vests). The total number of posts by User account holders during this period was 2813 and the total pending payments to posts in this category was $1871.61. To see the full list of highest paid posts across all accounts categories, click here.