Todays highlights of a Zookeeper and What's so good about Reindeer anyway?

Today started just like yesterday only this time we didn't lose any animals over night which was a wonderful feeling after yesterday. As part of my morning I spent time organising some enrichment for my birds, as they are one of the worlds most destructive birds we try and keep our group of 49 busy. A couple of days ago I bought the birds a large watermelon so I decided to use the remaining pieces and make them a smoothie and it went down a treat but they didn't drink it all so we shared it with the pigs and they LOVED it. 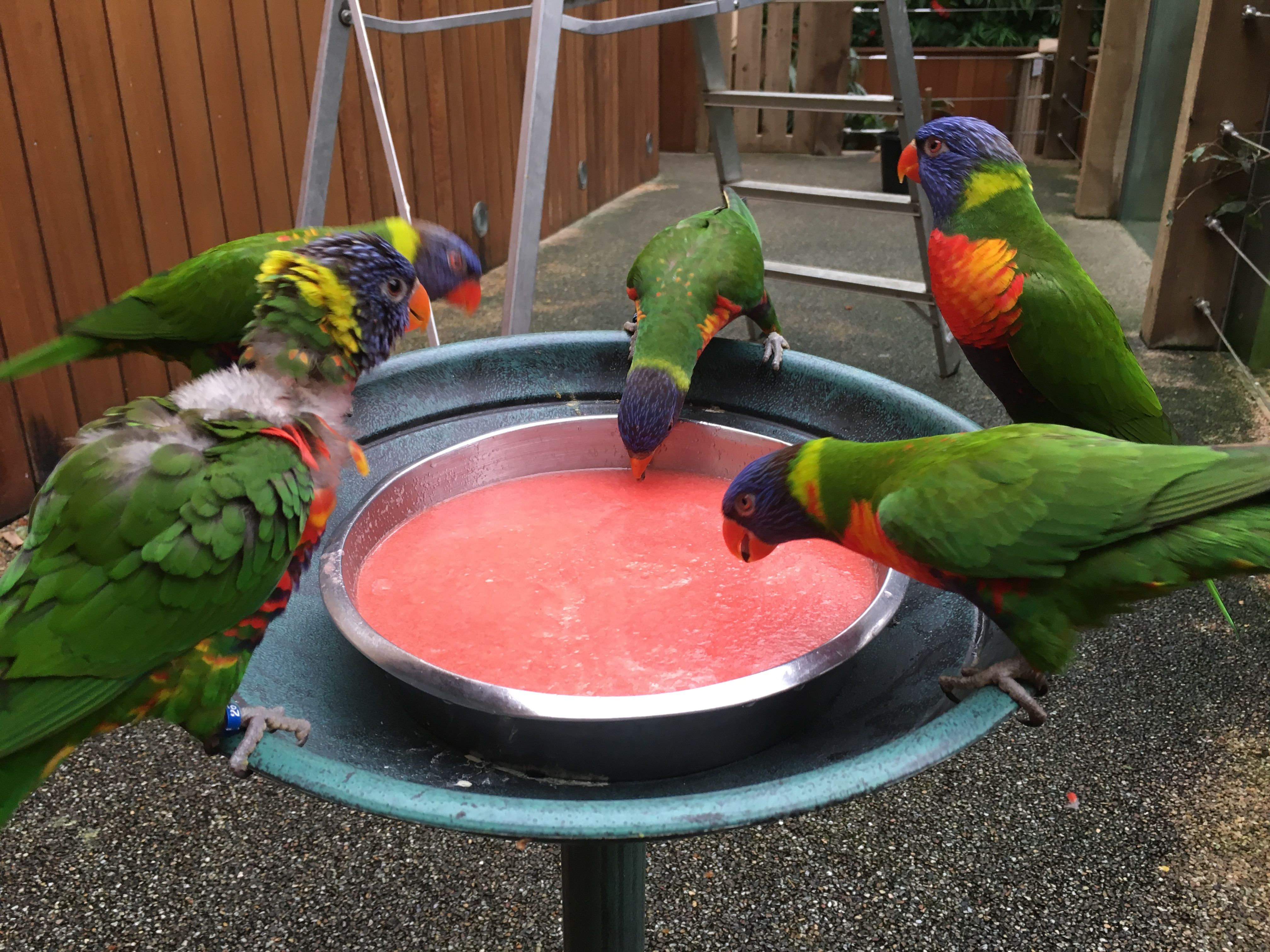 As it was a weekend there wasn't much other than selling animal food that we were required to do. I briefly bumped into Basil and gave him the biggest scratches and also gave him some of his favourite treats (a bit of goat food and some carrot batons) he wasn't best pleased we were not going to train and stood behind me for most part of my afternoon shouting at me. Basil is a diva, a complete diva. If he wants to train he will find a way to persuade me or just be the first out of the goat gate as quick as lightning so he can get to the training spot and then ignore everyone but me to get him back in- hes a nightmare at times but I do love him. I did the last weigh in of our two small Mediterranean Spur-Thigh tortoises who we have been preparing over the past 6 weeks for hibernation which means they haven't eaten now for 6 weeks! I can't imagine not eating for 6 minutes... let alone 6 weeks. We have been required to daily bath the boys to see if they are drinking, or going to the toilet - reptiles will go to the toilet in the bath - and today was their final bath and they are currently now nestled into the fridge at a constant steady temperature to sleep for another 12 weeks providing they do not lose weight or move too much during their sleep. It is incredible that these animals can survive like this! Why do we need to make sure they poo? If they go into hibernation with faeces in their system this will eventually kill them as their whole body system will of almost shut down completely to survive. 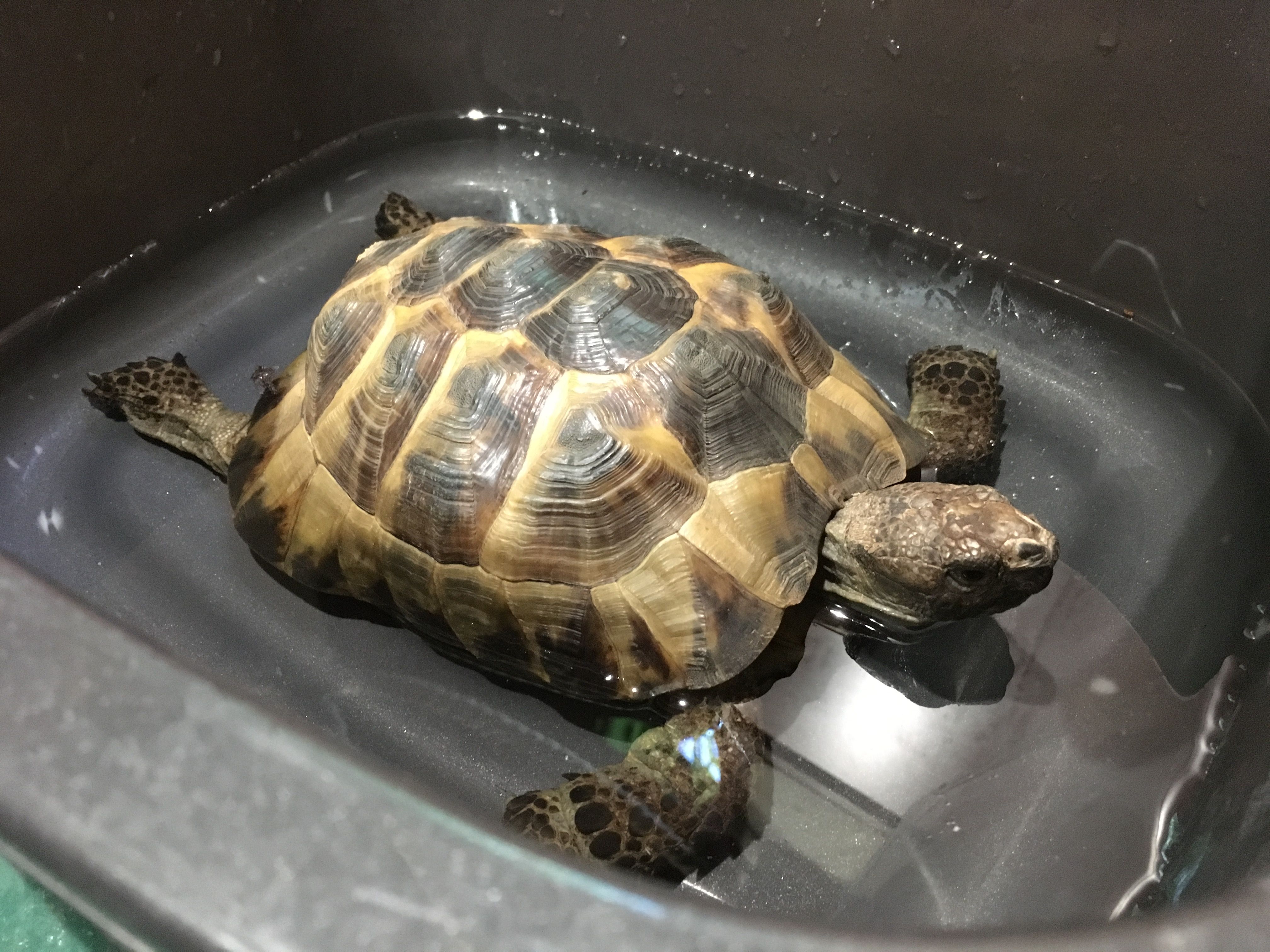 Not much else to report on the day today, as I am still on the same section I won't do another big post about my day until I have moved to a different part or something big happens.

As promised here is my daily species and profile!

Scientific Name: Rangifer tarandus
Common Name: Reindeer / Caribou
ID: Ronnie (Geronimo)
Age: 5 years 5 months
Birth Location and details: Captive born, UK Zoo collection
Current Weight: 141.5kg
Pecking Order: Used to be the most dominant, now appears to be 2nd ranking
Diet: 3 scoops of reindeer pellet AM and PM, large chunks of glucose AM and PM and carrots and apples PM only sliced into batons not chunks (they do not have top teeth to enable them to chew chunks)
Behaviour: Ronnie is a very inquisitive naughty reindeer who likes to pull your bin bags of rubbish you have collected from his field back onto the floor to make more mess. Reindeer do not like their hay and straw shaken up and will not eat it unless it is given to them whole in their slices. Ronnie is always the first reindeer over to say hello and forgets how big his antlers are and before you know it you have more antler than reindeer in your face when cleaning. Are they dangerous?: Yes, very much so. The reindeers themselves are not very big however, their antlers are massive and also very heavy. They are made of bone and they drop and regrow annually, each yeah the boys will grow a new point on their set of antlers and they also grow back bigger every year. The bigger the better, it means in the wild should they win a fight against another deer they will be able to breed with a large number of females. When working with the deer its important keepers are aware where the deer are at all times and also are equipped with a radio in-case something goes wrong, keepers will agree on their exit route and will also get themselves to safety. Working with reindeer its not like working with large animals such as horses, they do not respond in the same way as a horse does, if you push back on a reindeer it will push harder and thats when you get into trouble, it is always best to get yourself away safely and calmly without taking your eyes off them - this is why we work in twos!

Conservation Status: Fortunately for the Reindeer their status is Least Concern which means their numbers are stable! It does not mean they are not at risk or not important, for thousands of years reindeer have been providing meat, fat, skins for clothing, bedding and tents and antlers for tools for many cultures. Sweden Russia and Finland depend highly on the animals for their income and in Canada they are an important food source for the far northern communities. 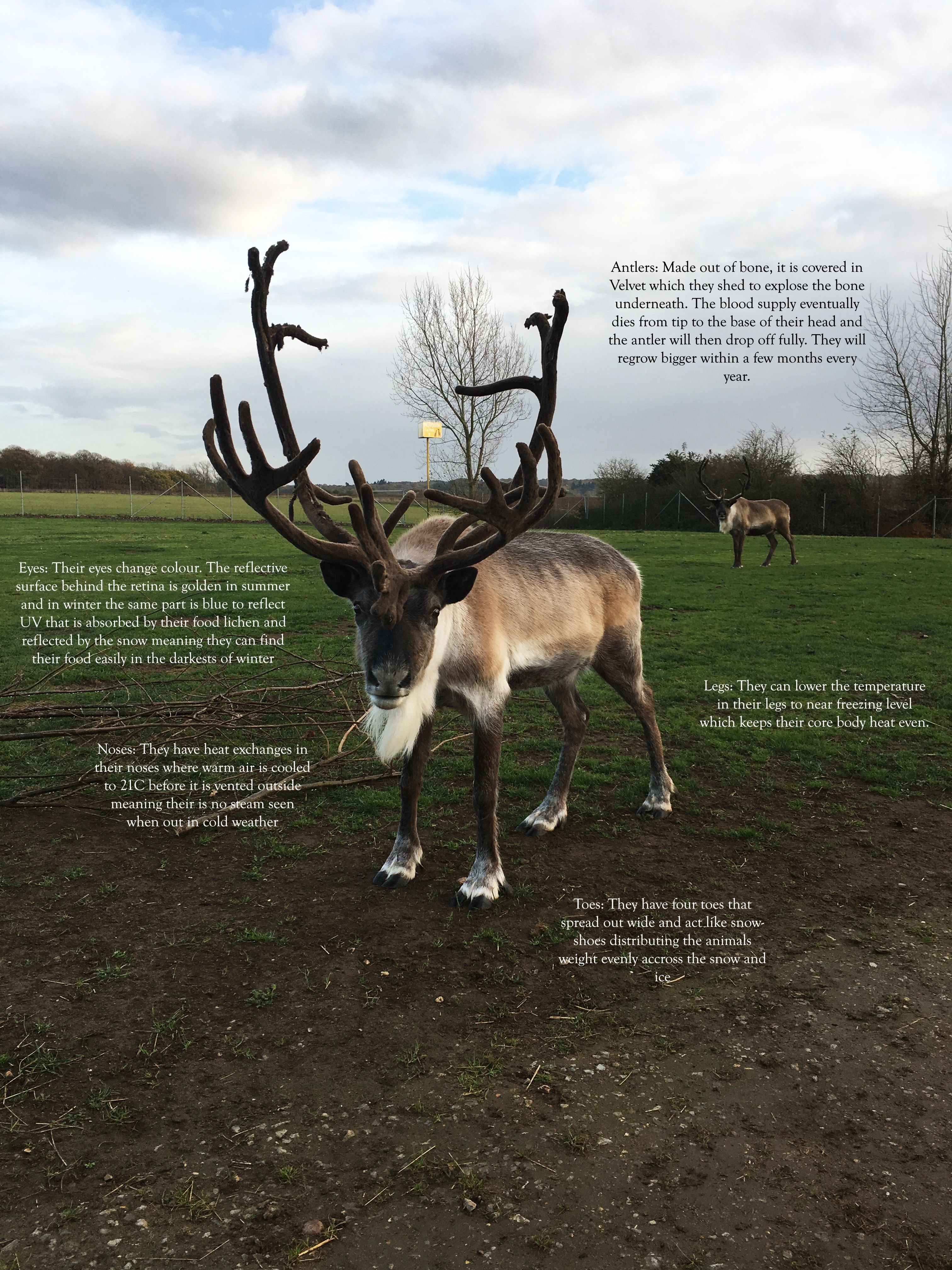 Santa picked one of the most magical creatures to pull his sleigh and I hope you can agree. Any questions please feel free to ask!

**Thank you for all your support!!

beautiful animals, excellent post, I invite you to visit my blog, regards

I had no idea their antlers fell off and regrew every year - how can they regrow back that quickly? That's crazy!

Amazing eh? I am lucky to have one of ronnies from last year and it’s SO heavy and about half the size of me and I’m 5ft’3! It’s the speed upon which they grow, the bloody supply to the angler itself is phenomenal, last years one of the herd members caught his in the fence in a freak accident and broke a bit off. That part of his antler then bled for approx 2/3 hours! Crazy!

He was alright don't worry!

Bur perhaps the most interesting was the discussion of the pre-hibernation ritual for the Tortoises. I never knew any of this.

Yeah! With that we reduce light an heat over the 6 weeks so it is not such a dramatic shock to them and they slowly go into hibernation!

Hibernating turtles in a fridge is one way to do things I guess! Do you have to check on them while they're in the fridge? And does it change the temperature noticably enough for them if you do?

Good idea to do the species thing at the end of each article as well, will be a while before you run out ;D

Oh yes, we check on them daily. We gently squeeze their feet to ensure they respond to us then we will open and close the fridge door repeatedly to allow oxygen to circulate. Then each week we will health check make sure their eyes nose and cloaca is clear otherwise we will remove them slowly from hibernation. Each time we check them we have to do it quickly and the temp will go up in the fridge but not enough to cause problems fortunately! We ensure the fridge is at a constant temp during the 6 weeks preparation so we take daily temp readings morning and night also! It’s a very interesting process I will say!

Thank you for the wonderful info regarding reindeers! I havent seen a real one in my life. It must be fun being able to look at and interact with different animals every day in your line of work. I love the picture of Basil! Such a cute goat! 😊

It certainly is fun, I’m very lucky! Hopefully you will have the pleasure of meeting a reindeer someday to understand how beautiful and incredible these animals are. Basils the best!! You will see lots of photos of him within my posts- he’s my favourite!

Hehe looking forward to seeing more of Basil! Cute goat! Animals are the best! When i was young i remember i have a huge interests with animals. My favorite ones are dogs by the way. 😊

Congratulations @amavi, this post is the most rewarded post (based on pending payouts) in the last 12 hours written by a Dust account holder (accounts that hold between 0 and 0.01 Mega Vests). The total number of posts by Dust account holders during this period was 3579 and the total pending payments to posts in this category was $586.41. To see the full list of highest paid posts across all accounts categories, click here.

Congratulations, your post received one of the top 10 most powerful upvotes in the last 12 hours. You received an upvote from @curie valued at 48.97 SBD, based on the pending payout at the time the data was extracted.

Wow, your description of the Caribou... Nature's ingenuity never ceases to amaze me...

Much obliged to you for the superb data with respect to reindeers! I havent seen a genuine one in my life. It must be fun having the capacity to take a gander at and associate with various creatures consistently in your profession. I adore the photo of Basil! Such an adorable goat! 😊

I have a new respect and admiration for Reindeer. Well done!!

nice post...
i followed and upvoted you...
help me to get followers and upvotes...
thank you...

You were right... you have some great photos here... i'll have to do a painting and let you know for sure... again awesome pics

That’s exciting! If your ever stuck for ideas give me a shout I have 1000s of pictures of basil to draw from haha just kidding (or am I?)

o man..... i need more hands to do more arts hahaha... i'm going to have to take you up on that very soon... and if you have a fav pic out of all your animal shots i'd love to paint it :)

What a beautiful creatures

What a great group of friends :) Very informative post. Thanks for taking the time. Upvoted!

Stunning! I can't believe I've been on Steemit for over a year and I'm just now finding your blog- you've got a new follower and tell Basil he's got a new fan as well <3

To be fair I have only been on about 4 days now so you've caught me right at the start of my blog so I really hope you enjoy it for the future. Do check out the post solely dedicated to Basil :)

I JUST finished it and left a comment! You almost had me in tears! <3

The @OriginalWorks bot has determined this post by @amavi to be original material and upvoted(1.5%) it!