Why the situation is grim...

Yesterday, I had a small debate with a friendly acquaintance. We have different opinions and we respect that. We both enjoyed the back-and-forth.

He recently started working and paying tax and he told me that he feels good about paying tax, like he is contributing back to society.

I asked him: Do you know that taxation is theft?

He responded: No, it's not. It's my way of contributing to everything.

Me: How do you feel about your tax money being used for things you don't agree with?

Him: In that case, the good outweighs the bad and I can live with it.

Me: But what if you had the choice of how you wished to donate and contribute your money, instead?

Him: If I was not required to pay tax, then I would not contribute a single cent to anything, except for me.

Contradiction, much? We spoke about how he would voluntarily need to contribute if he wanted the roads fixed near his house and how he would have to shop around for a doctor if he needed one, etc.

My second question was: How do you feel about your tax being used to pay interest on the national debt?

Of course, like most people, he had no idea how money is really fraudulently created and what that means in terms of the burden to pay it all back.

I then transitioned into another favourite topic of mine and said to him that ultimately, government is the threat of violence against me and will kidnap me.

Him: How so? Give me a real example.

Me: Yes, sure! I was once given a fine for not wearing my helmet while riding my push bike.

Him: You would have to go to court.

Me: But I wouldn't go because I don't recognise the authority of the court over me.

Him: Then you might have an arrest warrant placed on you.

Me: So they would kidnap me and throw me in a cage?

Him: Ahhhh... I see where you're going with this.

Me: So they would kidnap me and throw me in a cage?

Him: Well, you might get some community service order given to you, first.

Me: I won't do it. So they would kidnap me and throw me in a cage?

My point was proven.

Me: How do you feel that I would be kidnapped and thrown in a cage all because I chose not to wear a helmet on my push bike?

Him: Well, you broke the law, so you have to suffer the consequences of doing so.

And, that's where human freedom ends. With the admission that we do not have the opportunity to be free. That we are to permit our masters to steal from us. The basic disconnect from reality, where people should be kidnapped and put in cages because they made a conscious free choice that had no impact upon anyone else.

How can you convince brainwashed state-ists that it's not right?
Why do they wish to live in chains to the whim of their government masters?

In the mean time, I'll be keeping a poll of how many state-ists think that I should be kidnapped and put in a cage because I want to ride my push bike without a helmet. Yes, this is planet earth in 2017. Dystopia is here. 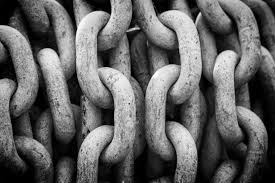