Our current society has seen the destruction of unions and a concerted effort to show unions in a negative light. Our new ivory tower philosophers pushing their divisive ideologies love to point out that unions were historically racist and sexist institutions. The IWW stands in stark defiance to these myths. Anyone could join black, white, mexican, male, or female and everyone had an equal say in the strategy and actions of the union. It is because of this that the IWW was viciously fought and its members oppressed by elite and government forces like the military and police. Meanwhile unions like the AFL who did not allow blacks, mexicans, or women were held in high regard by political parties in the USA. The decline of union power and the IWW in particular are connected and go hand in hand with the decline in economic equality.

I think this documentary is particularly important because there is a condescending attitude out there now that old white guys like those in this documentary are all racist "deplorables." Perhaps they are just working class people trying to take care of their families while grabbing onto the only ideology being offered to them. Most take no part in politics or voting at all. When there were alternatives like the IWW showing how different people could come together and fight with solidarity to make all their lives better they joined. This has been violently repressed and hidden from history. Left with no alternative most just become inactive and apolitical.

The IWW still exists and anyone can join and organize their workplace: https://www.iww.org/ 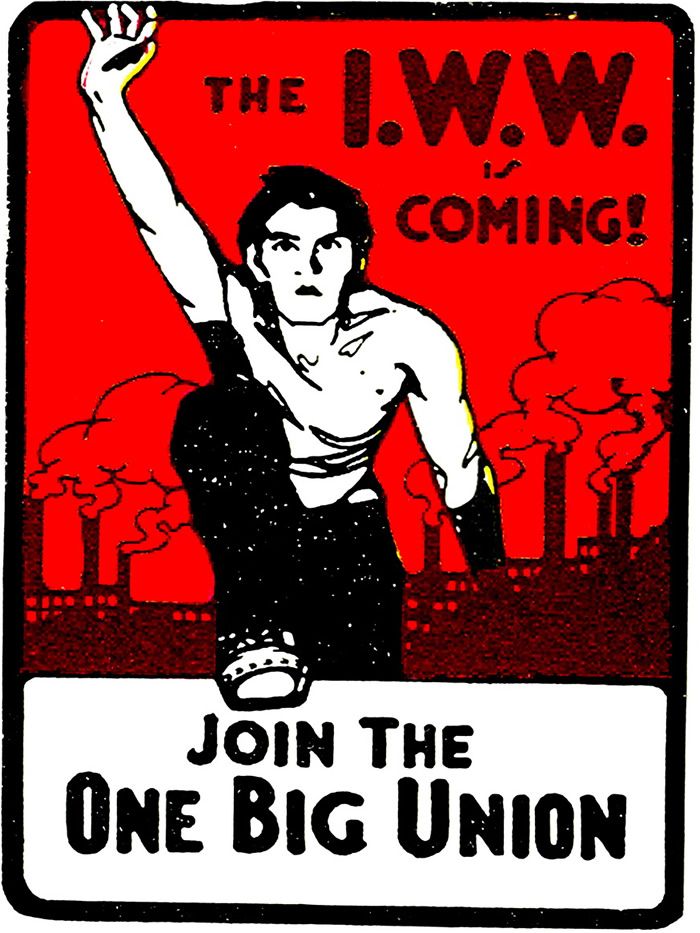 From the back of the DVD:

"The Wobblies from 1978 is a documentary about the IWW. Founded in 1905, The IWW, whose supporters were called “the Wobblies” was a remarkable organization and this documentary captures the struggles, the spirit, the songs and satires of the movement. It features interviews with workers who participated in various IWW campaigns from the timber fields of the northwest to the Lawrence strike (1912) and the Patterson strike (1913) in which the IWW brought industrial unionism to fragmented and craft-conscious industries. None of them has lost their fervor, their belief in the revolution or their marvelous sense of humor. What other documentary offers a “talking head” who can both describe the debates in the lumber camps over the Russian Revolution and play a musical saw?

Beyond the powerful narratives, this documentary retrieved a terrific selection of old and archival footage, including cartoons and graphics, giving a narrative structure that provides a context for the interviews. The only intermittent narrator is Roger Baldwin, the founder of The American Civil Liberties Union, who at age 95 wrote his own script based on his brief membership in the IWW in 1919."

For film geeks such as myself, Bird and Shaffer describe both the making of this particular video and, in a retrospective after almost 30 years, its place in documentary movie history. For any student of documentaries as a specialty, this addendum is almost as fascinating as the main production. Inspired by The Sorrow and the Pity, the 1969 documentary about Vichy France, Bird and Shaffer claim that TheWobblies is the first of the “new wave” of documentaries that brought both new topics and new techniques to the field. All of the “leaders" and how the Wobblies despised this term, were dead since this documentary was produced 73 years after the IWW was first organized. The producers, of necessity and of choice, had to interview normal IWW workers who became the “talking heads” for the production. Responding to a shift in labor history in the 1970s which emphasized the narratives of “ordinary workers” in contrast to featuring union officials or institutions Bird and Shaffer were determined to reach the grass roots. They relate with affection the interviews they conducted and the difficulties tracking down potential interviews. Shaffer describes the difficulties, for example, of interviewing workers in Bisbee, AZ, where 1,100 Wobblies were dragged into the desert in 1917, a moment in the town’s history that the residents wanted to bury.

They have managed to rob us of all that history.

All hail the interwebz!