The Invisible Hand of Spontaneous Corruption 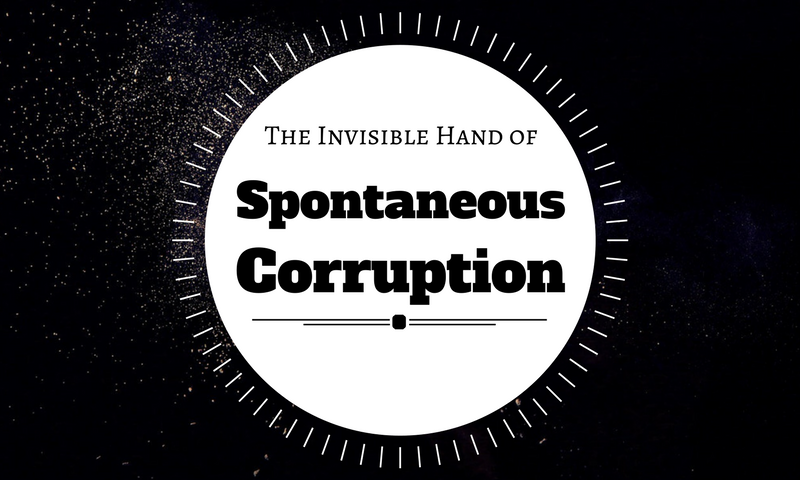 In The Wealth of Nations, Adam Smith observed that markets spontaneously generate unintended order, as if an invisible hand were at work in the free market. He identified self-interest of the individual as the animating force of this invisible hand, "By pursuing his own interest he frequently promotes that of the society more effectually than when he really intends to promote it."

I submit that there is another invisible hand, one by which government spontaneously generates unintended disorder. The animating force of this invisible hand is the same; each individual participant in government is naturally motivated by self-interest. But while self-interest leads to beneficial cooperation in a free market, it quickly leads to corruption when the same individuals wield coercive control through government.

"Although legislators are expected to pursue the "public interest," they make decisions on how to use other people's resources, not their own. Furthermore, these resources must be provided by taxpayers and by those hurt by regulations whether they want to provide them or not. Politicians may intend to spend taxpayer money wisely. Efficient decisions, however, will neither save their own money nor give them any proportion of the wealth they save for citizens. There is no direct reward for fighting powerful interest groups in order to confer benefits on a public that is not even aware of the benefits or of who conferred them. Thus, the incentives for good management in the public interest are weak. In contrast, interest groups are organized by people with very strong gains to be made from governmental action. They provide politicians with campaign funds and campaign workers. In return they receive at least the "ear" of the politician and often gain support for their goals.

In other words, because legislators have the power to tax and to extract resources in other coercive ways, and because voters monitor their behavior poorly, legislators behave in ways that are costly to citizens."

~ Jane S. Shaw, in The Concise Encyclopedia of Economics

Why do voters monitor the behavior of legislators poorly? The truth is that voters remain substantially ignorant of the behavior of their legislators because it is in their interest to remain ignorant. When a consumer is looking to buy a car in the private sector, it makes sense for him to invest considerable effort to learn which car will best suit his needs, because he will personally gain the entire benefit that such effort produces. But when a voter is looking to choose a representative in the public sector, it makes little sense for him to invest much effort in choosing the best candidate, because his chance of swaying the outcome of the election is very small and because he will not gain the lion's share of any benefit produced by his effort in any case--it will be distributed among all. So while the advocates of government say we need government to address public goods problems, government necessarily creates a public goods problem: the problem of controlling government.

But even when government pursues the public interest in good faith, it will fail. Ludwig von Mises delivered the crucial insight that government control destroys economic calculation. Prices are the necessary signals of economic calculation because prices reveal the preferences of individuals. Without this measure of what individuals prefer, it is impossible to make valid economic judgments. And intervention of government in the market distorts prices. The democratic statist ideal is for wise representatives to make economic decisions in the common interest of all. It is widely supposed that the more wise and just these representatives were, the more we could trust them with, and if they were sufficiently wise and just, they could simply direct our economic affairs in a manner beneficial to all. Ludwig von Mises refuted this vision; government representatives, however wise, can never reasonably manage the economic affairs of men because the act of governing itself destroys the measurement of individual preferences necessary to make valid economic decisions. The democratic statist ideal cannot work.

Many statists may have benevolent intentions. They may honestly desire your benefit. But if they do, then their advocacy of the state is misguided because government's invisible hand of spontaneous corruption will necessarily generate unintended disorder.