The Sound of Silence.

The Sound of Silence

Every day we wake up and enjoy the good things of life. We say hello the next door crush, to the wife, to the husband, to the brother, to the sister, to the girlfriend, to the boyfriend, to the boss we hate and the one we love, etc. We complain about our lot in life, we laugh at the little joys of life. We gossip, we chatter, we talk about the desires we hope to achieve, our aspirations, etc. That is called living. Crossing the road, we look left, then look right. Simple task. We were taught how to do that from the kindergarten. You put your left foot forward and suddenly heard the car noise of the drunk driver doing a 150km/hr in the 50km/hr densely populated residential neighborhood. You instinctively jumped back just in time to feel the close rush of air trailing the now passed mad driver. Wheeeeeeewww! That was a close shave, you might be tempted to shout out some profanity to the driver; even though he's out of hearing. Maybe he deserved it for being such a homicidal reckless pain in the butt.That is just another day for us. We think nothing of it.

Finally, we find it, then dip our hands into the pocket to retrieve our latest high-quality earphones which were purchased the week before. We plug it in our ears and get transported to the world of Sia as Fire Meet Gasoline. There's no denying she's got a great voice. Some minutes later, we arrived at the train station. We are forty minutes early. Thank goodness, we won't be coming late to the office meeting like had happened three times last week. Minutes crawl by, we could hear the chatter of people, the bustle of the city. A dog barking in the distance, an impatient driver's honk, the carefree giggles of the schoolgirls walking past, the street performer playing a soulful tune with a plate in his front for donation, etc. Life is going on. 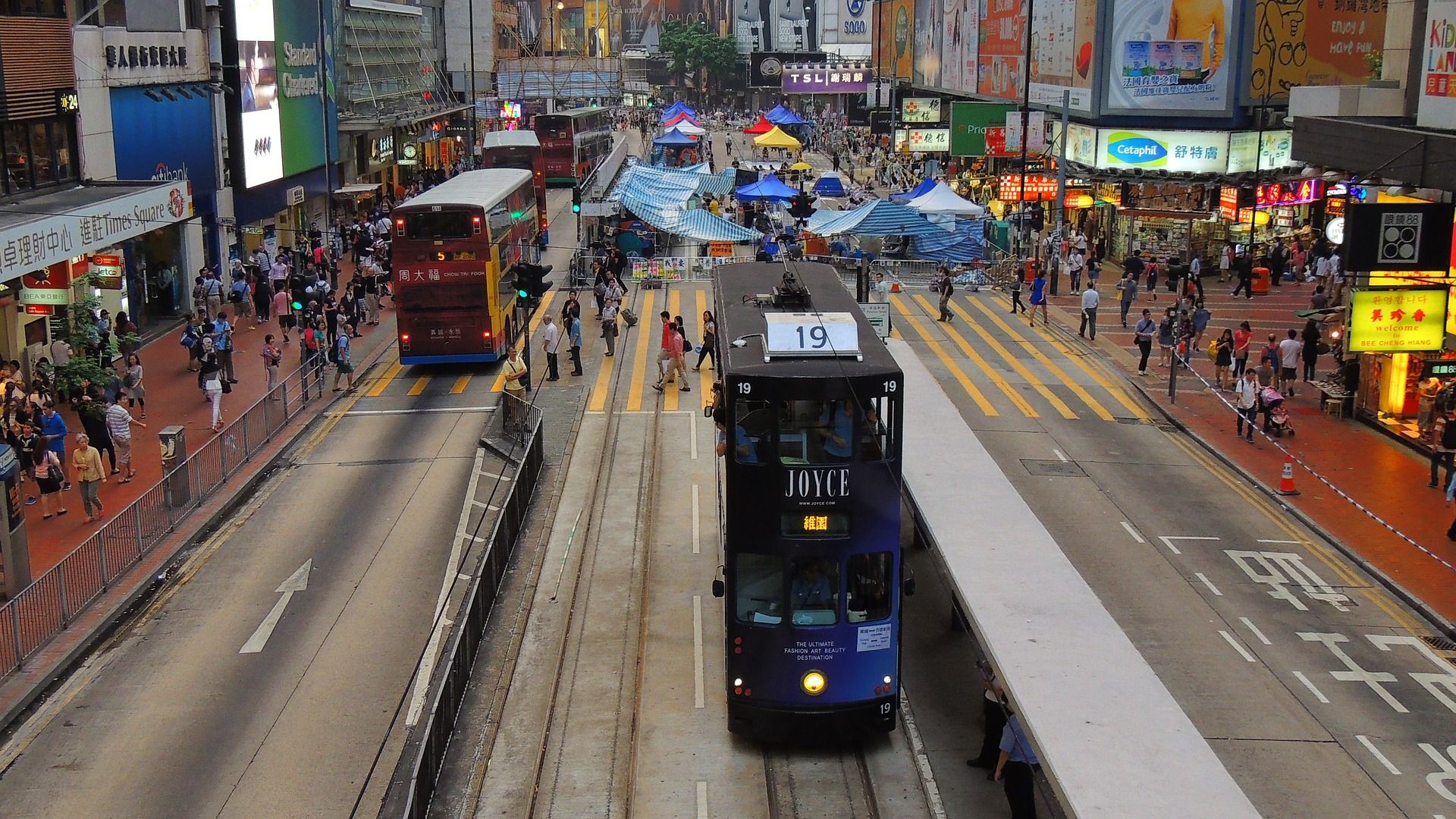 Moments later we hear the familiar chugging sound of the approaching train. We fold up the newspapers, rolled up the earphone and return to its receptacle. Walking briskly to the train's entrance, behind, a friend called out our name, and we turned around as a big smile lit up our face as recognition registers. We exchange pleasantries and boarded the train together. The train slowly pulled out of the station with increasing chugging sound. The whistle makes a rather forlorn last call as it gathers momentum. As it reaches its full speed, the sound reduces, and we strike up a conversation with our friends who are sitting in front of us as there is no space beside us. It was easy maintaining conversation as they are within hearing distance. Everyone is minding their businesses, and with the somewhat noisy train, no one objects if you talk.

Thirty-five minutes later the trained slowed and stopped. It is our stop. We bid our friends farewell and whistled for a taxi driver who stopped and dropped us right in front of the office. We acknowledged the greetings from the gate man without looking up or remembering his face, and walked towards the office. Our colleague spotted us through the glass and was trying to tell us something. He mouthed the words but we could not quite get him. The glass makes it hard to hear. Frustrated he gave up. At the reception, we saw a news piece showing a picture of our street, and our curiosity got the better of us, we paused in mid-stride to know what the story was about. The TV volume was too inaudible due to the volume set. We moved closer and increased the volume. The government is planning to build a dual carriageway. Oh, just that? We walked along to the office. While climbing the stairs we saw the colleague that was mouthing words as he was walking down, he explained he wanted us to help lock his car. But not to worry he is going to do that now. We mumbled our apology for being unable to understand; he nodded in acknowledgment.

Mr. Robert lives a life filled with what had happened to us today, but with an exception. We listened to Sia, but he has no opinion on what Sia sounded like. It is news to him that Sia has an exceptional voice. But that news is best drawn as pictures than told. He lives that moment we could not hear our colleague. He lives that moment we could not hear the news but could only see the pictures.He would not have heard the car that narrowly missed running over us. Mr. Robert had never heard a sound. Mr. Robert is deaf. PS: Show some empathy for the deaf. We enjoy the different music of life, they only hear the sound of silence.

your discprd link seems to be broken

This post has reminded me of a friend so dear, smart and brilliant but deaf and dumb. We communicated with signs and written notes. For years now i lost contact and the struggles o f life has put us in distance. I don't even know how to reach him now. Lost his contact and totally forgot him. I am going to start the search for him.

Thanks for this piece.

Isn't there a song sound of silence?

I think there is, just searched now and found some. Thanks

The first was Sounds of Silence, a song and an album by Simon and Garfunkel.

Nice story and very good thinking
Thanks for good share

Man you definitely deserve every up vote on this. Extremely well written. Great work. I am resteeming it on post and following you to.

Silence is better than a meaningless word.

Thanks For Your Good info.

This was very well written. There many Mr. Roberts with other challenges and I think we need more of this for awareness.

I agree with you there are many Mr. Roberts out there.

I just followed you and upvote ur post will you do the same ????

Very interesting writing
The purpose of sound is silence

The title alone looks paradoxical, and catchy, i like the way it reflected into the story, i enjoyed it certainly

I wish, you would be the part of our No Smoking Campaign. Its our privilege that you are one our supporter. We together try to reach this campaign to each and every steemian's. Come and join us..

nice piece. Thanks for sharing it!

wonderful writing, it highlights the real truth of our life. love the post.

I love the way the story builds to the twist at the end. What a beautiful lesson. Wow this reminded me of my friend great guy funny too but deaf. We were friends fir several years thsn i moved away for college we stayed in contact for a while than we both got busy with our life and lost contact. I came back in the summer only to fibd out he was married and has a little girl now. Amazing guy great father

I love this post, a great reminder to always be mindful & grateful for everything.

Congratulations @adsactly, this post is the forth most rewarded post (based on pending payouts) in the last 12 hours written by a Superhero or Legend account holder (accounts hold greater than 100 Mega Vests). The total number of posts by Superhero and Legend account holders during this period was 32 and the total pending payments to posts in these categories was $1336.37. To see the full list of highest paid posts across all accounts categories, click here.

As I am reading this post I realized how listening is much more significant in our lives. Stopping, sensing and listening is just the other way of appreciating the beautiful things that surround us. People with sight issues really don't have something that is missing to their persona as a human being because they are greater than the ordinary people who are less appreciative, even though they cant see or view the things in the surroundings they are much more in the next level of greatness because they can sense the deeper thoughts of the heart that no 'iris'( part of the eye who conveys colored images) can express thoroughly. I do not pity the people who have eye problems and having issues in seeing, nevertheless, I pity myself for not stopping by the things that I may appreciate more through deep listening. I am proud of the people who are blind because they may lose one sense they can never feel but they gain something more special sense that only a few ordinary people will notice and that is the sense of ''well-enhanced sense of listening'' and giving precious time for appreciation.

Very exceptional post for me really because i can relate. They really hear the sound of silence. I am still grateful for having my hearing abilities intact and the only way i could show how grateful i was, was when i was working in an organisation that helped people with disabilities.
One needed to remember that shouting could make it hard for them to lip-read
So we did our very best to try to use body language and facial expressions when you speak as this helps give the person you are speaking to some context in case they missed part of what you said. One could only imagine. I just tried to close two of my ears tightly to have a bit of the feeling of being deaf, and it is really scary and if you try it you could literally hear the only sound Mr Robert hears. Our rent on earth is to reach out to those who don't have as much privilege as we do.
By the way i really love the wordcloud pic.

Sometimes when I hear the sound of trains in the distance, it is though that is a silence that I crave more than the silence of complete nothingness.