I recently posted a video of me jamming in C major. My plan is to post a series that will explain and teach anyone willing the necessary basic skills and knowledge of how to improvise in this "modal" manner on the guitar.

This is also for anyone who is interested in learning a little bit about basic music theory, how to make chords, play basic scales. The C major scale is not style specific, it is used in all styles or genres of music. It can be played on many instruments.

If you are ascending through the scale, every time you come across the next C, that is called an Octave, if you are descending and you hit the next C that is also called an Octave. This is so because "Octave" simply is the name of that interval.

We can visualize the Octave by drawing 13 boxes. In the first box is a C and in the last box is also a C note. We can see how many other notes occur before we come across the next C (answer=11, though not all belong in the C scale).

Here is a chart I made showing the interval boxes and corresponding interval names. Note that the distance is measured by 0.5 tones or half steps. Two half steps make a full step. The naturally occurring distance between E to F and B to C is a half step or m2. Intervals do not stop at "P8" but for the purpose of this exercise I stopped it there. Here is a fun fact, if you are playing the white keys only on a piano, you are playing all the notes from the C major scale! The black keys correspond to the highlighted boxes above, they do not belong to the C scale! 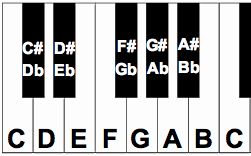 On the guitar, playing the C scale is not as straight forward as on the piano. Here is what it would look like if you lay a guitar on your lap and look down, and visualize all the notes that belong to the C major scale.

What is a chord? The definition is, 2 or 3 notes played at the same time make up a chord.

We can derive 7 standard chords from the C scale. To build the standard chords of the scale take the 1st, 3rd, and 5th notes, repeat the process but start at the 2nd note, then 3rd note then 4th note as follows:

Some additional questions that might arise:
Why only 3 notes?
-the 3 notes are only the barebones structure, notes can be added, try adding notes, experiment! On guitar, 6 notes maximum are possible.

What the heck is a diminished chord?
-diminished occurs when you build your chord based off the 7th (M7) degree. In C major the vii° chord's notes are "BDF". This is called B diminished, since the distance from B to F is a "diminished fifth" and it gets its name from this.

How do I know if it is a major vs minor chord?
-analyze the chord in question by using the interval chart. Is the second note in your chord a M2 or m2 interval? If M2, major, if m2, minor.

Any questions or comments are welcome, please send comments/feedback.