today I would like to invite you to get to know a really cool and special place 💥 :

The Semenggoh Nature Reserve and Rehabilitation Centre on the Malayan part of Borneo. The reserve is located about 20 minutes from the city of Kuching in Malaysia on Borneo. 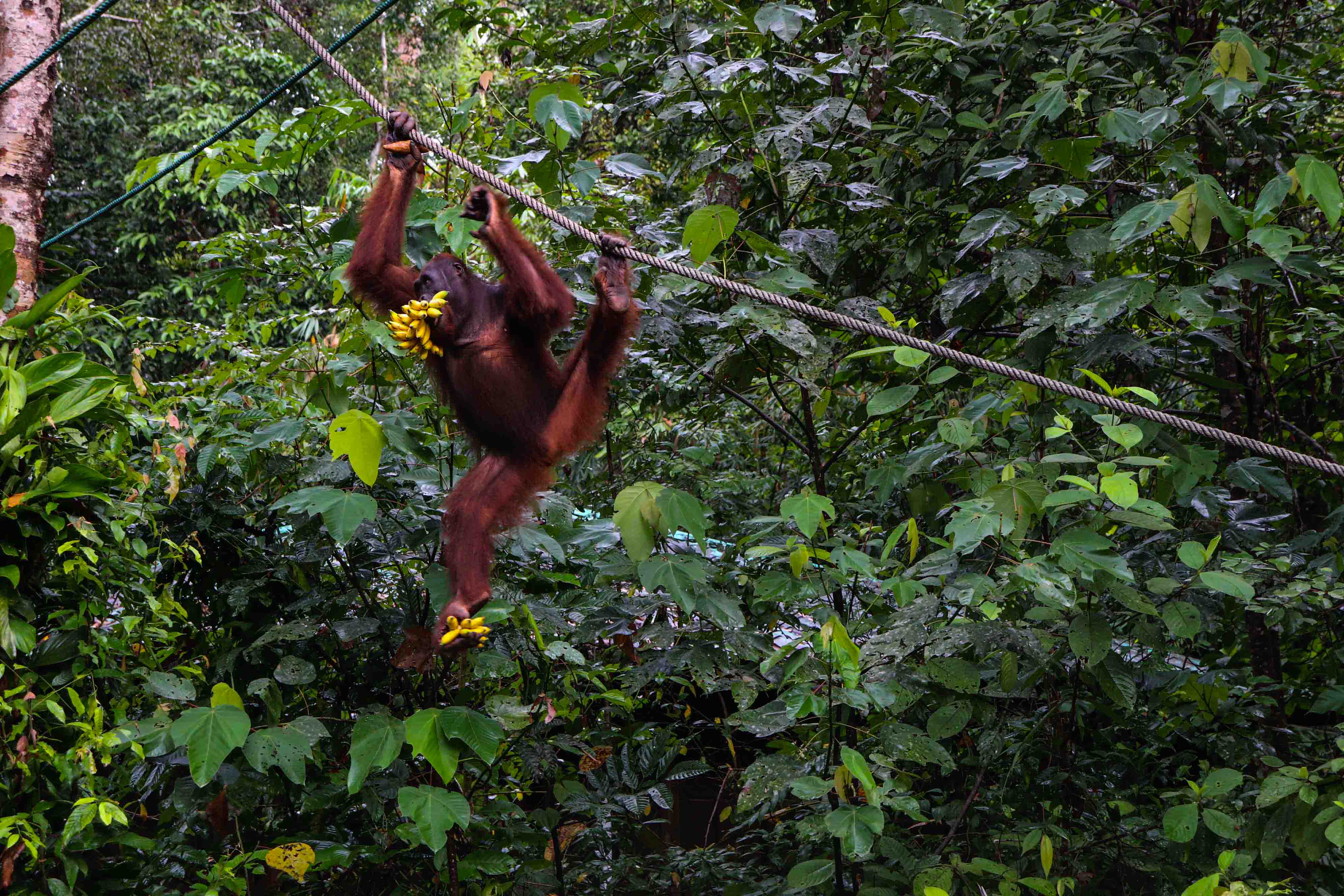 (Do you care for some bananas?)

It's an rehabilitation center for Borneo-Orang-Utans that have been captured, are orphans or otherwise neglected. Orang utans are originally from Borneo and Sumatra. What they basically do in the centre is that they train the orang utans to live on their own in the jungle. So you could argue it is the opposite of a zoo. The rangers can still take care of them if something needs to be done but they basically live on their own in the forest around the reserve. That's why they are called semi-wild orang utans.
Also new orang utans are born there and know how to live freely from the beginning of their life. In total they have 29 orang utans in the reserve. Some of them never show though and one old female even disappeared and was never seen again. Since orang utans are severely threatened and are on the edge of being extinguished due to destruction of their natural habitat and poaching - oftentimes they are even held as pets - the project seems to be of even greater importance. As an interesting side note “orang utan” means “forest people” in the local language. (Main Entrance to the Reserve when You Come from the City) 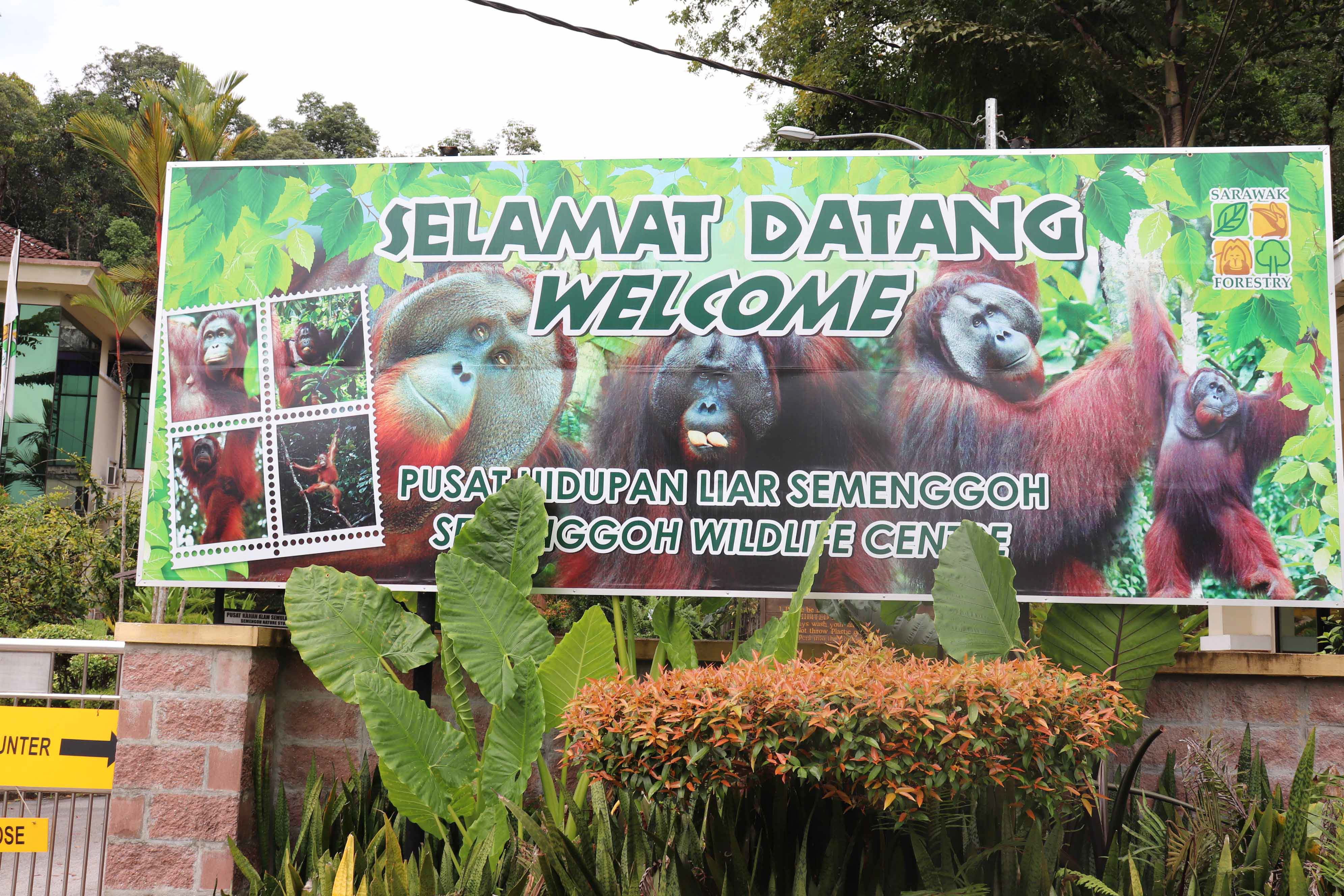 How to get there

There are two feeding times. From 09-10 a.m. and from 3-4 p.m. This is the chance to see the orang utans since they will come to a certain feeding platform. You can go to the centre from Kuching by bus, taxi, Uber (or Grab, an asian alternative to Uber). Since we would have been too early if we would have taken the bus we decided to take an Uber which cost about 20 RM ( around 5 USD). When you go there you see the city most of the time one the way, but suddenly there is the entrance and you wonder if there can be a jungle where orang utans live. You pay 10 RM to enter the park and then it's about another 3-5 minute drive to the entrance of the jungle itself. (Second Entrance where you will get after driving for a couple of minutes. This is also where one of the feedings took place)

When we arrived the feeding had already begun and there were two orang utans literally hanging around on strings which were established for them eating bananas, coconut and other fruit. We were really happy since we actually did not expect to see any orang utans at all although it is an orang utan reserve. You see, it is fruit season at the moment and the forest is blossoming. The orang utans don't have to come to the feeding station since there is enough food in the jungle for them. Actually we met some people who had not seen any orang utans just the day before so we did not have any hopes. We rushed there and took some photos. 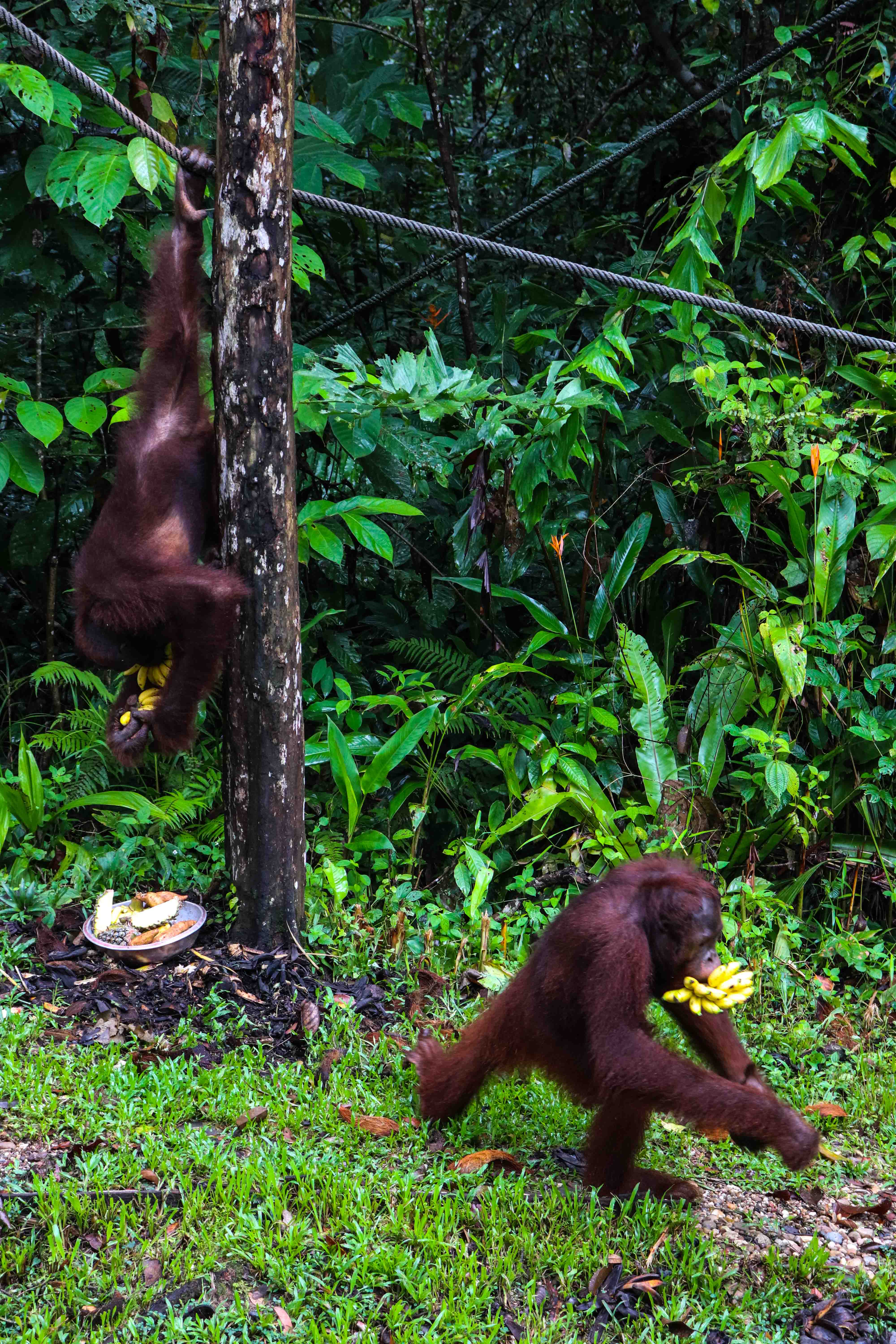 (This is what we arrived to - the feeding had already begun! - by the way how great is this scene? ) 😎 (Only Netflix is missing) 😝 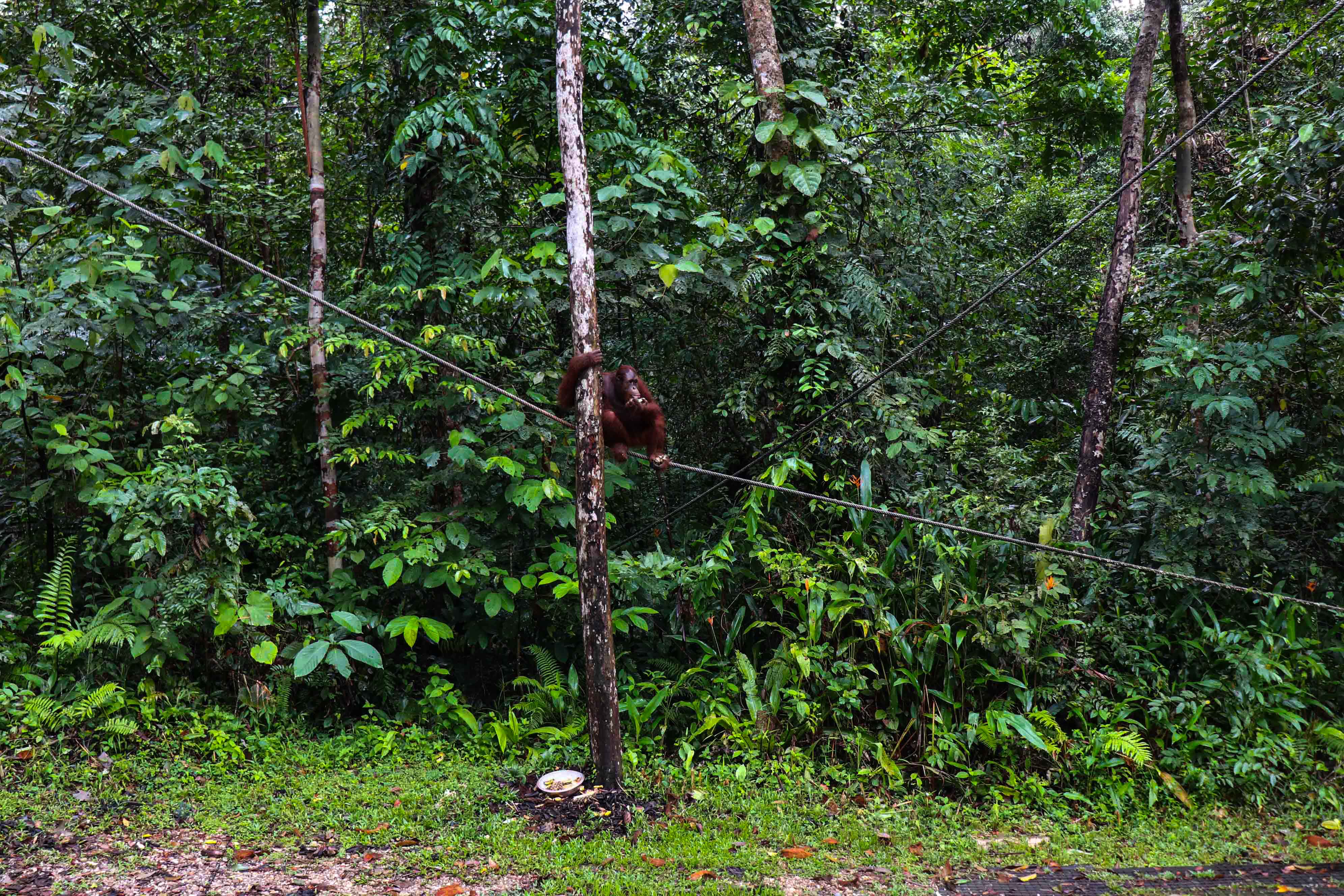 It was great. The rangers brought new fruit and the orang utans luckily took it and obviously enjoyed it very much. This went on for about 20 minutes. Then the ranger started to explain the rules to us and letting us further in the reserve. Check them out: (Rules when Watching the Orang Utans)

Actually I did not read up on anything beforehand so I had no clue what was going on there 😅 but suddenly there were crocodiles as well. Why not!? 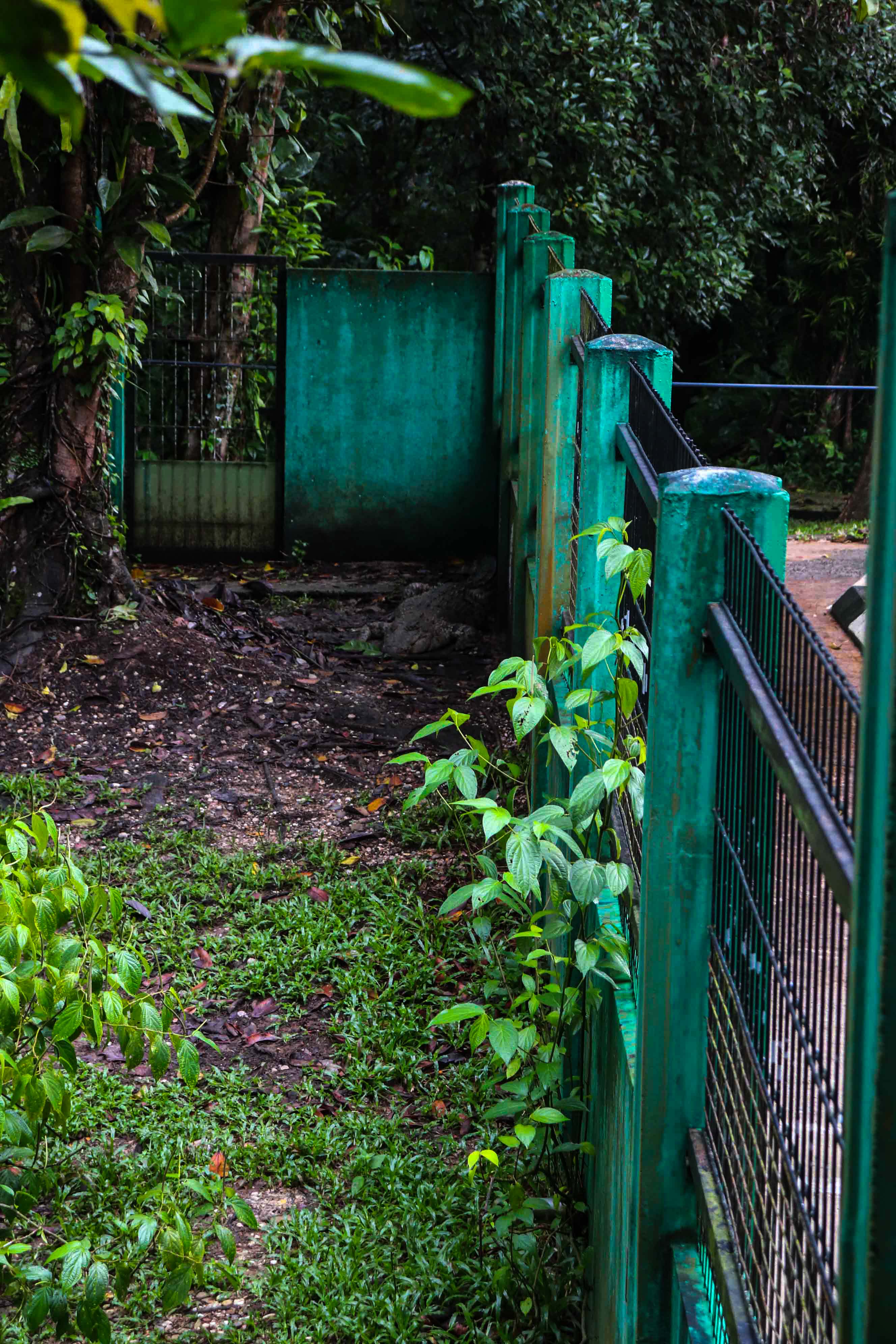 (If you look on the right side there is a croco!)

The ranger called out: “There is movement on the feeding platform”, and walked a path into the jungle which we followed. I actually thought we were already at the main feeding platform and was very happy to see the two orang utans. But suddenly, after a couple of minutes walking in the jungle, appeared this huge platform. It was almost like a stage. There was the possibility to stand and see the orang-utans climbing down to get their food. We were so lucky since there was one female orang utan with her baby hanging around her belly up in the tree. 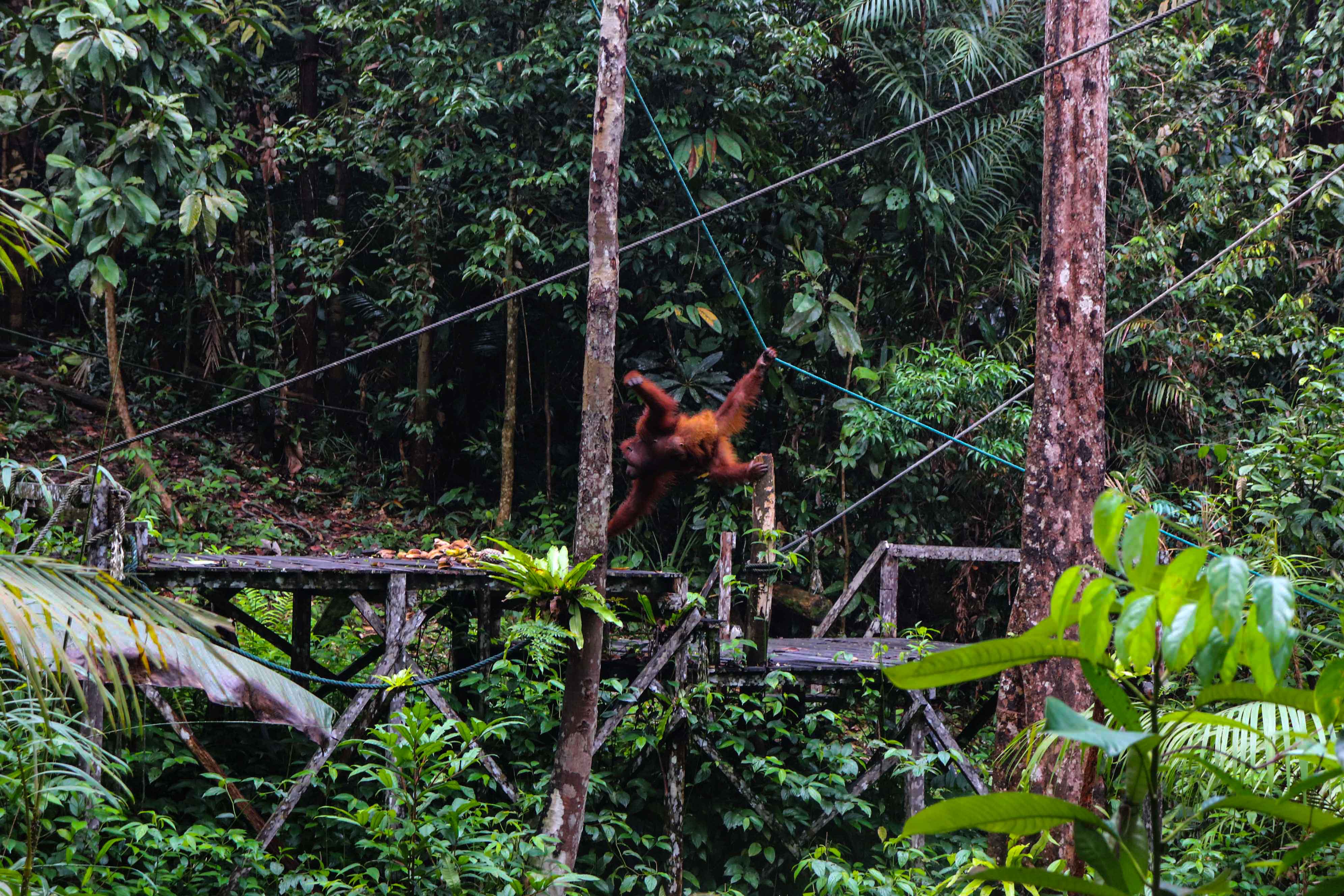 Incredible animals. So we watched the spectacle, being fascinated. She could climb up, down, just hanging there – no problem. One feet here, one arm there and all mixed up. Then even more orang utans appeared although it was fruit season! 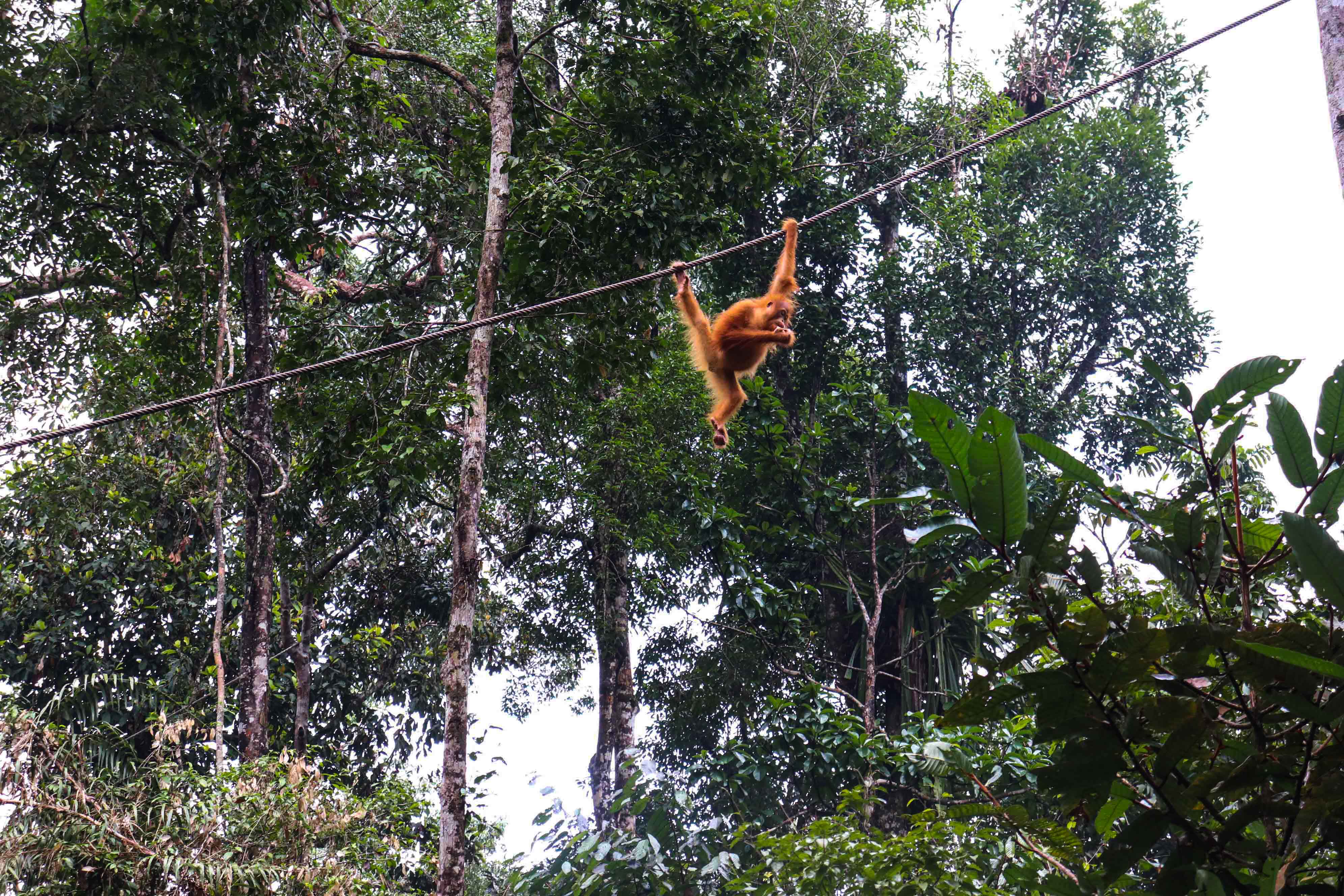 (I think this one was the smallest, you also notice that this is color is brighter)

Then something weird was happening. You saw bushes swinging from left to right. And almost all of the orang utans except for one really small and bright orange utan literally ran away. We looked to the left and there was this massive male orang utan with the typical cheeks. He just hung there and waited for the others to move out of his way.* I wonder what he thought about the humans watching since he directly stared at us as well.* 🙊 Then he made his way down, took his food and stayed there. Only a couple of meters away. Compared to the other orang utans this one was just so incredibly massive, huge and looked really strong. The others (except for the small one, I thought he might have been a child to the male orang utan !? Don't know) did not come back and stayed in respectful distance. It was really interesting to observe these character traits in the wild. He did not seem to have a problem with the rangers since they went in, put new food there and took close photos of the orang utan. Fascinating how some people have this connection with animals. 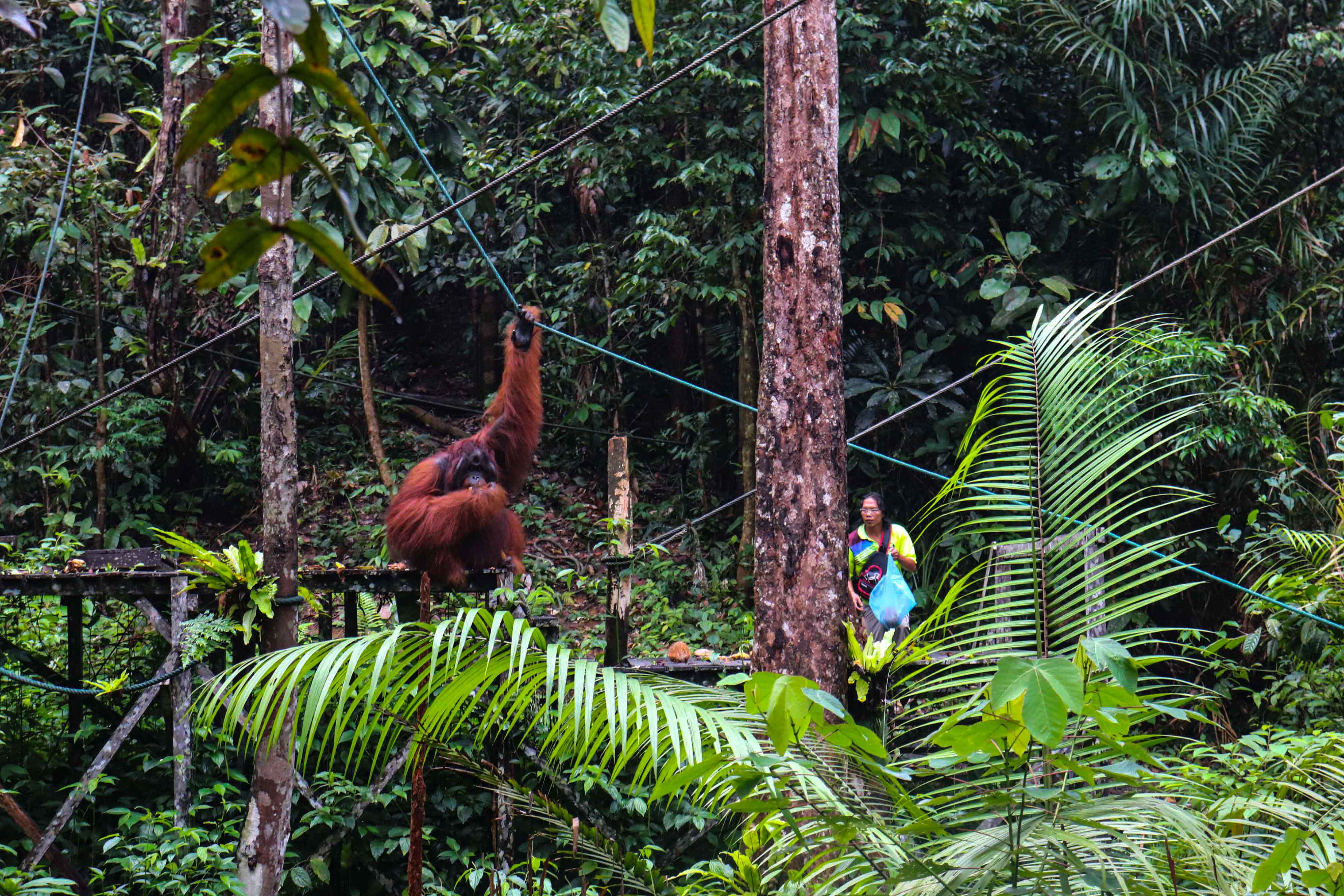 (The only human who can come this close while the king feasts? - His friend, the ranger!) One other highlight I had never seen before was an orang-utan opening a coconut. I remember vividly the last time I wanted to open a coconut and the orang utans definitely handled it way better. 💯 They take the coconut try to open it a little bit with there mouth or hammer it agains a tree several times until it cracks. Since I did not want to film all the time but enjoy myself watching I did not get a good video of this.

History & Family Relations of the Orang Utans at Semenggoh

After one hour at 11:00 a.m. we had to go back to the entrance. But this was not the end of it since we could read up on the different orang utans and their history within the reserve. It was again really fascinating. But see for yourself: 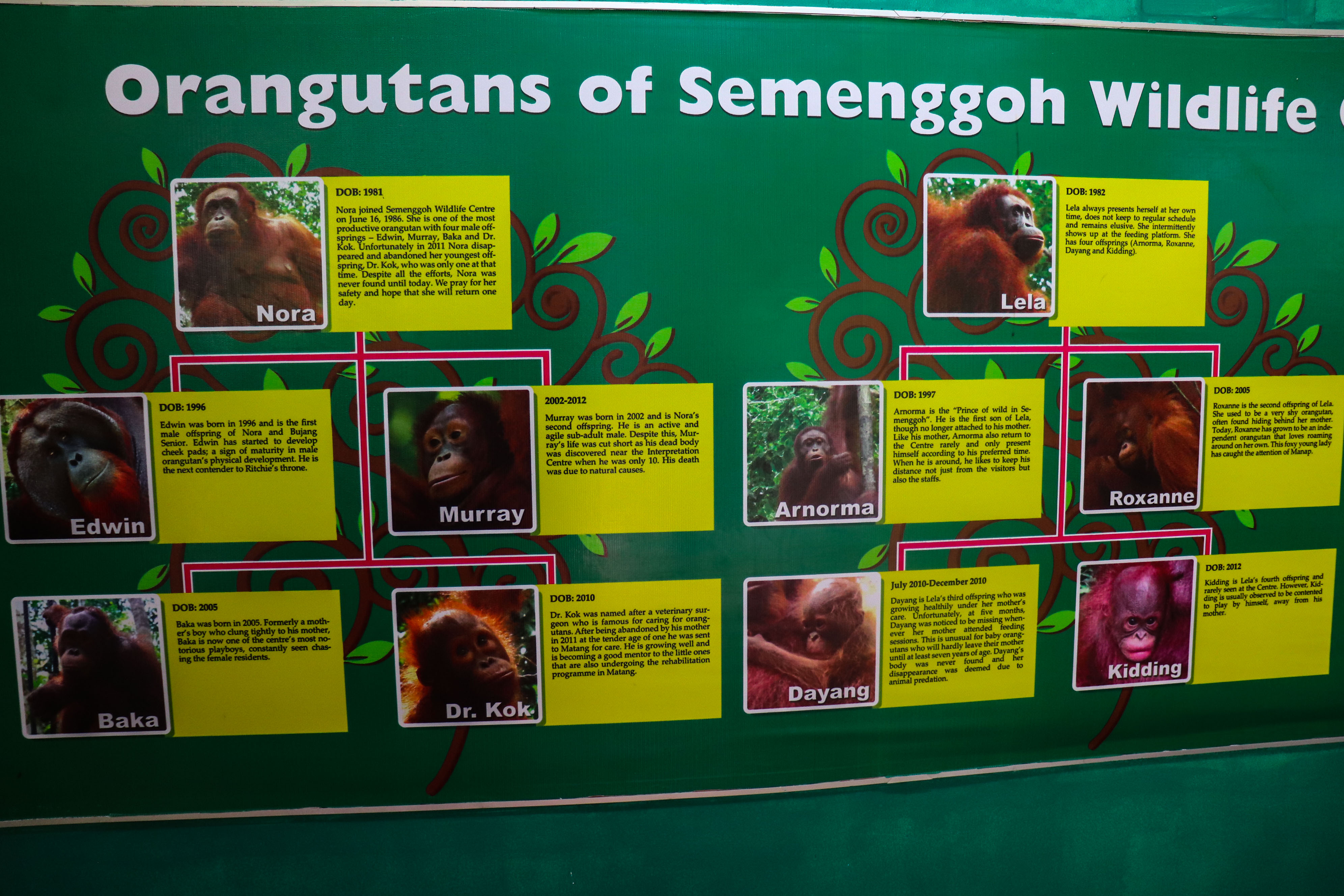 (Close up of one story out of around 30)

All content is created by me unless stated otherwise.

Wow, what an amazing experience. These apes are really special and it is great to see that there are so beautiful places like the semi-wild project!

Great article by the way. Your style has improved very quickly. I really love how you styled it and everything.

Yes it was really cool! Thx I actually put a lot of work in this post :D

Wonderful,. The best thing we can all do to help these amazing creatures is stop consuming products with palm oil in them, that is what is destroying their homes and its in lots of products. Mindful consumerism is how we can really help them.

thanks @tonysayers33. yes lately i have read up on this as well. it's just crazy.

Very interesting article and so informative. I find these animals intriguing, from a behavioural science point of view - I'd love to have the opportunity to see this place some day.

thank you. yes indeed very intriguing, i don't know too much about their behaviour but it must be very interesting. if you have the chance, definitely go :)

Orangutans are some of the most amazing creatures on the planet. My favorite author, Terry Pratchett, was actually a major supporter of various orangutan charities before he died.

wow, great that you can relate through literature. i did not expect that. definitely amazing creatures :)

its sounds amazing ,i would visit some day buut can u name where it is , i mean in which country ...

yes it is in malaysia