Exploring the adventurous parts of Langkawi

A few weeks ago I was in Langkawi, Malaysia waiting to get on to a boat for a delivery. After being stuck without a scooter in the populated southern city of Kuah due to the influx of people for New Years, it was time to get out into nature.

The mission was to drive north to see if we could go up to the Sky Bridge, which apparently has some of the best viewpoints on the island. Due to a massive amount of tourists, we decided to avoid it.

We quickly looked for the next possible option in the area. The 7 wells waterfall was the closest, just a few minutes drive away. It was an easy walk up a couple of hundred stairs to get to them. Long Tailed Mackacks owned the rubbish bins and threatened any human or fellow monkey who came near their gold mine of tasty treats. The only problem is that plastic was lying around everywhere, because the bins provided were not monkey proof. Quite ironic that there were posted signs indicating fines for littering.. 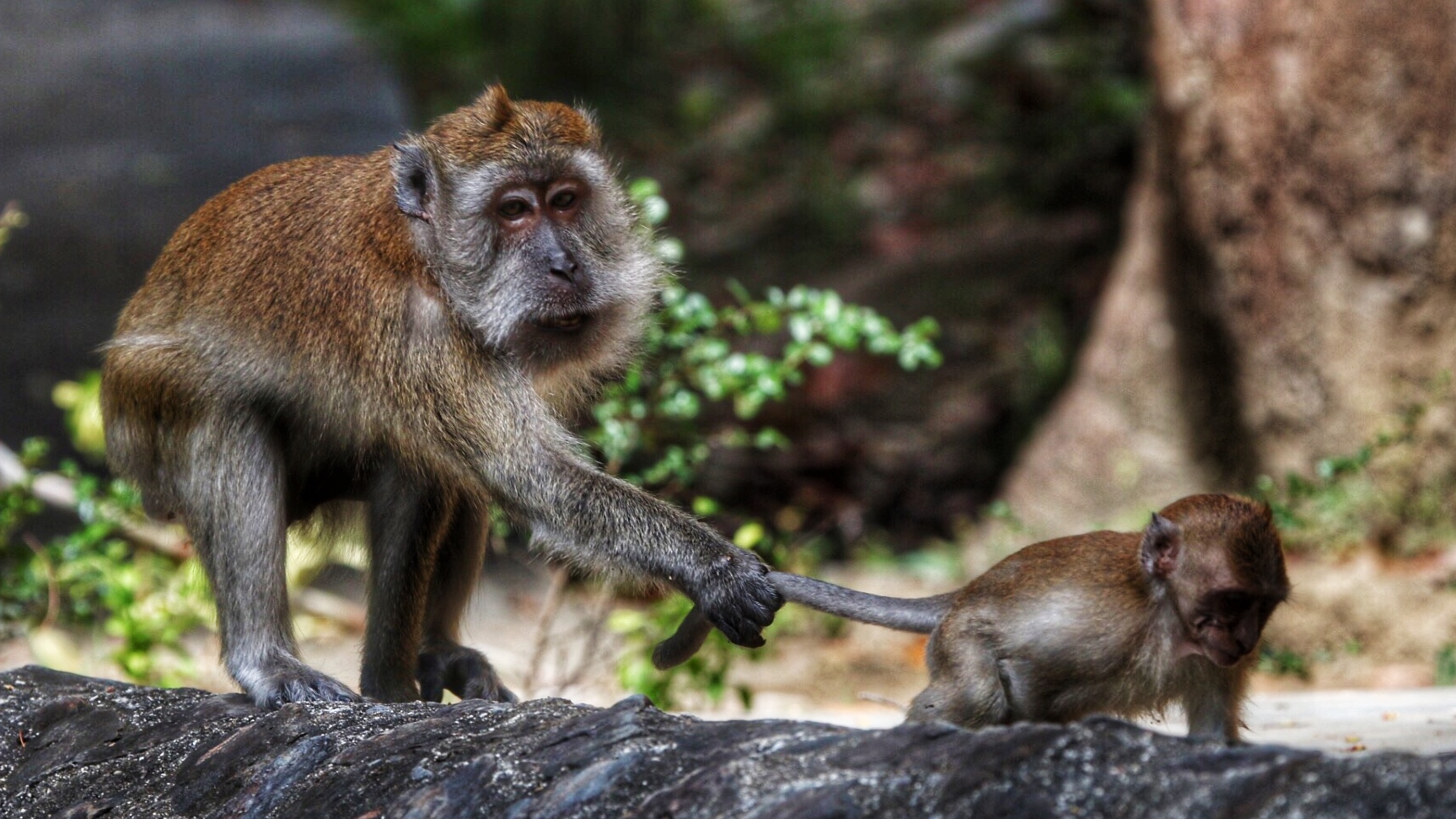 The aerial view from the drone was amazing, needless to say I take my drone on almost every adventure if the forecasted wind speed is low. After a bit of exploring around we settled for a hike in the mountains on the upper reaches of the waterfalls, and turned back when we ran out of water. 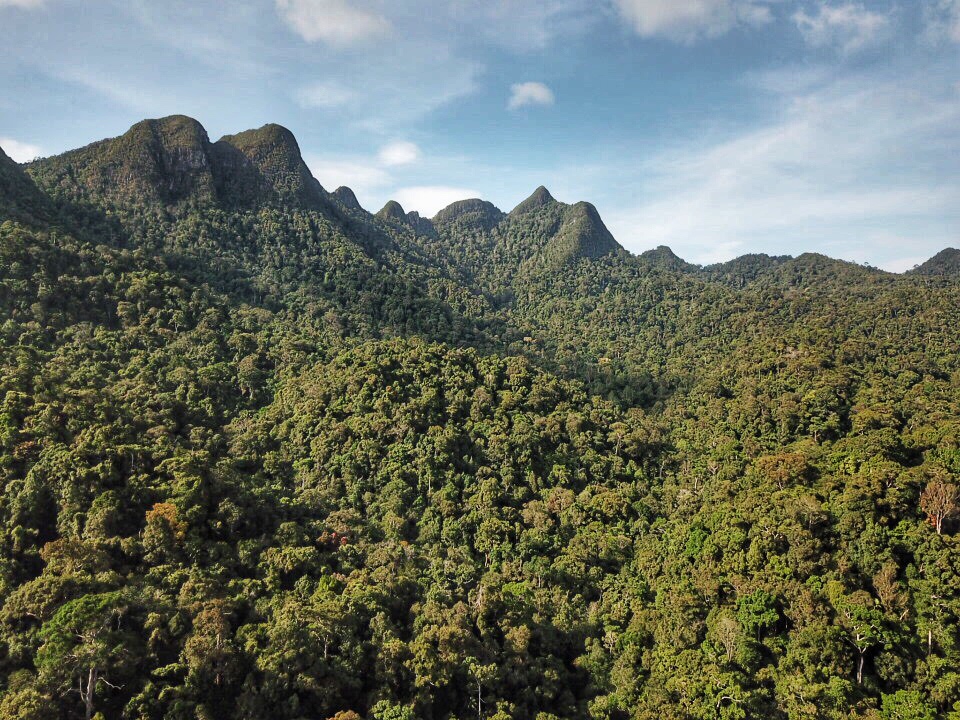 We came across a group of Dusky Leaf Monkeys, who were entertaining to watch and extremely beautiful. 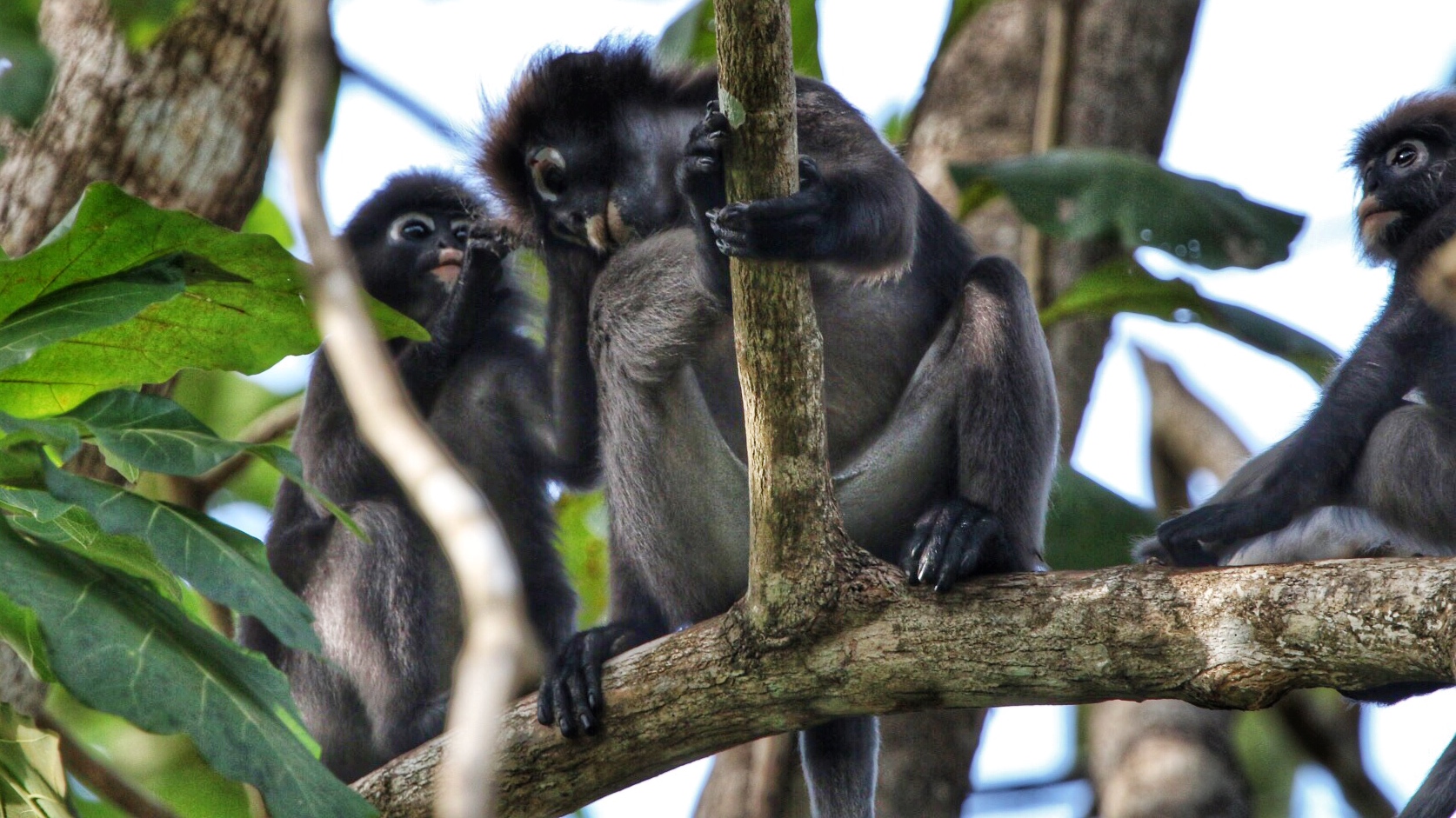 On New Year’s Day we explored another section on the north side. Onroute I flew the drone on the east coast near the river estuary tours, which are lined by a few limestone outcrops. 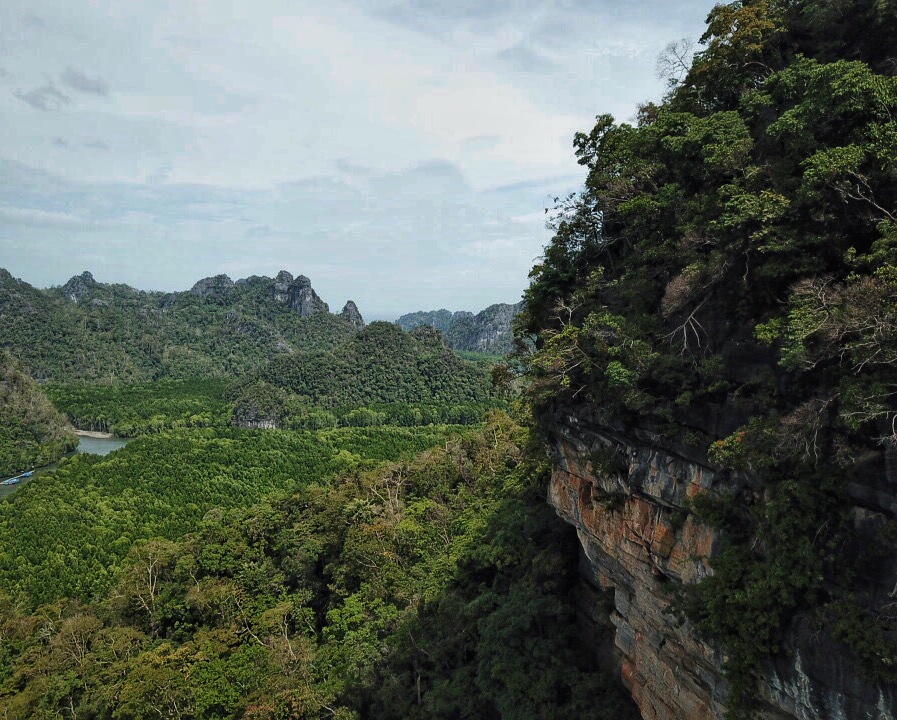 After the heat started beating down on us we decided to have lunch at Scarborough, which is famous for its fish and chips. We drank some tigers and ate a great meal with sand between our toes. 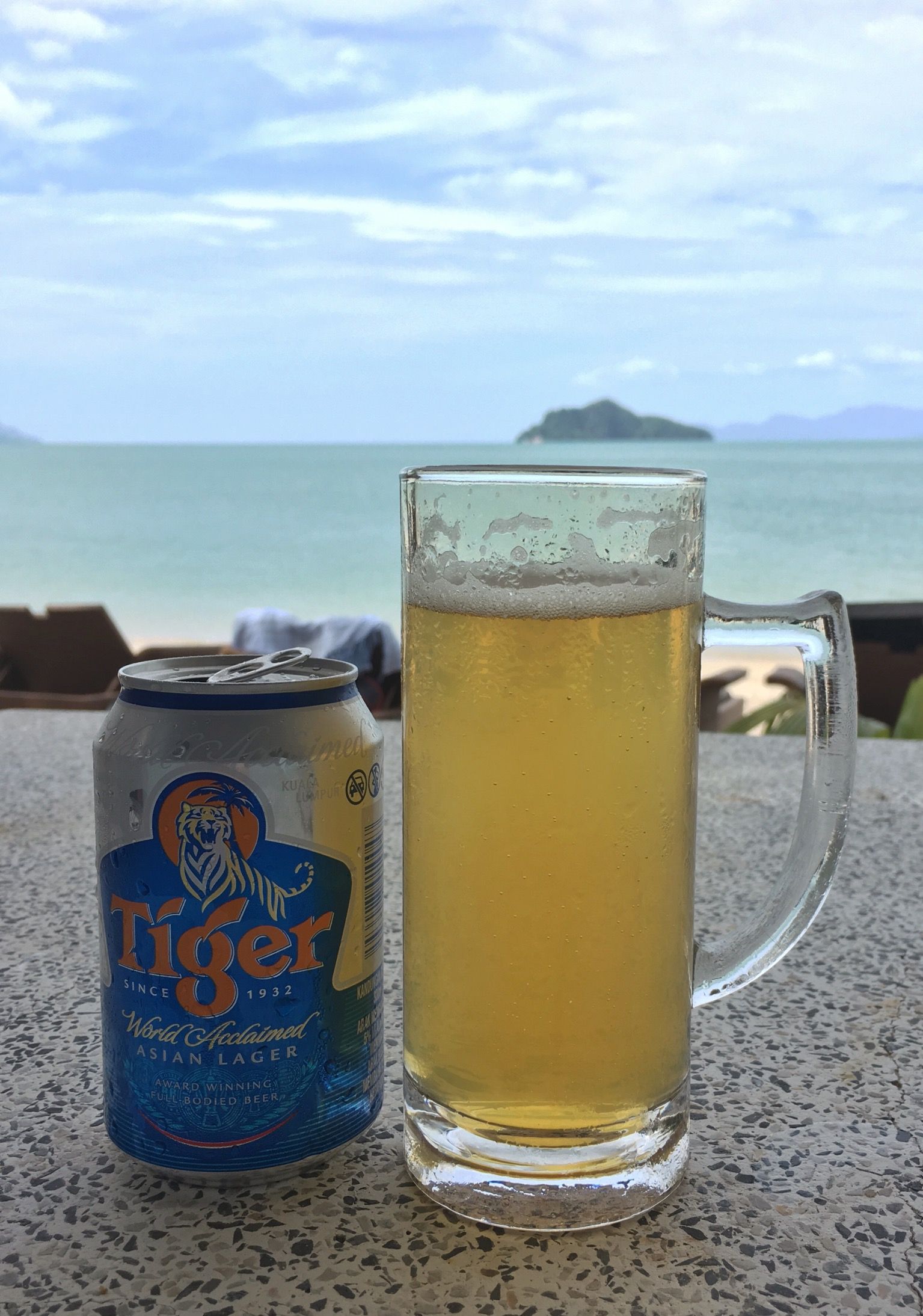 After lunch we took a drive along road 161 and discovered the Temurun waterfall. The walk to the waterfall was only 5 minutes from the road, and easily accessible. The river was quite dry so there was not that much water, but it was still enchanting and beautiful! We carried on heading west and drove as far as we could. We had noticed a blocked off road, which was near the golf course. Naturally, I could not help myself but drive down that way. The road had started to become overgrown with lush vegetation. We arrived at an amazing beach and I took my chance to get some more aerial shots! 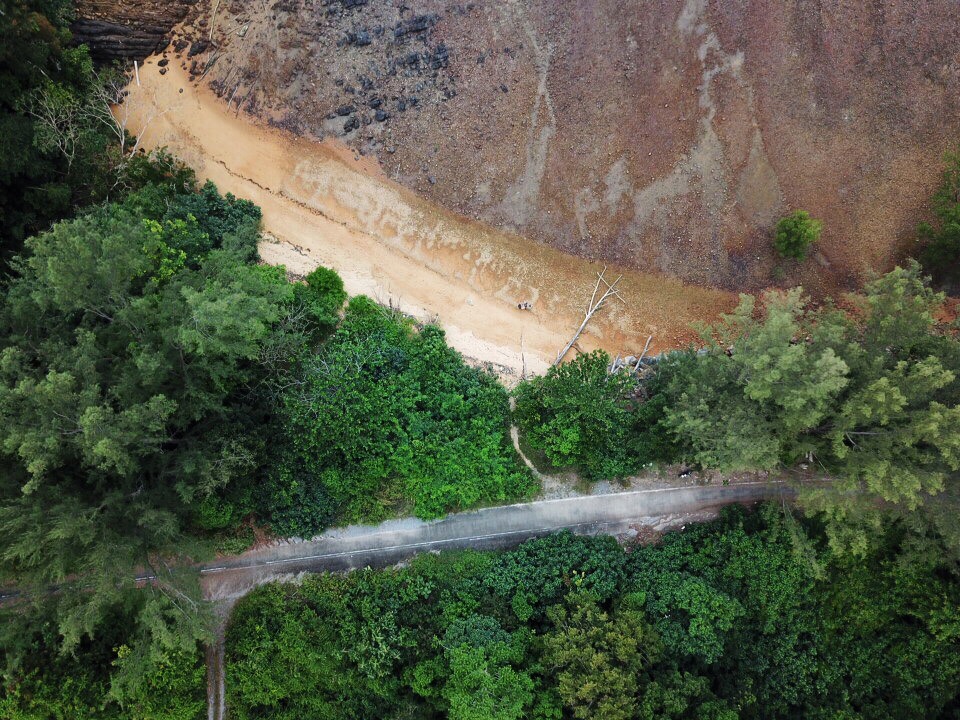 If you ever find yourself in Langkawi and are an adventurous outdoor person, then make sure you go and explore the northern side of the island.

Submit
$148.31
195 votes
40
Authors get paid when people like you upvote their post.If you enjoyed what you read here, create your account today and start earning FREE STEEM!
Sort Order:
[-]
geekgirl (71)  ·  2 years ago (edited)
Awesome post. Your writing skills are great, I was pulled into your adventure story as I was reading. Your photographs are amazing. Following for more. Hi. @geekgirl! Thanks for liking my story, there are many past and unfolding adventures to post! Stay tuned :)

What an amazing place.And you got some breath taking pictures to.Great stuff @pierrehugo

Wow this is such a beautiful post. I never heard of Langkawi but it looks so amazing. Thats forest was so cool and your camera took really nice pictures... I really like the monkeys 😁 You must be a pretty good drone flyer because alot of people crash theirs lol haha. What drone do you use? Btw I followed you because you seems really cool. Great work @pierrehugo

Hi @joordanzzz. Thanks for the compliments! I just taught myself to fly the dji mavic pro, which is quite user friendly and easy to learn. Being cautious is key I guess.. I have only crashed my drone once ;) haha

Very nice coverage of the Place.

A very beautiful journey by you with great photos. picturesque

Sky Bridge could have been a great adventure, but as you rightly said during the busy tourist season, you could be spending all the time in buying the tickets in long queue.

When next you feel like having a new look of nature, take a trip down to Nigeria. I bet you will want to repeat the trip or rather vacation.

Amazing pictures! How sweet the big monkey holding its baby on the tail like a leash :D

Hey welcome to my country! You have some good shots there especially the Dusky Leaf Monkeys!

What a beautiful post...very nice view

Congratulations @pierrehugo, this post is the second most rewarded post (based on pending payouts) in the last 12 hours written by a Dust account holder (accounts that hold between 0 and 0.01 Mega Vests). The total number of posts by Dust account holders during this period was 10902 and the total pending payments to posts in this category was $4339.01. To see the full list of highest paid posts across all accounts categories, click here.

Nature is so great , just look at the nice topography and beautiful monkeys

Ah it looks breathtaking!!! Would looove to go there 😍😍😍

Great place! The monkeys are so cute!

Loved the mix of drone and normal photography, what beautiful scenery and how cool to see it from all angles! The aerial view of the beach toward the end of the post is my favorite shot, it is almost a piece of abstract art :)

You can check out the previous week's Author Showcase to get an idea of what we are doing with these posts.

Hi Carl! Thanks for your comment, I greatly appreciate the feedback!

You can defitnely quote me by tagging me on my text and photos. :)

As for adding a statement, here it goes:

‘I am a passionate traveler and photographer constantly seeking the next adventure. Surfing, sailing, scuba diving, nature and hiking are amoung my favourate activities. What better adventures to combine photography and drone footage with?!

Langkawi was a starting point for helping out with a delivery of a 41ft sailing yacht. I had a few days to explore while waiting for the boat to be ready. After just under a month of sailing we finally got to the Island of Koh Chang, Thailand, where I am currently.

My mission is to travel Thailand and do a basic engineering course in the next month, after which I plan to travel further in SE Asia to sail, surf and explore. In 5 months time I am starting a new job on a 77ft sailing catamaran, to seek the best dive sites around the world.

It truly is a dream job and I can’t waot to share my adventures with everyone on Steemit! What a revolutionary platform to be part of. ‘

Thanks so much for the statement, it really makes my life easier when I am putting together the showcase posts :) I am looking forward to reading more about your adventures! Showcase post is up: https://steemit.com/curation/@curie/curie-author-showcase-february-8th-2018

Love the drone shots and the dusty leaf monkeys.

Dear @pierrehugo I see you like adventure and nature, that's fantastic consider that we live in a technological era where we can see all the places on our screen. If you ever consider to come and visit Serbia, here I wrote things that are worth to see. Enjoy :)) https://steemit.com/travel/@anjuska/introducing-serbia-to-steemit-serbiaweek-day-1-10-things-to-see-in-serbia

Very different angle of langkawi that i visited. Wonderful!thanks.

wow too good to travel soon <3

Oh wow, what incredible photos! Your shots are dope. Followed you and excited to see more of your adventures popping up on the steemosphere. :) @lilyraabe

Wow. Beautiful pictures, i was blow away. I had to googlge Langkawi and i learnt alot. i will be following you for more posts. Great job @pierrehugo

pierrehugo I am putting this place on my bucket list. Thank you!

Thanks for sharing your adventure. Looking forward to more posts.