Can you take a picture of me?

Can you take a picture of me?

A commonly asked question, definitely when you are traveling around. A question I ended up asking in Malta a few times. Normally it is presumed, that if you ask this question, you have a device that can take the pictures as well. If you don't have a device that can take semi-decent pictures on you anymore - for those unaware, I dropped my GoPro in the sea in Malta by accident, never to be found again - it makes for some interesting experiences.

When I was in a beautiful spot, I would ask other people to take pictures of me and mail them to me afterwards. This was quite a fun way of going about it actually. It always surprises me how helpful people tend to be if you just ask and explain the situation. In my case, that would mean telling them about my GoPro and that I was a blogger in need of some pictures! Some of these came out really well, and I would love to share them with you and tell you more about where they were taken and who took them. 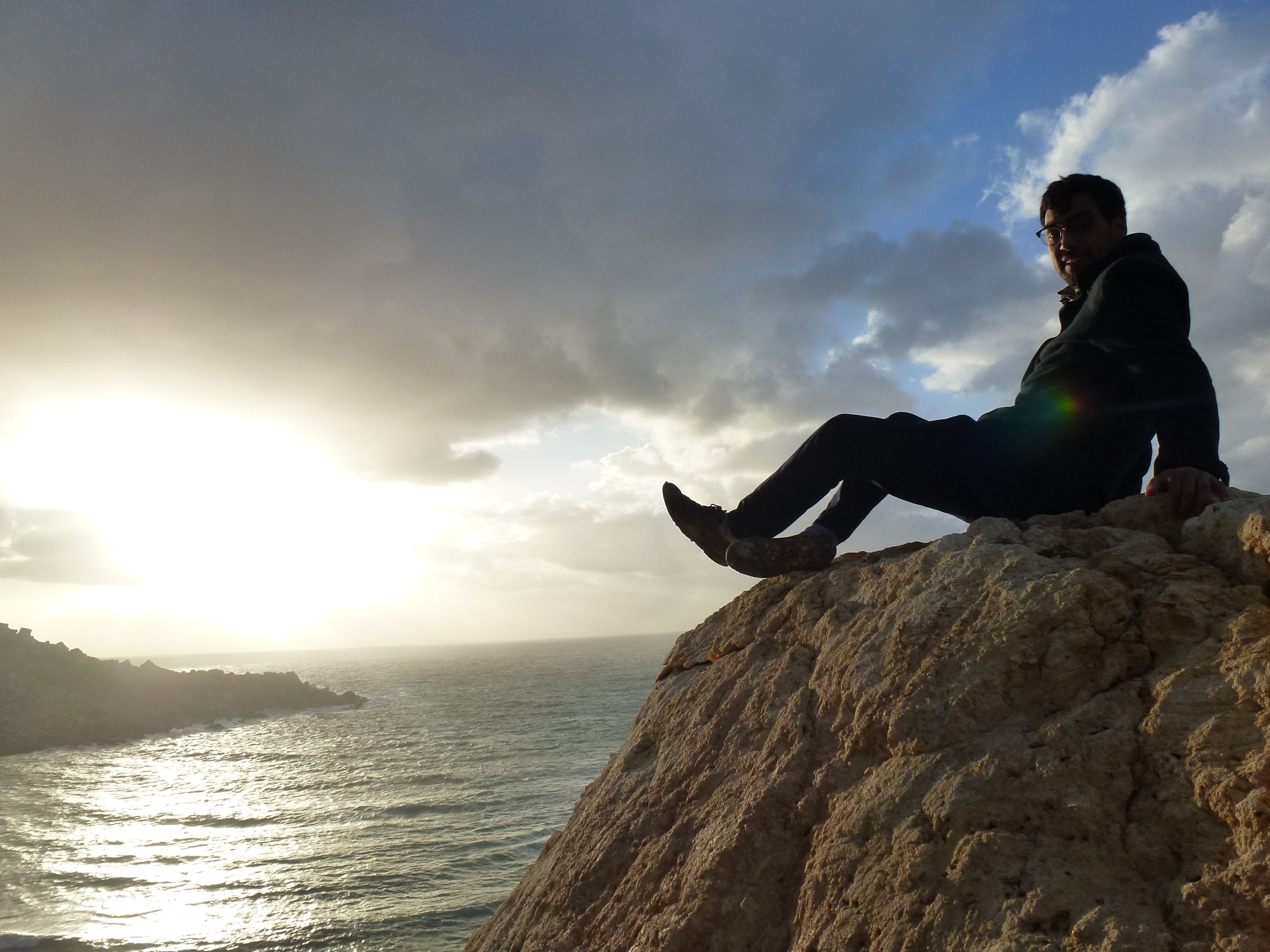 This will also be the place where I will tag this post on the Steemitworldmap. Whilst traveling through Malta, I was lucky enough to meet a few people living in Malta themselves, one of these people was Daphne. I had asked her before what she thought was a place I definitely had to visit. This was near the end of my trip - so I had already visited quite a few places - after thinking for a few moments, she said I definitely had to go to Ghajn Tuffieha. I hadn't even heard about the place, which is always a good thing!

After arriving we started hiking out a small, incredibly muddy, trail alongside the cliffs. It was windy, and cold, but the view was already spectacular. I decided to climb up as high as I could to really let the moment sink in completely. Right at that moment, this picture was taken. One of the better sunset views I have had the pleasure of witnessing!

Once the sun had set completely, and the cold started to set in - mostly because of the wind - we decided to look for a cave she knew of, and light a small fire to warm ourselves. Just sitting there, listening to some relaxing music is one of the better memories I have from my time in Malta. The story behind this picture actually starts in Mdina, about 6 km away. Mdina, is one of the oldest parts of Malta and the architecture of the so called silent city is beautiful. Not quite sure where I wanted to go next, I decided to just start walking. First through the neighboring city Rabat, when I suddenly found myself at the end of buildings and right into the countryside. My curiosity was peeked, and so I kept on walking and walking. It felt as if I just went back 50 years in time.

After walking for about an hour, the road suddenly goes up quite steeply, not sure what to expect, but hoping for a good view, I decide to start the small climb. And was I rewarded for it. When I arrived there was not a soul out there, so I just sat myself down at the Dingli Cliffs to take in the view. Slowly, the sun started setting and a few other people somehow found there way to this little patch of land. Among those people were two French travelers, Marie and Laurent. When I saw them taking pictures, I knew I had to ask if they could take a picture of me for my blog. After explaining the situation to them, they agreed and took this amazing shot.

It was incredibly windy at the top, so you really could feel the power of nature. Which I personally enjoy a lot! In this picture I am actually holding my glasses with my left hand to make sure they don't fly away and you can see how the wind is playing with my jacket as well! 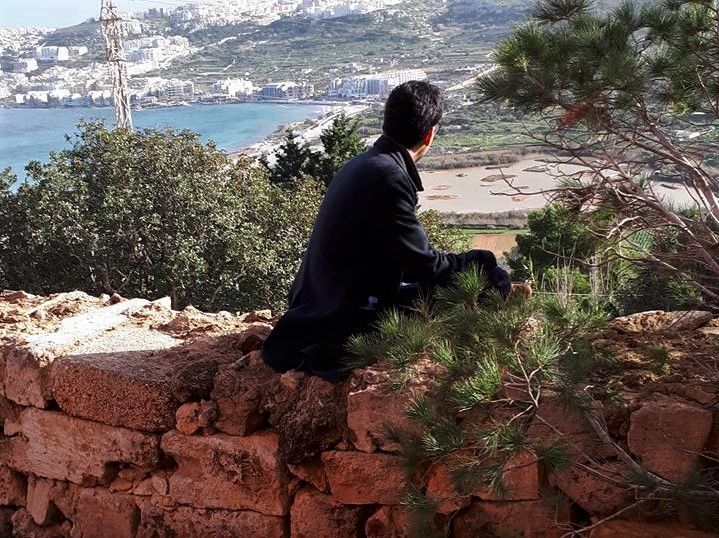 The story behind my trip to the Red Tower is quite funny as well. When I arrived with the ferry from Gozo, I had already noticed it. But at the time @gypsybird and I had decided not to go for it (we were both tired and it was getting darker and colder). Of course, the tower did stay in my mind after that, and I had already made up my mind to go check it out one of the upcoming days. Unfortunately @gypsybird had to fly home and I got caught up doing everything except for the Red Tower! Eventually though, the moment came for me to check it out! If you ever go to Malta, I highly suggest for you to hike up here. It's not very challenging, and the view is well worth it. From up here you can see the coastal line in every direction except for South.

This picture was taken by Virginie, a French lady I met at the hostel I was staying at (Inhawi Hostel). We kept running into each other, and so decided to do this little trip up to the Red Tower together. After taking a bus and hiking for about 45 minutes, exploring an abandoned house en route, we arrived at the tower - where we enjoyed the view. @gypsybird and I decided to go to Gozo this day, but this picture was taken in St. Julians. Which is where I have spend most of my time in Malta. I got lucky enough to find an amazing couchsurfer, Daniele, through @gypsybird there, and even after she had left, I could stay at his place! If you have read my last post, St. Julians is also the place where the Cuban Bistro is. It is a good area to hang around, and it is very easy to get to pretty much everywhere from here - than again that could be said about most places in Malta, seeing as the island is so small.

During this picture I actually still had the GoPro (it was my second day in Malta), but at the time my SD-card was completely full with all my footage from my last trip to Steemfest in Portugal. Wanting to video the beautiful scenery for you guys, I told @gypsybird we needed to make a stop so I could transfer my footage from my GoPro to my laptop.

Of course she couldn't resist taking this picture, which is actually a pretty good summary of my trip. I was working around half the day, whilst traveling the other half. This was my first trip in what you could call digital nomad fashion, so I still needed to get used to all its perks and limitations! I think I managed quite well, and would most definitely love to do it again sometime soon.

Find all my stories on my Steemitworldmap

These pictures are great.. I wonders how the environment will be live.. It will be really refreshing.. Thanks for posting this inspiring pictures.

Thank you, believe me, being there is sooo much better than just seeing the picture, haha!

You're welcome, glad you enjoyed them!

Wow fantatic places and such a wounderful stories

Cool story Martibis. Although can't you just photos on your phone?

Thanks Choo! And yes, I could have, but the problem is my phone takes pretty shit pictures (it's quite old, I need to upgrade at one point, haha)!

Have you not heard of something called selfies?

Well, you need to have a phone that can take decent selfies first though!

At least you got to meet new people by asking them to take the pictures of you :) And got to agree on the wind in Malta, it tends to get overwhelming, especially near the sea!

Yeah, was definitely quite the fun experience in the end!

True that, sometimes the wind gets really crazy! When I was there near St. Julians, the waves were huge, even the locals said that that wasn't normal. We saw some places next to the sea side got damaged as well!

Have you been to any of the places I mentioned up here?

Yikes, that sounds bad... We did see the waves get high but didn't know it was that bad...

We've been to Dingli Cliffs, ought to write a post about it :) And we only passed through St Julians, didn't actually spend any time there...

Yeah, was only for two days that it got that insane though!

Oh nice, yeah you should, give me some more nostalgia, haha!

Glad you got so many people to actually email you the pictures. I went on an amazing white water rafting trip in Costa Rica several years back...never got the pics. But, then again, I still owe some other people a couple pics from similar situations. And so it goes :)

Beautiful images from what I assume to be an amazing trip. Thanks for sharing!

Yeah, I did get most of the people their Facebook as well though! So that kind of helped, I'd say!

Oh, yeah, you always end up with missing pictures and pictures you were supposed to share with someone else after a trip, haha! I 100% feel you! Pity you missed the ones from rafting in Costa Rica!

I actually lived in Costa Rica for six months and went rafting there too, luckily for me I still have the pictures, haha! 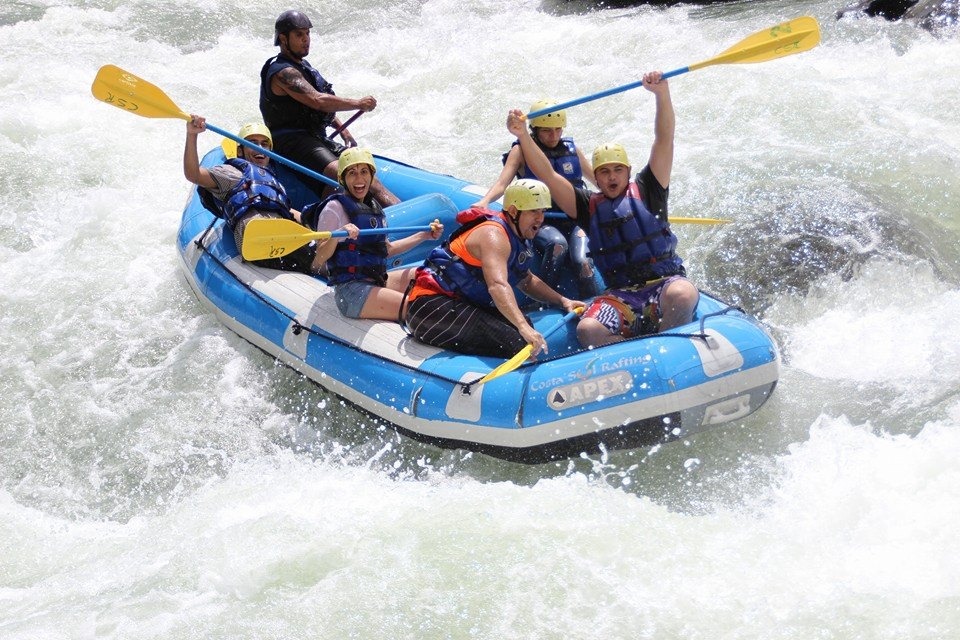 Thank you, I definitely had a good time!

Wow, didn't even think of the FB angle. Have to remember that in the future!

6 months in Costa Rica? Whereabouts? I traveled a lot of the country in the month I was there. Amazing place.

I had a small apartment in a little town called Grecia, more central! Yeah, same, and I still feel it had more to offer, seriously love that country!

too late for resteeming - and I feel for you losing your GoPro. A friend of mine flies drones with GoPro, sometimes he crashes, but so far, never lost or damages his camera.
The thing about asking strangers to take your photo reminded me of this funny prank: London Tourists stunned!
Too bad my upvote got you nada - I don't have very much power anyway ....... catch you next time!

Hey, great picture ! I upvoted you , and I will probably go on with upvoting!

Would you follow and upvote me too ! It does not cost you someting !