I had a chance to visit Meteor Crater, near old route 66 in Arizona recently. It is quite a wonder to stand upon the rim of the crater and see the whole thing at once. Nothing that a camera can quite capture. Nonetheless, I tried to take a few photos to share with you all.

The crater is the best-preserved meteor impact crater on our planet. It was formed roughly 50,000 years ago when a 45-meter wide meteor weighing about 300,000 tons came screaming into the atmosphere at 26,000 mph.

The impact had a force of 20 million tons of TNT and created a 1.2km wide pit with a depth of 550 feet. It took just 10 seconds for the whole crater to be created.

To visualize the size of the crater, picture 20 football fields on the crater floor with the crater walls turned into seating for 2 million people!

But in 1903, a man named Daniel Barringer told people that he thought the crater was formed by an impact of a large iron meteorite. Plenty of meteorite pieces were found strewn about the area, but to most people of the times it was merely a coincidence.

Barringer had become rich from investing in a silver mine and looked to become even more wealthy from mining this meteor that he believed lay beneath the crater. His estimate was that the mass that hit was in the 100 million ton range. At $125/ton for iron ore, that meant he was looking for $1 billion worth of iron in early 1900's dollars! If you remember, the actual size was around 300,000 tons, or just 0.3% of his estimate.

To get his hands on this payday he staked a claim for 640 acres, which included the crater and lands surrounding.

It was the start of 27 years of effort. He drilled multiple shafts down to 3km. But it was all in financial vain. It wasn't known at the time, but there is no large chunk of meteorite. It had been fragmented upon impact. About half was in small fragments beneath the crater, and half ejected all around the local area. The good news is that he ended up expanding the knowledge of meteor craters with his scientific observations. Later scientists would build upon his data.

In honor of him, the scientific community refers to Meteor Crater as Barringer Crater. Every year the Barringer Award is given to outstanding scientists in the field of crater studies.

Other Things of Interest 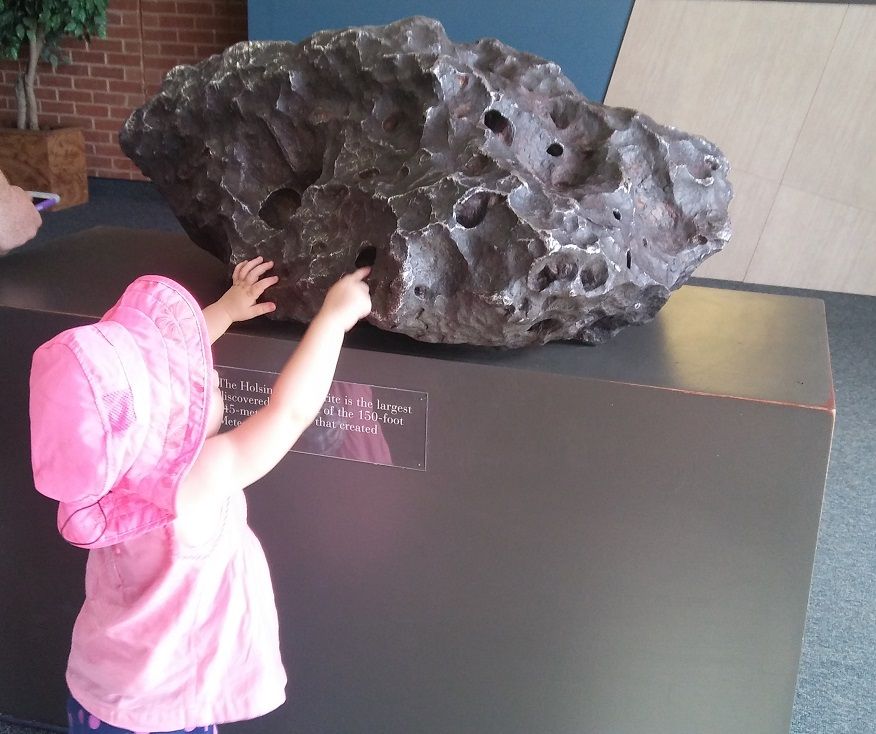 The largest piece is this Holsinger meteorite. You can touch it if you visit, as you can see my daughter doing. You can see more of Barringer's drill shafts covered up

Back in NASA's Apollo mission days, astronauts were trained on the crater floor. In remembrance, they left behind an astronaut cutout and flag down there. There is also an Apollo training capsule in the courtyard of the visitor center. 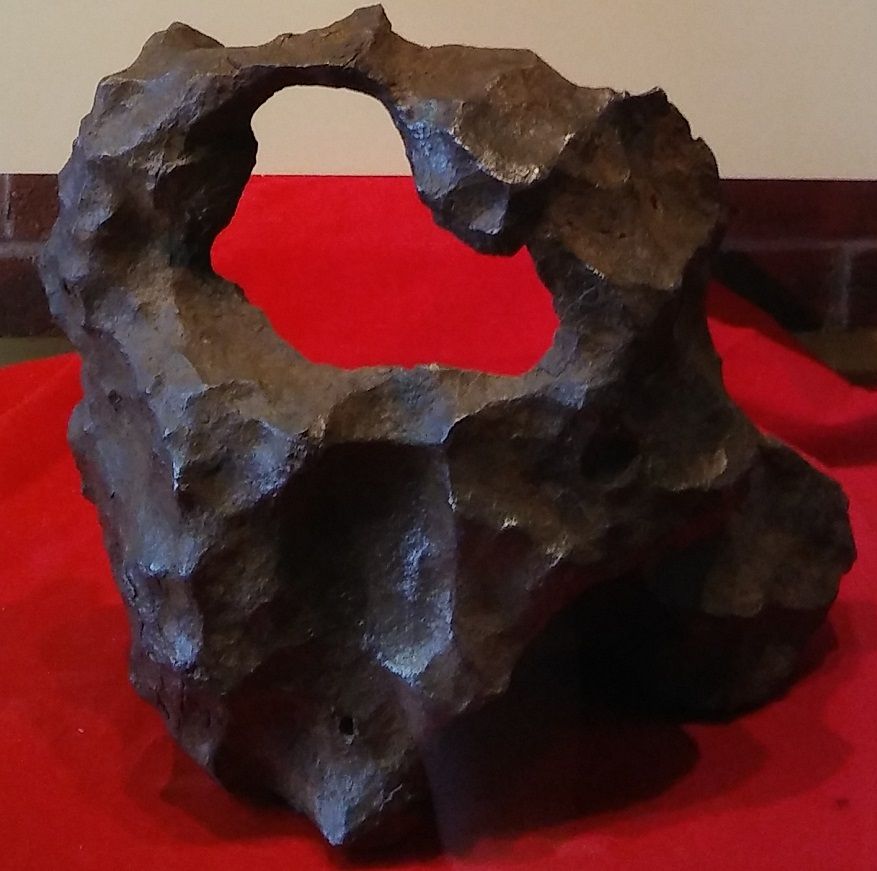 A piece of the meteor was shaped like a basket with a handle. It was discovered by a rancher in the 1940's and placed on display in the museum at the visitor's center. On August 12th, 1968 the piece was stolen!

It showed up again in an estate sale in Wisconsin in 2006. Buying the piece for its metal content, the purchaser used it as a counter-weight for his grandson's basketball backboard. One night he watched a TV show about meteorites and thought that what he had might just be one, so he took it to the Chicago Field Museum to be examined. It was recognized as a meteorite and the infamous basket meteorite stolen decades before! It was returned to the Meteor Crater museum in 2009.

Interestingly, the crater is still privately owned by the Barringer family by way of the Barringer Crater Company. If you are going to visit the hours are from 8 am to 5 pm and the entrance fee is $18 for adults and $9 for kids 6-17.

Wow, man! Some serious impact into the ground there! Smart thinking at the time by Mr. Barringer but a shame it never quite gave him the riches he was hoping for.

Phenomenal and insightful article as is the absolute norm with you, buddy. Fantastically written to boot. Your encyclopedic blog grows still. A wealth of information from the master himself. Loving it and look forward to way more from you, my good friend. :)

Thank you, buddy. True, while it didn't pay off for him back then it has created a 'gold mine' for his descendants today. :D

I visited this same site with my family when I was about 15. The size of it truly is hard to grasp. I remember going out onto the platform and looking across while holding the idea that a massive rock had fallen out of the sky to make this crater. It really was something special. I remember the museum being pretty cool too, even as a kid who wasnt interested in that kind of thing lol.

And I had no idea this was privately owned! Thats amazing. Is there a story behind it? Great post @getonthetrain! Upvoted and followed. Happy trails!

Haha, at $18 a pop it is certainly better than any gold mine!

Oh wow! Quite a big crater. While I enjoyed the post, I like the photo with your daughter the best. Children are so spontaneous and genuine. If the wish to touch something, they would without thinking twice and that's why they are so lovable.

True, and she loves to touch everything!

My son is the same.

This is a very interesting post and thanks for the photos. Amazing occurrence whenever it happened. It's good that Mr Barringer gave publicity to the crater and it's history and that an award was created in his name for science. As you tell it, it appears that all his efforts were not altruistic! Ce la Vie

Money is a great motivator! The seeking of profit will lead us into space in much the same way as colonists leaving Europe.

Nothing wrong with seeking profit. Unnecessary exploitation I don't like. Safe journey!

The fact that a 45 meter wide meteor can make a crater larger then 1.2 kilometers wide is pretty scary... I don't want to imagine one of these heading towards a city. If we follow the same kind of impact ratio but increase the meteor size to 1.2 kilometers that would make a crater with a width of 31 920meters. That would take out a huge city and then some, especially including the shock wave that would come from the blast.
Anyways, if we find out a meteor is heading for us atleast we know we have Bruce Willis who can save us ..

Haha, yeah! Get them oil drillers up there and nuke the bastards! lol

They say there is a meteor hit by something of this size about every 1,600 years. Often it hits the water though, as that is the majority of our planet's surface.

Haha 😂 I guess we don't really know how fragile of a world we live in. I wonder if it could possibly do more damage if hitting the water, considering the tsunami it would create ... I guess we better appreciate each day as it comes, and hope we won't have any meteor in our life time

Awesome report! That is crazy it would be like a stadium that would hold 2 million people. I have actually never been there myself.

Took a little last minute vacation to up in the mountains near Show Low.

We should do something together as we live in the same town.

Nice! I love that area. Greer, AZ is an interesting spot up close to there.

I have the same handle in the steemit.chat. You could hit me up there and we could chat. A most interesting post! I have always been fascinated by meteors and what effect effect they have had on the earth over the ages. The dinosaur killing meteor 65 million to the much more recent Tunguska meteor impact. I will upvote and follow.

Me too! I love learning about such things. :D

Did Barringer collect the smaller fragments of iron ore to cash in? Or did he only care about the mother lode?

The tour and museum didn't go into that sort of detail. I don't think that the small pieces he found would amount to enough to provide much money. But maybe he sold some to the tourists of the time as souvenirs?

@getonthetrain You know I need to UP Vote this post because you have been very kind to me fellow Arizonan since I have been on STEEMIT. Interesting Stuff and yes I still like Silver at these levels..........

Us desert dwellers love our metals!

I grew up there in Winslow! I've had the privilege of flying over myself a few times!

Well, I'm a standing on a corner
in Winslow, Arizona
and such a fine sight to see
It's a girl, my Lord, in a flatbed
Ford slowin' down to take a look at me

Nice! Must be a great thing to see from the air. :)

This is a very interesting post and thanks for the photos. Amazing occurrence whenever it happened. It's good that Mr Barringer gave publicity to the crater and it's history and that an award was created in his name for science///

While chances are low, it is possible. But yes, it would be total destruction.

Yow... Such an interesting post, 'loco' an other time, first thing that the man think seeing that is money.... It may make feel strange being inside the crater..

That crater is a beautiful reminder of how quickly things can change on this planet.

Thank you @ghasemkiani, quality content is my goal and I wish to see more of it here on Steemit as well.