On the way back from the Deer Park in Nara we stopped by an Owl Cafe. Japan has all sorts of animal cafe's, such as Owl's, Hedgehogs, Cats and more. The price was a bit steep ($1000 pp with a coffee) but when we come across something that is "only in Japan" we just have to do it. 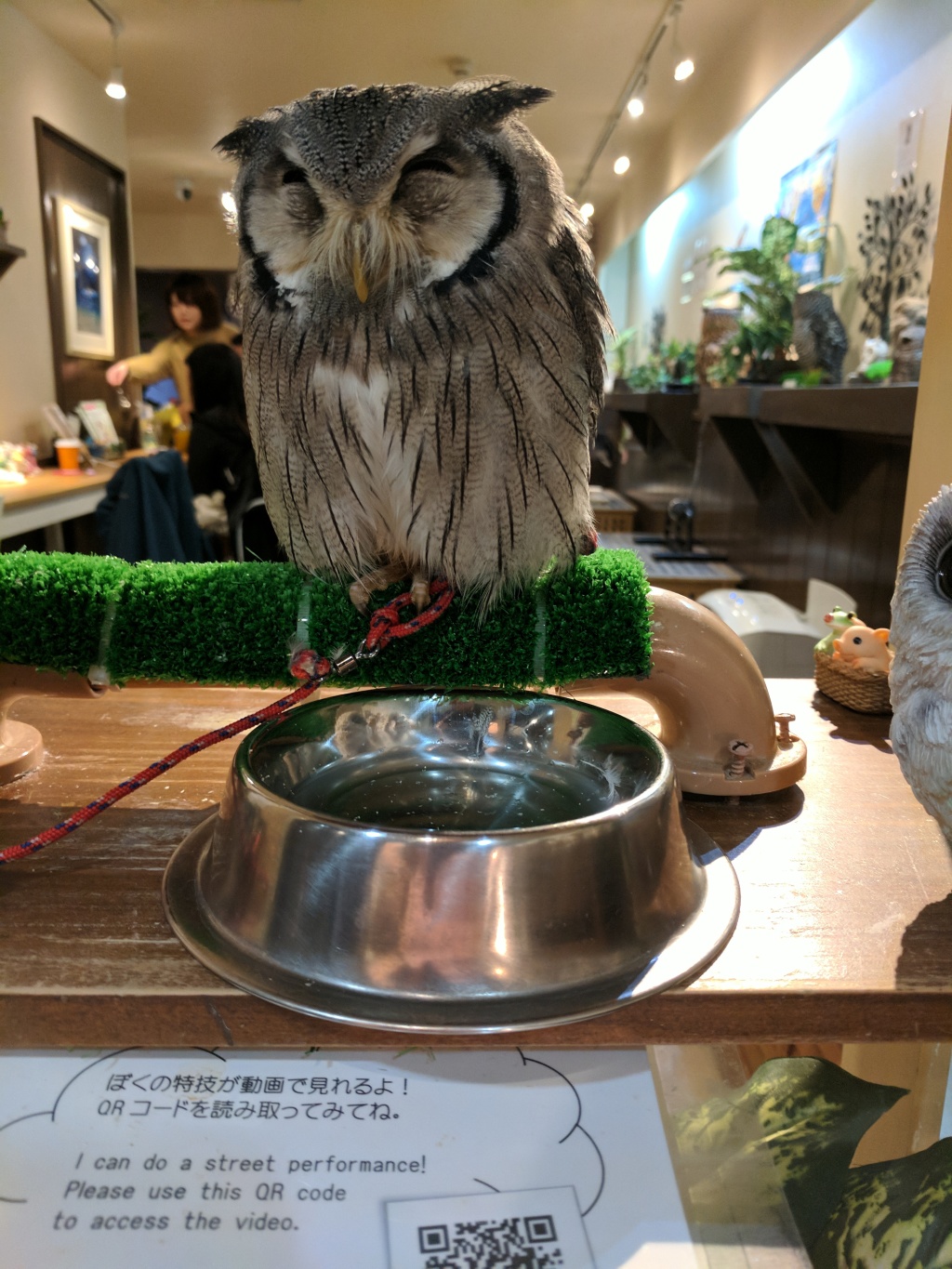 Note that there are many rules in an Owl cafe. The owls can become stressed or moody and Owls such as the snowy owl can become very uncomfortable when there are too many people as they are accustomed to low temperatures.

I have to apologise in advance as I have minimal knowledge of owls and I'm only able to identify the snowy owl breed. This is the snow owl here. He has his own spot away from the other owls and seems quite content with the head massage I give him. I was expecting him to to say O'Rly? at some point but it never happened :( 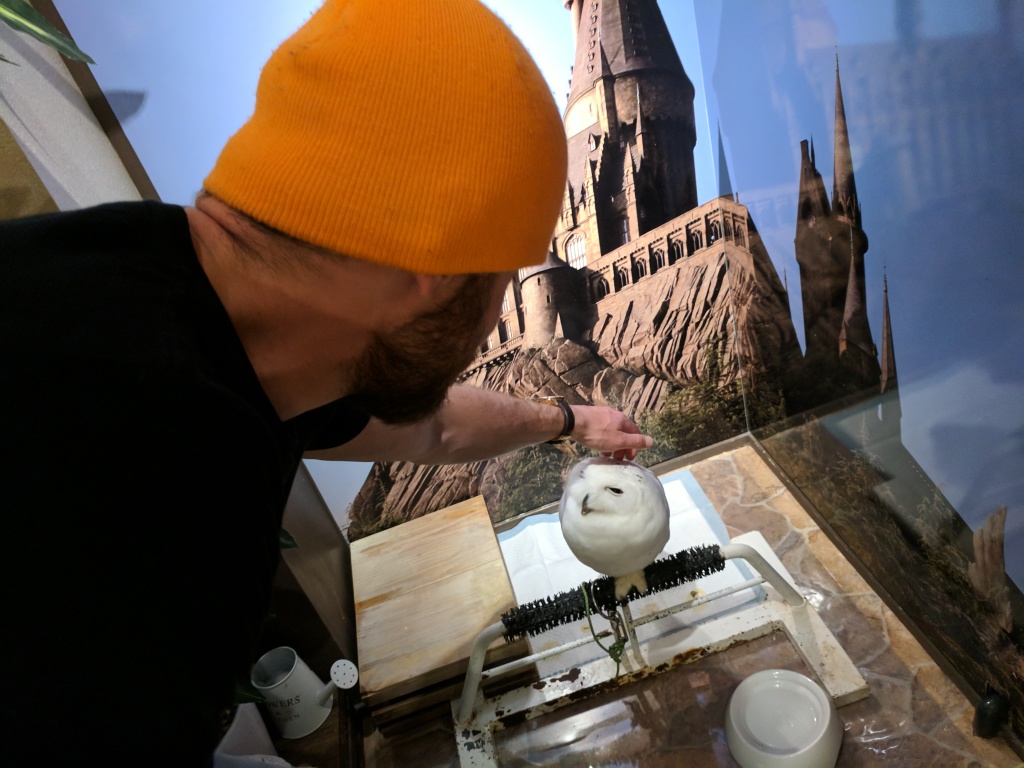 This was my favourite owl, had big bold eyes but was also very friendly. This guy had an attitude and we weren't allowed to pat, just feed a meat/fish mix. He bites pretty hard apparently. 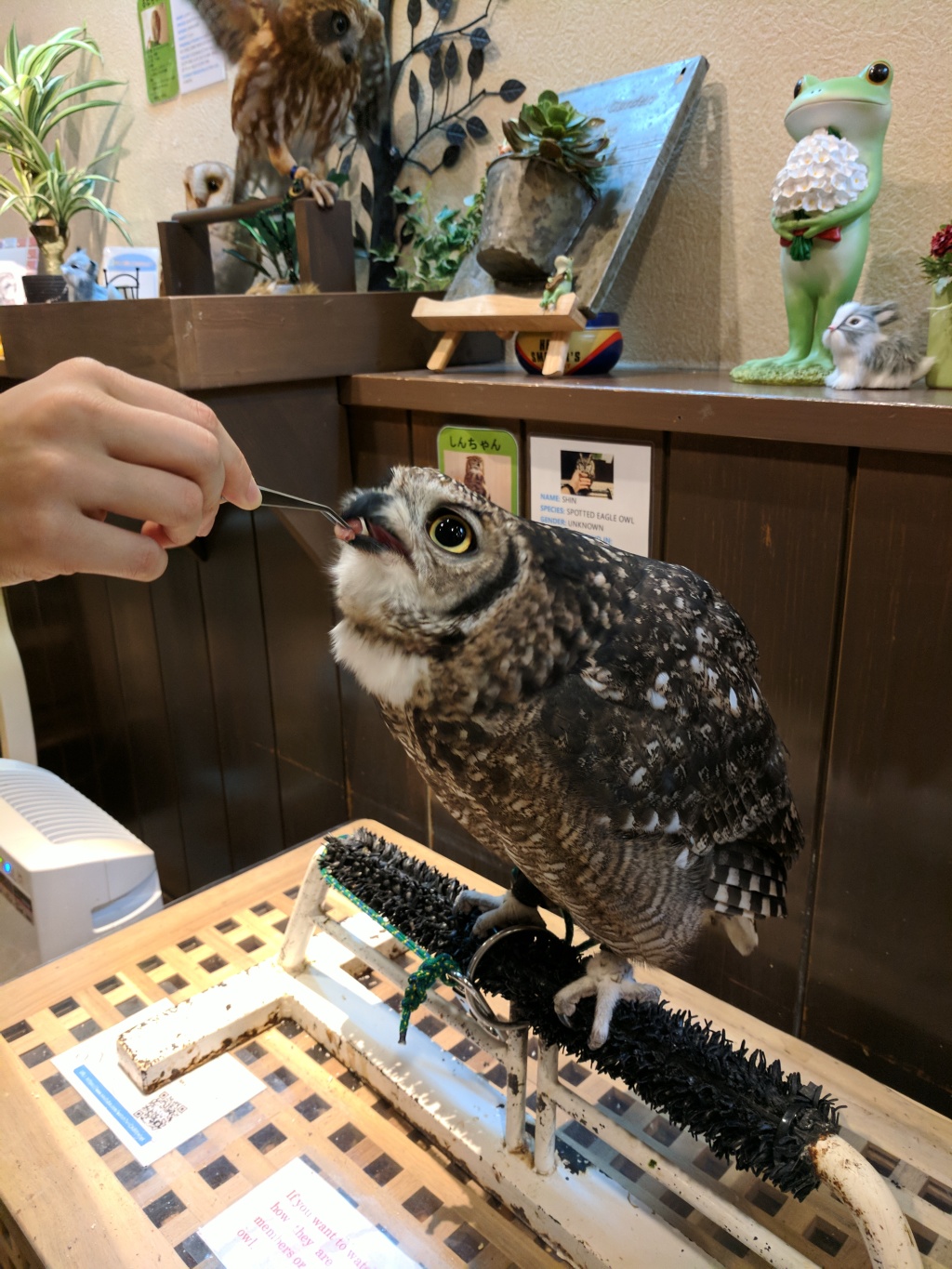 Then we have these two, it took me a while to realise that they were real owls, there are fake owls around the cafe and it can be very difficult to tell the difference. Finally I have heard people express their concerns that the treatment of the owls is inhumane. While this is possibly the case, I have no idea what the owls are thinking. They seemed quite happy being pampered with food and pats, with the exception of one at the end of this video, he liked to run about but was unable to.

In all I learned a lot about Owl behaviour. They probably do belong in the wild but they are also well treated at the Owl cafe's. If you have any thoughts on this please comment!

Everything in Japan is a bit unusual at first, at least for me!

They are so cute awesome bro

Incredible, an Owl cafe! You can ever learn something. Its really crazy! I have upvoted you and resteem.

GuyZ tell me how i getmore votes..am new here i dont know how get more votes on my posts :) plz tell thanks :)

Interesting visit thank you. I love hearing about Japan but can't understand some of their culture. I watch NHK World TV chanel, which is frankly a tourist showcase with lots of culture, but it is good. I also love owls but question the wisdom of keeping such a wild animal in enclosed circumstances where they are allowed to be petted by humans. I can imagine your delight in being able to do so, I'd love it, but would this happen in a zoo? It's a question I would ask myself. Happy travelling.

This post has received a 10.74 % upvote from @booster thanks to: @adventurerider.

Congratulations @adventurerider! You have completed some achievement on Steemit and have been rewarded with new badge(s) : img credz: pixabay.com
Nice, you got a 13.0% @minnowbooster upgoat, thanks to @adventurerider
It consists of $20.62 vote and $0.47 curation
Want a boost? Minnowbooster's got your back!

The @OriginalWorks bot has determined this post by @adventurerider to be original material and upvoted(1.5%) it!

Congratulations @adventurerider, this post is the sixth most rewarded post (based on pending payouts) in the last 12 hours written by a User account holder (accounts that hold between 0.1 and 1.0 Mega Vests). The total number of posts by User account holders during this period was 2443 and the total pending payments to posts in this category was $2303.38. To see the full list of highest paid posts across all accounts categories, click here.

They are beautiful birds. thanks for posting.

Lol sorry that was meant to be in Japanese Yen. About 8-10 us dollars I think.

ah , lol i understand, indeed steep price, but for something special like that, more than worth it, lovely pictures !! was the coffee ok? Wow, incredible! The claws and the beak on the moody one makes one think twice. The golden ones look like plush toys! Did they make noises or just sit quietly?