Ten Facts and One Lie - The revelation

This is the recap post of the Ten Facts and One Lie challenge.
I´m sorry to say that NO ONE guessed the lie correctly!

(1). I am a single child and my dad was kinda absent during most of my childhood. When I was very little, I was bullied heavily because of my lack of socialization skills(at the time) and my high intelligence. When grew up and I learned to defend myself, my parents had to keep changing me from school to school because I kept getting into fights and injuring people. Some of them got injured badly at that time due to my uncontrolled rage.

True. It took me several years of martial arts training and patience to learn how not to become the bully myself...

(2). I´ve had several mental disorders throughout my life, and I learned how to cure some of them, suppress others, and live with the rest. On the surface I appear normal, but I´ve experienced severe bipolarity, paranoia, OCD, sonambulism, insomnia, panic attacks, suicidal tendencies, hypochondria, anxiety attacks. I had to learn emotional intelligence from scratch, because I had almost none of it. Exceptuating insomnia, I presently have none of those disorders, and I´m at the happiest stage in my life.

True, that´s where my love for psychology comes from. I´ve read so many books and practiced so many mind excercises that at one time in my life I was seriously considering becoming a shrink. My love for technology and my hate for repetition prevailed though.

(3). In adolescence, I used to hang with the bad crowd, the ones who stole stuff. Looking back, I think I just wanted adventure and to escape my own mind. I learned about Karma in a bad way. Most of my "friends" of that time are either dead or in prison, including my best friend who died from a cocaine overdose. Soon after my best friend died, I realized it was time to turn my whole life around and started a spiritual path who took me years, and I emerged when I was about 22 years old as a totally different person who wouldn´t be recognized by his earlier self.

Sadly, true. Lessons learned from when I was a lost kid.

(4). I´m more of an introverted person, however, I´m very bold when the situation calls for it, or when its fun to be. I´m comfortable in almost any social setting and amongst any social class. But vulnerability is very hard for me so I may take years to tell my life story to a new acquaintance, and I do it in tiny drops.

(5). I´m very intelligent. I said my first word at only 4 months old and learned to speak whole phrases before I was a year old. I entered kindergarden knowing how to add, substract, multiply and divide. I entered school knowing the basics of how a nuclear reactor works, and I got so bored at school that I was extremely lazy when doing homework or writing my papers. I left school(unfinished) at 16 years old, however, I never had any trouble finding work because of my intelligence, people just wanted me on their team. Today I am self taught and can learn any skill with only a few hours of study(mental skill, I still can´t dance though).

Proudly, true. I even freak our myself, because several times happened to me that I´m able to diagnose flaws in complex machinery that I don´t even know how to operate. For example, without being a mechanic or even know about it, I can tell what´s wrong with a car most of the time. I imagined how the turbojet plane engine worked just before I went to wikipedia and confirmed that it worked just the way I imagined. I can read any science text and understand it perfectly, even if I have to google up the terms that are not familiar to me.

(6). Knowing that I can do better than most people with very little effort, I have grown to become narcissistic, hedonistic, bullheaded, lazy and exceptionally un-manageable(that´s why I work alone). But I´m working on myself every day to change that. I became a hardcore gamer to challenge my lazyness and became one of the top 10% of people in the world at my favorite game(Warthunder). I am permanently working on new challenges at work to keep me entretained and I always seek to surround myself with people who are better than me in what I want to do. And I´m being more open to working in groups to challenge my bullheadedness.

True, the dark part of knowing you have it easy: you get overconfident and lazy.

(7). I have had some extraordinary experiences. I have memory of some of my past lives, so reincarnation is a hard fact for me. Also, on a dark night while on a camping trip with some friends, we all saw an actual alien standing just 3 meters in front of me. It wasn´t just a glimpse, we saw him(or her-it was grey and small with a giant head with super big eyes with no sclera, it was naked and had no visible sexual organs). We sensed more of them around us hiding in the bushes, and we panicked and ran away. We almost never talk of that night with people who weren´t there.

True(Surprisingly for some). @snowpea, you guessed WRONG(that´s right, in red marker - even if steemit can´t show colors).In fact, my experiences with the world of the extraordinary humbled me and made me spiritual in many ways(just not religious). And seeing alien life with my own eyes(and 2 more friends), made me realize we are nearer to the cavemen than to the stars. However, feel free to not believe me.

(8). Having grown in a disfunctional family myself and being as cynical as I am, I also am VERY distrustful of big organized systems, like corporations or the government. Even though I have worked unofficially for some big IT companies as consultant(since I don´t have a title but I have the skillz), and I am currently working independently as a sysadmin/netadmin with some clients of my own. I have grown bored of my job and am currently looking for bigger challenges, but will never sell off by working in a multi national company(besides being not interested in it, they wouldn´t officially hire me with my lack of formal titles and my rebel spirit). So the crypto space feels like home to me.

(9). With my past girlfriends I have been very sexual, but at the same time very sentimentally reserved. That lead to very good sex, but dead end relationships with no depth. I have been also very unflexible about changing my lifestyle and very egoistic in my decisions. I have no kids despite being almost 40 years old because income is very important to me and I haven´t even started reaching the income level with which I would feel comfortable with. Like most people, I secretly crave connection with a partner, but I´m more than willing to throw that away in an egoistic way to try to become a Millionaire, since I come from a broken family and don´t quite believe in love. That is why I go back and forth between stages of solitude and meaningless relations without compromise. I have deep bonds with my inner circle friends, for some of them I would even die, just don´t tell them that, and I feel more close to them than with my own family.

(10). I´m agoraphopic and have never left the country. Sometimes I have a hard time even leaving my room. I have been commited on a mental institution but I never learned to fully cope with this. Sometimes when I´m on the subway I have an anxiety attack so big that I just have to get off, so I stay there, hugging the window and breathing at it, to remind me that there is air and freedom just outside it.

THIS IS THE LIE. I´m not agoraphobic(which means fear of the outdoors and open spaces), I love to be outdoor. And I´m actually more at ease in a crowd than most so I actually like to take subways, trains and buses. Knowing psychological profiles myself, I just made up a lie that would fit my profile just as a fun way to throw people off track. Furthermore, I don´t have any phobia left, I took care of them during my adolescense.

I should've known you weren't agoraphobic! So you really saw aliens! That is quite unbelievable, but I believe you. ;) Thanks for doing the challenge and sharing so openly about yourself!

Well, I basically turned into this guy: 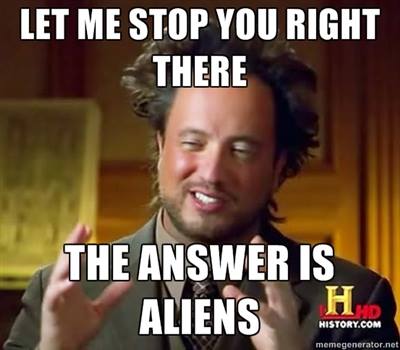