My wife seems to be a little unbalanced 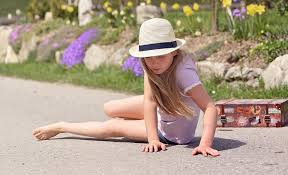 My wife seems to be a little unbalanced.

She falls a lot and that means literally not figuratively!

Her first memory of a falling was when she was a teenager walking out of a grocery store with a bag in each hand and she slipped and landed on her bottom with her legs spread in front of her. The worst of all is that this happened while she was in high school and she fell right in front of a boy she had a “crush” on. This however proved in retrospect that he was not worth her time, because he did not rush to help her. She does not remember too many related incidents while growing up, but she has subsequently had enough falls to make up for a life time. We dare not laugh, or her red hair will ignite! However, after some time, we all get to have a giggle together.

Some real whoppers that form part of the family legends......

My daughters have all played the piano throughout their school careers. We dutifully go and support them at the annual eisteddfod music festival. Now you must understand that you dare not talk nor walk out during a session. After we watched my youngest daughter play, my eldest and I wanted to leave before the session concluded. We kept whispering to Michele that we should leave. She was getting irritated with our constant harping but she eventually agreed. During the break between recitals, we decided to sneak out. I led the way between the wall and the chairs rather than use the main isle. All went well until Michele passed the last row of chairs. Her foot hooked in a chair that a gentleman had moved slightly out. Well, you can imagine. She went down like a 200 year old oak tree. As she hit the floor, the contents of her bag tipped all over the floor in a loud rattle. The entire hall of people turned and simultaneously let out a loud gasp! Well, Michele was up as fast as she fell, frantically gathered all her tumbled out goods and then rushed out. When out, she burst into tears. She was unable to walk without limping and was covered in bruises for the following week. [one of the girls doing their thing - practicing!]

Another occasion was after we fetched Michele from work. We decided to go the local shopping centre. We then parked in the underground parking. All six of us had to cram in our little Toyota Tazz as well as all the school bags. So you might be able to imagine the chaos of us all attempting to disembark at the same time. As we were busy falling out of the car, a man in a huge bakkie decided to park right next to us and he was impatiently waiting for us to close our car doors. This was despite the fact that there were countless other available parking spaces. Well, this infuriated my wife, and so she walked into the shopping area with purpose. As she was about to enter the flat escalator, she slipped on some dropped flower petals, did a ninety degree swivel with her right leg and crashed forward landing on the moving elevator. She jumped up like a jack in the box. By now we were all behind her and a hoard of people ahead of her who had all witnessed the incident, and looked at her with embarrassed sympathy. She whispered..... “give me the key”, “GIVE ME THE KEY” repeatedly. Because I did not hear her I didn't give her the keys immediately. She got more and more desperate. I eventually gave her the keys but she had to stand there and wait for the escalator to get to the top before she could get off. Then she had to endure an equally slow, painful ride back down so that she could go sit in the car and cry. 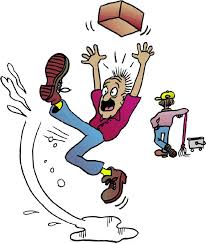 [a fair representation of the "move" at the mall]

We think that perhaps when she gets angry, she loses focus and falls. Once she was angry with the entire household. When she walked from one room into another (these rooms are separated by a couple of steps), she slipped on a piece of paper that one of the girls had left on the bottom step which she never saw. She landed on her backside which hit the step. We all heard the fall and ensuing wail. We all rushed to assist her. In the meantime she spontaneously devised a plan to make us all feel bad and she pretended that she had hurt her back. Everybody pampered her and behaved themselves for the remainder of the evening. The next day however, she had to admit that it was her backside that she had landed on and not her back, when the evidence of huge black bruise formed across the entire one side. She was prepared show any family member or even the ladies at her work, her bruise, to see what ghastly injury her disobedient family had caused her.

Concert time at her school and she fell once a week over a three week period:

On the outside steps going into the school building. It was raining and she had just told one of the girls to be careful not to slip, when her feet slipped out from under her and she found herself on the ground.

A week later, she was carrying pizzas and was walking down a slope where an old lady had slipped a few years earlier. Just as she remembered this, she thought about being extra careful but her new shoes lost their grip from under her and down she went. But remarkably she kept the pizzas for the children safe with a superb balancing act that would have made any waiter proud. She got up and limped the whole evening. When she could eventually go home that evening, it was at about nine pm. She had phoned home to tell us what had happened. We had been instructed to have a hot bubbly bath waiting for her.

The worst though, was the final accident in the “last” week when again she was rushing and going down steps at school. Her bell bottom trousers somehow flapped and “tripped her”. Down she went, again. She described it as her feet doing “koeksister moves” without any control and she followed after her flailing limbs. So she gathered her shoes and papers and hobbled back to the office. She almost fainted with the pain in her foot. Luckily a colleague helped her to her desk and got ice for her injured food. Everybody then left school early. She stayed at work for the rest of the day. Afterwards she bandaged her foot and hobbled to the car. She retells that as she pushed the pedals of the car, her language turned the air blue. She walked around like that for a week before going to the doctor. It was discovered that the injury was in fact quite serious. She had to have her foot in a moon boot and use crutches for another six weeks. She also had to go to physiotherapy to help the foot regain its flexibility.

Whenever she falls she blames the shoes or the trousers she was wearing, then she throws the offending clothing or shoes away. 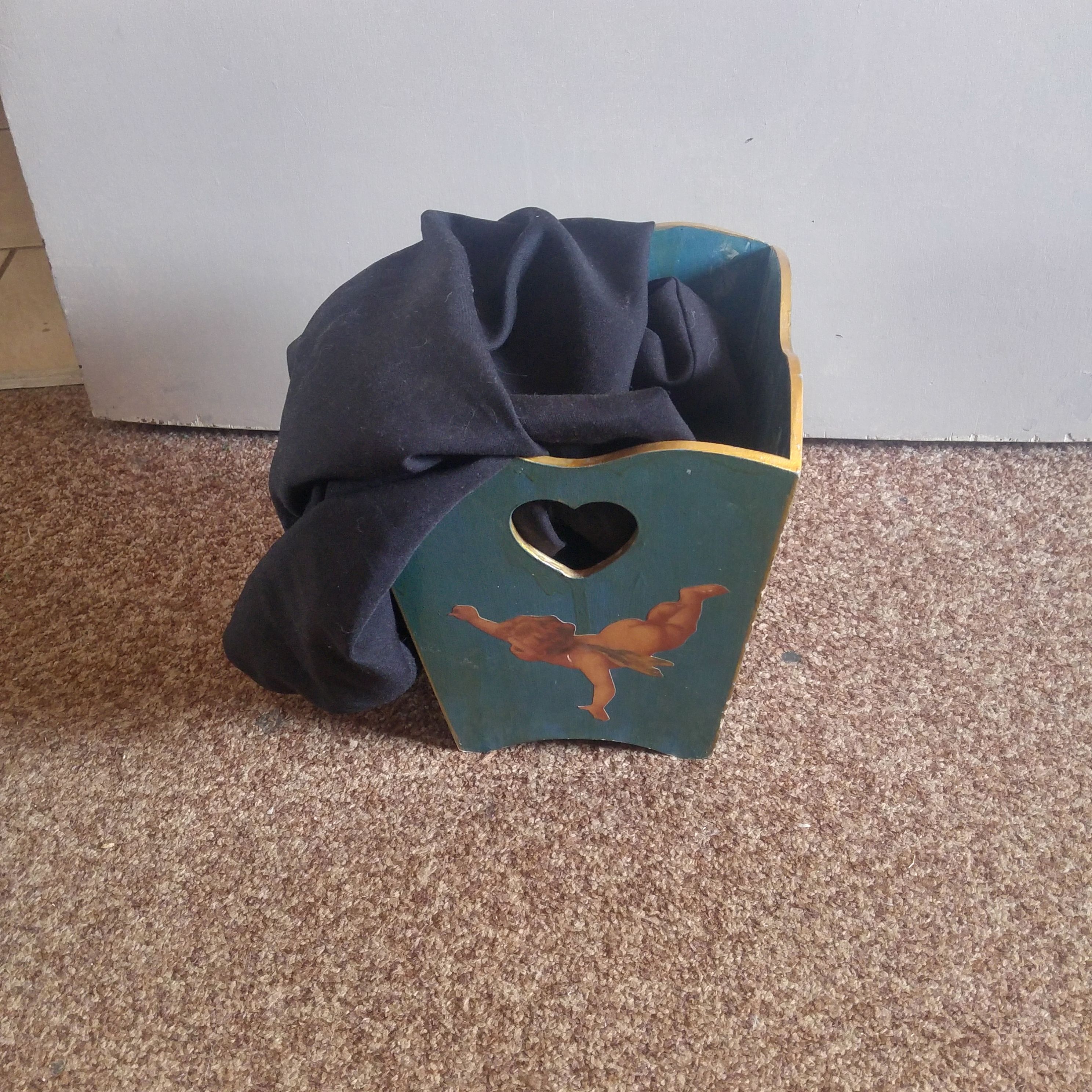 [the fate of uncooperative clothing]

If you see a women with red hair “hitting the deck”, approach with caution to help her, but whatever you do, DO NOT LAUGH.

@fred703 hmmm...your last warning not to laugh is making me hold myself with great strength...but i must let out this laugh chocking me and hope your lovely wife does not get to know! you are awesome...beautifully narrative a hitherto serious and sad events to make us laugh heartily... well, i hope she does not pass the falling technique to the girls... cos if she does, then you will be the odd guy out! great post worthy of my support and following for more....

lol! your wife seems to be a much unbalanced.

Same with mine. hahahaha

Nothing worse than falling over in public. Even when people come to your aid the embarrassment is still heart wrenching. I speak from personal experience.
I fully support your wife's need to go and have a cry in private and damn all offending clothing and footwear to the bin.

I remembered as a kid in Scotland been out with your grandparents and whenever you tripped over your own feet and fell flat like a pancake on your face. Then one of your grandparents would rush over, brush the wee stone pebbles off the palm of your hands and then kiss your hands better!

I understand that laughing could be bad for your health... BUT what happens when she finds out you compared her to a "... 200 year old oak tree"?

Same as my gf. what is it with women and balance?

Is it a matter of unbalance lol.

Tell your wife she is an Angel, she just keeps on getting her wings mixed up with her feet as she floats.

Ok, here's what you need to do... have you seen the movie or heard of the story of bubble boy? Get your wife a giant bubble to live in... it's the right thing to do. 😂

Very interesting post, but, aren't you going to be in trouble with your wife for writing it?

A neurological test will help you understand what is going on. She might have a medical problem getting worse every year

I think many of them like that @fred703 haha