Thank goodness the deadline was extended. I was so disappointed when I realised I couldn't meet the deadline for this contest...now I can participate! This is my entry for the #TeamGirlPowa Women's history Month Contest. I would be writing on a non-fiction piece on a unique woman in history, Queen Amina of Zaria.

Women are unique creatures often relegated to the background in the society. A woman's place is said to be in the kitchen. The care of the home is assumed to be the responsibility of a woman so that it seems ridiculous when a woman comes up with the idea that she wants to be involved in the politics of the community she lives in...she is told to mind her tongue and see to her husband and children...this was in ancient times and even now in some societies.

Women are meant to be wives and mothers, they are not expected to have ambitions to be anything better than this. As they have been raised by their mothers and grandmothers to be typical women, they raise their daughters to be the same, preventing them from pursuing what is understood to be male pursuits.

A few women are described in history as heroines of their people due to the feats they achieved. These are not normal women, I prefer to call them radical women. They are described as fearless and courageous. I was playing with a few ideas for this contest but this lady wants me to tell her story.

Similar to her story is the movie heroine, Xena, the warrior princess. This movie was my favourite growing up, I didn't miss any episode then. Xena was a heroine to the people even though she had a terrible past but she sure atoned for them later in the movie. But the striking point is that Xena was an extraordinary woman, feared and respected for her strength, courage, wisdom as well as kindness.

Enough of my ramblings, let us get down to business. I present to you the history of Queen Aminat of ancient Zaria.

Queen Amina is said to have lived in the sixteenth century, though some argue its the fifteenth century. She was born to Queen Bakwa of Turunku in the year 1533 in the city of Zazzua known today as Zaria in North Central Nigeria. The name Amina in Arabic means truthful and trustworthy.

Her family was well known for their wealth gotten from the sale of salt, kola, leather goods, cloths, horses and imported metals.

Children in Hausaland at this time are usually weaned at the age of two and Aminat was no different. She was weaned by her grandfather's favourite wife, Marka. She was said to spend most of her time as soon as she began crawling in her grandfather's court instead of her mother as most normal girls do.

She was known to train at a young age with the warriors of the Zazzau military. She was also said to attend state meetings on the laps of her grandfather, the king. She came to master the art of dealing with people from her frequent visits to the court. This way she came to fully understand the operations of government.

Her mother was made the new Sarki after the death of the Kawanissa in 1535. This event kickstarted Amina's political career. At age16, she was appointed as heir apparent(Magajiya) as she was entitled to an office as the firstborn of the ruler, joining the rank of senior officials like the Galadima, Madaki, Wambai and others to mention a few.

Amina at this time had suitors seeking her hand in marriage, not only men in Zazzau but from far places even from Kano. Sarkin Kano Kama Mash according to history sent one hundred slaves as a marriage gift but she refused his proposal.

Amina could not put her military skills to test during the reign of her mother as Bakwa.The Sarauniya was peace loving and not in the least bit interested in warfare.

At the time of her death, Queen Bakwa was succeeded by her younger brother, Karama who according to history was a lover of warfare as opposed to Queen Bakwa who was a peace lover. He made leading warriors train in the art of warfare. Weapons that had been gathering dust over the years were put to use once again. Amina was said to surpass her contemporaries, both male and female in the art of warfare. She was the leading warrior in all of Zazzau.

There was therefore little doubt on who to take over the throne when Sarki Karama died after a ten-year reign in the year 1576. There was said to be general celebration at her coronation showing people's approval of the kingmakers' choice.

She was said to declare an end to a period of slumber when giving a speech at her coronation.

A few months after her ascension to the throne, she led her people to war. She waged war in hausaland and conquered. Men of Kano and Katrina brought her tributes.The king of Nupe was said to have sent her a tribute of forty eunuchs and ten thousand kolanuts which was unheard of in the whole of hausaland. 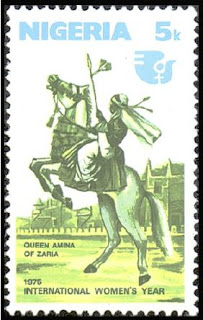 A stamp of Queen Amina.
source

Queen Aminat waged war till the end of her reign, till her death. For 34 years, she ruled hausaland with an iron hand, Zazzau was the greatest kingdom in history at that time.

Queen Amina was said to have had no husband or children. She refused to marry as she was afraid of losing her power. She however took lovers from her prisoners gotten during battle. To keep her reputation as a fierce woman intact, she had them murdered or castrated the morning after to stop the spread of rumour of her sexual life.

Metal armour as well as metal helmets and chain mail was introduced to the ancient Zaria army by Queen Amina, her people were known to be very good in metal work. Her kingdom's wealth and power was increased by influx of gold, slaves and new crops. She was said to have introduced the cultivation of Kolanuts in Zaria.

Ganuwar Amina(Amina's walls) were known as walled encampments she built during her travels. She built these walls to fortify her military camps. A few of them can still be found today in Northern Nigeria. The wall built around Zaria was named after her.

History has it that Queen Amina died during a military campaign at Atagara, a town now called Idah. That was the end of her reign but she is not forgotten in the history of Nigeria as no female warrior was like her.

She is indeed our very own warrior princess or in this case,queen, just like Xena is! Zaria is a popular town in Kaduna state in North central Nigeria known for its historical value and is home to the prestigious Ahmadu Bello University.

Queen Amina represents women at the ultimate, a true spirit of womanhood. A strong woman fearless in the face of danger and challenges. She is likened to other other female heroines like Moremi of Ife just to cite an example.

Queen Amina's story is a lesson to women everywhere. Women are to be proactive anywhere they find themselves. Let us raise our daughters to be different from what the society expects them to be...being typical women.

My dears, this is the end of the history lesson. I hope the journey to ancient Hausaland was pleasant, not in the least bit boring.

Hello, thanks for entering the #teamgirlpowa Women's History Month contest!

Your entry is under the required word count, however. The deadline is tomorrow night, so you have some time to edit it and add more if you choose! Otherwise, we will not be considering your entry for the prize.