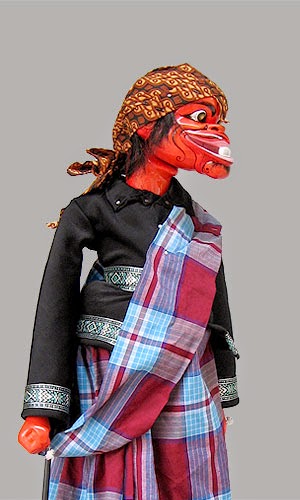 "One day Cepot wanted to go to town, before he left Cepot to say his father, when he wanted to say goodbye Cepot, his father said" Nak before you go to town, father want to leave message "
"If Cepot sees a yellow object, the name of the object is Stum (a grinding machine)"
"If Cepot sees the Black food, that food is Dodol's sweet taste"
"If Cepot saw a white item, it was called Cigarettes.
That is his message to the Cepot, Next the Cepot went to the City, while on the way the Cepot saw the river as he was standing on the bridge, when looking into the river the Cepot see the yellow objects.
"Oh that thing called Stum" said Si Cepot "
Release It Not Stum saddle CHAPTER, wkwkwkwk,

Si Cepot also experienced his journey, was walking Si Cepot saw a merchant who was selling Charcoal, the Cepot also saw the merchant.

The Merchant was a little scared and what can make the sale of charcoal to the Cepot.
The Cepot also bought the charcoal who would have thought eating dodol, then he ate the charcoal.

"Why dodol his hard amet" he wondered, while his teeth all black.
"Well ga bener nih the father love to know his information" said the Cepot while irritated.

Si Cepot turns his journey, while on the way the Cepot saw a white object, and then approached the object.

Finally the Cepot buys firecrackers that he thought were cigarettes.
When you turn on DUARRRRRRRRRRR explode, wkwkwk stupid yanh si Cepot.
As a result Cepot teeth 3 more live, while the want to dislodge.

Because one of his teeth would be dislodged, he went to the dentist.
Her teeth were in the Pull so stay two more teeth.

Finally the Cepot returned to his hometown.
"How is that in the City" said his father the Cepot.
"Glad sir can see her souvenir" two seeds of the tooth.
"Why teeth souvenirs, it's her teeth who" the word live.
"Gigi Cepot's father, see Cepot teeth just one more" said Si Cepot while Piling.
"Gosh Cepot-Cepot" said Daddy.