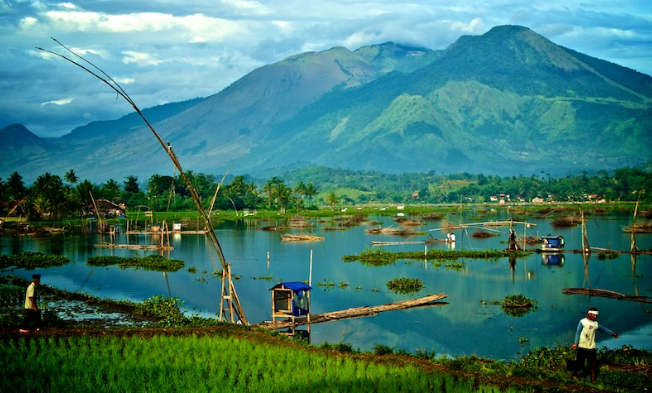 In ancient times north of garut city there is a village whose inhabitants are mostly farmers. Because the land in the village is so fertile and never lacks water, their rice fields always produce abundant rice. But even so, the villagers remain poor in need.

The day was still a little dark and the dew still dangling in the leaves, but the inhabitants had rushed to their fields. Today is the day of harvest. They will reap the yellowing rice and sell it to a middleman named Nyai Endit.

Nyai Endit is the richest man in the village. The house is luxurious, the barn of rice is very wide because it must be enough to accommodate the rice it bought from all the farmers in the village. Yes! All farmers. And not voluntarily the farmers are selling their crops to Nyai Endit. They are forced to sell all their crops for a cheap price if they do not want to look for a case with Endit's guardians. Then if their rice supply runs out, they have to buy from an Endi with an inflated price.

"Wow when will we change fate?" A farmer told his friend. "Can not stand me living like this. Why, God did not punish the moneylender? "
"Sssst, do not kenceng-kenceng atuh, then someone can hear!" Replied his friend. "We must be patient! Later also will come a proper retaliation for people who like to do persuasion in others. God never sleeps! "

While Nyai Endit is checking the barn.
"Barja!" Said nyai Endit. "How? Are all the rice already purchased? "Said nyai Endit.
"Well, yes!" Replied the barge named Barja. "May check the barn Nyi! The barn is full of rice, even some of us still keep it outside because it will not fit anymore. "
"Ha ha ha ha…! Soon they will run out of rice and buy me. I'll get richer !!! Nice! Keep an eye on the peasants, lest they sell their crops elsewhere. Give a lesson to anyone who rebels! "Said Nyai Endit.

Sure enough, a few weeks later the villagers began to run out of food even many who have started to suffer from hunger. While Nyai Endit always feast with luxury foods in his home.
"Oh sir, our rice supplies are running low. Soon we will have to buy rice to Nyai Endit. The next-door neighbor said the price is now five times higher than when we first sold. How ya pack? And we also need to buy other necessities. O Lord, grant us the leniency of the burden we bear. "
That grunts the villagers over the abuse of Nyai Endit.
One hot afternoon, from the edge of the village there was a grandmother who was stooping. He passed the residence with a look of compassion.
"Well, poor people. They suffer only because of one's behavior. Looks like this must end soon, "thought the grandmother.
He walked over to a resident who was pounding rice.
"Nyi! I asked, "said the grandmother.
"Yes nek what is it?" Replied Nyi Asih who was pounding the rice
"Where can I find the richest person in this village?" Asked the grandmother
"Oh, mean the house grandmother Nyi Endit?" Said Nyi Asih. "It's near you. Grandma lives straight until you see the T-junction. Then grandmother turn left. Later grandma will see a very big house. That's his home. Is there any need for a grandmother to Nyi Endit? "
"I want to ask for alms," said the grandmother.
"Ah it's useless to ask the same grandmother, will not be given. If grandma is hungry, grandma can eat at my house, but it is sober, "said Nyi Asih.
"No need," replied the grandmother. "I just want to know his reaction if there are beggars who ask alms. Oh yes, please tell the other residents to get ready for refuge. Because there will soon be a great flood. "
"Grandma joked huh?" Said Nyi Asih startled. "How could there be a flood in the dry season?"
"I'm not kidding," said the grandmother. "I'm the one who will teach Nyi Endit. Then immediately evacuate, bring your valuables, "said the grandmother.
After that the grandmother left Nyi Asih still stunned.

Meanwhile Nyai Endit is enjoying the abundant cuisine, as well as the centengnya. The beggar arrives in front of Nyai Endit's house and is immediately confronted by the centengs.
"Hey old beggar! Get out of here! Do not get this filthy porch on your feet! "Snapped the castle.
"I want to ask for alms. There may be leftovers I can eat. I have not eaten three days, "said the grandmother.
"What do I care," snapped a fist. "Emangnya I'm your father? If you want to eat yes buy do not ask! Get there, get going before I drag! "
But the grandmother did not budge in her place. "Nyai Endit come out! I want to ask for alms. Nyai Endiiiit ...! "Shouted the grandmother.
They tried to drag the screaming grandmother, but to no avail.
"Who the hell is screaming outside," said Nyai Endit. "Do not bother eating!"
"Hey…! Who are you old grandma? Why scream in front of people's house? "Snapped Nyai Endit.
"I just want to ask for a little food because it's been three days I do not eat," said the grandmother.
"Lah..ga eat kok ask me the same? There is no! Get out of here! Later a lot of flies kium baumu, "said Nyai Endit.
The grandmother did not go but instead stuck his stick to the ground and looked at Nyai Endit with anger.
"Hey Endit ..! So far God has given you abundant rijki but you are not grateful. You're stingy! While the villagers starve you instead squander food "shouted the fiery grandmother. "I came here in answer to the prayers of the people who were miserable because of your actions! Now get ready for your punishment. "
"Ha ha ha ... You want to punish me? Nothing wrong? You do not see many centers! Once you hit it, you'll die, "said Nyai Endit.
"No need to bother to get rid of me," said the grandmother. "I'll get out of here if you can pull my wand off the ground."
"You crazy grandmother. What's hard about sticking a stick. Without energy I can! "Said Nyai Endit arrogant.
Then hup! Nyai Endit tried to pull out the stick with one hand. Apparently the stick was not budging. He tried with two hands. Hup hup! Still not budging too.
"Dammit!" Said Nyai Endit. "Centeng! Take out the stick! Watch out if it is not uprooted. Your salary I cut! "
They tried to pull out the grandmother's wand, but despite being pulled by three men, the stick remained unmoved.
"Ha ha ha ... you did not succeed?" Said the grandmother. "It turns out your power is not much. See I'm going to pull out this stick. "
Brut! With one beat, the stick was lifted off the ground. Byuuuuurrr !!!! Suddenly from the scratch marks of the grandmother's wand sprinkled the very swift water.
"Endit! This is a punishment for you! This water is the tears of the people who are miserable because of you. You and all your wealth will be drowned by this water! "
After saying so the grandmother suddenly disappeared somewhere. Nyai Endit's stay panicked to see the water overflowing swiftly. He tried to run to save his property, but the flood more quickly drowned him and his property.

In the village is now formed a beautiful small lake. People named it 'Situ Bagendit'. Situ means lake and Bagendit comes from the word Endit. Some people believe that sometimes we can see a leech as big as a mattress at the bottom of the lake. He said it was the incarnation of Nyai Endit who did not escape from the flood trap.

welcome to steemit have a good time

HI @muhamadrizal429 welcome to steemit from core of my 💓 heart.its nice to see you here steemit is very good plate form and community here you can find good friends of your own desire. I wish you best of luck.
Please follow me For future help and upvotes, resteem
@shahidkha

Welcome to [email protected] my pleasure to see you here.steemit is a very good community here you will enjoy a lot.best of luck for future help and upvotes please follow me.@sohailharoon

Hi, do you want to earn money $$$ while playing a game?