Best Friends For Never.. Eps. One 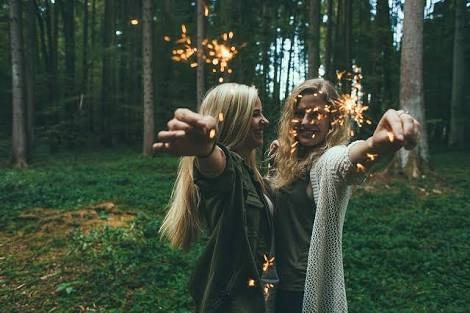 I wanted a best friend, being an only daughter, made me an introvert as my mum wouldn't let me go anywhere, except school and church. I had no friends, and no one visited me... My older brother Adley was a super extrovert and hardly stays home. I didn't know what it felt like to have a sister and I wished my mum could have another child, so I could have a younger one, preferably a girl but my dad wasn't about that life anymore.

Cuddling my pink teddy in bed, and watching teletubbies, I shivered when Tinky-Winky hugged Laa-laa.

I Wished I had a sister to hug me like that..

"Amelia", "Amy" My mum called in her tiniest voice.. That was one of the reasons my dad married her, he usually told her she talks like a singing bird, whenever they are in their romantic mood, curled up in the couch.

My mum always jerked me back to reality from my thoughts. "You good Amelia?" She was worried. I nodded

"You thinking about a sister again?" "You will soon start having an imaginary sister Amy, you need to stop".

At this point, I knew my mum wasn't giving any thoughts to having another child and there was nothing I could do about it. She was 50 already but looked good for her age, my dad was 59.. such gap!

Soon, I was back to school, I was 16 and in twelfth grade.. I hated my school as a junior, because my seniors were bullies but getting to that level, there was no one to send me on errands anymore. They did tell me I was fragile and needed to be stronger.
I remember this senior had once punished me because she wanted to know the name of my body spray and I told her I don't own one. I didn't tell her it was my lotion I put on my wears. She was furious and had to make me kneel for hours that I ended up having bruised knees. I lied to my mum about it and hid them from my dad; I know my parents could sue my school for it.

Towards my final exams, I became friends with Charlotte. She was a random girl trying to be everyone's friend and I used to hate her for that. She was known as the girl that pushes her butt up while walking and a gossip.

We became friends after I was elected a school captain and I had my own room. Badminton was my favorite sport and she often came around to play with me. I had two other close friends, Paige and Zoe.

Paige was my favorite, and she told everyone I was her best friend. She became jealous of my friendship with Charlotte and accused me of having feelings for her.. How gross!

Zoe never bothered much. She was that girl that wouldn't mind having a circle of best friends, She always joined me and Charlotte to study while Paige started keeping her distance.

One night, I came back from evening class with Zoe to see a notice on my door "Amelia, stop having multiple girlfriends. You either pick between me, Charlotte or Zoe". There was a signature under, I recognized it... Arrrrgghh! I never knew she was that crazy, I bit my lips, something I do when I'm angry and about to be violent. Zoe knew about that and she ran after me asking me to calm down.

In less than a second, I was in Paige's dorm. I wanted to fight, but Zoe stopped me and we stood there arguing about letting go as dorm mates started whispering and coming around... How I dislike creating a scene. Paige stood from her bed, wore her flip flops, shuffled past us, hissed and whistled to the door. Such a nasty b*tch! I thought..

My friendship with Paige went sour and I stopped giving her gifts.

I started paying less attention to what was said about Charlotte. I knew she just trying to be one of the popular girls. She was free with me, and oftentimes slept in my room, wore my house robe that looked like a kimono and ate with me.
She was my friend but not my best friend yet. No one was my best friend.

The next morning, at 5 a.m, I woke up to shower and prepare for school and as I opened my door, I stepped on something watery. I wake up earlier since I take a lot of time to dress up and breakfast is by 6.30 a.m, I wanted to meet up. I still had sleepy eyes and I thought I must have stepped on water until a foul smell filled the air and I soon realized it was coming from my feet.........

Someone having diarrhea had taken a dump in front of my door! Arrrrgghhh!!!!