the story of Ram

Rama was born on the ninth day of the lunar month Chaitra (March–April), a day celebrated across India as Ram Navami. This coincides with one of the four Navratri on the Hindu calendar, in the spring season, namely the Vasantha Navratri. 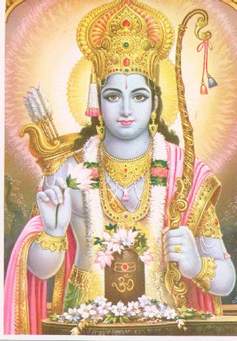 The ancient epic Ramayana states in the Balakhanda that Rama and his brothers were born to Kaushalya and Dasharatha in Ayodhya, a city on the banks of Sarayu River.Dasharatha was the king of Kosala, and a part of the solar dynasty of Iksvakus. His mother's name Kaushalya literally implies that she was from Kosala. The kingdom of Kosala is also mentioned in Buddhist and Jaina texts, as one of the sixteen Maha janapadas of ancient India, and as an important center of pilgrimage for Jains and Buddhists.
Rama had three brothers, according to the Balakhanda section of the Ramayana. These were Lakshmana, Bharata and Shatrughna.The extant manuscripts of the text describes their education and training as young princes, but this is brief. Rama is portrayed as a polite, self-controlled, virtuous youth always ready to help others. His education included the Vedas, the Vedangas as well as the martial arts.The years when Rama grew up is described in much greater detail by later Hindu texts, such as the Ramavali by Tulsidas. The template is similar to those found for Krishna, but in the poems of Tulsidas, Rama is milder and reserved introvert, rather than prank-playing extrovert personality of Krishna. The Ramayana mentions an archery contest organized by King Janaka, where Sita and Rama meet. Rama wins the contest by breaking Lord Shiva's bow.and Janaka agrees to the marriage of Sita and Rama. Sita moves with Rama to his father Dashratha's capital. Sita introduces Rama's brothers to her sister and her two cousins, and they all get married.
image:

While Rama and his brothers were away, Kaikeyi, the mother of Bharata and the second wife of king Dasharatha, reminds the king that he had promised long ago to comply with one thing she asks, anything. Dasharatha remembers and agrees to do so. She demands that Rama be exiled for fourteen years to Dandaka forest.Dasharatha grieves at her request. Her son Bharata, and other family members become upset at her demand. Rama states that his father should keep his word, adds that he does not crave for earthly or heavenly material pleasures, neither seeks power nor anything else. He talks about his decision with his wife and tells everyone that time passes quickly. Sita leaves with him to live in the forest, the brother Lakshmana joins them in their exile as the caring close brother.
Rama heads outside the Kosala kingdom, crosses Yamuna river and initially stays at Chitrakuta, on the banks of river Mandakini, in the hermitage of sage .This place is believed in the Hindu tradition to be the same as Chitrakoot on the border of Uttar Pradesh and Madhya Pradesh. The region has numerous Rama temples and is an important Vaishnava pilgrimage site.The texts describe nearby hermitages of Vedic rishis (sages) such as Atri, and that Rama roamed through forests, lived a humble simple life, provided protection and relief to ascetics in the forest being harassed and persecuted by demons, as they stayed at different ashrams.After ten years of wandering and struggles, Rama arrives at Panchavati, on the banks of river Godavari. This region had numerous demons (rakshasha). One day, a demoness called Shurpanakha saw Rama, became enamored of him, and tried to seduce him.
Rama refused her. Shurpanakha retaliated by threatening Sita. Lakshmana, the younger brother protective of his family, in turn retaliated by cutting off the nose and ears of Shurpanakha. The cycle of violence escalated, ultimately reaching demon king Ravana, who was the brother of Shurpanakha. Ravana comes to Panchavati to take revenge on behalf of his family, sees Sita, gets attracted, and kidnaps Sita to his kingdom of Lanka (believed to be modern Sri Lanka).
image:

Rama and Lakshmana discover the kidnapping, worry about Sita's safety, despair at the loss and their lack of resources to take on Ravana. Their struggles now reach their heights. They travel south, meet Sugriva, marshall an army of monkeys, and attract dedicated commanders such as Hanuman who is a minister of Sugriva.Meanwhile, Ravana harasses Sita and tries to make her into a concubine. Sita refuses him. Ravana is enraged. Rama ultimately reaches Lanka, fights in a war that has many ups and downs, but ultimately prevails, kills Ravana and forces of evil, and rescues his wife Sita. They return to Ayodhya.
image: